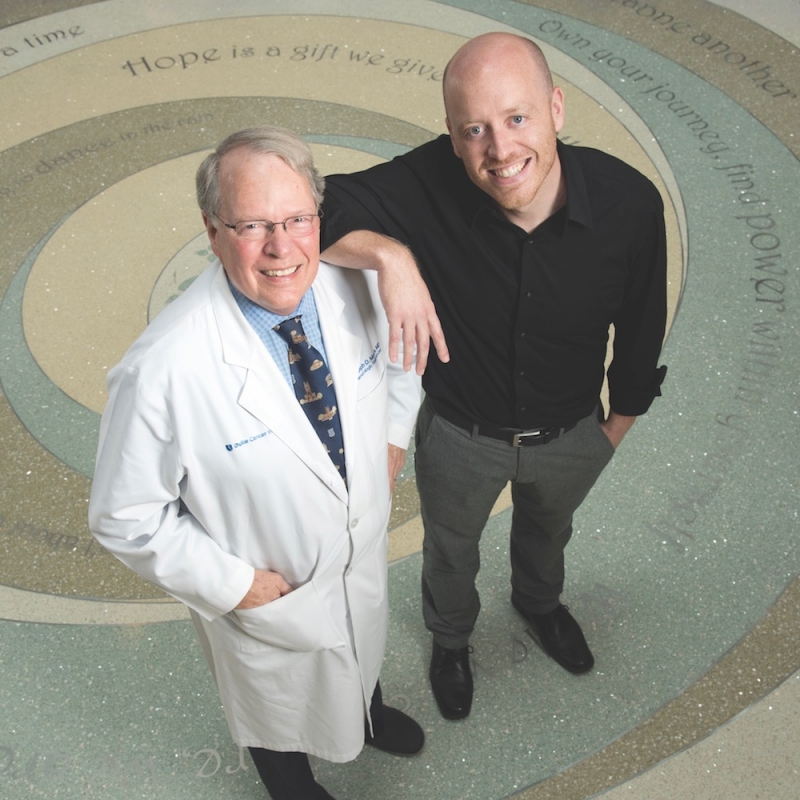 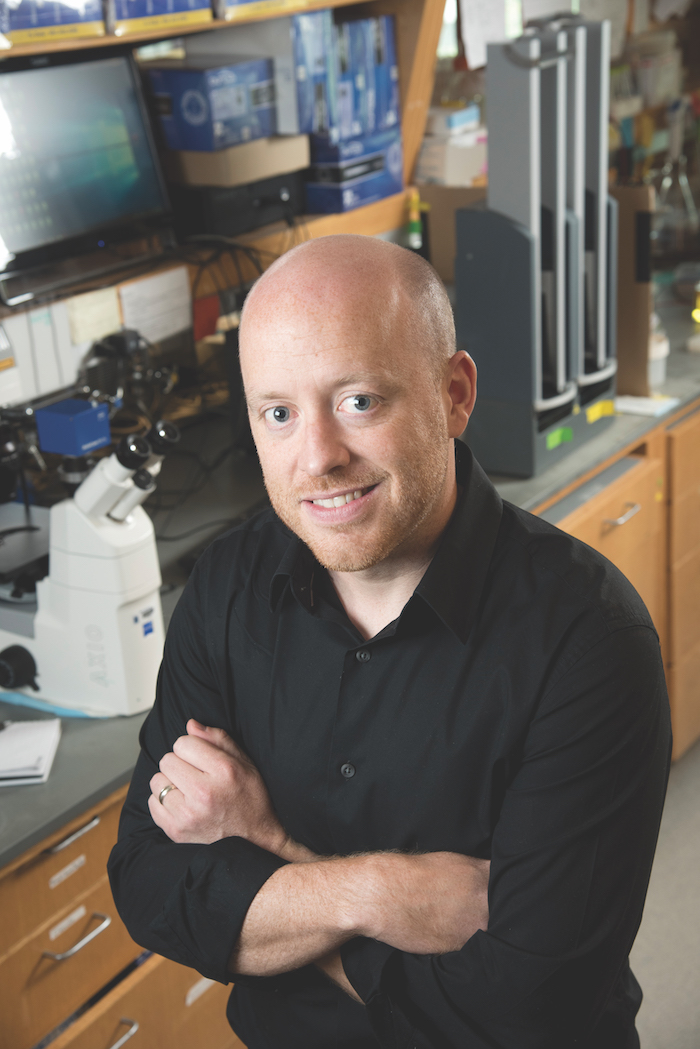 Kris Wood, PhD, today in the lab. Kris Wood, PhD, had been going full tilt for more than six months, ever since he’d been hired to the faculty in the Department of Pharmacology and Cancer Biology at Duke. He was working 12 stressful hours a day, adjusting to a new place, getting his lab up and running, training his research assistants, living on coffee. It was no surprise, he thought, that he felt exhausted and short of breath all the time.

But it kept getting worse. Finally, thinking he might have walking pneumonia, Wood went to a Duke clinic near his home in south Durham, where a doctor examined him and took a chest X-ray. When the doctor got the film back, he walked into the exam room and closed the door.

“He held the x-ray up in front of me,” recalls Wood. “He said ‘Kris, this is your heart; it looks fine. These are your lungs; those look fine too. Then he pointed to this cloudy shape in the middle and said, ‘But this? I don’t know what that is. But it is not good.’”

He was right. The mass, directly behind Wood’s sternum, turned out to be a rare type of non-Hodgkin’s lymphoma, a blood cancer.

More than most patients, Wood knew what he was up against. He has devoted his professional life to studying cancer, especially seeking to unlock the secrets of cancer’s pernicious ability to thwart the drugs we use to try to kill it.

In the case of the type of non-Hodgkin’s lymphoma that Wood had, we are winning that race; the standard therapy is extremely effective.

“Thirty or forty years ago, this type of lymphoma would have had a bad prognosis,” Wood says. “Now, you get treated, and the overwhelming majority of people are cured.”

The Duke community rallied to Wood’s side— members of his department and lab staff even shaved their heads in solidarity when chemotherapy temporarily cost him his hair—and under the expert care of Joseph Moore, MD, Wood received swift and effective treatment.

“Dr. Moore had an extraordinary impact on my life,” says Wood. “Not only did he give me the therapy that cured me, he also cared for me in every sense:  he gave me confidence and calmed my fears. He’s a brilliant physician, a real gem here at Duke.”

“In one sense, the experience didn’t really change how I feel about my work,” Wood says. “I always thought cancer was important. That’s why I study it. But my getting sick did bring it home to me. The therapy I received is the product of decades of research. And the research we do today will help somebody else with some other type of cancer down the line. I tend to be very optimistic about our chances. If I weren’t, I wouldn’t come to work every day.” 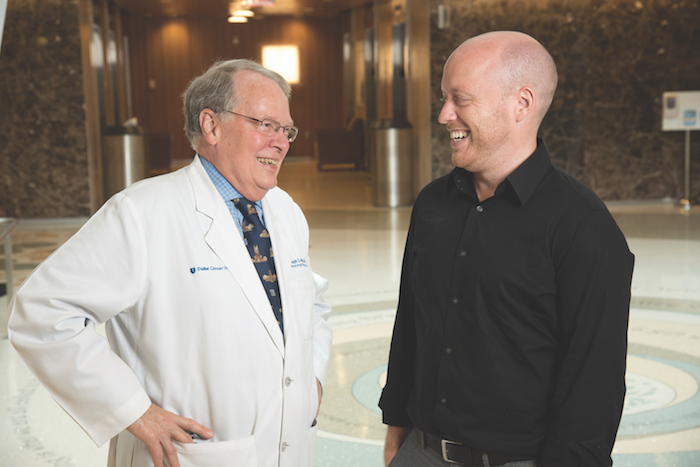 Joseph Moore, MD, (left) treated researcher Kris Wood for non-Hodgkin’s lymphoma.Wood’s research focuses on cancer resistance: the ability of cancer cells to activate effective biochemical defenses to protect themselves from the drugs we use to fight them.

“We have drugs that, in principle, should kill many cancers,” Wood says. “But in practice, they don’t. That’s resistance. I would argue that it’s as big a problem as any in cancer. Because if we could figure out what the cancer cells are doing to stay alive in the face of drugs that should kill them, then we could target those mechanisms. And then all of a sudden a drug that’s currently pretty paltry would become one that’s super potent.”

In general, resistance happens by means of biochemical signaling pathways. Faced with an attack by anti-cancer drugs, certain molecules within cancer cells perform chemical reactions that activate other molecules to do the same, and so on down the line. The result is a complex chemical defense that enables cancer cells to overcome the toxic effects of drugs.

Resistance might not be such a difficult problem if a particular cancer deployed its defenses by activating only one or two signaling pathways: figure out how to block that pathway, and you overcome the cancer’s resistance.

But in many cases, tumors employ a great many resistance pathways, each with a distinctive molecular mechanism. Trying to identify, characterize, and develop successful countermeasures to block each unique pathway is daunting almost to the point of futility.

“Even if you block one pathway, others will emerge,” Wood says. “It’s like a game of whack-a-mole, and there are just too many moles.” 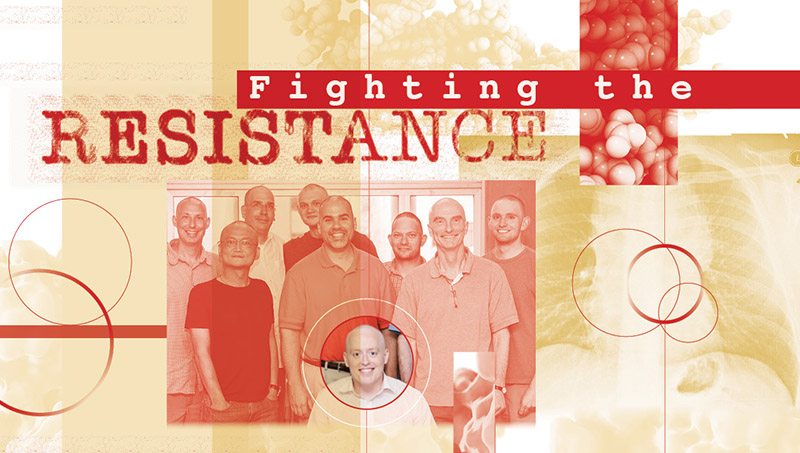 Wood’s lab analyzes very large sets of data to systematically identify and characterize the pathways of resistance, using a host of genomic, computational, and biochemical techniques.

“We throw everything at it,” he says.

And in doing so, they’ve discovered a possible solution to the whack-a-mole problem. Rather than isolate and block each pathway of resistance, Wood and his lab have homed in on the shared features of all those pathways. Successfully find and target a crucial common factor, and you might be able to clamp a lid over all the mole holes at once.

“We’ve found that in many cases the pathways of resistance funnel down to a common biological program,” Wood says. “By blocking that program, you should be able to block the emergence of resistance.”

Most recently, Wood has focused on resistance in a common type of melanoma characterized by a mutation in a gene called BRAF. In these cases—which constitute about half of all melanomas—patients often initially respond well to treatment with BRAF pathway-inhibiting drugs. But very often, resistance emerges, driven by a whole series of different pathways, slowing and then completely reversing the effectiveness of treatment.

Wood and his lab have recently discovered that although many pathways can individually drive resistance to BRAF inhibitors, they all converge on a single gene, called MYC. Working in cell lines and mouse models, he has shown that administering a drug that blocks the activity of the MYC protein produced by the gene can prevent and even reverse resistance.

From Engineer To Card-Carrying Biologist

Wood came to cancer biology, and to biomedicine in general, by a somewhat unorthodox route: engineering. He grew up on his grandfather’s farm in Kentucky without any exposure to academic science, but as a kid he loved math, and as an undergraduate at the University of Kentucky he displayed a distinct talent for chemistry.

“My hope was that I could eventually combine my engineering mindset with the knowledge of basic biology to innovate in ways that other people weren’t, because the engineers were working on engineering problems and the biologists were working on biology problems,” he says. “But toward the end of my PhD, I realized that I didn’t know enough basic biology to really innovate as a cancer researcher.”

So he spent five years as a National Institutes of Health postdoctoral fellow in a basic biology lab at the Whitehead Institute for Biomedical Research and the Broad Institute of Harvard and MIT. Then, as “a card-carrying biologist,” he came to Duke in 2012.

“Duke was crazy enough to hire an engineer to work in a biology department,” he says. “At the end of the day, although my career path went a bit off the usual track, I’m happy I did it that way. I can apply a systematic engineering mindset to really important questions in biomedicine and cancer.” 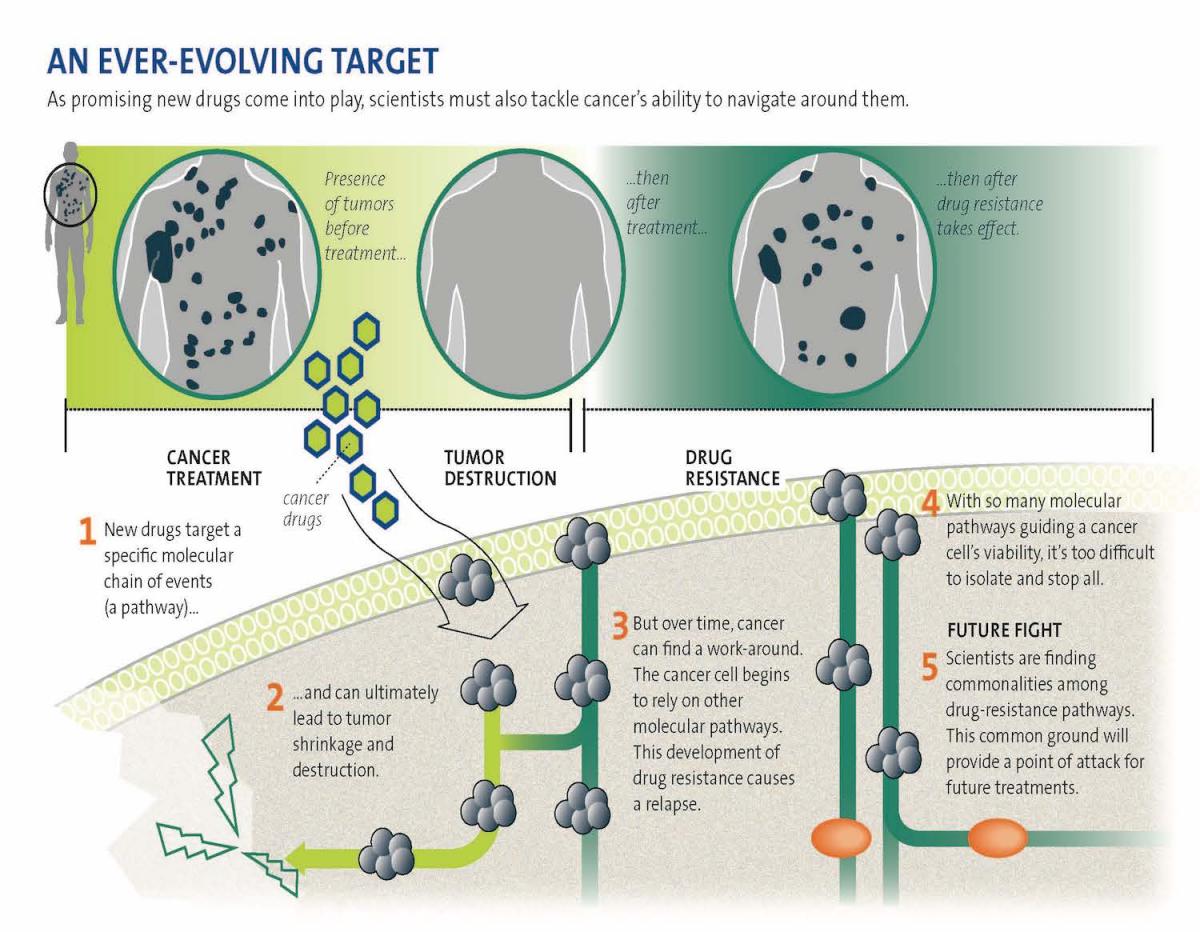 Everything Wood has seen in his field leaves him optimistic that the outlook is positive in the fight against cancer.

“Ultimately, we are working toward a future where cancers that kill people now can be managed so that people can live years and years with them, and in some cases even be cured,” he says. “Where will that progress come from? It’ll come from people like me who figure out how resistance works and how to overcome it. It will come from people who are developing entirely new types of drugs and therapeutic modalities. It will come from people who create early detection techniques that allow you to find the cancer early enough that you can remove it with a scalpel. It’s going to be a combination of all these things. And we as a community are making enormous progress on all these fronts. That’s why I can say with confidence that the future looks bright.”

Kris Wood is an assistant professor of pharmacology and cancer biology in the Duke University School of Medicine. Joseph Moore is a professor of medicine.

Join the fight against cancer: To give, visit DCI Development.