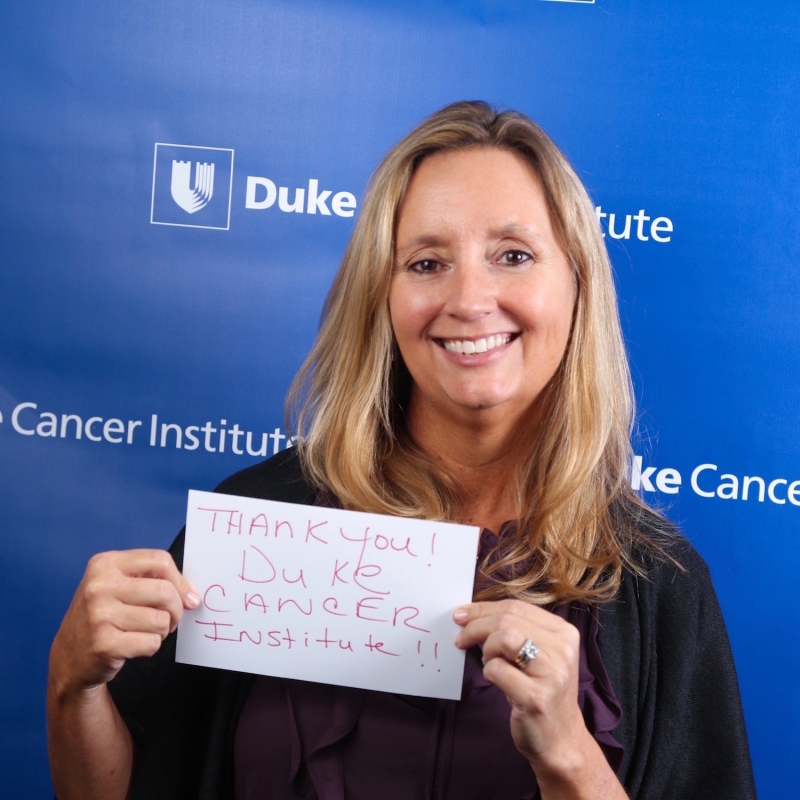 In December two years ago, heating-and-air-conditioning repairman Jack Walker decided to stop for gas on his way to a Rotary Club meeting. The decision may have saved his life.

Tina Escalona, a 51-year-old healthcare marketer, was staring up at the sky, nozzle in hand, when Walker first approached the gas pump across from her on that fateful day in Greenwood, South Carolina. The two strangers nodded hello.

“The sky was especially beautiful to me,” remembers Escalona.

“She remarked that the sky was really blue,” recounted Walker.

“Then he said, ‘Beautiful day, isn’t it’,” said Escalona, “and I said, ‘Every day we’re alive is a beautiful day. I’m a cancer survivor,’ which was unusual because that’s not something I normally said; it just popped out of my mouth.”

“Ma’am, I was just diagnosed with cancer!” Walker, surprised, told her.

Escalona responded, “Well, I have to come over and give you a hug.” He said, “Come on over.”

The two chit-chatted about their churches and talked about getting together for coffee. He gave her his wife’s business card in case she wanted to get in touch. She did.

“I felt compelled — I believe by God — to reach out to Jack’s wife, Bea, that very week,” recalled Escalona, who learned from Bea that Jack had stage 3 rectal cancer. Since Escalona was a survivor of that very cancer, she recommended Walker see her surgeon Christopher Mantyh, MD, part of her “dream team” with medical oncologist David Hsu, MD, PhD.  She explained how her local doctor, who’d trained at Duke, had first referred her to Mantyh in fall 2012. She’d had stage 2 rectal cancer. She had surgery on her 46th birthday. No chemotherapy or radiation treatment was needed, and she was declared NED (no evidence of disease) at her first follow-up. 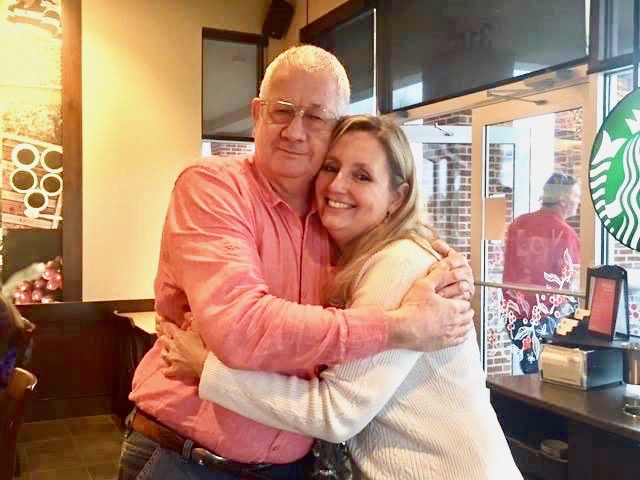 Friends Jack Walker and Tina Escalona, often meet up for coffee. They have supported each other through their cancer journeys and believe it's their mission to help others with the disease.Walker didn’t need any more convincing. He got a referral from his local oncologist to see Mantyh. Within a week of meeting Escalona, he had an appointment. He would undergo six weeks of chemotherapy and radiation, seven and a half hours of surgery, and five more months of chemotherapy before being declared cancer-free himself.

“God has a plan,” said Walker. “Everyone at Duke was wonderful and took great care of me, and Tina became my angel. We thank God for sending her our way on a path for total healing.”

“None of us believe that our ‘random’ connection was random at all,” said Escalona, agreeing that their meeting was divinely inspired.

Escalona, 12 years younger than Walker, was fairly young when she was diagnosed with rectal cancer. The average age of diagnosis for women is 72 years old. She didn’t have a family history of the disease and led a healthy and active lifestyle; playing competitive tennis, hiking, working out at the gym, and chasing after two dogs and three cats on the 12-acre farm and homestead in Greenwood she shared with her husband — when she wasn’t criss-crossing the country for work.

So when faced with recurrent bleeding issues and even a recommendation by her doctor to get a colonoscopy, she’d put it off for nearly a year, thinking it was nothing serious, until her husband George insisted.

“It was very powerful,” said Escalona. “I saw it not long before I myself was diagnosed and it was extremely frightening to see how hard she fought and what a toll it took on her.”

At her latest monitoring appointment, in February, there were continuing indications of “problematic bloodwork” and she was asked to come back in April for additional tests and scans. The technician taking her blood wrapped a pair of Mardi Gras beads around her neck and gave her “a great hug.”

“The only issue was no one was giving out free margaritas,” Escalona laughed, then addressed the seriousness of the situation. “A big part of my love for Duke is that they don’t abandon you after initial treatment, but continue aggressive monitoring in order to detect any potential recurrence as early as possible. I know I’m in capable hands, but I’m always looking over my shoulder for a recurrence.”

Escalona is committed to helping raise awareness about colorectal cancer, in her own small community. She and the Walkers, now good friends, share information and offer prayers and emotional support to those who cross their paths. They also spread the word about the care they received at Duke.

She hopes they can find a way to help other local patients get access to Duke. Between gas and hotels, travel costs can add up.

“I hope at some point that I can do something for people who don’t have the resources to get to Duke for treatment, because we believe firmly that that’s why we’re still here,” said Escalona. “We live in a region where we don’t have the quality care that Duke can provide. It’s a five-hour drive away, but it’s a five-hour drive that’s worth it with our type of cancer. There’s just no price for that kind of expertise. Dr. Mantyh’s a rock star and he should be paid like Steven Tyler (of Aerosmith). If I win the lottery, I’m going to build a Mantyh-Hsu wing of Duke Cancer Center.”

“I never wanted any sympathy for my condition,” continued Escalona. “I came out of the gate wanting to be an advocate, to help people, and I’m looking forward to the day when we finally have the cure we’re all praying for.”

Escalona plans to participate, for the first time, in the annual CRUSH Colorectal Cancer 5K Run/Walk hosted by the Duke Multidisciplinary Gastrointestinal Cancers Program — that raises funds for colorectal cancer research at Duke. She and her husband have joined team TushTush, captained by an 11-year colon cancer survivor who works in Duke Cancer Institute's IT department. The event will be held on Saturday, March 24, at Northgate Mall in Durham.