#MyDukeCancerStory: A Life In Service To Others 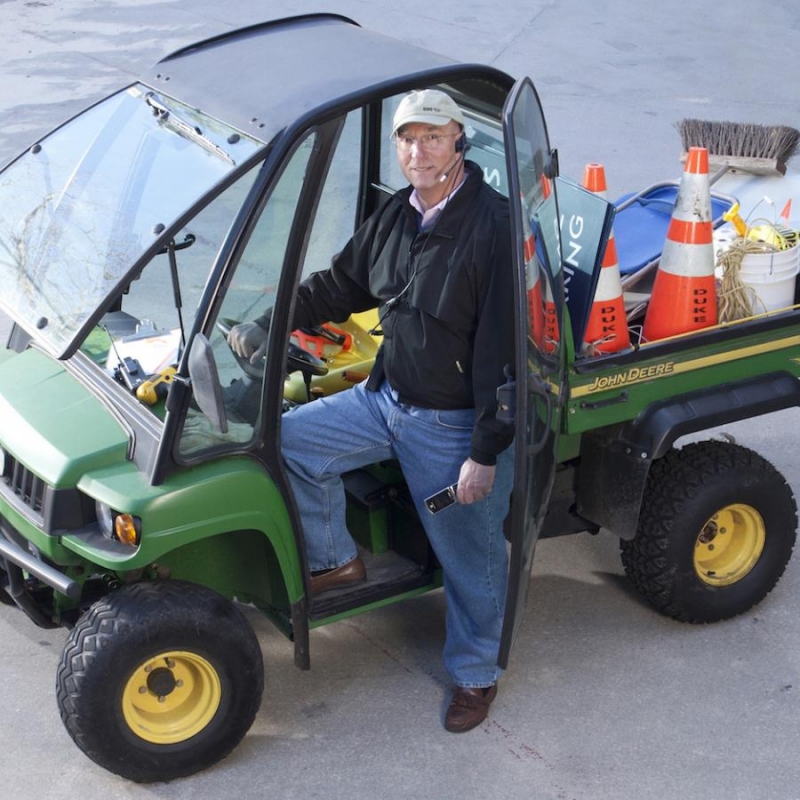 Plenty busy with fishing, golfing and grandchildren, Jim Slaughter, a Duke retiree, doesn’t just volunteer because he has the time; he volunteers because, as they say, he has the heart.

Diagnosed the day after Christmas 2013 with stage 4 small bowel cancer, Slaughter knows first-hand the challenges, both physical and emotional, associated with oncology care.

“When cancer got my attention, I figured that 42 years of service was enough,” recalled Slaughter.

His career had included managing housekeeping, directing the student labor pool, and overseeing the Bryan University Center facilities and Special Event Services. A jack of all trades, Slaughter had handled logistics for two presidential visits, an untold number of football and basketball games, and rock acts like the Grateful Dead (four times), Joni Mitchell, and Earth, Wind & Fire. 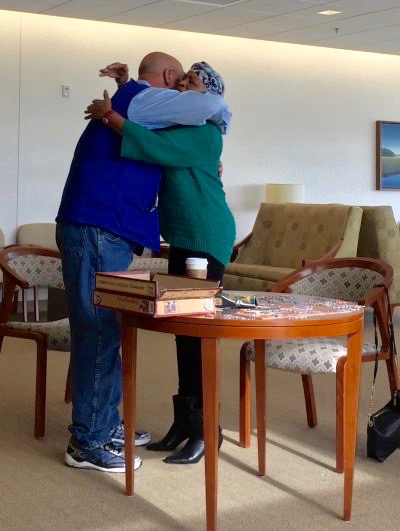 Cancer center volunteer Jim Slaughter hugs pancreatic cancer patient Jean Spencer. They first met when they were both patients in 2014. (photo taken Nov. 2016)“I wanted to see the volunteers I’d made friends with in the clinic when I was getting chemo,” Slaughter said. “They had made it so much easier for me and my family when I was here, the least I could do was give back.”

Slaughter, 68, is no stranger to the oncology treatment floor, where he spends four hours a week greeting patients with hot cocoa, warm blankets and often, a hug.

He lets everyone he meets know that he’s also a patient. He said it helps him communicate better with patients when they know that he knows what it’s like. He checks up on them and they check up on him, like when his doctor discovered then treated him for a cancerous lymph node a few months after he started volunteering.

“We probably get more out of this than the patients, isn’t that right,” quipped Slaughter, grabbing a coffee with a fellow volunteer.

Not even an icy storm early last year could keep Slaughter away from the place where everybody seems to know his name. He got into his four-wheel-drive and reported for duty.

Recently Slaughter had a PET scan following some abnormal bloodwork.

“They didn’t find anything, but we’ve now got some other things to check out,” he said. “Somebody asked, ‘well, you still going to volunteer,’. I’m like ‘yeah, why not?’ I like to get the attention off myself, and get out and help others. As one lady told me, ‘you know, God’s not through with you yet, Jim; that’s the deal.’”

CIRCLE PHOTO (top): Jim Slaughter, manager, Special Event Services at Duke, with his John Deere Gator and a sample of items that he used in the course of his job. (photo by Les Todd, taken before Slaughter retired)