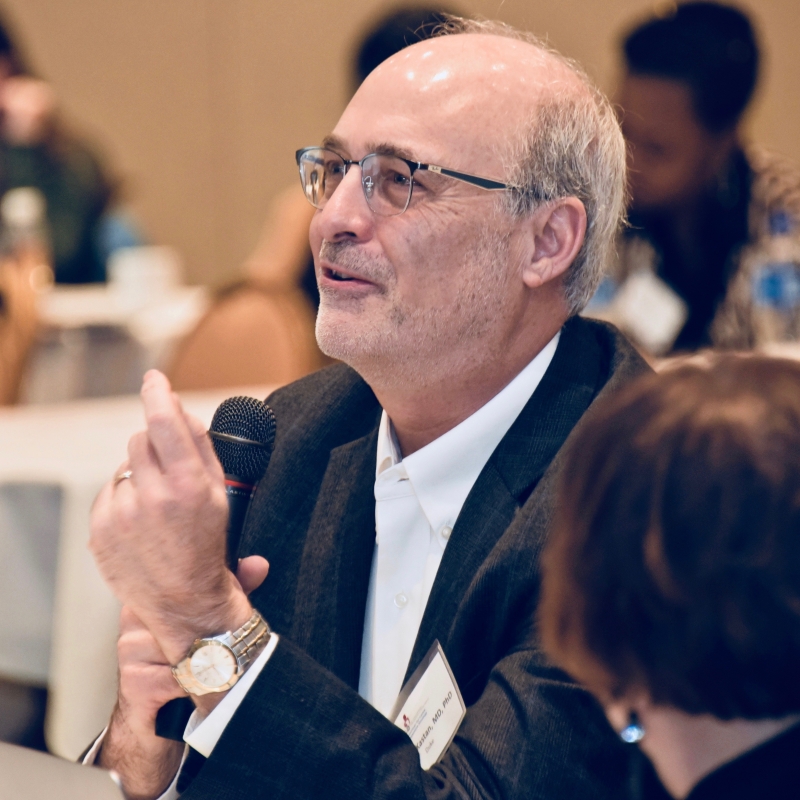 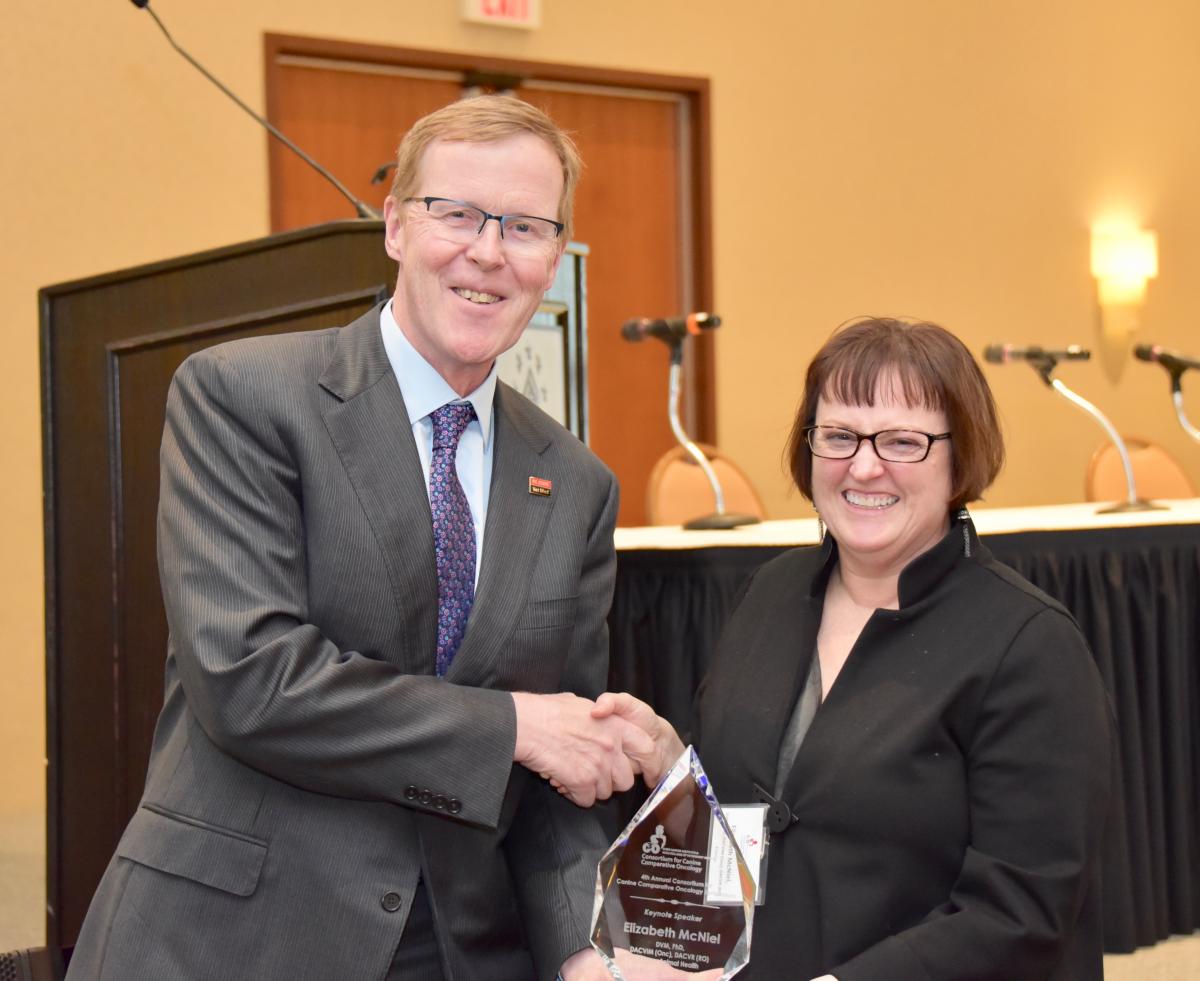 While there have been many successes with newer chemotherapies, targeted therapies, and immunotherapies, many cancer types in the human population don’t respond well to therapy. Of those disease types that do, the short-term and long-term toxicities to the body can be quite significant.

There’s a great need for new cancer therapies that work better and are less toxic. However, the process of developing new cancer drugs is challenging, slow and costly. Even after the scientific discovery phase, it takes more than a decade plus at least $2 billion to bring a therapeutic to the marketplace, provided it works.

In thinking about these challenges, Duke Cancer Institute formed a preclinical and clinical research partnership four years ago with North Carolina State University’s College of Veterinary Medicine — the Consortium for Canine Comparative Oncology (C3O) — to help advance understanding of cancer biology and cancer causation in both species and in doing so, come up with better treatments.

“We’re all here to think about how best to diagnose, prevent and treat cancer,” said executive director of Duke Cancer Institute and co-director of C3O, Michael Kastan, MD, PhD, kicking off the consortium’s fourth annual symposium, on February 15, that brought together researchers, oncologists, veterinarians, philanthropists, government and industry representatives. “That’s our goal in the human population. That’s our goal in the canine population for this partnership.”

Cancer is common in both humans and canines. About 1.7 million Americans and more than 4 million dogs will be diagnosed with cancer this year. About a million of those dogs will undergo some sort of therapeutic intervention.

“A lot of canine breeds have a high susceptibility to certain types of cancer,” explained Kastan. “Many of our advances in cancer biology have come from studying high frequency human cancers and we want to be able to take advantage of that in the canine population as well.” 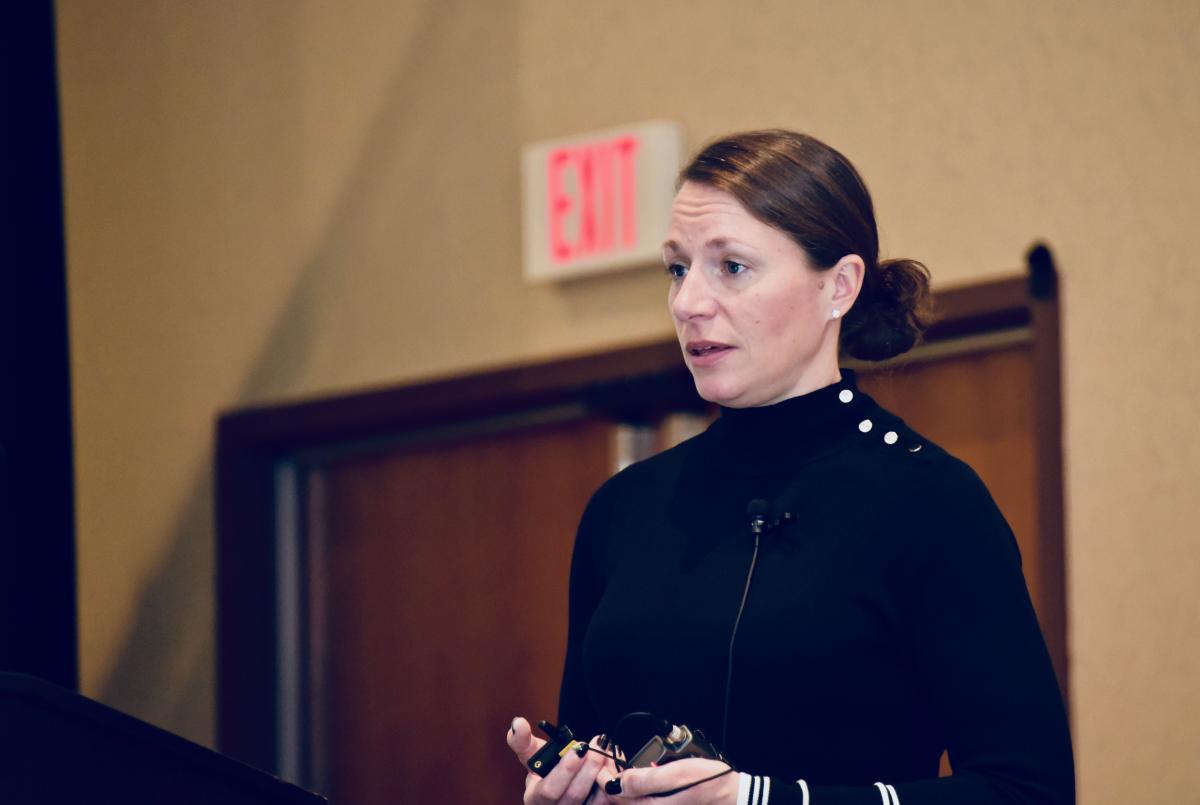 “We have to continue to maintain really high standards for the clinical trial activities that we employ and continue to deploy canine specific reagents and correlative assays, biologic datasets that really help enhance and support trial efforts,” said Amy Leblanc, DVM, director of the Comparative Oncology Program (COP) at the National Cancer Institute’s Center for Cancer Research.Dogs and humans live in the same environment, sharing the air, water and sometimes food. Tumors that spontaneously develop in pet dogs share many characteristics with human tumors. Studying dogs that have cancer presents the opportunity to identify cancer susceptibility genes (biomarkers) that the two may have in common, and in so doing identify potential targets for individual drugs and drug combinations that will benefit both species.

One of the reasons why many drug candidates developed in the lab have gone on to fail in human clinical trials, is because traditional mouse models often lack key characteristics of human cancers. The complex biology of cancer recurrence and metastasis doesn’t work quite the same way in mice, as it does in dogs and humans.

Three research projects of the four funded with C3O pilot project grants this past year were canine studies related to drug development. Project investigators presented updates on their projects, which included promising findings as well as challenges.

Two investigators, orthopedic surgical oncologist and veterinary oncologist William Eward, MD, DVM and NC State veterinarian Steven Suter, DVM, PhD, are currently trialing, with patient dogs, two new therapeutics for osteosarcoma — one a new prodrug nanoparticle formulation of niclosamide (an old drug used to treat tapeworm), and the other, the proteasome inhibitor bortezomib, an old drug being trialed for a new indication. The latter project, in phase two of a mouse-to-dog-to human pipeline, is in its third year of C3O funding.

Chair of the Department of Biomedical Engineering at Duke Ashutosh Chilkoti, PhD, and Suter (NC State), also recieved funding for a third year for their project, which is investigating a new formulation (CP-DOX) of an old chemotherapy drug (doxorubicin) for treating dogs with high-grade B-cell lymphoma. They've been measuring drug toxicity and dosing in research animals before they move to pets with cancer. 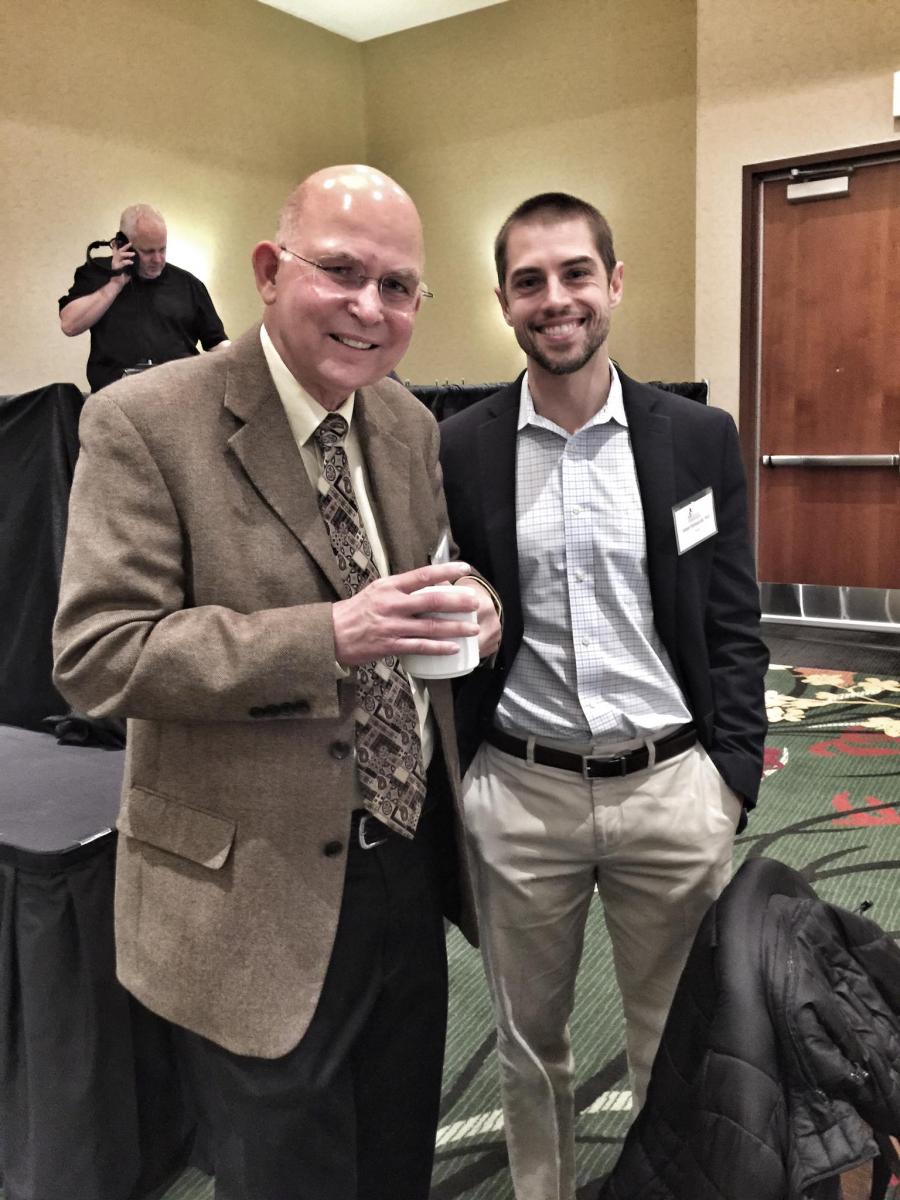 Every grade of human gliomas (80 percent of which are malignant) researchers have found, is recapitulated in the dog, and they’re universally lethal in dogs and humans.

Radiotherapy and to some extent chemotherapy options exist for those dogs whose tumors are detected early enough to treat. However, most systemic therapies in dogs, as in humans, have trouble breaching the blood-brain barrier, and if they do, are non-specific for the tumor with toxic side-effects.

Now, thanks to a donation of equipment and software by two companies, facilitated by Duke, NC State will be the only veterinary institution in the world with the capacity to perform laser ablation surgery (LITT) on canines, a minimally invasive procedure that Duke’s nationally known for in the human space. Fecci and Mariani believe their canine work will provide a new opportunity to expand and perfect this technology that not only zaps the tumors but has the potential to help deliver immunotherapies and chemotherapies to the brain more effectively.

The creators of an emerging Comparative Brain Tumor Consortium (CBTC) within the Comparative Oncology Program (COP) at the National Cancer Institute’s Center for Cancer Research have also taken notice of opportunities to advance brain tumor science in both species.

The director of the COP, Amy Leblanc, DVM, unveiled these plans, telling symposium goers that the CBTC will focus on pathology and molecular markers (where there are some similarities between species), drug discovery, tumor biology and immunology, clinical trials and patient outcomes in canine gliomas.

She also drew attention to the work of the 22-member NCI Comparative Oncology Trials Consortium (COTC) that includes NC State — a resource that has already helped advance the development of drugs to treat melanoma and osteosarcoma.

“I think from our perspective, what lies ahead is a continued emphasis and need to continue a scientific dialogue about where dog data fits and where it can be applicable and strategically placed to advanced concepts for humans, but also garner some benefits back to the dog patients that we work with,” said LeBlanc.

LeBlanc’s colleague Toby Hecht, PhD, who serves as deputy director of the NCI Division of Cancer Treatment and Diagnosis, drove home the importance of dog data. The NCI is creating a publicly accessible canine database as an interoperable node within the larger NCI Cancer Research Data Commons that when completed, will contain a full genotype and phenotype characterization of all the major canine tumors (and also normal tissues) including tumor mutational burden and neoantigens; a description of the tumor microenvironment including numbers and types of subsets of immune and other cells; and clinical data from the COTC and other canine cancer trials (including images). 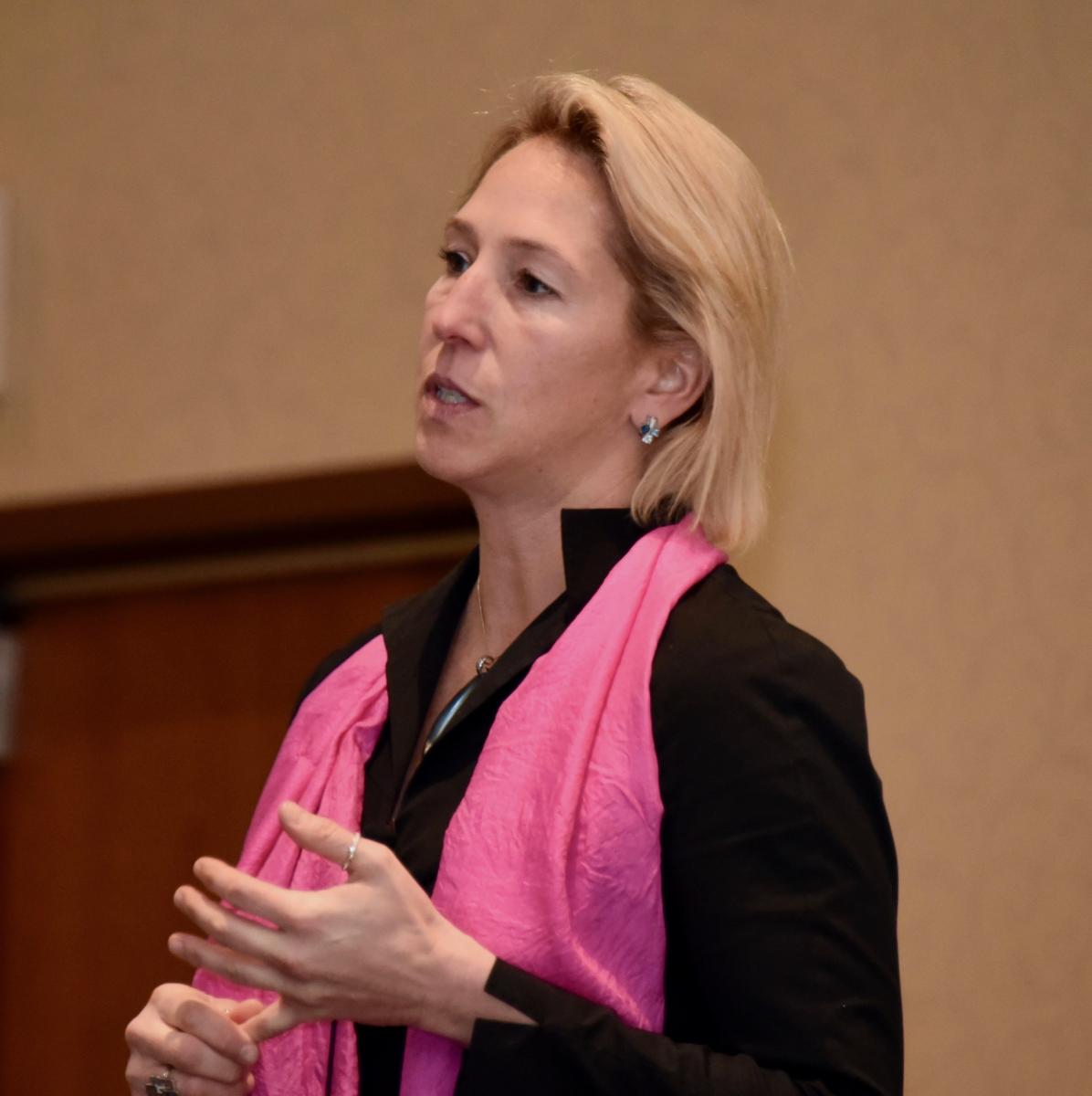 Veterinary pathologist Tanja Zabka, DVM, DACVP, with the comparative oncology team at Genentech, said over 70 percent of the world's pharmaceuticals come from emerging companies and 43 percent of those companies partner with large pharma -- forty percent of which are for cancer drugs.While lauding the successful collaborations that C3O enjoys with NCI, Kastan said that coordinating canine and human clinical trials will also require partnerships with pharma and biotech companies, “that will lead to better informed clinical trials, new insights into cancer biology and hopefully faster and less costly drug approvals.”

Veterinary pathologist Tanja Zabka, DVM, DACVP, with the comparative oncology team at Genentech, presented a reality check as to the extent of opportunities for such partnerships.

“Patient outcome is a very weak outcome for us in clinical trials,” said Zabka. “We focus much more on the biology and pathway engagements so that we can make better decisions…It’s important to make sure that those antibodies (that work in dogs) are going to engage their targets in the same way in people.”

The canine-to-human drug therapy pipeline is increasingly not being driven by big pharma, she explained, which finds early investment risky.

“You’re going to have to be faster,” she said. “The data has to be timely, robust and valid and you’re going to want to engage with these other (emerging) companies because they’re now driving the science and we acquire it later.”

Zabka was joined in a separate session by representatives from Lumicell, Shattuck Labs, and Merck, as well as Bryan Baines Office of Licensing and Ventures, Duke University. The interactive industry panel discussion further engaged C30 attendees on some of the process, cost and legal/ownership challenges to partnering with big pharma and biotech, and avenues of opportunity with open science forums.

“I get pushback from my colleagues about using the dog as a model,” said Mohamad Morsey, DVM, PhD, executive director at Merck Animal Health. “We need to get them on board and get them to understand the potential for this. If they felt that there was a real pot of gold at the end of this — a time savings, a financial savings associated with this work, then they would contribute.”

Suter, a veterinarian and co-investigator on three C30 funded pilot projects, spoke out about how the money issue “rears its ugly head almost every day on the clinic floor.”

“Most of the monoclonal antibodies out there cost between $25,000 and $50,000 per dose; the drugs are way too expensive for our clients,” said Suter. “They would never make it in the veterinary space unless they were given orphan drug status or a company had a way to supply the drug at a cheaper cost.”

Symposium keynote speaker Elizabeth McNiel, DVM, PhD, DACVIM, DACVR, principal research scientist at Elanco Animal Health, offered up the potential for academic researchers to engage a new partner in comparative biomedical research — animal pharma. (Elanco was formerly the animal health business of Eli Lilly and Company) The rationale for ELANCO to invest in oncology research, she said, is “a win for science;” an increased understanding of the disease entities.

Oncology has not traditionally been a big area of focus for most animal health companies, largely due to perceptions that it’s a small market.

“I’m hoping that will change,” said McNiel. “Most of us that have treated animals with cancer for years really see a much larger potential in that market. I think we can address many of those issues of cost.” 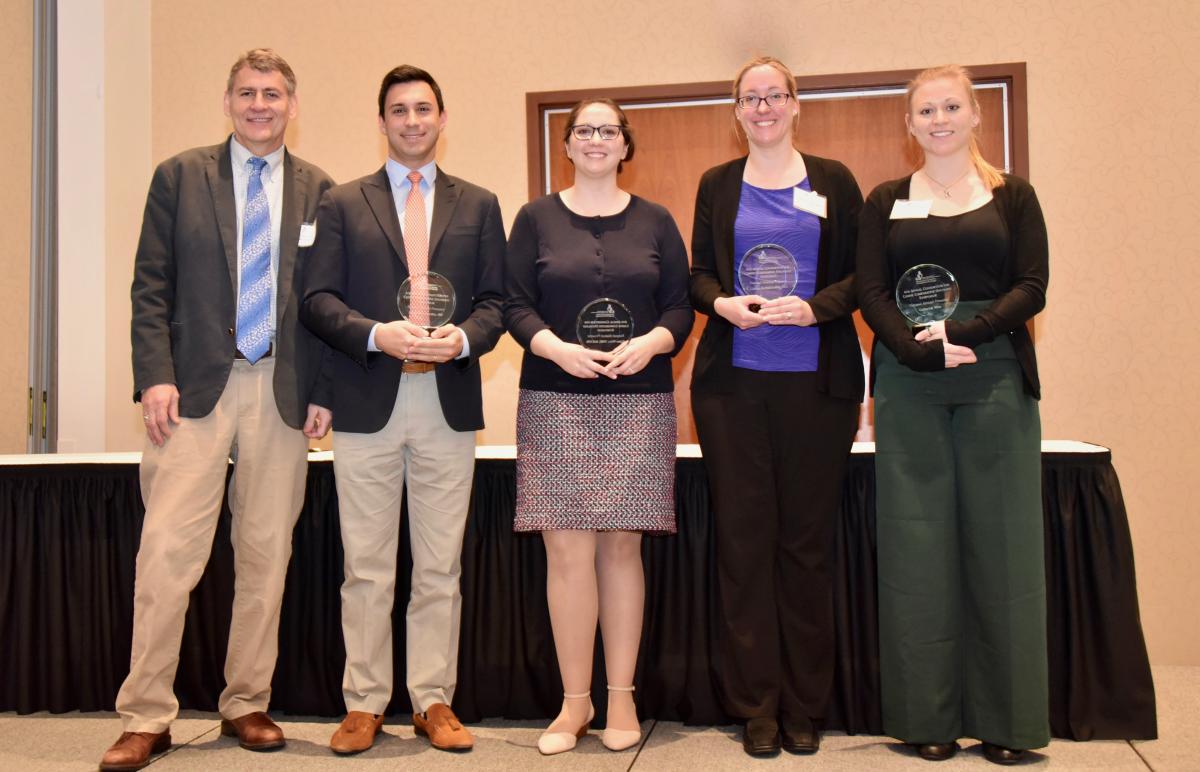 Four investigators (two from Duke and two from UNC) got top honors at the C3O Symposium for their research posters: Alexander Lazarides, MD, (Duke) for his poster describing work trialing bortezomib in dogs with osteosarcoma; Claire Wiley, DVM, (NC State) for her poster on comparative genomic aberrations between human and canine prostate cancer; Suzanne Bartholf-DeWitt, DVM, for her poster on how ATRX promotes aggressive features of osteosarcoma across species; and Catherine Wise, BS, for her poster on pet dogs as sentinel species to examine health outcomes. Steven Suter, DVM, PhD, (at left) presented the awards.The C30 “baby” — after four years (or 28 in dog years)— has grown up.

There are plans for a national consortium — the Comparative Oncology Research Consortium (CORC) — that brings together dedicated physicians and veterinarians with NCI designated cancer centers and veterinary colleges and schools to explore the gaps in comparative oncology in the areas of devices and technology, diagnostics, and biology and drugs.

A direct outgrowth of C30, the CORC has gotten early financial support from the V Foundation, a longtime C30 partner.

Kastan, with Rodney Page, DVM, director of the Flint Animal Cancer Center at Colorado State University, is leading the effort to bring this national consortium to fruition.

“We’re so proud to have the V Foundation involved with C3O since its inception, and we’re all very excited about the opportunity to grow this into a national entity,” he said.