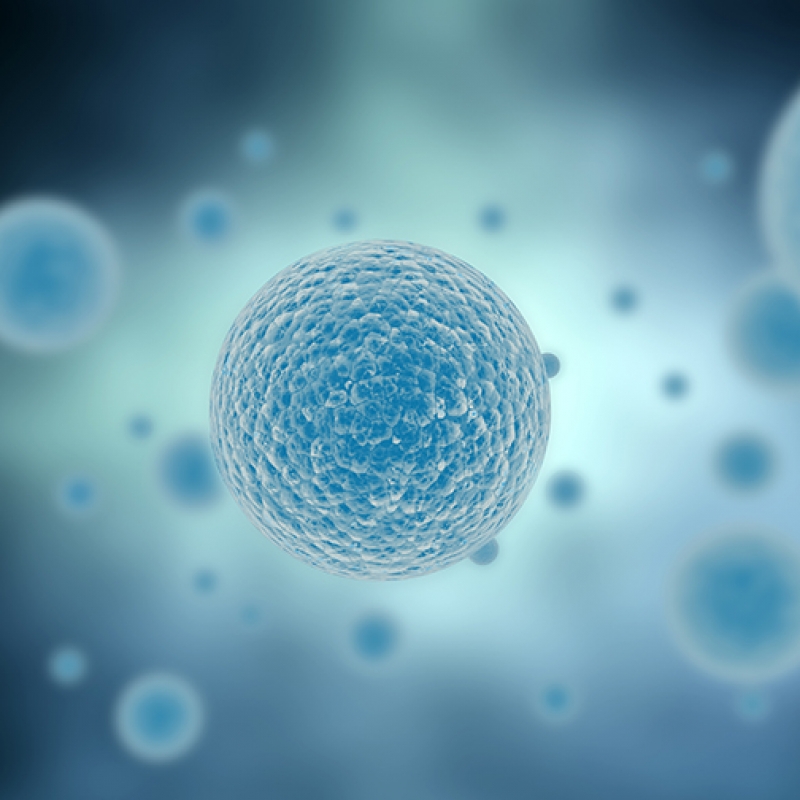 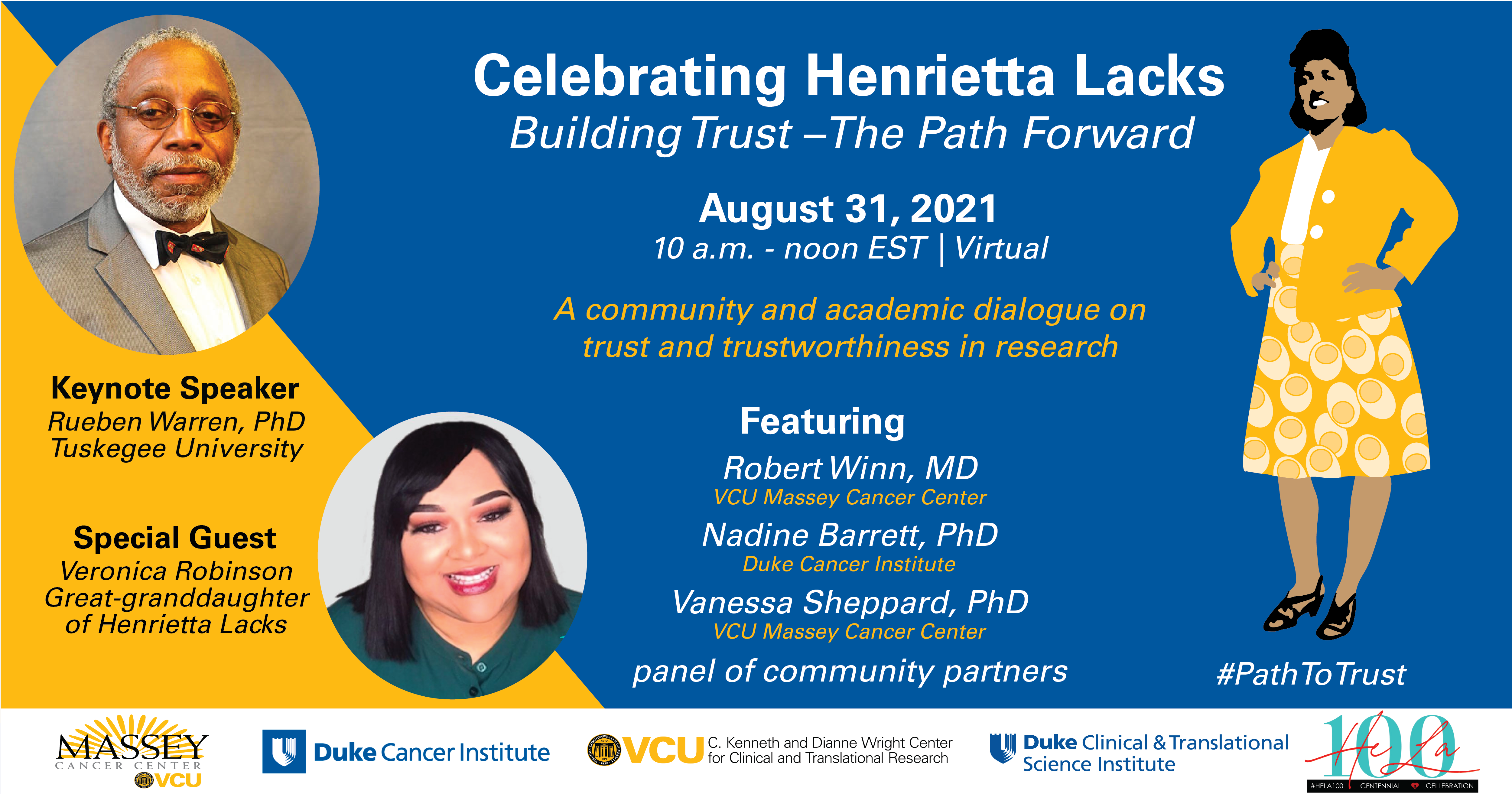 Duke Cancer Institute and VCU Massey Cancer Center, in partnership with the Duke Clinical & Translational Science Institute and the VCU C. Kenneth and Dianne Wright Center for Clinical and Translational Research, will host, on August 31, the first in a series of events designed to engage with the community, including patients who have been involved with clinical research and trials, as well as researchers, both locally and nationally.

The two-hour event — Celebrating Henrietta Lacks: Building Trust- The Path Forward — a community and academic dialogue on trust and trustworthiness in research, will be held from 10 a.m. to noon via a virtual format.

Lacks, an African American mother of five, was diagnosed in 1951, at age 31, with an aggressive cervical cancer and died that same year.

Her cancer cells — taken from a biopsy of her tissue during treatment and used, without permission, for research purposes — were found to be especially unique. Nicknamed "HeLa" cells, from the first two letters of her first and last names, Lacks' cells were the first immortalized human cell line. They've been used used to test the effects of toxins, drugs, hormones and viruses on the growth of cancer cells and have led to key discoveries in cancer, immunology and infectious disease.

The VCU/DCI event, explained Barrett, will "celebrate a woman, Henrietta Lacks, who, unbeknownst to her, has made a worldwide impact in health — all under the auspices of research that most certainly was not ethical."

"But now it's a new day and it's an opportunity to celebrate her work and who she is and her family and the contributions," said Barrett, "and also to start thinking about how do we together, collectively, start to move research in a way that addresses health disparities and particularly for those that are under-represented, under-engaged and often marginalized due to systemic and structural racism."

On August 1, 2020, The Lacks Family hosted a virtual symposium to launch its year-long HELA100: The Lacks Family-led Centennial CELLebration honoring Henrietta Lacks' incontestable impact to honor her legacy on the occasion of what would have been her 100th birthday. Learn More

The Legacy of Henrietta Lacks (Read Below)

As medical records show, Mrs. Lacks began undergoing radium treatments for her cervical cancer. This was the best medical treatment available at the time for this terrible disease. A sample of her cancer cells retrieved during a biopsy were sent to Dr. George Gey's nearby tissue lab. For years, Dr. Gey, a prominent cancer and virus researcher, had been collecting cells from all patients who came to The Johns Hopkins Hospital with cervical cancer, but each sample quickly died in Dr. Gey’s lab. What he would soon discover was that Mrs. Lacks’ cells were unlike any of the others he had ever seen: where other cells would die, Mrs. Lacks' cells doubled every 20 to 24 hours.

Today, these incredible cells— nicknamed "HeLa" cells, from the first two letters of her first and last names — are used to study the effects of toxins, drugs, hormones and viruses on the growth of cancer cells without experimenting on humans. They have been used to test the effects of radiation and poisons, to study the human genome, to learn more about how viruses work, and played a crucial role in the development of the polio vaccine.

Although Mrs. Lacks ultimately passed away on October 4, 1951, at the age of 31, her cells continue to impact the world."

The Importance of HeLa Cells (Read Below)

"Among the important scientific discoveries of the last century was the first immortal human cell line known as “HeLa”  — a remarkably durable and prolific line of cells obtained during the treatment of Henrietta’s cancer by Johns Hopkins researcher Dr. George Gey in 1951.

Although these were the first cells that could be easily shared and multiplied in a lab setting, Johns Hopkins has never sold or profited from the discovery or distribution of HeLa cells and does not own the rights to the HeLa cell line. Rather, Johns Hopkins offered HeLa cells freely and widely for scientific research.

Over the past several decades, this cell line has contributed to many medical breakthroughs, from research on the effects of zero gravity in outer space and the development of the polio vaccine, to the study of leukemia, the AIDS virus and cancer worldwide.

Although many other cell lines are in use today, HeLa cells have supported advances in most fields of medical research in the years since HeLa cells were isolated."

"The story portrayed in The Immortal Life of Henrietta Lacks points to several important bioethical issues, including informed consent, medical records privacy, and communication with tissue donors and research participants.

Johns Hopkins, and researchers and bioethicists worldwide, have learned a great deal from examination of these issues. We are deeply committed to ensuring the appropriate protection and care of medical information related to Henrietta Lacks and her family. In 2013, Johns Hopkins worked with members of the family and the National Institutes of Health (NIH) to help broker an agreement that requires scientists to receive permission to use Henrietta Lacks’ genetic blueprint, or to use HeLa cells in NIH funded research.

The committee tasked with deciding who can use HeLa cells now includes two members of the Lacks family. The medical research community has also made significant strides in improving research practices, in part thanks to the lessons learned from Henrietta Lacks’ story.

The table below demonstrates the significant shift in biomedical practices between the time when Henrietta Lacks was treated and today." VIEW TABLE/READ MORE

In Henrietta Lacks’ centennial year, researchers must do more to ensure that human cells cannot be taken without consent
READ