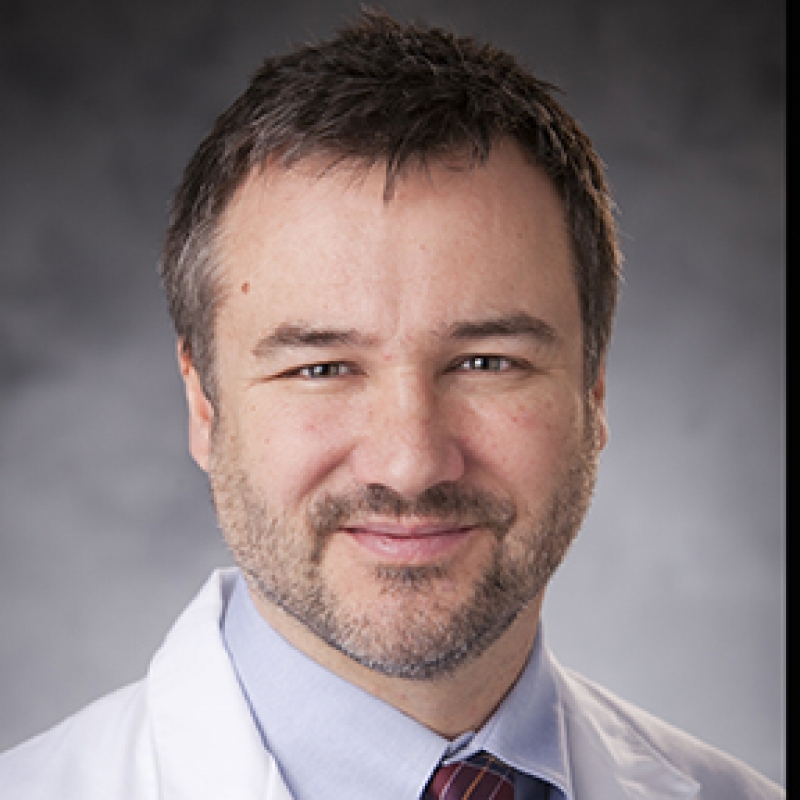 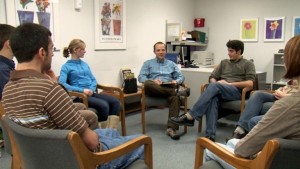 In a scene from this training video, trained actors demonstrate Davis’ mindfulness-based approach.James M. Davis, M.D., medical director of Duke’s Center for Smoking Cessation, had his first lesson on the addictive powers of tobacco 30 years ago. Growing up in the mountains outside of Asheville, Davis and his brother were one of many local children who helped to weed, hang and dry the tobacco crop that made up much of the area’s economy. Touching the plant was enough to get most of the local children hooked.

“The tar and nicotine comes right through your skin, just like a nicotine patch,” Davis said. “The other children all became addicted just from working the fields. Luckily for me, my parents always made my brother and I wear gloves. Most of the children who worked the fields soon started chewing tobacco or smoking cigarettes.”

In many ways, efforts to help people quit smoking have gotten easier since Davis’ childhood. Knowledge about the health dangers of smoking have become much more widespread—Davis said that he has noticed a substantial difference in people’s opinions even in the nine years he has been working in the field.

More people want to stop smoking as well–the Centers for Disease Control and Prevention estimate that more than two-thirds of today’s smokers want to quit.

But in other ways, even as the number of people who have quit smoking has grown, helping the remaining group of heavily addicted smokers to quit has become more difficult because they are “stubbornly” addicted.

“A challenge that we face today is that many smokers who have been able to quit easily have already quit,” Davis said. “The smokers who are left – the ones we see now in our clinics and hospitals—have failed most available treatments. The average smoker we see today has already tried to quit five to 10 times. When a smoker has relapsed so many times, they can be wary about trying to quit again, especially if we don’t have something different to offer them.”

Davis’ research focuses on ways to help people quit for good. The answer may lie, in part, in a practice called mindfulness, a method for paying attention to one’s own thoughts, habits and behaviors.

Davis is piloting an intense, seven-week program at the Duke Cancer Institute that combines mindfulness with other proven techniques. The program includes a new medication regimen tailored to a smoker’s individual addiction level developed by other Duke researchers. It also includes a set quit date to work toward, group support, and counseling. This combined “kitchen sink” approach appears to work better than any one method alone.

Davis compared mindfulness to a person in a movie theater suddenly becoming aware that he is sitting in a dark room with 20 other people. Instead of being constantly absorbed with the images on the screen–or the distractions and drama of everyday life–mindfulness allows a person to notice the awkward angle of the theater seat, the tapping of his foot and the way he is absentmindedly eating popcorn.

“So much of smoking addiction occurs automatically – addictive triggers, emotions, physical agitation, stress, addictive thoughts – all can lead to relapse without a smoker ever knowing what is happening,” Davis said. “If a smoker can gain awareness of addictive processes as they arise, they have a fighting chance.”

In other cases, what feels like an overpowering urge to smoke may be fueled by temporary factors such as stress, fatigue or environmental cues like an old smoking spot.

Rather than trying to help people quit through willpower alone, mindfulness retrains the brain to be aware of and overcome the habitual behavior that leads to a relapse.

Kelly Bodoh is one of the mindfulness program’s success stories. Bodoh, a substance abuse counselor herself, had been smoking for more than a decade before taking a course Davis led while in Madison, Wisconsin, in 2010.

“I remember distinctly smoking a couple of cigarettes one afternoon during my freshman year in college, and asking myself, ‘What am I doing?’ and throwing them away. I ended up buying a second pack later that day. Soon I was smoking two to three packs a day,” Bodoh said.

When she signed up, Bodoh did not have a lot of faith in the program. Bodoh had not gone a day without smoking since she started and believed that she would be a lifetime smoker.

“As a smoker the cigarette becomes your go-to, your best friend,” Bodoh said. “You imbue it with all these powers over your life. I don’t think they had ever seen anyone as panicked as I was. I was a mess.”

Bodoh said the mindfulness-based approach allowed her to see how her emotional responses to her habit were keeping her addicted. This response included both the psychological power tobacco had over Bodoh, as well as her own feelings of inferiority that she felt from being unable to quit. “I loved the program. It was so affirming to have somewhere where you were accepted and understood,” she said.

Bodoh, who hasn’t picked up a cigarette since her quit date, said she felt a life-altering sense of confidence and reward after being able to give up smoking.

“Quitting means so much more than being able to breathe a little easier–it’s being able to successfully conquer my greatest fear. I have courage in my relationships and my abilities that I didn’t have before,” she said.

Today, Bodoh runs a smoking cessation program at Mertier Hospital in Wisconsin. She said that one of her greatest sources of satisfaction is in helping other people overcome the same barriers that she did.

“My patients know there’s no sense of judgment or any of these things when they come to me because I get it,” she said.

Davis expects to start patient recruitment at the DCI later this year. The full program will include the intense, seven-week course as well as a “lighter” version that focuses on medication with minimal therapy, Davis said. Once this pilot version is completed, Davis hopes to offer the smoking cessation program to the Duke Medical Center, and eventually, the surrounding communities.

In the meantime, if you want to quit, or know someone who does, visit the Duke Tobacco Cessation Resources website (http://www.hr.duke.edu/benefits/wellness/tobaccofree/) or call the North Carolina Quitline at 1-800-QUIT-NOW (http://quitlinenc.com/).

Making the Decision to Quit

If you smoke, quitting tobacco is likely the best decision you can make for your health. A variety of treatments are available to help you with this task. Talk with your health-care provider about the best option (or options) for you. The answer may depend on your personal case, preferences and other factors. These options include: