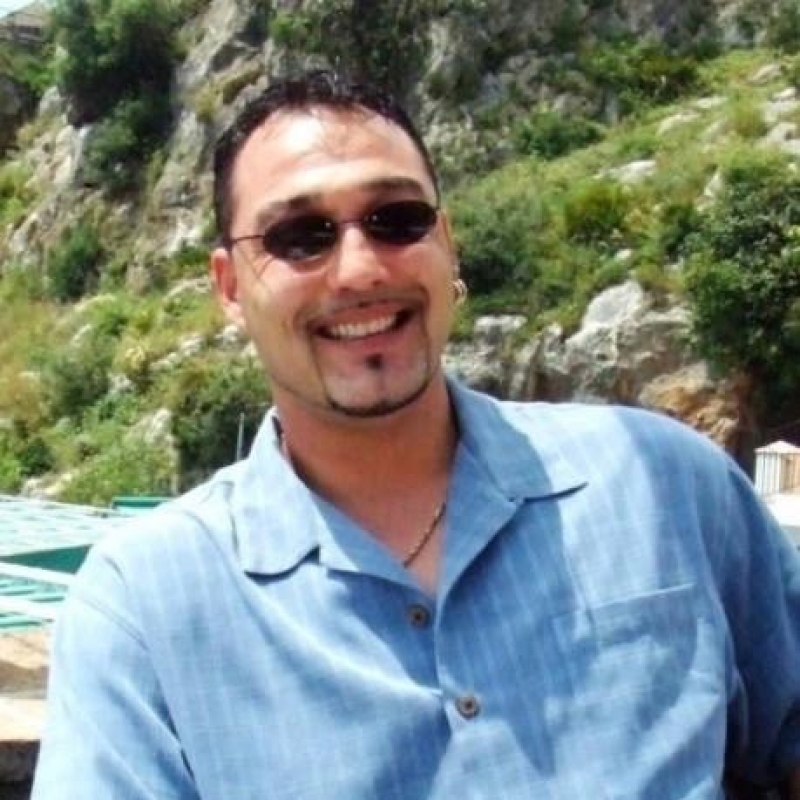 To Have and to Hold

Christy and Tony Leonard met on base in Baghdad, Iraq, in 2004. They were both serving as civilian contractors with the U.S. military, setting up IT communications.

In August 2006, they left Iraq for the military town of Fayetteville, North Carolina — and planned a spring wedding.

When they married in May 2007, Tony already had three sons from two previous marriages. Over the next couple years, happily settled into their new life back in the U.S., Christy and Tony would have two sons together.

Family life in North Carolina agreed with them. They continued to work as IT contractors and in their leisure time enjoyed watching their sons play sports or just curling up on the couch for a movie.

In February 2012, their lives took a major detour.

“We’d only been married four-and-a-half years when Tony was diagnosed with stomach cancer,” recalled Christy. “I didn’t know anything about stomach cancer and since they didn’t see a tumor on the scan, I thought he was stage zero.”

Though a definable mass wasn’t seen through the endoscope, the stomach wall was clearly abnormal. With cancer cells infiltrating deep throughout the stomach lining, the stomach wall had become very rigid and thick. It was diffuse gastric cancer (linitis plastica).

Tony was referred to the chief of the Division of Advanced Oncologic and GI Surgery at Duke, Theodore Pappas, MD, at Duke Cancer Center Durham. Removal of Tony’s stomach, Pappas said, was the only option.

From This Day Forward

Tony was only 39 when he was diagnosed. While stomach cancer is more common in men than in women, the average age at diagnosis is 68.

Early-stage stomach cancer rarely causes symptoms, and at later stages, most of the symptoms mimic those seen in benign conditions. Tony had had stomach trouble since being diagnosed with irritable bowel syndrome in 2003 following a colonoscopy. He continued to have stomach trouble after meals, but learned to live with it. He didn’t see cancer coming.

“The symptoms of stomach cancer are a lot like the symptoms of dyspepsia,” explained Pappas. “And the whole world seems to have dyspepsia — pain when you eat or reflux or heartburn or whatever. So, if you see a primary care doctor you might sound like the last thousand patients seen. Not everyone is going to get routinely upper-endoscoped.”

This is why, Papas explained, stomach cancer is, more often than not, caught in its later stages.

“Tony would say all the time that if I hadn’t pushed for him to go to the doctor, he never would have gotten checked out,” said Christy, admitting that Tony didn’t always get annual physicals. “Unfortunately, when it’s cancer, shoulda-woulda-coulda is too late.”

Pappas had hoped that all of Tony’s cancer was contained in his stomach — that’s why he removed his stomach — but microscopic cancer cells had already escaped the stomach and infiltrated several of his lymph nodes. He was already stage 3.

“If we could cure everybody by taking the stomach out, we’d happily do it,” said Pappas. “Removal of the stomach is major surgery, but a person can learn to live without their stomach. The problem is that isn’t enough to cure people sometimes. Once it goes to the lymph nodes, it’s pretty hard to cure.”

Tony would undergo 25 rounds of intense radiation treatments, a regimen of between two and four Xeloda chemotherapy pills per day and three rounds of FOX (Fluorouracil and oxaliplatin) at Duke Raleigh Cancer Center, under the care of Carol Hahn, MD, and Yuri Fesko, MD.

“He hated it; he said it was God awful,” Christy recalled.

Dry cereal was all he could stomach. The couple joked that Cocoa Puffs and Fruity Pebbles were keeping him alive.

Tony’s cancer began to take its toll on Christy, Tony’s main caregiver. She was still juggling work as full-time as a data manager for a U.S. Navy contractor and raising four kids at home. Two years before, she’d lost her brother to lung cancer and now the husband she knew seemed to be slipping away.

Debbie’s Dream Foundation: Curing Stomach Cancer, a Florida-based international non-profit dedicated to raising awareness about stomach cancer, funding research, and supporting patients, families and caregivers, was her saving grace. There she linked up with other wives who’d unexpectedly become caregivers.

She could pick up the phone any time of the day or night, commiserate and ask for advice: “He keeps throwing up, what should I do? What should he eat? I’m having a really bad day and he’s taking so many pills for the pain that he’s not my husband anymore.”

The couple also found a sympathetic ear in Duke medical family therapist Tracy Berger who helped them cope with their ever-changing new normal.

Tony, meanwhile, connected to other stomach cancer patients. They helped him cope, and he, in turn gave back, mentoring the newly diagnosed. People would Google his cancer and his name would come up as a survivor. They’d find him and reach out, either through Debbie’s Dream or Christy’s #TeamTony Facebook page.

For Better, For Worse 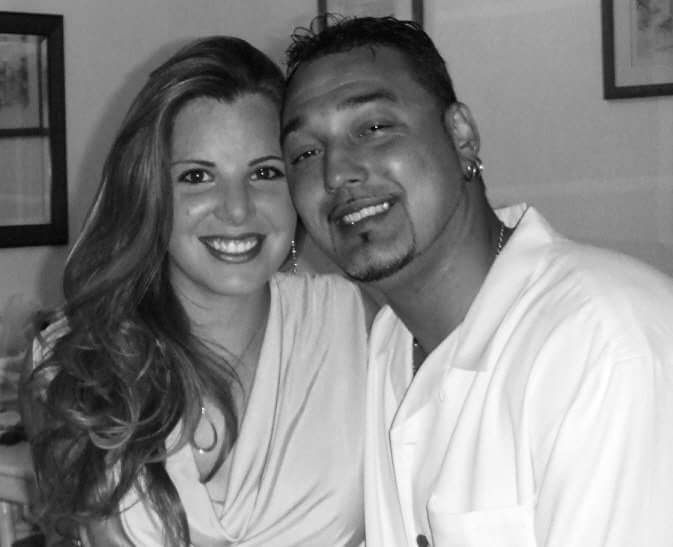 For a few years, Tony’s scans showed no evidence of disease, but he faced additional challenges.

“At one point he was almost able to function normally, but something always came up,” said Christy. “Tony was always in pain.”

About 18 months after surgery and a year after he was done with treatment, Tony’s gallbladder acted up and he had to have it removed. Then he developed heart problems. He had to have a cardiac ablation in January of 2014 and in May that year went on full term disability and social security since he could no longer work.

Despite these challenges, both Christy and Tony gave their all for stomach cancer advocacy. A year after Tony’s diagnosis they co-founded a local chapter of Debbie’s Dream — the North Carolina East chapter.

That year, Christy, Tony and their then-12-year-old son Austin, joined the Debbie’s Dream community for the non-profit’s first Advocacy Day at the U.S. Capitol. Together, they pushed for the U.S. Congress to increase the budget for the U.S. Department of Defense Peer Reviewed Cancer Research Program (PRCRP) and add stomach cancer to the growing list of cancer-research areas the program funded.

As part of a Boy Scouts merit badge, Austin had written Senator Richard Burr to ask him to support his dad’s fight against stomach cancer. The family got to meet the senator during the trip.

Christy and Tony returned for Advocacy Day in 2014. They were ecstatic to learn that stomach cancer would be added to the FY2015 PRCRP budget. Members of the military are exposed to hazardous environments due to the nature of their service and deployments. Adding stomach cancer was a recognition of exposure-related stomach cancer risks faced by service members.

Later that year, their Debbie’s Dream chapter hosted the first of many annual charity golf tournaments in Fayetteville the proceeds of which sponsor patients and caregivers to attend Advocacy Day to lobby for research funds.

In Sickness and in Health 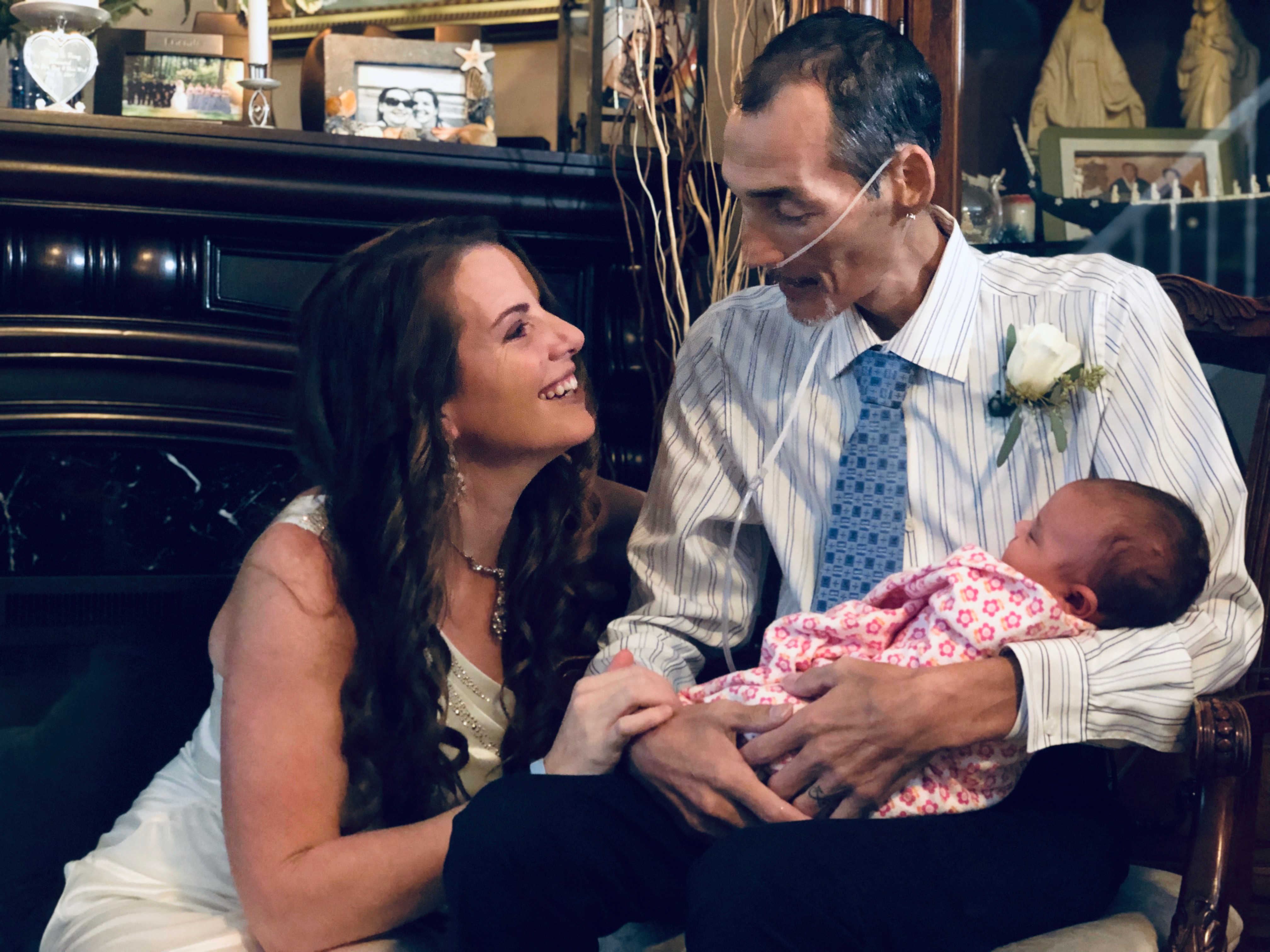 Tony’s cancer came back in March 2017. Pappas removed his spleen, pancreas and part of his colon. That year, an especially tough one, Christy was invited to speak at a National Institutes of Health summit on caregiving.

“It was the biggest honor and absolute privilege of my life,” said Christy, proud to share what she’d learned about caregiving with others.

“I was our last big last hoorah thing,” Christy said.

Most of the family was there, including one of the couple’s two grand-daughters. A Raleigh TV station, WTVD ABC-11, filmed the ceremony.

"I just wanted to make sure that Tony knew no matter what he's always going to be the love of my life,” Christy told the TV reporter after a touching ceremony that had her sobbing her vows.

“Tony always said that he wanted to leave a legacy where people benefitted from his suffering,” said Christy. “Tony was kick-ass and I’m not just saying that because he was my husband, but he impacted and inspired so many people, including me. I tell people all the time that no matter how sick he was he always showed up. Now it's my job to continue his love for life, family, and service.”

Tony lived nearly seven years with a disease that has a 31% five-year survival rate. How to account for him living longer than most?

“To be honest with you, the most remarkable thing was Christy’s energy and passion in that marriage, her moral and physical support. Her buoyancy carried him a long way,” said Pappas. “It was quite amazing to watch because other people (in his condition) would have died before he did.”

Till Death Do Us Part

It’s been nearly a year of “firsts” without Tony. Birthdays. Holidays. Every day.

Christy believes it’s the caregivers who often end up being the advocates for the long haul.

“I was at Advocacy Day five weeks after Tony died this year,” said Christy, who said it helped with her grieving process. “I’m so grateful I did it. Was it hard? Yes, it was hard, but you know what, it made my message that much stronger. Life is all about service and I feel we should always give back and help the next person because somebody helped us.”

The bonds she formed through the journey still hold up.

“The cancer journey is not just cradle to grave. It’s cradle to grave and beyond,” said Christy, who documented her journey as a caregiver in her blog, DeathToCancer.BlogSpot.com and created a new blog about the next chapter in her life. “I still talk to the women, the other caregivers, I’ve mentored and those who mentored me. We don’t just stop when the patient passes, we stick together all the way through to advocacy.”

Stomach cancer doesn’t make the top 10 most diagnosed cancers list or the top 10 in number of deaths. Only .9% of men and women in the U.S. will be diagnosed with it in their lifetime. This, and the fact that stomach cancer rates in the U.S. have been declining for years, make advocating and fundraising for a cure for this particular cancer a challenge.

But Christy knows, in her heart, she’s up to it.

In 2014 the State of North Carolina officially proclaimed November “Curing Stomach Cancer Month” due to the efforts of Christy and Tony Leonard. It's been declared every year since.

On December 17, 2019, the U.S. House of Representatives passed two legislative packages that together comprise all 12 fiscal year 2020 funding bills, including the Labor-Health and Human Services-Education spending bill. Included in that bill was language directing the National Cancer Institute (NCI) to develop a scientific framework using the process outlined in the Recalcitrant Cancer Research Act of 2012 for stomach and esophageal cancers and urging NCI to continue to support research with an emphasis on developing screening and early detection tools and more effective treatments for all recalcitrant cancers. The report directs NCI to provide an update on NCI-supported research to advance these goals in the fiscal year 2021 Congressional Justification. Also, NCI is directed to add esophageal and stomach cancers to future Research, Condition, and Disease Categorization (RCDC) reports. The spending bill includes $41.7 billion for NIH, $6.44 billion of which will go to the NCI. Stomach cancer is again included in the Department of Defense’s Peer Reviewed Cancer Research Program (PRCRP) and the budget for the PRCRP has been increased to $110 million (compared to $90 million last year). Stomach cancer will compete with 13 other cancers for this funding.