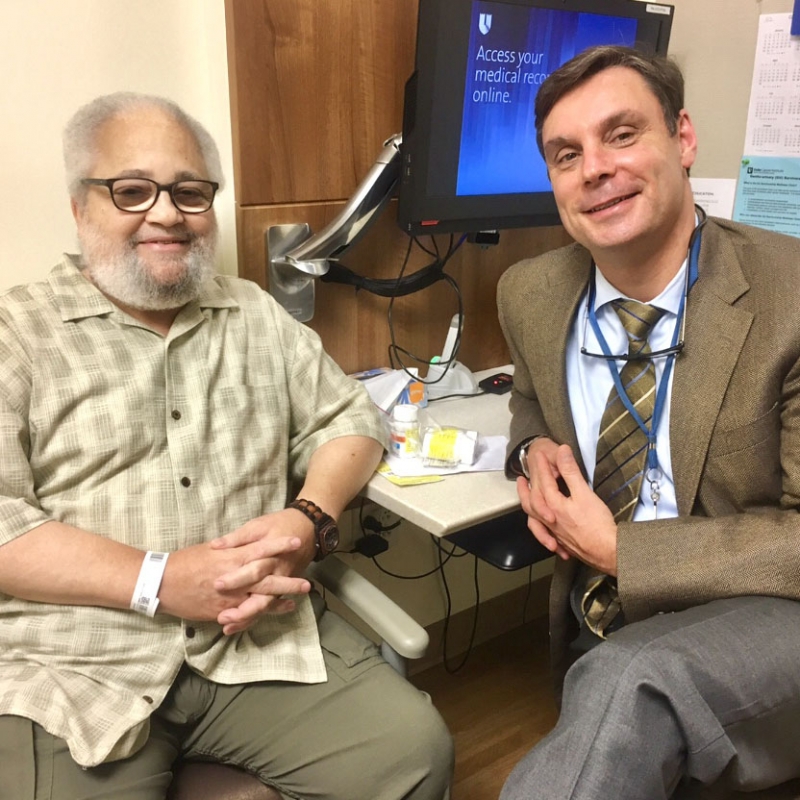 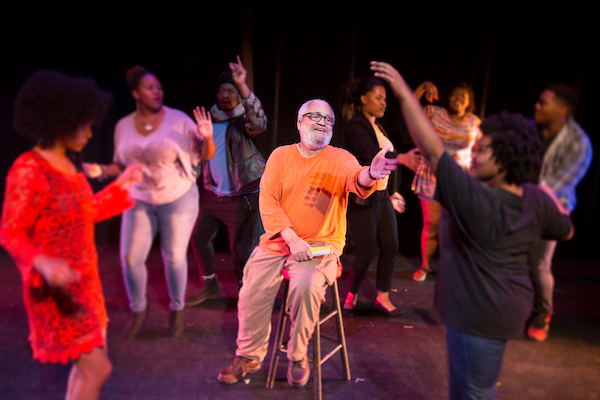 Johnny Alston leading a theatre class at North Carolina Central University. Photo by Jared Lazarus for "Many Faces of Cancer".William Shakespeare said it best when he penned “All the world’s a stage.” No doubt, no one knows this better than Johnny Alston, a 41-year theater professor at North Carolina Central University. Throughout the years he’s played many characters – sometimes the salty antagonist, other times the valiant protagonist. Good or bad, saint or sinner, Alston’s characters were always sure to confront some sort of hardship. But, perhaps his most riveting role presented when a true to life plot left his very future hanging in the balance.

Stunned, Alston learned he had cancer in 2012 after a routine primary care appointment. While his initial prostate cancer screening came back normal, his primary care physician wanted him to see a specialist because of a rising prostate-specific antigen (PSA) level.

Early prostate cancers usually don’t cause symptoms, but more advanced cancers are sometimes first found because of symptoms they cause. The PSA blood test is used mainly to screen for prostate cancer in men without symptoms.

Alston, 70, a resident of Durham, North Carolina, was referred to the Duke Cancer Institute where he received his official diagnosis – stage 2 prostate cancer. At that time, the cancer was confined to his prostate, and the Duke care team recommended surgery to remove it. Undaunted by the news of his diagnosis, Alston opted for surgery to remove his prostate.

“I didn’t want to be worried or scared,” he recounted. “If you don’t let it get to you in the beginning, then every little upswing – every little positive thing that you hear – makes you all the stronger. And, we all know, strength is required to beat cancer.”

After his surgery, Alston’s PSA was undetectable and he quickly returned to teaching and the stage. The curtain had seemingly closed on act one; he had beat cancer.

However, nearly two years later, his PSA began to rise again. This time Alston found himself in the care of prostate cancer specialist Daniel George, MD, at the Duke Cancer Center. His prostate cancer had not only returned, but it had metastasized to his rib, lymph nodes and spine.

“Today we are able to help men continue to live with prostate cancer for years beyond what we’ve historically been able to do,” described George. “Even for patients with metastatic disease, we can offer a sequence of therapies that in many cases can stop the cancer from progressing and can maintain quality of life for years. We are studying these new therapies to understand how well they will work in men with earlier stage disease and how they work in combination with other therapies.”

With the disease accelerating, George enrolled Alston in the Abi Race study, a clinical trial to understand how hereditary factors and race affect response to abiraterone, a new hormonal therapy for metastatic prostate cancer. He responded well at first, but as the months wore on, Alston’s cancer became resistant to his clinical trial and his PSA was again rising. Following progression on this treatment Alston underwent palliative treatment with radiation to his ribs and spine.

Next, George signed Alston up for a second trial, the Gilead study. This study combines enzalutamide, a novel hormonal therapy, with a new class of anti-cancer agent, a bromodomain and extraterminal (BET) inhibitor (GS-5829), providing an even more targeted therapy. Following his radiation and on this treatment Alston’s PSA levels began to level off. Alston is currently the longest active participant on the trial. The care team plans to keep Alston on the Gilead Study as long as he does not show any signs of progressing.

“I’m living today like I have my entire life, because I refuse to let this cancer worry me,” explained Alston. “A lot of that is because of Dr. George –when there are new therapies, he is willing to try them with me. Honestly, I let him lead.”

Now in remission and nearing retirement, Alston is looking forward to the next act.

He encourages other patients to avoid “living like a patient.”

“No matter how sick you are, find a way to maintain even the smallest shred of normalcy,” Alston explained. “Accept help and welcome the love and support of your families, friends, and, of course, the good people of Duke Cancer Institute; they’ve become a second family to me.”

Alston was featured in a photo essay by Duke photographer, Jared Lazarus. Listen to Alston in his own words.