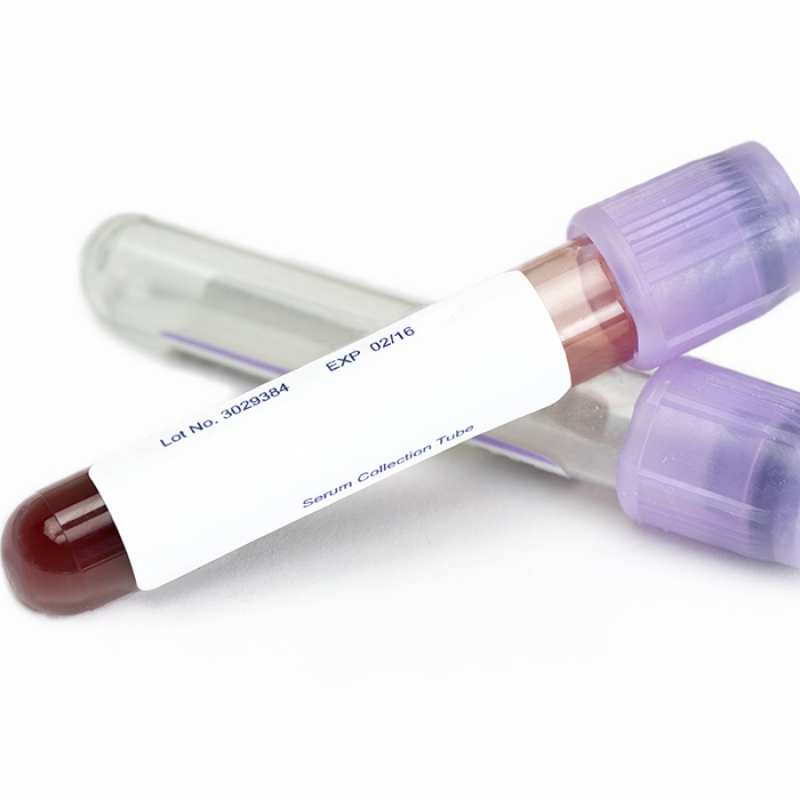 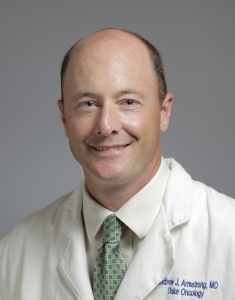 Andrew Armstrong, MDTwo blood tests can predict which subset of men with advanced prostate cancer will likely not benefit from anti-androgen therapies, providing doctors and patient added clarity on treatment options, according to a study led by Duke Cancer Institute.

In a multi-center, prospective study called PROPHESY, a research team led by Andrew Armstrong, MD, associate director for clinical research in the Duke Prostate and Urologic Cancer Center within the Duke Cancer Institute, compared the two blood tests to assess how well they predict the effectiveness of hormone treatments -- abiraterone acetate or enzalutamide. Armstrong presented findings June 4 at the annual meeting of the American Society of Clinical Oncology.

“The results of this study are clinically useful in guiding care, particularly in men with high risk disease and those who have already tried enzalutamide or abiraterone,” Armstrong said. “We have therapies to treat recurrent, metastatic prostate cancer, but they don’t work on everyone, and cross-resistance is a major emerging problem in our field. It’s important to know who will be more likely to respond and who has little chance of benefiting in order to rapidly provide alternative, more effective therapies or to develop new therapies for these men.”

Armstrong and colleagues enrolled 118 men at five medical centers in a head-to-head comparison to provide external validation of the two different prognostic tests. One assay is marketed by Epic Sciences and Genomic Health and is called the CTC AR-V7 nuclear protein test. The other was developed by John Hopkins University and is called the CTC AR-V7 RNA test. Both measure AR-V7 in different ways and neither has been approved by the Food and Drug Administration. 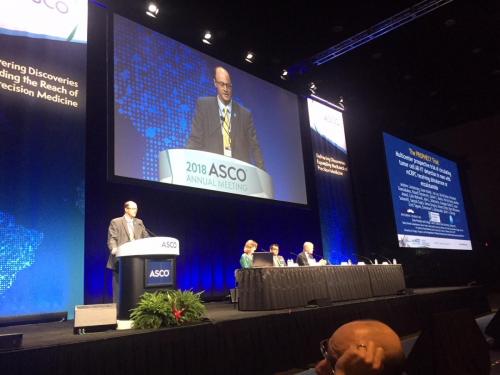 Andrew Armstong, MD, presents his findings at the 2018 Annual Meeting of the American Society of Clinical Oncology.

While the main results of the study examined these two AR-V7 CTC tests, Armstrong and colleagues also examined a number of additional genomic alterations using the liquid biopsy that may help to further refine treatment selection and how drug resistance develops.

In clinical use, the assays would guide care for men with advanced, hormone-resistant disease whose next phase of treatment would typically include abiraterone or enzalutamide, which target androgen receptors, or alternatives such as chemotherapy. The tests use simple blood draws, providing results in just a few days.

The researchers are now assessing similar additional tests to better identify men with AR-V7 negative and positive disease who might benefit from new treatments and approaches to therapy.

“Having this predictive power could spare many men from undergoing therapies that would simply not benefit them, saving time, money and a great deal of emotional distress,” Armstrong said. “For this subset of men, we can get them started on chemotherapies or enroll them in other clinical trials for immunotherapy, targeted therapies, hormonal therapies, or combination approaches. This represents a major step forward in the care of men with aggressive prostate cancer.”