For Virginia Man, The New Year Was Nothing To Toast 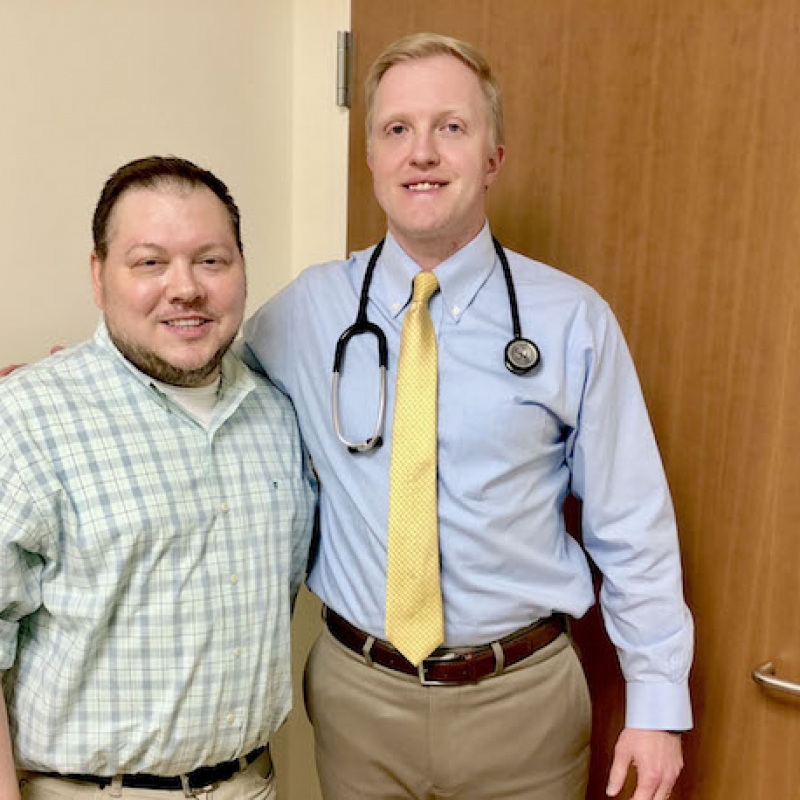 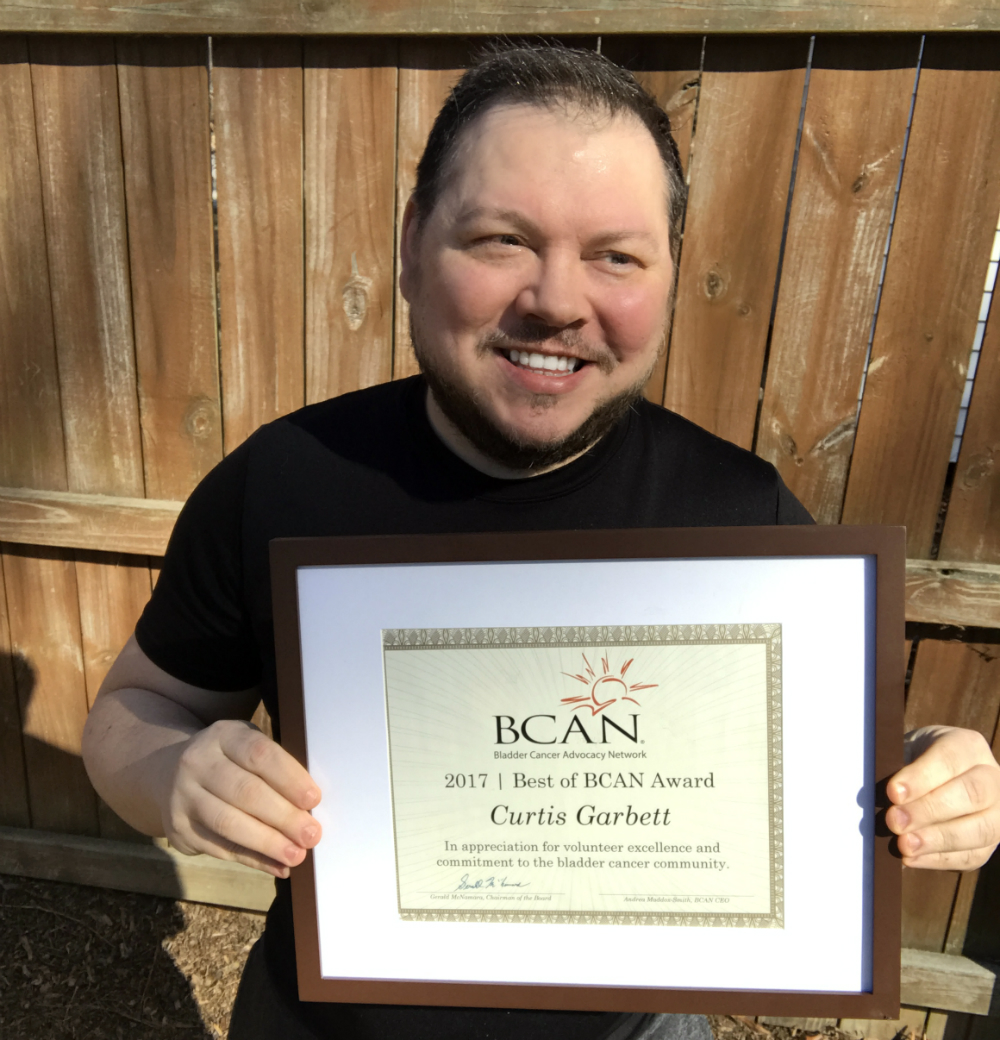 In 2017, Curtis Garbett was presented with an award from Bladder Cancer Advocacy Network recognizing his commitment to the bladder cancer community. As a new year ushers in, so does a time of renewed hope and new beginnings. Instead of ringing in the new year as is customary, Curtis Garbett found himself during the waning hours of 2015 learning he had cancer.

“I couldn’t believe what I was hearing,” said Garbett. “I was only 39 years old; my entire life was ahead of me. I resolved right then and there that I was going to be a survivor.”

After beginning treatment in January 2016 near his hometown in Midlothian, Virginia, his medical oncologist recommended he seek a bladder cancer specialist if the cancer advanced. Bladder cancer has a high risk of recurrence, and his oncologist, who didn’t specialize in bladder cancer, wanted to be sure Garbett had the best care possible. Garbett was referred to Duke Cancer Institute’s Michael Harrison, MD, who concentrates on clinical research and drug development in bladder cancer.

At Duke, Garbett has had access to a multidisciplinary team of oncologists with knowledge of breaking science in bladder cancer care and research. Harrison's bladder cancer research, including quality-of-life studies, are published in industry journals.

“Bladder cancer is often diagnosed when it is non-muscle invasive,” said Harrison, who specializes in advanced bladder cancer research and care. “This means the cancer is still contained within the inner layer cells of the bladder. However, there is a high risk that the cancer will become muscle-invasive, moving into the deeper layers of the bladder wall and making it more likely to spread and harder to effectively treat.”

After visiting with Harrison, and since his cancer had not spread, Garbett returned home to undergo his chemotherapy treatment near his hometown with his original medical oncologist.

He credits his family and friends with providing him the “daily doses of strength” he needed to endure the treatments. During that time, Garbett’s family coined the term “Crush it for Curtis.”

“My family was all-in; we would “crush” cancer, together,” Garbett said. “We have always been close-knit – always there for one another.”

By May of 2016, five months into his resolution, Garbett was declared cancer-free.

After a routine scan nearly a year later, a small spot near Garbett’s lungs was discovered. The bladder cancer had not only reoccurred, but metastasized. While still under the care of his hometown medical oncologist, Garbett underwent genetic testing to identify any mutations that may have been present in his cancer.

Garbett’s genetic testing revealed a FGFR1 (fibroblast growth factor receptor-1)mutation.Armed with the results of his genetic testing, Garbett immediately traveled to Duke Cancer Institute to receive the specialized care that Harrison could provide for his advanced bladder cancer.

“I was very fortunate that my medical oncologist in Virginia was collaborative,” said Garbett. “Having already been established as one of Harrison’s patients, I was easily able to get in and begin treatment.”

In May 2017, Garbett began treatment on the Incyte 101 trial, which combined pembrolizumab, a programmed cell death 1 (PD-1) inhibitor, and INCB054828, a FGFR inhibitor.

Pembrolizumab (brand name: Keytruda) is an immunotherapy (PD-1 inhibitor) that is FDA-approved for bladder cancer in patients who are ineligible for cisplatin (a chemotherapy) or whose cancer progresses or recurs after platinum-based chemotherapy. The Incyte drug, INCB054828, is a small molecule that blocks FGFR1. Researchers believe the combination of the two drugs on the study may have a higher likelihood of decreasing cancerous activity than either alone. When used in combination, the patient might also have a better chance for a complete response. (Emerging evidence suggests complete responses with immunotherapy are more “durable,” or long-lasting, than with chemotherapy.)

“Garbett’s genetic testing revealed an alteration in a growth signaling pathway called (FGFR1), which may have contributed to the cancer forming. This alteration is occurring in the normal genetic material (DNA) he inherited from both parents,” explained Harrison. “I was aware of emerging data on the efficacy of FGFR inhibitors in urothelial carcinoma of the bladder and at Duke, we had two potential clinical trials available for Curtis.”

In October 2017, Garbett was again declared cancer-free and taken off the trial. Settling back to “normal life” as best he could, Garbett soon discovered that although he beat cancer, the battle wasn’t over. 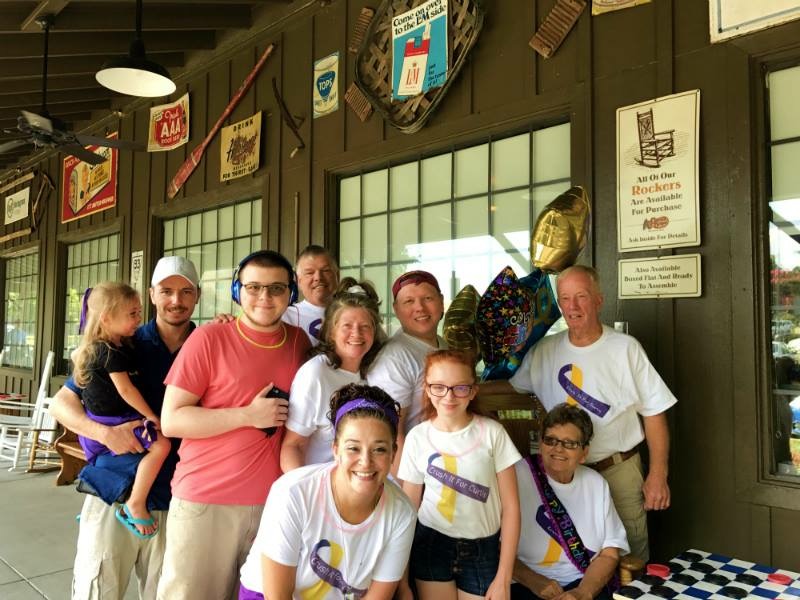 Curtis and his family after an event to support bladder cancer research. They are wearing "Crush It For Curtis Foundation" t-shirts in honor of his battle against bladder cancer.“I began to realize I could continue to play an important role by helping to raise awareness,” said Garbett. “I decided to establish the Crush It For Curtis Foundation, a small non-profit dedicated to informing others about breakthrough bladder cancer research and care.”

However, three months after stopping the trial due to side effects of the study drugs, routine scans revealed that Garbett’s cancer had returned for a third time.

“While progression is not the result we are hoping for, the field is rapidly evolving with clinical trials targeting Garbett’s gene mutation,” said Harrison. “This time around, knowing what we now know, we can give pembrolizumab as standard-of-care, and based on how the cancer reacts to the immunotherapy alone, we will consider adding a different FGFR inhibitor down the road.”

Garbett believes his ability to continue to battle bladder cancer is due to his “out-of-the-box” treatment at Duke.

“They’re not afraid to push the envelope,” he said. “The results of genetic testing enabled me to enroll in a trial that had the best chance of eradicating my cancer the second time. Now, on my third round, I’ll remain positive knowing that Duke is ready to help me win again.”