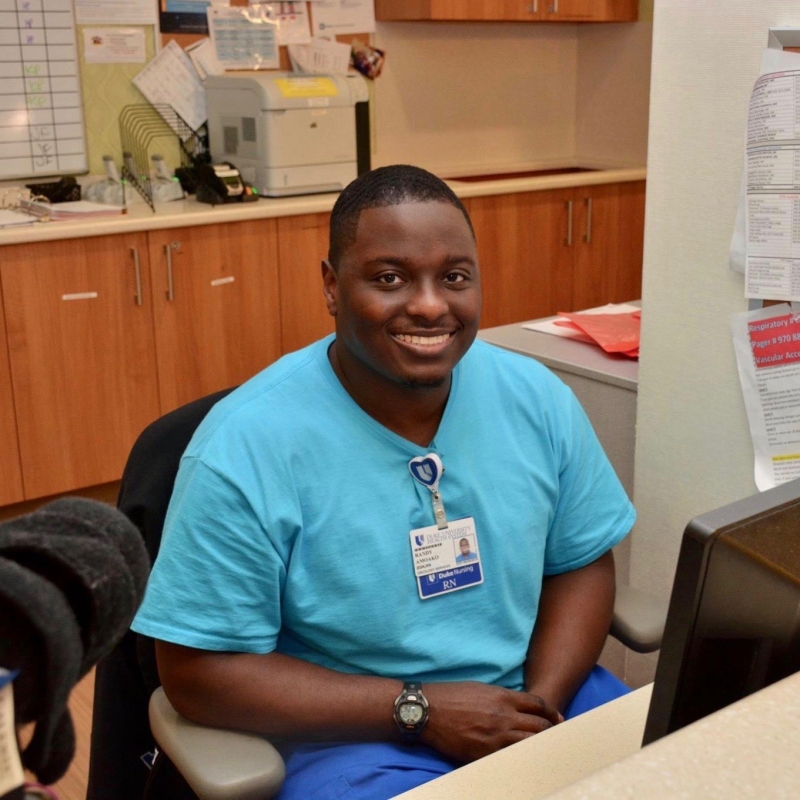 What does it take to be a great oncology nurse? Joey Misuraca, RN, the nurse manager on the 9100 unit of Duke University Hospital, where seriously ill blood cancer patients are treated, is clear.

“What I’m looking for as I hire these new nurses is someone who’s coming out enthusiastic to learn; someone who’s compassionate and empathetic and a real go-getter,” says the 27-year veteran, who oversees a staff of 80 nurses.

Randy Amoako, BSN, RN, who joined Duke three years ago right out of nursing school was one of her hires.

“Randy is special because he is that nurse who can sit back and be very calm and soothing to the patient and then, when he needs to be, he can be that nurse who’s Johnny-on-the-spot and really making things happen for our patients,” says Misuraca.

Not His First Rodeo

No shift is typical. When Amoako arrives, he assesses the medical charts of the three or four patients that he’ll be managing.

Throughout his 12-hour shift, Amoako knows he’ll disperse medications, draw labs and take vital signs, and help with bathing, eating and physical therapy. The shift will also likely feature plenty of “paperwork” on the computer, and consults with colleagues, various managers, and attending physicians.

But he says there will be many things he can’t predict, like complications or emergencies. He may witness heartbreak or experience sadness. There might also be laughter.

It’s 1 p.m. on June 8, and Amoako checks on Doug Haney, 71, who’s getting a 24-hour chemotherapy treatment and will stay for five days.

Haney operated steam boilers at a paper mill in western North Carolina for 48 years and worked until his cancer got so bad he couldn’t. He started coming to Duke in January, when local doctors ran out of things they could do to treat his aggressive mantle cell lymphoma.

Haney, who’s being treated by Matthew McKinney, MD, notes he’s trying to get strong enough to qualify for a clinical trial. It’s his fourth trip to 9100 since he was diagnosed in December last year.

“Your fourth rodeo,” quips Amoako. Haney laughs and then politely asks Amoako to close the door on his way out so he can try to get a nap in.

Amoako checks in on Haney again, about an hour later, when he hears his cardiac monitor box beep.

“I went out of range and they thought I died,” jokes Haney, who decided against that nap and has just returned from a walk outside.

Then Amoako notices bubbles in the chemotherapy line, which he said happens from time to time, and flicks them out.

“You’re bubblin’ up and it’s bubblin’ over,” nods Amoako.

It’s 2:30 and time for Amoako to see Brenda Mangum and hang her second bag of chemotherapy. Mangum, a 62-year-old dental hygienist from Zebulon, North Carolina, was diagnosed with cancer in late February.

She’s in for a 24-hour treatment, the fifth of six treatments.

“Can you tell me your name and date of birth?” Amoako asks her before starting the drip.

Mangum says she hopes to be going home soon to her acre of land in Zebulon where she lives with her husband and two rescue dogs.

While she loves country living, after years in the hustle and bustle of Raleigh, she tells Amoako there’s one drawback — the local deer.

“Every one of us has hit at least one deer, if not more,” chuckles Mangum, shaking her head. “There’s this one stretch where I honk my horn when I’m driving through, because the deer just come out of nowhere. It’s almost like they’re just standing there…and when they hear you, they jump right in front of your car!”

“It’s exactly like that,” smiles Amoako, going on to describe a veterinary medicine internship he had where he learned about the strong adrenaline reflex of deer. “They really do seem to wait for the car to come.”

The physical therapist knocks on the door; interrupting the friendly banter. It’s time, anyway, for Amoako to enter Magnum’s data into the computer and move on to more room checks.

“You get those times when you can interact with the patient and it’s not just strictly medicine,” Amoako explains during some down time. “It’s good to laugh. This is a scary time for them. If they had a choice, they wouldn’t be here.”

After a brief stint as an animal technician in a Duke research lab, Amoako signed on in 2009 to work as a certified nursing assistant (CNA) in all different units of the hospital. He found he preferred the bone marrow transplant unit and 9100 to units he thought he’d like better, including pediatrics and the emergency department. So, in 2015, upon graduating from nursing school, he chose oncology.

“It’s rewarding being a bright spot for cancer patients when they’re in a dark time in their life,” he says.

Continuous learning on the job and off (he’s studying online for his masters of science in nursing), he says, is also rewarding.

“Learning excites me,” says Randy. “Not that you can learn it all in one day.”

As fulfilling as the job is, “patient deaths and the mental health effects of working with patients who are in crisis” are his biggest challenges. Going to church, where he finds his “main support system,” and working out at the gym helps him decompress.

“Working here has made me more grateful and I’ve learned to stop sweating the small,” he said. “This job made me grow up.”