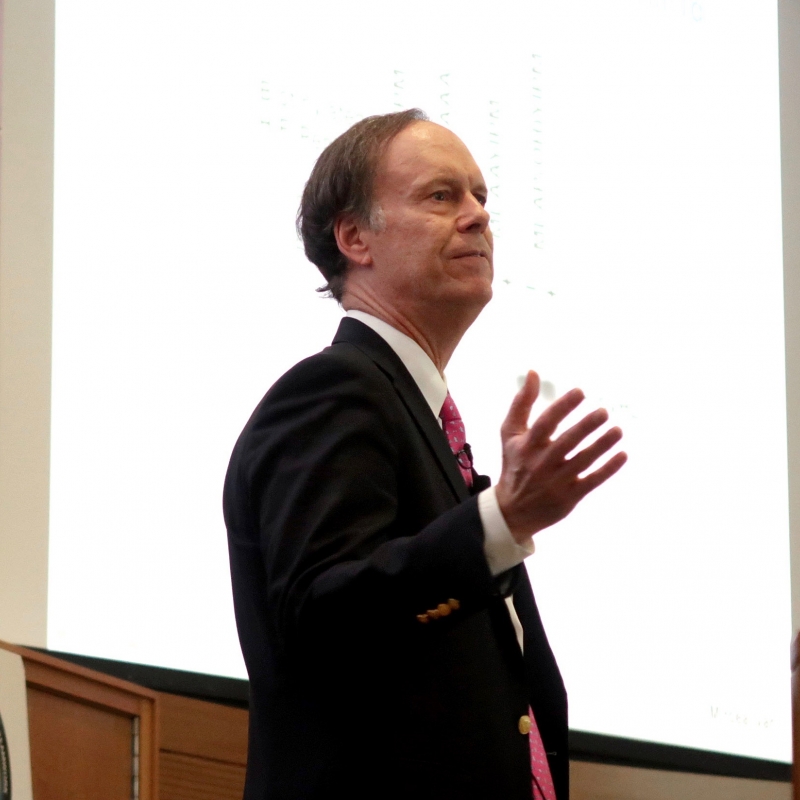 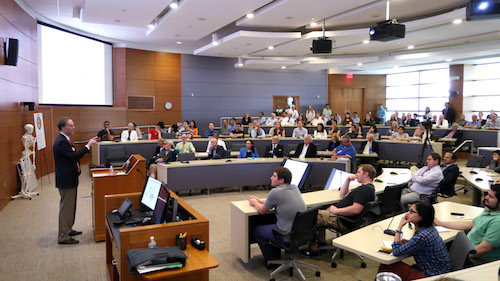 “It’s really great to be home,” said Kaelin, who graduated from Duke with a degree in math and chemistry then in 1982 earned his MD from Duke’s medical school.

About 150 faculty, physicians, researchers, staff and students packed the Trent Semans Center Learning Hall and a spillover crowd watched a live feed from a nearby room.

This past September Kaelin received the 2016 Albert Lasker Basic Medical Research Award, together with Gregg Semenza of Johns Hopkins University School of Medicine and Peter Ratcliffe of the University of Oxford/Francis Crick Institute, for the “discovery of the pathway by which cells from human and most animals sense and adapt to changes in oxygen availability; a process that is essential for survival.”

This ground-breaking research has had implications for the treatment of cancer, anemia, heart attack and stroke.

The Lasker Lectures advance public dialogue about the ways in which scientific questions are pursued, boost public understanding of the importance of biomedical research, and generate excitement about the challenges and promise of biomedical science.

With the Lasker award, Kaelin is in good company. Dating back to 1946, Lasker Awards have honored scientists, advocates and public servants. Previous awardees include M.H.F. Wilkins, F.H.C. Crick, and James D. Watson in 1960 (for the double helical structure of DNA) and former U.S. President Lyndon B. Johnson in 1965 (for legislative leadership for medical research). Duke alumnus and now adjunct professor in the Department of Surgery, Blake Wilson, PhD, was honored in 2013 with the award, along with two others, for the development of the modern cochlear implant.

In Kaelin’s Lasker talk, "The VHL Tumor Suppressor Protein: Insights in Oxygen Sensing, Cancer Metabolism, and Drugging the Undruggable,” he  both drilled down on his seminal work and continuing research and, at times with humor, offered life-as-a-scientist lessons “for the young people.”

"It was wonderful to have Bill return to Duke again and share both his elegant science and his philosophy about science,” dean of the School of Medicine Nancy Andrews told Duke Today. “His talk was masterful, with many important lessons for students, scientists early in their careers, and all of us."

"We feel very fortunate to partner with Dr. Kaelin and the Lasker foundation," said Duke University Chancellor for Health Affairs and CEO of Duke Health E. Eugene Washington. “Like the foundation, we understand that enhancing support for research is vital to improving health in the communities we serve around the world."

With a nod to the philanthropy of the Lasker Foundation, Washington stressed that “efforts to foster a wider appreciation of the value of research investment are incredibly timely.”

“Those crafting research and health budgets would do well to heed Mary Lasker’s words and I quote, ‘if you think research is expensive, try disease.’”

Up to the Challenge

Kaelin opened his talk by describing a discouraging lab experience he had as an undergrad at Duke for which he was “awarded” a C+ by the lab director.

“For those of you that are pre-med, this is like having a wooden stake driven through your heart,” Kaelin joked. “And then on top of that, as an added punitive flourish, he wrote on my Duke transcript that Mr. Kaelin appears to be a bright young man whose future lies outside the laboratory, which I think is the equivalent of a surgeon saying you have the hands of a hematologist.”

Kaelin said that after that he really didn’t think his future was in a lab. He didn’t enter a lab again until his third year of medical school, and with “a lot of trepidation.”

“The lab of Duke professor Randy Jirtle, PHD, was my first taste of a functional lab where I had an engaged mentor who began to teach me the craft of doing science,” he said. “My biggest take-home message from Randy was: the most important thing for a young person entering the laboratory is to have something, anything, actually work.”

After Kaelin graduated from medical school, he completed his internal medicine training at Johns Hopkins Hospital, where he served as chief medical resident. With plans to be a doctor, he went on to a clinical fellowship in medical oncology at Dana-Farber in 1987 and then transitioned to working in the lab of David Livingston, MD, his next mentor. Livingston is known for his research on tumor suppressor genes, including the RB gene which, when mutated, causes retinoblastoma, a childhood eye cancer.

Kaelin said Livingston encouraged him to “ask important questions, to be bold, and to be highly self-critical.”

Kaelin joined the faculty at Dana-Farber in 1992 and, in his own lab, began studying VHL, a tumor suppressor gene that is mutated in von Hippel Lindau syndrome, an inherited disorder characterized by the formation of cancerous and/or non-cancerous tumors and cysts in many different parts of the body, including the kidney.

It was Kaelin’s VHL research that led to insights into how the body’s cells sense and respond to changes in oxygen. His work on VHL helped to motivate the eventual successful clinical testing of VEGF inhibitors — drugs that block angiogenesis — for the treatment of kidney cancer.

A Howard Hughes Medical Investigator since 1998 and member of the National Academy of Sciences and the Institute of Medicine, with a host of awards and countless publications to his name, Kaelin continues his work in the lab to seek to understand how mutations affecting tumor-suppressor genes cause cancer.

He advised young researchers to “keep that wide-eyed wonder and don’t talk yourself out of experiments because the moment you do, its sort of a road to perdition.”

But Kaelin closed his talk with a “soapbox pitch;” an emotional appeal that drew on his up-close experience with the ravages of cancer. In 2014 Kaelin lost his wife Carol, a renowned breast cancer surgeon, to a brain tumor (glioblastoma) after she’d survived breast cancer.

He issued a warning to young scientists of the lure of false Gods — i.e. the trap of focusing too much on whether their papers appear in a prestigious journal or if they got this or that prize.

Instead, he argued, “It’s all about whether what you just told the world is true, robust, will stand the test of time.”

“If you are really lucky, occasionally, you will move the field forward because all of us are going to be dealing with this (cancer) at one point or another; statistically everybody here is eventually going to have a loved one who is going to have this awful disease,” he continued. “I can tell you when I was managing Carol’s care I was acutely aware of the fact that almost everything we had available to treat her was based on science that was done 10 or 20 years ago. So, if to you it’s just about the journal, it’s just about how famous you’ve become, please stop because you’re probably becoming a dominant negative.”