Four-Year-Old Rings In A New Start 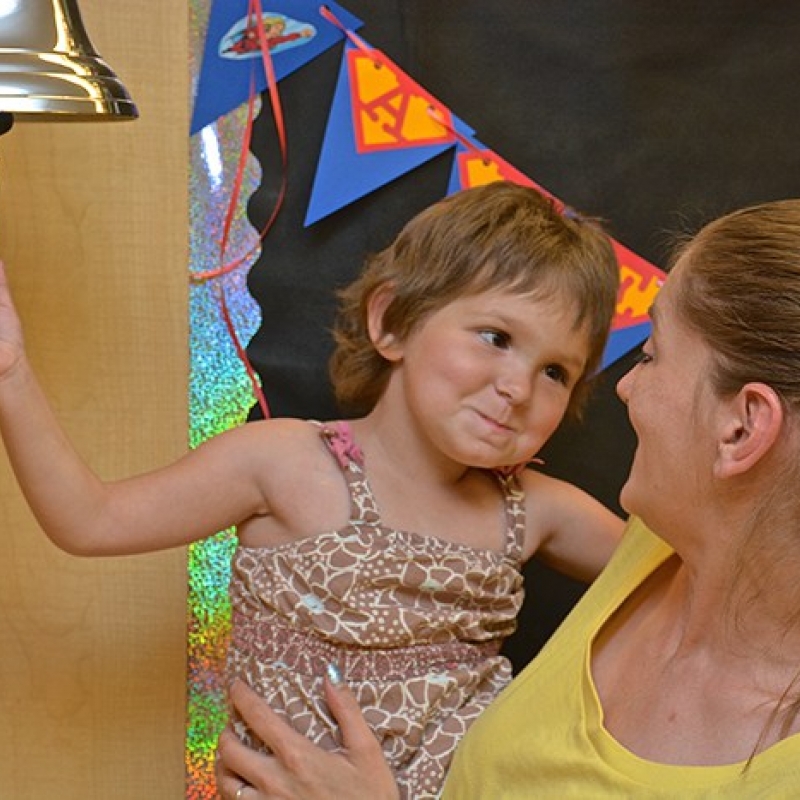 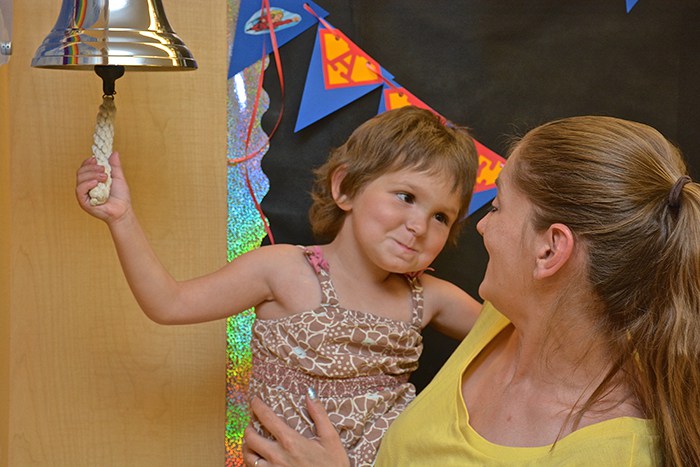 Four-year-old Vanessa Burnette gives her mom, Laura, a sly smile as she rings the End of Treatment Bell. Vanessa, who was treated for stage 4 neuroblastoma at Duke Children's Health Center, was the first to ring the bell after its recent installation.For more than 4,000 years, bells have been used to spread warnings, alerts and good tidings. Over the years, bells have even developed into sophisticated, melodious instruments. But for four-year-old Vanessa Burnette and her mother, Laura, the unpretentious clang, clang, clang of a rudimentary bell has proven to be music to their ears.

On the fourth floor of Duke Children’s Health Center, patients checking in notice a simple bell erected within the clinic. Although at first glance ordinary in appearance, the British-made bell announces a vital message—the conclusion to a long and challenging battle against a formidable foe—cancer. Bob and Trish Verne, members of the Optimist Club of Chapel Hill, have for almost 20 years been championing the fight against childhood cancer. Through one of their contacts the couple learned about the End of Treatment Bells organization and its efforts to provide bells to pediatric cancer clinics throughout the United Kingdom.

“The final day of any cancer treatment is incredibly significant for patients and their families,” said Trish, who with her husband have three grown children. “When we heard about the British non-profit, we pursued the idea of bringing these very special bells to our own cancer centers in Durham and Chapel Hill.” 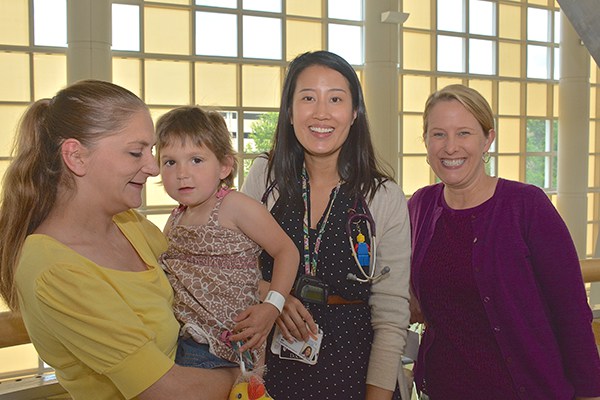 Members of Vanessa's oncology treatment team take a moment to pose with her and her mom, Laura. Pictured from left to right: Laura Burnette, Vanessa Burnette, 4, Sei-Gyung Kim, MD, and Anne Kosem, LCSW, clinical social worker with pediatric hematology oncology. Kosem was instrumental in working with the Vernes to secure the End of Treatment Bell.Vanessa, who recently finished 18 grueling months of treatment for stage 4 neuroblastoma, was the first oncology patient at Duke Children’s Hospital and Health Center to ring the End of Treatment Bell donated by the Optimist Club of Chapel Hill.

“The bell is pretty cool,” said Laura, whose young daughter underwent six rounds of chemotherapy, a total resection, surgery to remove her left kidney, radiation and also a stem cell transplant. “It’s an awesome feeling to be finally done. Ringing the bell marked the moment when Vanessa and our family knew we had permission to move in a new direction—one now focused on health and wellness—not illness.”

The placard on which the bell is mounted features a vivid rainbow leading to a whimsical lavender heart. It’s etched with a simple phrase: “Ring this bell three times well. Its toll to clearly say—my treatment’s done, this course is run, and I am on my way.” 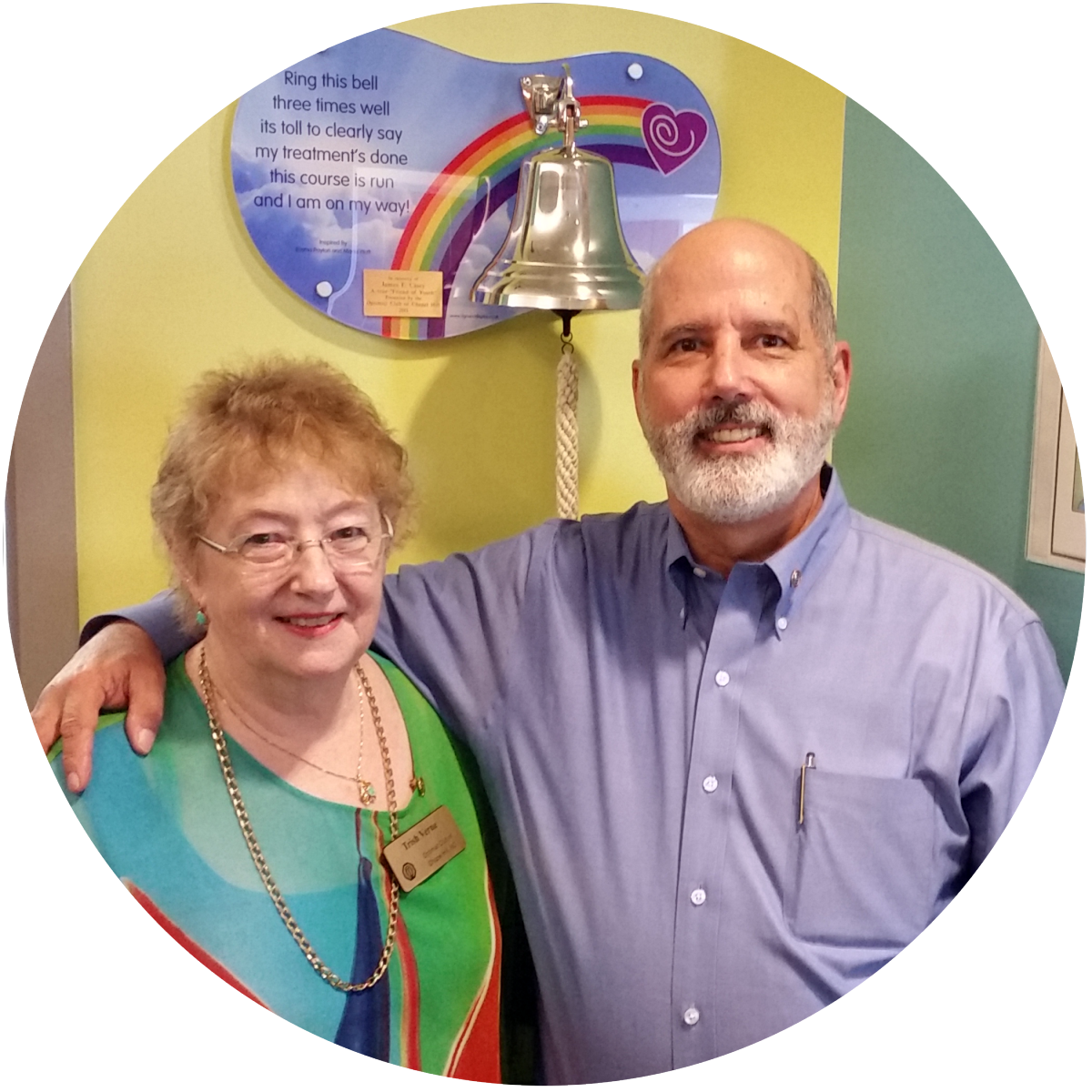 Bob and Trish Verne pose in front of an End of Treatment Bell sponsored by the Optimist Club of Chapel Hill. “When our children were young we were very involved with their clubs,” said Bob, who with his wife joined the Optimist Club of Chapel Hill in 1998. “We enjoy serving and supporting kids, especially those battling childhood cancer.”“We’re pleased to have our very own End of Treatment Bell for our pediatric cancer patients,” said Daniel S. Wechsler, MD, PhD, chief, Pediatric Hematology-Oncology. “The Optimist Club is a phenomenal volunteer organization supporting our shared quest to end pediatric cancer and help families. We are particularly grateful to Robert and Trish for their outreach and support. This bell represents hope for every child for which it tolls.”

Optimist International is a worldwide volunteer organization comprised of more than 2,500 local clubs. Members, like the Vernes, devote themselves to outreach opportunities supporting children in their own communities and beyond. For more information, visit the Optimist Club of Chapel Hill or its parent organization, Optimist International. To learn more about End of Treatment Bells and its mission to equip pediatric cancer hospital, please visit Facebook or go to End of Treatment Bells.