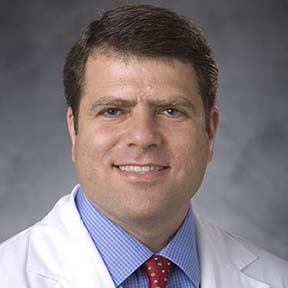 David G. Kirsch, MD, PhD, was recently promoted to Professor of Radiation Oncology and Professor of Pharmacology and Cancer Biology. Kirsch received his MD and PhD degrees in 2000 from Johns Hopkins University School of Medicine.

He received his PhD in Cellular and Molecular Medicine. Then, Kirsch completed an internship in internal medicine at the Greater Baltimore Medical Center and residency training in radiation oncology at Massachusetts General Hospital, which he completed in 2005. He spent four years as a post-doctoral fellow at MIT before being recruited to Duke in 2007.

Kirsch's clinical interests revolve around the multi-modality care of patients with bone and soft-tissue sarcomas. His laboratory interests include utilizing mouse models of cancer to study cancer and radiation biology in order to develop new cancer therapies in the pre-clinical setting.

On March 26, 2014 Kirsch was recognized with the Dean's Award for Excellence in Mentoring and in 2015 he received the Ruth and A. Morris Williams, Junior Faculty Research Prize for groundbreaking research in basic science. To learn more about David Kirsch, MD, PhD, and his areas of focus, visit Kirsch Lab.