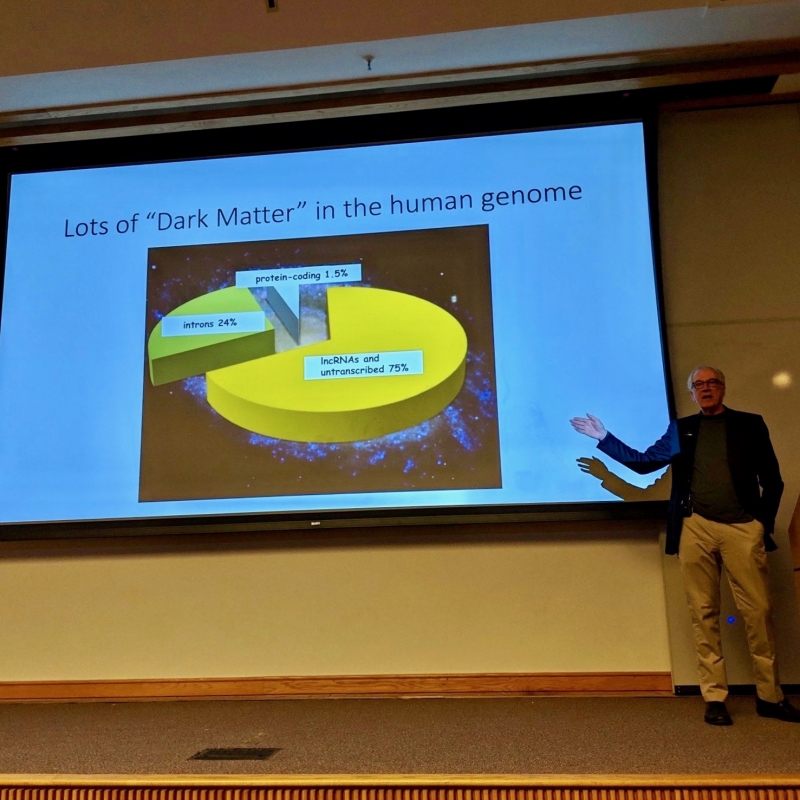 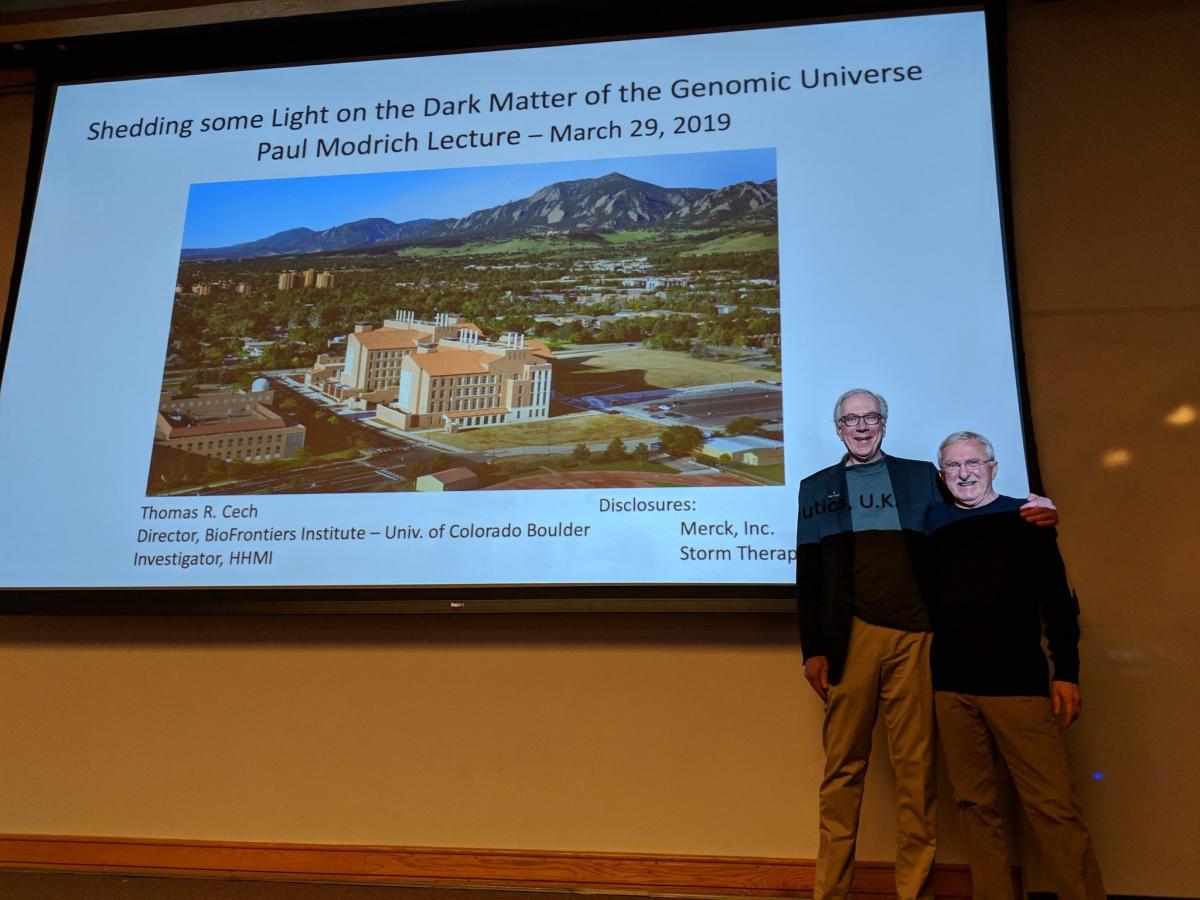 Nobel Prize in Chemistry winners (1989 and 2015, respectively) Thomas Cech, PhD, and Paul Modrich, PhD. (photo by Lindsay Key)Thomas R. Cech, PhD, director of the BioFrontiers Institute at the University of Colorado Boulder, delivered the Paul L. Modrich, PhD, Distinguished Lecture today at the Bryan Research Building to a packed auditorium of faculty and staff. The topic: “Shedding Some light on the Dark Matter of the Genomic Universe.”

Cech, with Sidney Altman, PhD, was awarded the Nobel Prize in Chemistry in 1989 for “the discovery of the catalytic properties of RNA.” Modrich, whom the lecture lecture honors, is also a Nobel Prize winner. A faculty member of the Department of Biochemistry since 1976 and a member of Duke Cancer Institute, Modrich shared the Nobel Prize in Chemistry in 2015 with two other scientists for "mechanistic studies of DNA repair” — a discovery that’s increased understanding of how the living cell works, the causes of cancer, and the aging processes.

Before the Cech talk began, the chair of the Department of Biochemistry, Richard Brennan, PhD, presented Modrich with a commemorative plaque acknowledging the establishment of the lectureship in 2017. Modrich's former students and postdocs as well as friends and colleagues from around the world established the lectureship.

“Their kindness and generosity has allowed us to bring a great speaker, Tom Cech,” said Modrich introducing the speaker. “I first met Tom 45 years ago at the U.C. Berkeley Chemistry Department where he was a student in John Hearst’s lab… Since that time, Tom has done a lot of beautiful things. Tom discovered catalytic RNA and I think it’s fair to say that discovery changed the way we think about biology. It certainly did for me by providing not only a new perspective on the nature of biological catalysis but also a plausible basis for thinking about chemical mechanisms for the origin of life.”

The Cech lab has also been a major contributor in understanding telomeres and telomerase function (there’s a reactivation of telomerase in 90 percent of human cancers) and long noncoding RNAs (incRNAs) — the “dark matter” which Cech went on to detail in his one-hour talk.

“It’s been a great visit; to see so many old friends, meet some new Duke faculty and spend some time with the students,” said Cech, first thanking the Department of Biochemistry for hosting him over the past couple days. "This is my fifth seminar trip to Duke — that either shows that you are gluttons for punishment or I don’t know what. But on every one of those trips, including this one, I've sat in Paul Modrich’s office and he has talked about amazing experiments that he has done — always very creative and always drilling deeply into mechanism. Particularly, I remember his experiments investigating proteins, how such mismatch repair proteins would remember which strand of DNA they needed to track along in order to make the correct repair rather than the incorrect repair. What stellar contributions he’s made to nucleic acid protein interactions — all before we knew how important mismatch repair was going to be for human cancer, which was a whole other era of his career.”