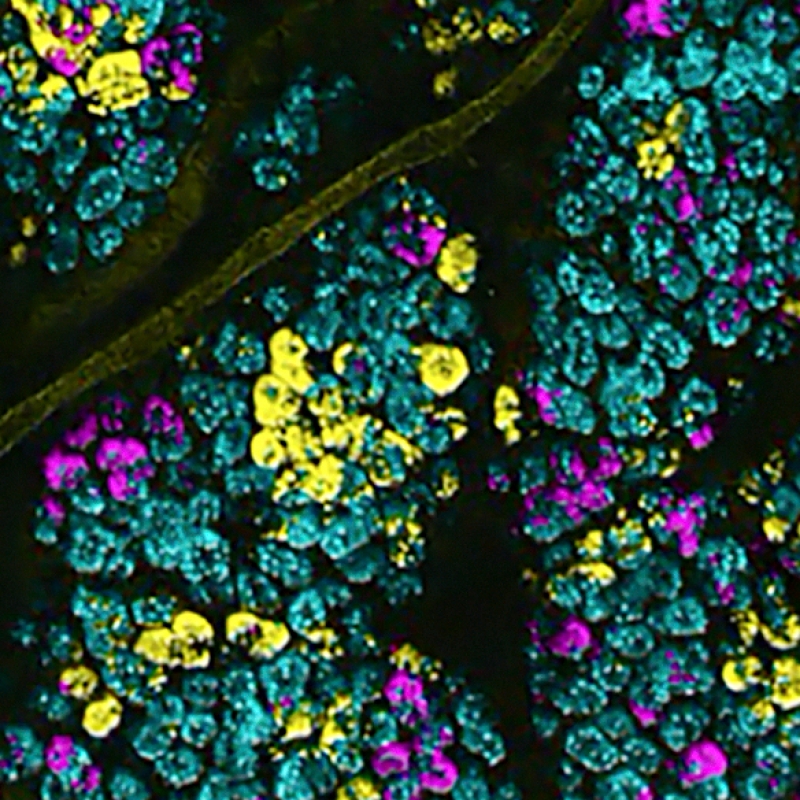 Duke Cancer Institute researchers have observed how stem cell mutations quietly arise and spread throughout a widening field of the colon until they eventually predominate and become a malignancy.

Using an innovative modeling system in mice, the researchers visually tagged colon cancer mutations by causing stem cells to glow. Mutations found in colon cancer were then visualized in the animals, illuminating a sort of tournament-to-the-death underway in the intestine in which one or another mutation prevailed over the others to become the driving force of a malignancy.

“This study provides new insight into the previously invisible process in which mutant precancerous stem cells spread throughout the colon and seed cancer,” said Joshua Snyder, PhD, assistant professor in the departments of Surgery and Cell Biology at Duke and corresponding and co-senior author of a study publishing online Dec. 2 in the journal Nature Communications.

“Our technique sets a firm foundation for testing new therapies that interrupt this early, pre-malignant process. We hope to one day target and eliminate these stealth precancerous cells to prevent cancer,” Snyder said.

When transferred to a mouse, the rainbow of fluorescent stem cells could be visually tracked, revealing the cellular and molecular dynamics of pre-cancerous events.

In this way, the researchers found key differences in how the intestinal habitats common to babies and adults grow pre-cancerous fields of mutant cells. At a critical period, newborns are sensitive to the effects of mutations within intestinal stem cells. This insidiously seeds large fields of premalignant mutated cells throughout the intestine -- a process called field cancerization -- that dramatically increases cancer risk. These fields of mutated cells can grow and spread for years without being detected by current screening technologies; often, they remain harmless, but under proper conditions, can rapidly become cancerous later in adults.

The researchers also observed that some colon cancer mutations found in patients can lead to a striking increase in the fertility of the environment surrounding precancerous fields. Ultimately, this leads to the rapid spread of fields throughout the intestine, with lethal consequences.

Certain common mutations that arise from external sources, such as an injury or an environmental exposure, could also disrupt the environment surrounding the stem cell and lead to the rapid growth and spread of precancerous fields. These occurrences can be especially lethal in adults and occur much more rapidly than previously expected – as if dropping a match on a drought-stricken forest.

“Field cancerization has been suggested to be the defining event that initiates the process of cancer growth, including cancers of the breast, skin and lung,” Snyder said. “Our technique allows us to model how premalignant cells compete and expand within a field by simple fluorescent imaging, potentially leading to earlier diagnosis and treatment.”

Snyder said additional studies are underway using the fluorescent barcoding to view the cancer fields in breast cancer, aiming to learn more about when a pre-cancerous condition known as ductal carcinoma in situ is driven by malignant vs. benign mutations.