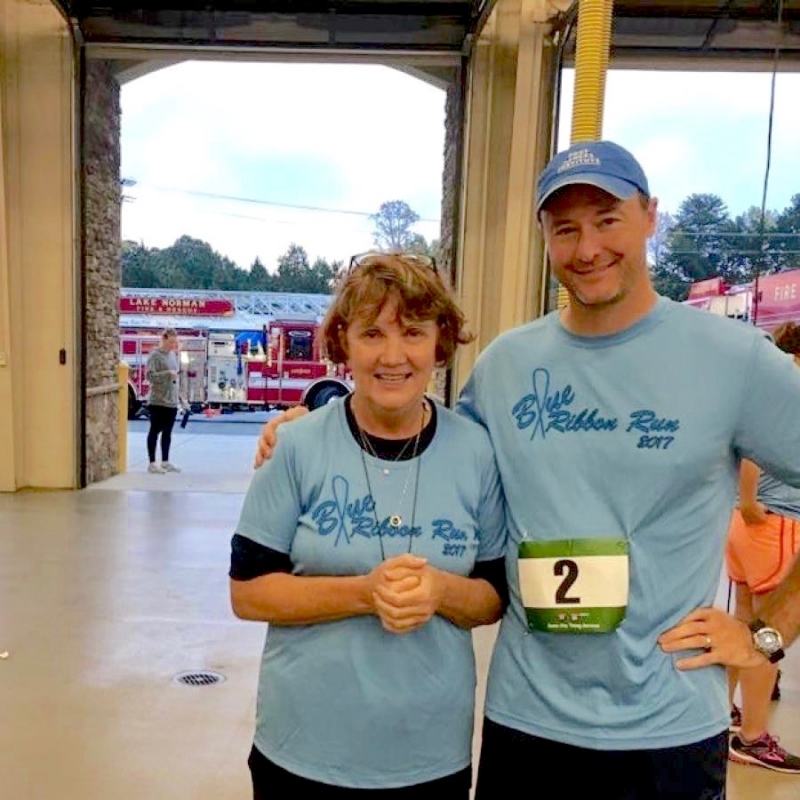 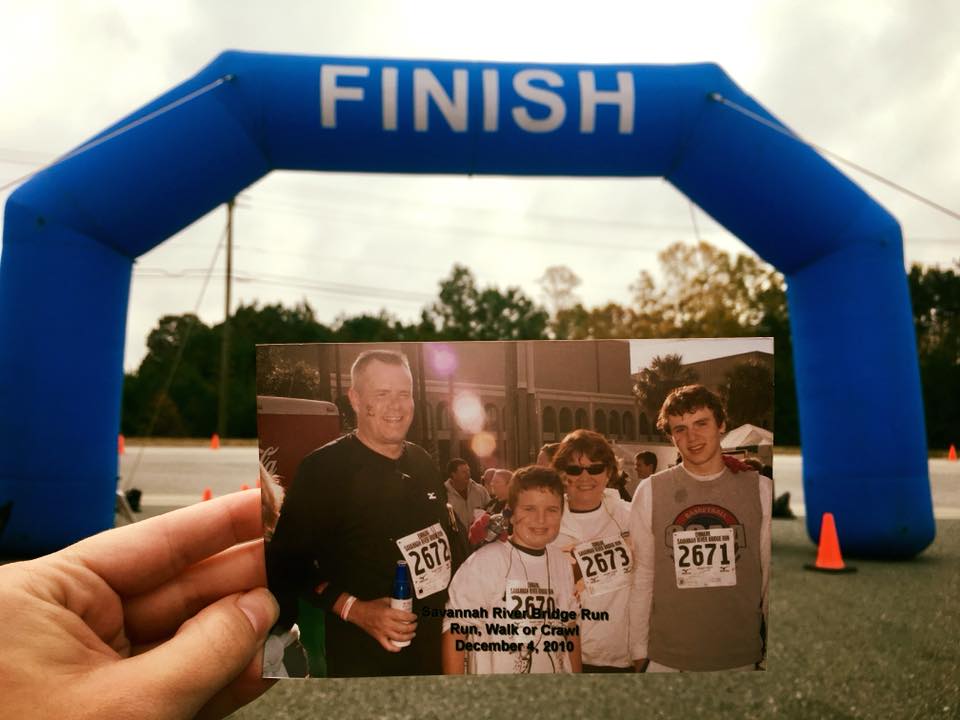 A picture of the Symons family finishing a 5K in Savannah, GA, is being held at the finish line of the 5K they held in memory of their husband and father, Rick.The Symons family has taken the famous song lyric “from sea to shining sea” to an entirely new level. Rather than simply traveling from state-to-state to see America, the family committed to literally running from coast-to-coast by competing in each of the 50 states. However, along the way they unexpectedly hit a devastating detour – a diagnosis of cancer.

In May 2013, Rick Symons, 53, attended his yearly physical when an elevated PSA (prostate-specific antigen) level required further examination. A few days later, even though without symptoms, Rick was diagnosed with stage two prostate cancer.

“Rick was really good about going to the doctor,” shared his wife, Susan. “Overall, he was a healthy and active man. Each day you could find him out on his bike or running through the neighborhood. Because he had no symptoms it caught us all off guard.”

Within three weeks of his diagnosis, he underwent a prostatectomy near his hometown of Mooresville, North Carolina. However, post-surgery, a pathology report confirmed positive margins and a PSA level four, meaning the cancer was still present.

After a prostatectomy, a PSA level should be undetectable. When a PSA level is still present, this is considered PSA persistence – an indicator that the cancer has spread beyond the prostate. It was then that Rick’s doctors realized his cancer was more aggressive than originally suspected.

In August, after giving his body time to recover from the surgery, Rick began radiation treatment. During this treatment, his prostate cancer became more aggressive, with his PSA level rocketing from four to 63, before topping off at 88 in December.

The Symons family realized they needed “something more,” as it had become clear to them that his aggressive cancer needed a correspondingly powerful line of treatment. In January of 2014, after the disease metastasized to his bones, Rick sought expert care from prostate cancer specialist, Andrew Armstrong, MD, McS, at Duke Cancer Institute.

Armstrong is co-associate director of the Duke Prostate and Urologic Cancer Center. He is a medical oncologist and internationally recognized expert in experimental therapeutics and biomarker development in genitourinary cancers, particularly in prostate cancer. As a clinical and translational investigator, he is focused on experimental therapeutics for patients with advanced genitourinary malignancies, particularly with a focus on prostate and kidney cancer and the investigation of biomarkers of response and benefit both in the laboratory and in the clinic.

“Dr. Armstrong provided our family incredible hope,” said Susan. “At Duke, we were able to get access to cutting-edge clinical trials. Rick so wanted to beat this disease, to figure out a way to get better and to be there for his two children. We knew how vital it was to find an oncologist with access to breaking science in prostate cancer care and research.”

“Rick’s cancer responded positively to the clinical trial” said Armstrong. “On the trial, his PSA dropped from 88 to less than one. He finally had a good outcome with this new hormonal therapy trial, compared to the outcomes he saw from surgery and radiation.”

However, Rick wasn’t out of the woods yet. In November, with Rick no longer responding to this hormonal therapy, Armstrong started Rick on a sequence of several different approved treatment options that included immunotherapy, chemotherapy, and a newer approved hormonal therapy. Unfortunately, Rick’s cancer developed resistance to all of these approved therapies over time and he needed a new approach.

In April, he underwent molecular profiling at Duke and through a novel liquid biopsy assay to identify  gene mutations in his cancer that might lend themselves for a new treatment, an approach known as personalized medicine.  About 25 percent of men with advanced prostate cancer benefit from such molecular tests of their tumor or their germline to examine for both hereditary causes of prostate cancer but also to identify potential Achilles’ Heels for treatment.

The following month, he enrolled in a Duke-pioneered clinical trial, Radium Pharmacodynamic Study (Radium 223). This trial was investigator-initiated by Armstrong and treated Rick’s disease by inserting radium into the bones, targeting the prostate cancer. Simultaneously, the trial was examining how radium affected the growth of prostate cancer for clinical research at Duke.  Recently, data from this study was presented in San Francisco, finding that prostate cancer cells can be genetically rewired to be like bone forming cells, leading to enhanced radium uptake and bone targeting, and suggest that drugs that block this process, called osteomimicry, may help to better treat or prevent bone metastases in men with prostate cancer.

Radium 223, a radiopharmaceutical drug, omits radioactive material that is taken up in the bone by the prostate cancer cells. This effect can best be explained by the periodic table of elements; radium is listed underneath calcium in the table, and the close relationship between the two elements explains why the body recognizes radium as calcium. Bones absorb calcium to mineralize and are similarly tricked into absorbing radium. The prostate cancer cells themselves are behaving like bone cells, which allows the radium to target cancer cells directly in the bone and kill them.

Rick stayed on the RADIUM 223 trial for the next six months, before his cancer again started behaving erratically. Rick’s molecular testing results came back and highlighted a genetic alteration of a key cancer causing gene called CDK4, that had extra copies, and which may lend itself to direct targeting with CDK4/6 inhibitors.  This gene makes cancer cells divide and spread rapidly, and new drugs, such as palbociclib, ribociclib, and abemiciclib are available now in breast cancer based on their ability to target this pathway and improve outcomes. Rick’s mutation opened the door to new investigations in prostate cancer to apply this approach to specifically targets the mutation.

“It’s extremely generous of a patient to give of themselves and participate in research studies,” said Armstrong. “We hope that all these research studies benefit patients, and sometimes we learn information that will be used for future patients through their participation. Rick was able to fight through all approved and several non-approved therapies including several rounds of chemotherapy.  However, his contributions to science continue to this day with the goal of helping men like Rick beat aggressive prostate cancer.”

In January 2016, at just 55 years old, Rick passed away after a nearly three-year battle with prostate cancer. Armstrong and his team at Duke are planning a new clinical trial in 2018 based on discoveries from the studies that Rick participated in, using therapies in combination that target these genetic pathways that lead to aggressive disease.

“Rick was a selfless man who was always looking out for those around him,” shared Susan, as her voice cracked and a tear rolled gently down her cheek. “He would have given anything for his family, and he underwent that final study not in hopes that he would be cured, but to push research further down the road. He wanted others to understand that prostate cancer is not always a slow-growing disease, and also equip Dr. Armstrong with additional genomic information that would help others.” 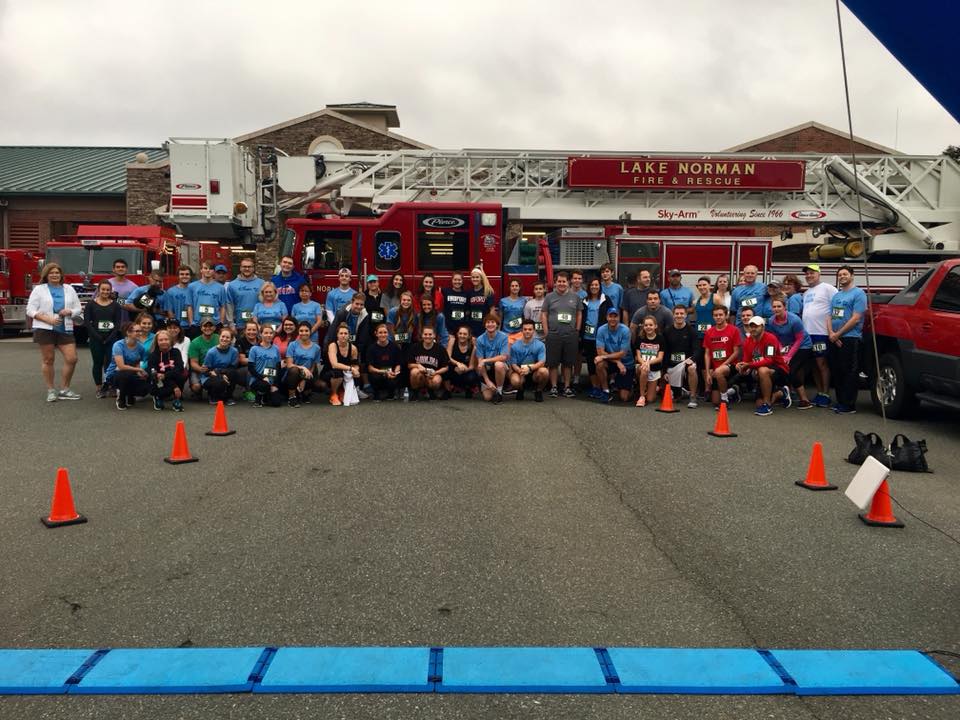 Runners prepare for the inaugural Blue Ribbon 5K held in memory of Rick Symons.Despite their challenges of cancer, the Symons Family was able to complete races in 35 of 50 states. Inspired to finish the remaining 15 together, the family even hosted a 5K run in Rick’s memory.

“We wanted to host a 5K in memory of Rick and his battle,” said his wife. “The prostate cancer research being done at Duke is game-changing, and our family wanted to contribute to Rick’s legacy and support the center that gave us so much hope.”

In November 2017, surrounded by friends and family, the Symons hosted the first “Blue Ribbon 5K,” in honor of Rick. The event raised over $12,000 for prostate cancer research at Duke Cancer Institute.

“I know Rick would be so proud of everyone – friends and family – who pitched in to make this event a success,” said Susan. “Leading up to the day, we weren’t sure if it was going to rain but it turned out to be a beautiful morning. While a day doesn’t pass without wishing he was here, I know he is looking down on all of us smiling. I mean, how blessed are we that we get to honor the legacy of such a great man?”