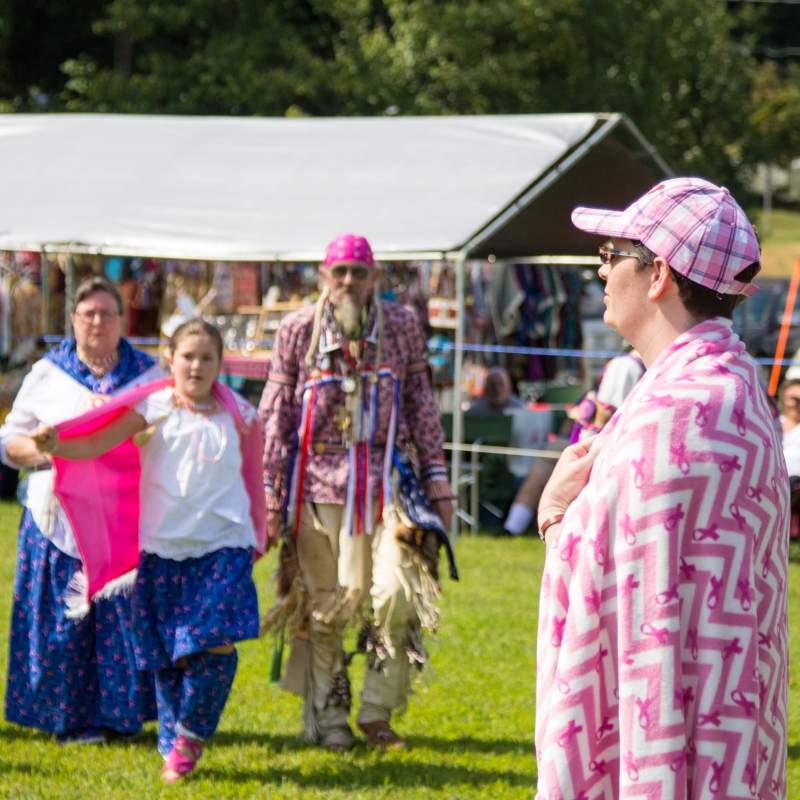 Jenny Norris, 35, was still reeling from a recent separation from her husband of 13 years when she received the staggering news that she had breast cancer. But if that wasn’t enough to navigate, she then, after genetic testing, learned she had Li-Fraumeni syndrome, a rare inherited genetic disorder increasing her risk of developing other types of cancer over her lifetime. 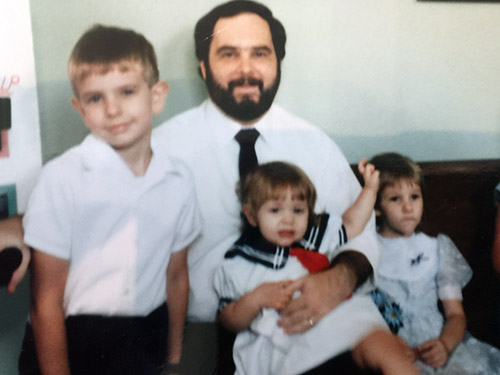 Jenny Norris (right) is pictured with her father, Michael Farlow, and her siblings. Farlow, who had osteogenic sarcoma, passed away when Norris was just 4 years old.

“I’m not going to lie – it was a devastating blow,” said Norris. “To be honest, the news wasn’t a complete surprise. My grandmother on my father’s side was diagnosed with breast cancer, treated, and then years later diagnosed with leukemia. Dad, who I barely remember, also battled cancer.”

In fact, Norris’ father, Michael Farlow, then 25 years old, was at Duke receiving his first round of chemotherapy for osteogenic sarcoma at the same time his wife, Rebecca Dalton, gave birth to Norris at Duke Regional Hospital.

“It was a truly difficult time,” remembered Dalton, who had three children with Farlow before he succumbed to the effects of his cancer at just 29 years old. “We now suspect that Michael also had Li-Fraumeni syndrome.”

According to the Li-Fraumeni Syndrome Association, people with Li-Fraumeni syndrome can develop multiple cancers in childhood or as young adults. Since first identified in 1969, researchers have discovered the syndrome is, in just about all cases, caused by a mutation in the p53 tumor suppressor gene.

"It is not clear whether or not breast cancers with Li-Fraumeni syndrome have a different prognosis than similar non-inherited breast cancers," said Noah D. Kauff, MD, director of Clinical Cancer Genetics at Duke. "However, the risk of future cancers, both of the breast and other organs, is much higher in women with Li-Fraumeni syndrome than those women without an inherited susceptibility."

Kauff went on to say that the fact that Jenny’s predisposition has been identified will allow for screenings with the hope of detecting cancer early when it is more likely to be treatable and curable.

Norris, who has a degree in Culinary Arts, is a full-time food production associate for Duke and a weekend chef with the Root Cellar Cafe in Chapel Hill, North Carolina. She was working her weekend job when she received that fateful call from her surgical oncologist telling her she had breast cancer. It was Oct. 28, 2016. Without a tear or even a word, Norris returned to the kitchen and finished her shift.

Hesitant at first to share with others, Norris eventually found the courage to first tell her family, and then share with friends. She said the outpouring of support has been “overwhelming.”

“It’s better to just get it out,” said Norris, who has made use of the medical family therapy service offered at Duke. “After sharing on social media, a loved one sent me a message telling me that she had recently been diagnosed with breast cancer. Our shared experience brought us closer together.” 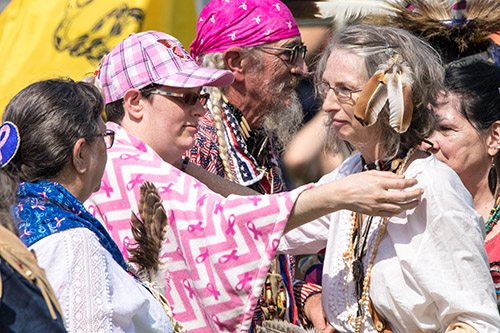 At an August pow wow, Jenny Norris extends a hug to a participant who joined her family in the sacred ring in honor of Norris' battle against breast cancer. "I was so moved to see so many enter the ring to support me," said Norris. "It was healing." Norris’ mother, her step-father, Ken; niece, Maecyn; and nephew, Lucas, participate in pow wows, reunions with native family, across the state. The four dance within a ceremonial ring.

When Maecyn asked Dalton if she could dance for her Aunt Jenny, the family decided to dedicate a year of sacred dancing to Norris and all others battling cancer. Dalton and her husband designed special regalia, the clothing worn by the family while dancing, employing pink-hued fabrics to bring awareness to the breast cancer cause.

“Every step within the circle is a prayer,” said Dalton, who is of the Eastern Blackfoot descent. “When we dance, we’re not performing. We are in fact praying and worshipping Creator.”

To date, Norris has undergone a mastectomy of her left breast and six rounds of chemotherapy. She also receiving Perjeta and Herceptin infusions to treat HER2 positive breast cancer. Given her very high risk of developing a second (new) cancer in her other breast, Norris has elected to undergo a risk-reducing mastectomy.

Her co-workers at the Root Cellar have supported her throughout her treatment, helping to keep her spirits high and sending her home with healthy take-out meals to cover the week ahead.

“I hope good can come out of all this,” shared Norris, who recruited friends, co-workers and family members to participate in this year’s Making Strides Against Breast Cancer walk. “If I leave here affecting others, I’m good. I don’t want to be rich. I don’t want to be famous. I just want to make a positive impact on someone else’s life.”

In the meantime, Norris is defiant. Her fight isn’t over, but unless she hears that final ring of the bell, she’s in the ring, all-in, doing everything she can to raise awareness and funds in her personal quest to knockout cancer.