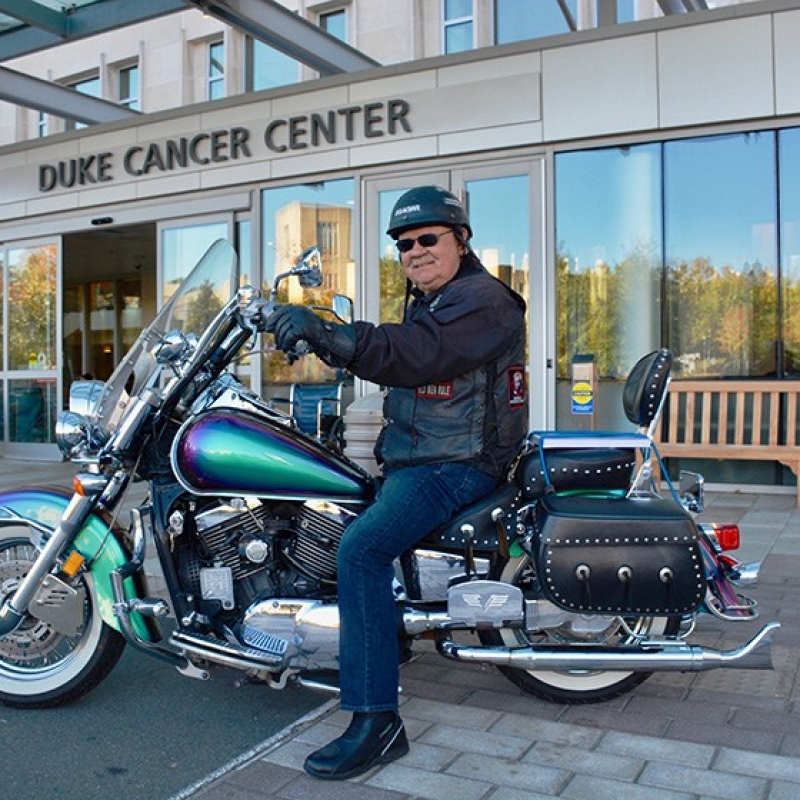 Ronald Knowles, 68, remembers the day a new patient appointment with Duke Primary Care physician assistant Leanne Owens changed his life. Owens was going over his history, including his COPD (chronic obstructive pulmonary disease), and asked him if he smoked and how much.

He said he guessed two-to-three packs per day “depending on what kind of day I’m having.”

“I told her that if I needed a pack of cigarettes I could just reach up and get one,” he said, “and whenever I lit one, I still had one burning in the ash tray.”

Knowles estimated he’d smoked for 50 years. He started as a teen, then continued smoking through 14 years of military service, a decades-long career with General Telephone in Durham, and into “early retirement” when he bought three North Carolina convenience stores and a truck stop.

“I was running between all of those shops seven days a week and I had just started selling them off and gotten down to one store at that point,” he said. “I was ready to really retire.”

Considering him at high-risk for lung cancer, Owens offered to sign him up for a spiral computed tomography (CT) scan that can find lung cancers in their earliest stage, when it’s easier to treat. A large national study showed it can reduce the risk of death from lung cancer by 20 percent in current and former heavy smokers, compared to screening using a chest X-ray.

Lung cancer is the leading cause of death from cancer in the U.S. and most cases are caused by smoking. For most patients with lung cancer, current treatments don’t cure it, according to the National Cancer Institute, which is why early detection’s so important. 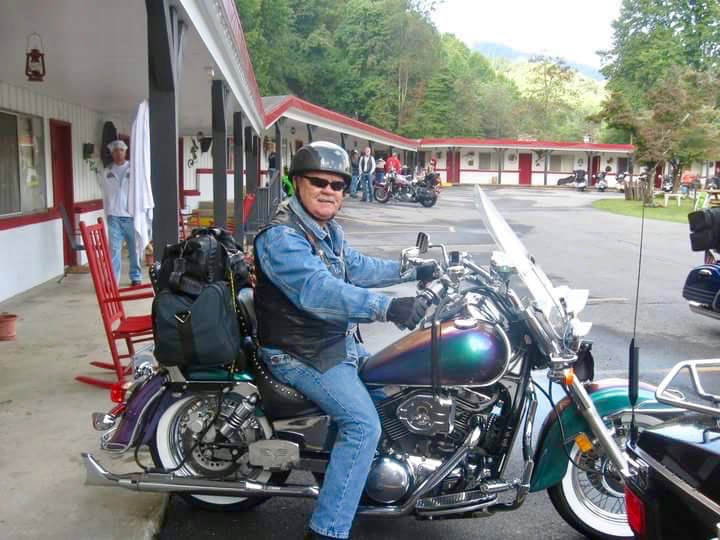 Lung cancer screening caught Knowles’ cancer at an early stage—saving his life and ensuring many miles to come. Here, Knowles heads back out to resume his 10-day, 3,000-mile trip through several states, including Kansas, Minnesota, South Dakota and North Dakota.Duke Cancer Institute thoracic surgeon Betty Tong, MD, MHS, MS, said the United States Preventive Services Task Force recommends screening anybody between the ages of 55 and 80 who are either current smokers or quit within the past 15 years and have at minimum 30 “pack years” or more smoking history; one pack-a-day for 30 years or two packs-a-day for 15 years.

Patients referred for early screening also have to be asymptomatic, explained Tong, and be well enough to undergo potential treatment.

And, on the day of the scan, an advanced practice provider speaks to the patient about the risks and benefits of screening.  For people who are currently smoking, patients will also discuss smoking cessation with the provider, who has had extra training in helping patients quit.

Knowles recounted the day of his July 2012 scan.

“My surgeon Dr. Mark Onaitis came out afterwards to show me the screening results and explained to me, ‘Mr. Knowles you’ve got cancer in your left lung, top lobe’,” he said, adding that the doctor was also able to see visible lung damage from acid reflux. “He said, ‘you know I’ve got a cure for both of them; we’ll start with the cancer first and then we’ll work on the acid reflux. You’re the boss. How’s tomorrow for surgery?’”

Knowles never had to follow up with any chemotherapy or radiation treatments and the cancer didn’t spread or come back.

“The PA that recommended all this to me saved my life,” he said. “It was really quite a feat as far as I was concerned.”

At the time he was going through lung cancer surgery, his wife Brenda was being treated for breast cancer. Today they’re both cancer-free. 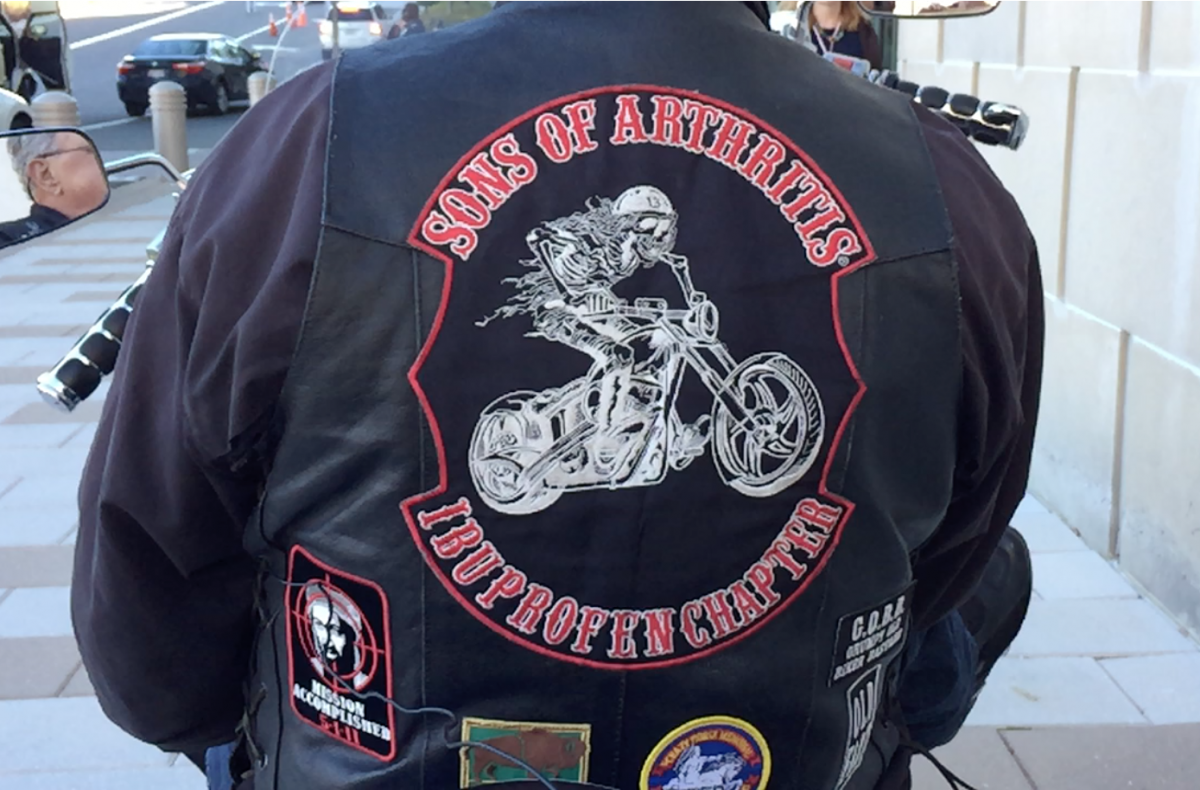 No stranger to humor, Knowles playfully admits that like most bikers, he is a member of a motorcycle club (MC). “In fact,” he says with a chuckle, “I’m the president of the Sons of Arthritis, Ibuprofen Chapter, of which we have six members.“The Duke Cancer Center took care of us and we’re both so grateful,” said the grandfather of six.

Ever since, Knowles has been an evangelist of sorts, urging several of his friends in the convenience store business, some of whom are heavy smokers, to go get checked out and assuring them “it’s not painful at all.”

Did his lung cancer scare of lung cancer convince him to quit smoking? You better believe it.

“I quit,” he said, laughing. “Just as soon as I saw those pictures, I quit. Right then. I haven’t smoked a cigarette since.”

Knowles reflected: “It was hard. It was just the fear I think more than anything else. It will scare you to death when you see that cancer.”

He said that seeing patients in the hospital who had stage four lung cancer and their limited options also had an impact on his decision to quit.

Less than a year after surgery he took off in his shiny customized Kawasaki Vulcan 1500 cruiser on a 10-day trip from Kansas City to Minnesota, North Dakota, South Dakota, and Wyoming. He toured Mount Rushmore, the Crazy Horse museum, and Badlands National Park with some friends and “had a magnificent time.”

Since then he’s taken several other long  motorcycle trips. He follows up with Tong once a year.

If patients do discover they have lung cancer after a screening, she assures them they will find themselves in good hands.

“From the surgical side, Duke is a pioneer in minimally invasive surgery for lung cancer which gets people back and recovered much faster with less pain and better quality of life than traditional surgery,” said Tong. “In addition, there are several new immunotherapies that are either being trialed or administered as standard therapies for more advanced lung cancers.”

The thoracic oncology clinic at Duke Cancer Center is raising awareness about the benefits of early detection screening. They will have a table in the lobby of the Duke Cancer Center on Nov. 17—the date of the American Cancer Society-designated Great American Smokeout— and answer questions about screening and smoking cessation programs. For more information, or to schedule a lung cancer screening CT scan, please call 919.613.4318.