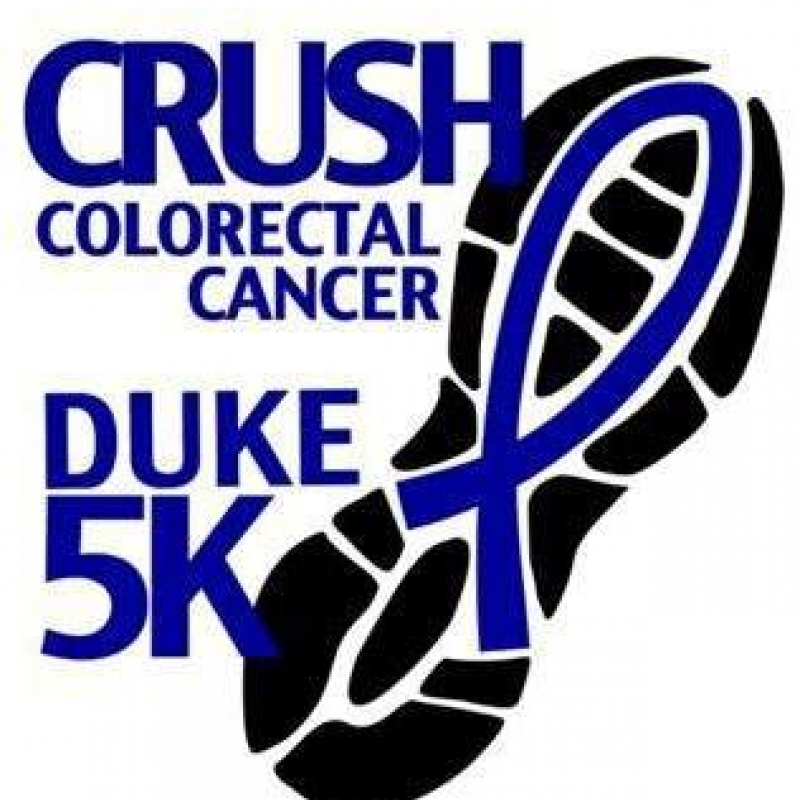 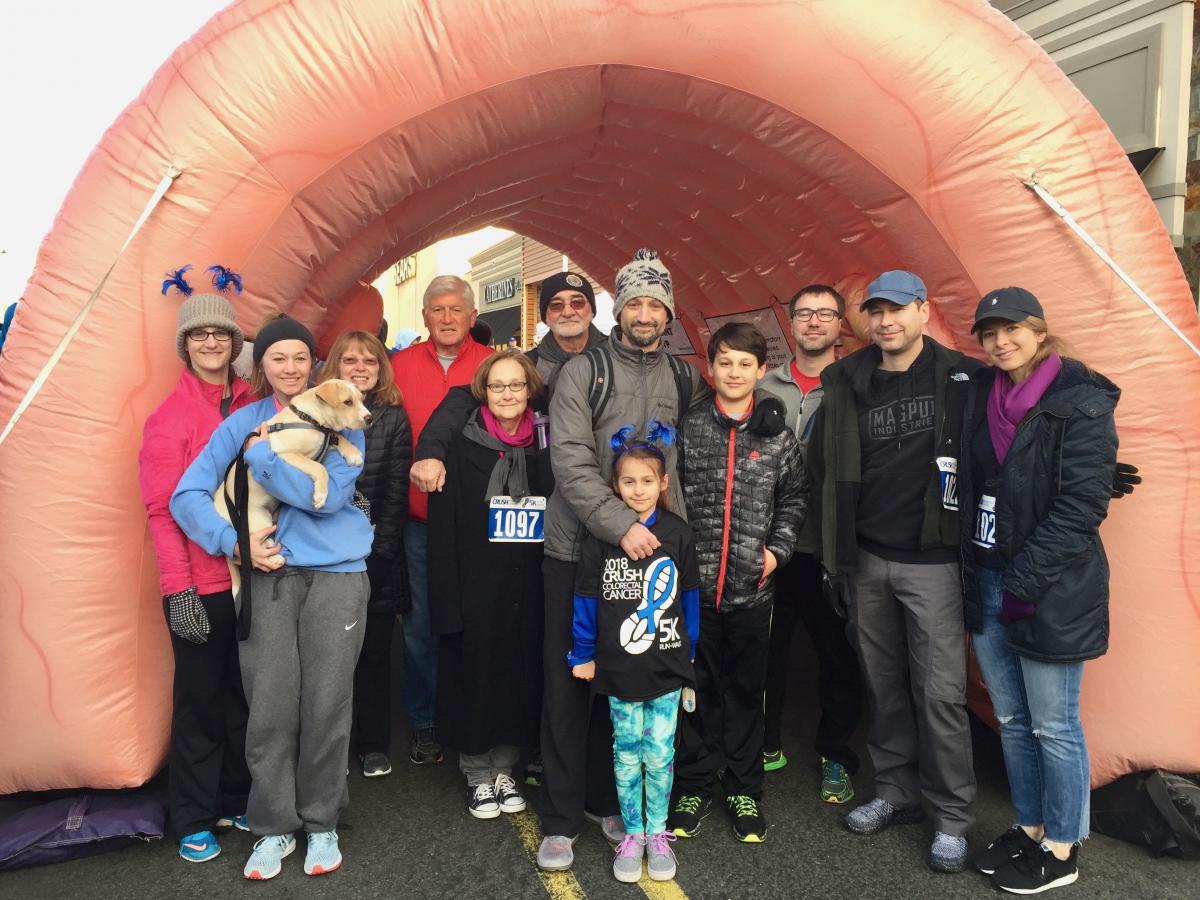 Team "A Little Less Behind" poses under the colon at CRUSH 2018. Colorectal cancer survivor Andy Riley (center with his kids) started the team last year. His team is tops in fundraising this year.Husband and father-of-three Andy Riley, 42, was diagnosed with stage 2 rectal cancer in May 2017. Valentine’s Day this year was the one-year anniversary of his final surgery.

“It’s a pretty big milestone because they tell you that it takes a year, after having the surgery I had, for your system to be back to fully functional; a new normal,” he said.

Previous to his diagnosis, he’d no family history of colorectal cancer, and no pain, but after starting to notice blood in his stool, over the course of several months, he decided to get it checked out.

“That was the scary part, learning that I’d had cancer that whole time when there were no other symptoms,” he said.

He formed a team, creatively named “A Little Less Behind,” and reached out to family and friends to join.

“CRUSH to me is about making people aware,” said Riley. “It’s something I believe in because of what I went through. The biggest shock for me was being diagnosed with cancer so young. I think most people just assume that cancer’s something you get as you get older, especially colorectal cancer. People shouldn’t take for granted that they can’t get colorectal cancer.”

According to the American Cancer Society, colorectal cancer is the third most common cancer diagnosed (when skin cancers are excluded) in men and in women and the second leading cause of cancer death in the U.S., when deaths of men and women are combined. 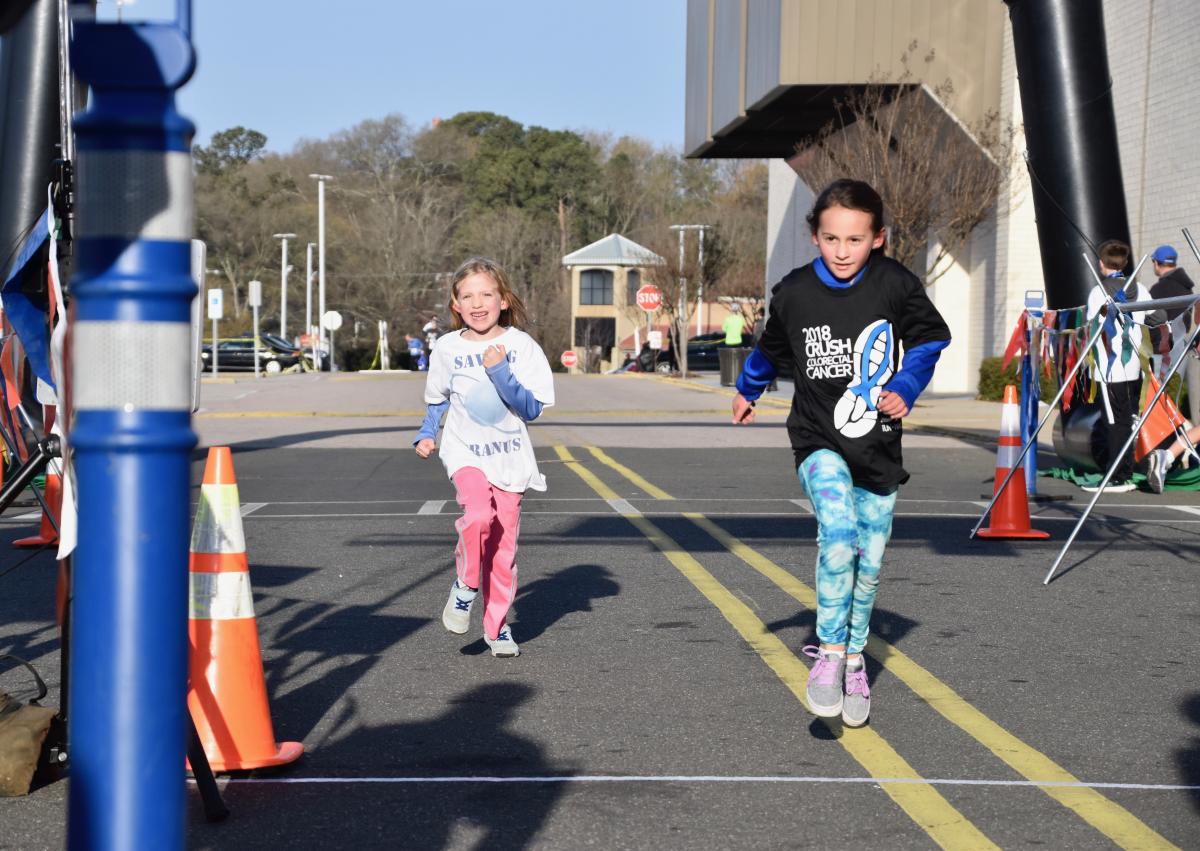 Sydney, the daughter of Duke PA Margot O'Neill, and Izzy, the daughter of colorectal cancer survivor Andy Riley, cross the finish line together at CRUSH 2018.The death rate has been dropping overall in both men and women for several decades. Colorectal polyps are being found more often by screening and removed before they can develop into cancers or are being found earlier when the disease is easier to treat. There's also been an improvement in treatments, including new chemotherapies, targeted therapies and immunotherapies.

However, according to an analysis of colorectal cancer incidence trends from 1974 to 2013 by the National Cancer Institute’s SEER (Surveillance, Epidemiology, and End Results) program, diagnoses have been increasing among young adults in the U.S. Compared with adults born circa 1950, says the study, those born circa 1990 have double the risk of colon cancer and quadruple the risk of rectal cancer. Nearly one-third of rectal cancer patients, like Riley, are younger than 55.

So far this hasn’t changed the National Comprehensive Cancer Network screening guidelines, according to the Colorectal Cancer Screening Panel Chair for the NCCN and director of GI Outcomes Research at Duke, Dawn Provenzale, MD.

That hasn’t stopped Riley from advocating for greater awareness.

“I never expected to have any kind of cancer at 40 years old,” said Riley. “I certainly feel like I’m very blessed based by the fact that it was caught early, so I’m hopeful that I can raise awareness at CRUSH so others can catch it early and have as great an outcome as I did.”

Margot O’Neill, part of Riley’s care team and also the captain of her own CRUSH fundraising team, "Saving Uranus," said she’s “inspired” by the event, which celebrates survivors, like Riley, and honors the patients and caregivers whose lives have been affected by colorectal cancer, while also educating the community.

“As a provider, the CRUSH race day is a heartwarming experience which fills my soul and reminds me of the goodness in the world,” said O'Neill.

The CRUSH Colorectal Cancer 5K Run/Walk will be held on Saturday, March 9. It will start and finish at the Shops at Northgate in Durham, at 1720 Guess Road. Participants are encouraged to form teams or join teams and raise funds. For more information or to register, visit CRUSH 5K.