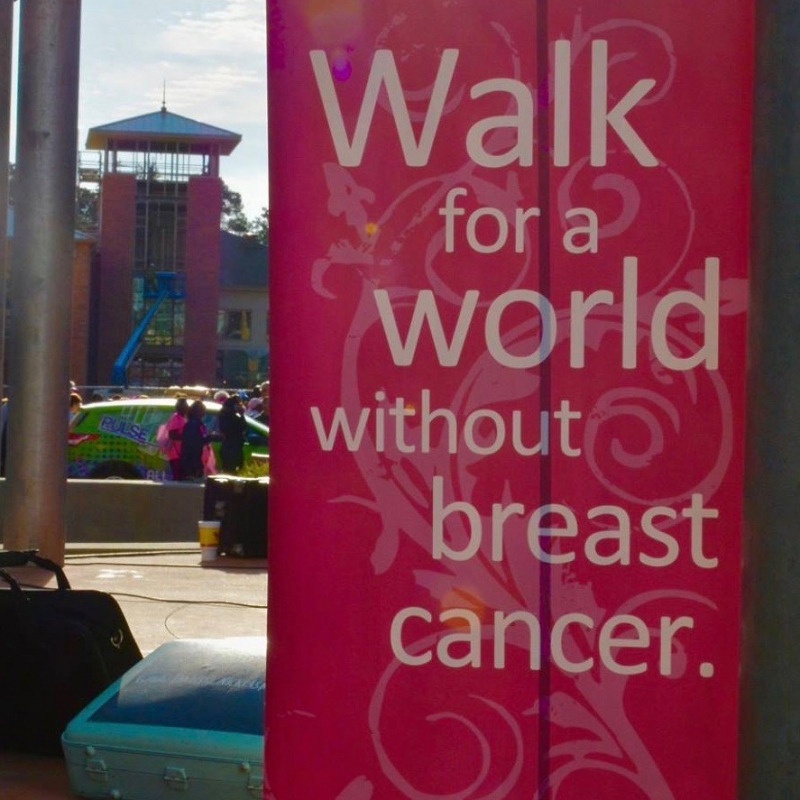 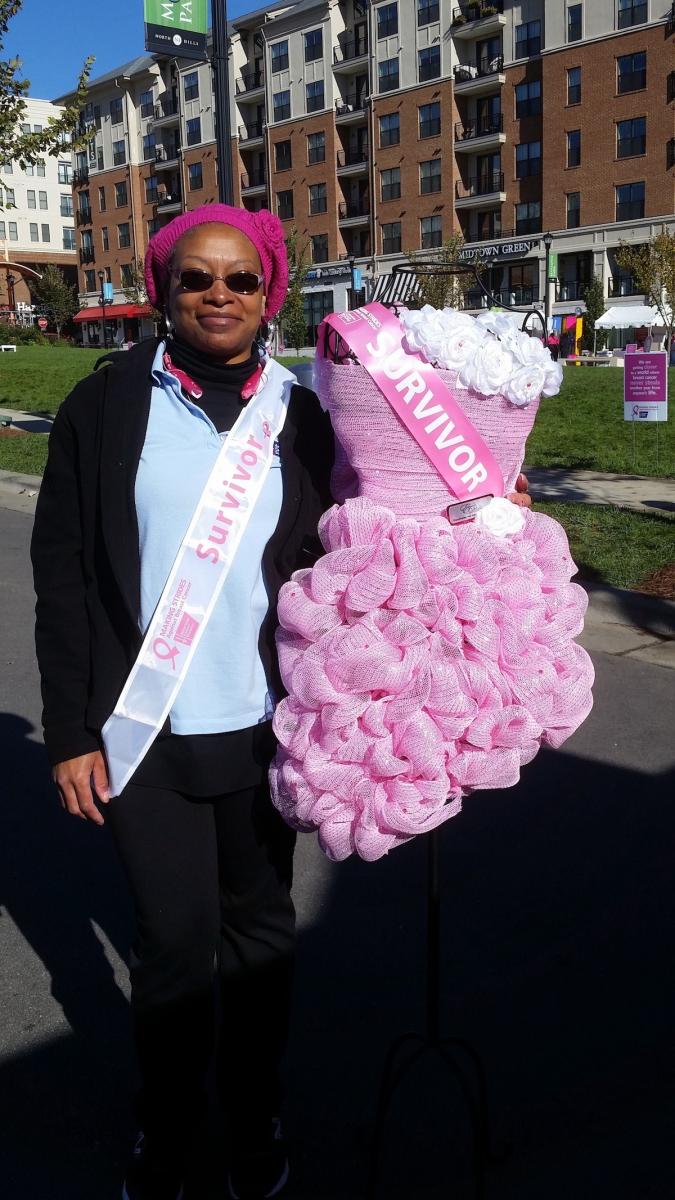 A medical technologist for the State Laboratory of Public Health and Newborn Screening, whose stage 1a triple negative breast cancer was caught early five years ago and cured by her Duke care team, she said she’s “more passionate every day” about her volunteer work.

“So many of my friends who I went to school with have had or have cancer,” she said. “I’m tired of hearing about people getting cancer.”

Taylor helps raise awareness with local and national legislators about the plight of cancer patients and their caregivers as part of the American Cancer Society’s lobbying arm — the Cancer Action Network.

She said it’s especially important now, with the uncertain future of the national government cancer budget, to support cancer research through events like Making Strides.

“The government is talking about cutting millions in cancer research,” said Taylor, who’s been fighting an ongoing battle with colon cancer since well before she was diagnosed with breast cancer. “Those cuts could put us back 20 years, when we are so close right now to having vaccines or cures for cancer. It’s scary. It could be devastating for cancer patients now and those in the future who are yet to be diagnosed.”

Taylor plans to step-up her own fundraising efforts for Making Strides. While in past events she’s been both a walker and an event volunteer, this year she’s started a team — The Fountain of Raleigh Fellowship of Cancer Warriors — and is donating to and helping a couple of friends organize teams of their own.

For those unsure of how to fundraise, Taylor advises participants to start early and reach out through their social networks — such as their church, bowling club, or Facebook group. Do ask them to donate to or join your team, she said, but also consider organizing a fundraiser like a bowling night in which a portion of the proceeds goes to your team. She also suggests asking for donations to your team in lieu of birthday gifts.

Other fundraising ideas, including organizing cook-offs, dine-out-for-a-cause nights, and garage sales to benefit your Making Strides team can be found on the American Cancer Society’s The A-Z of Fundraising Tips. Taylor also recommends downloading the ACS Mobile Fundraising App to make raising and tracking donations easier. 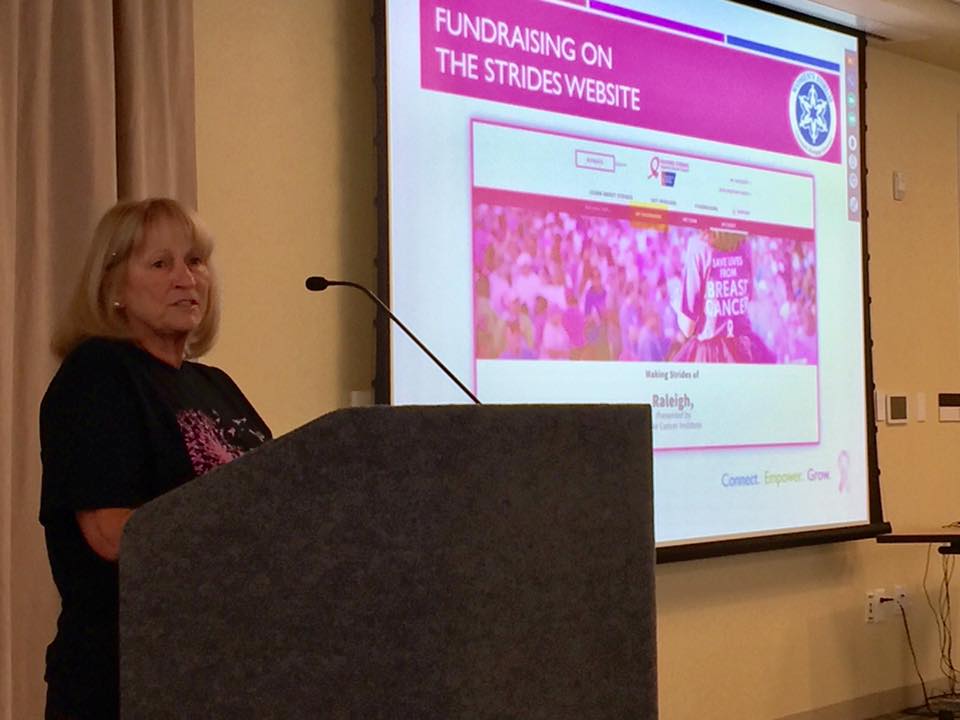 Talley said that once you set up your Making Strides of Raleigh account, it's easy to send emails introducing yourself and your team, even if only to ten friends and family members.

"If each of them gives ten dollars, that's already $100 raised," said Talley at her team's Making Strides kick-off breakfast this month.

Team Genworth, which averages about 60 members, has raised more than $30,000 each year for the past two years for Making Strides of Raleigh through multiple fundraisers, including a bake sale, bingo, BBQ lunch, a golf tournament and a wine and design event. The motto on their team t-shirts reads: "It starts with a wish. It can end with a cure."

Making Strides of Raleigh teams have already raised more than $17,500 altogether toward the American Cancer Society’s goal of $350,000. Fundraising efforts like Making Strides of Raleigh enabled the American Cancer Society’s local chapter to award DCI researchers and clinicians more than $1.4 million total in breast cancer research grants and scholarships over the past fiscal year.

Registration parties for the walk, with give-aways, will be held at Duke Cancer Center Clinic 2-2, from 10 a.m. to 1 p.m. on Wednesday, Aug. 23, and on Wednesday, September 20, and at Duke Women’s Cancer Care Raleigh from 9 a.m. to 11:30 a.m. on Wednesday, Aug. 16. Making Strides organizers will host a kick-off soiree for walk participants, breast cancer survivors and sponsors on Thursday, Aug. 17, at 6 p.m. at the Renaissance Hotel at North Hills in Raleigh.

This year will mark the third year that Duke Cancer Institute (DCI) has been the local presenting sponsor for Making Strides of Raleigh. Participants are encouraged to join Team Duke Cancer Institute for the walk, to be held at Midtown Park at North Hills on October 14, 2017, or form their own teams and raise funds. Team Duke Cancer Institute will be led by oncology breast surgeon and honorary team captain E. Shelley Hwang, MD. Breast surgeon Jennifer Plichta, MD, director of the Breast Risk Assessment Clinic at Duke, will be co-captain. Registration is free. For more information, visit Making Strides of Raleigh.