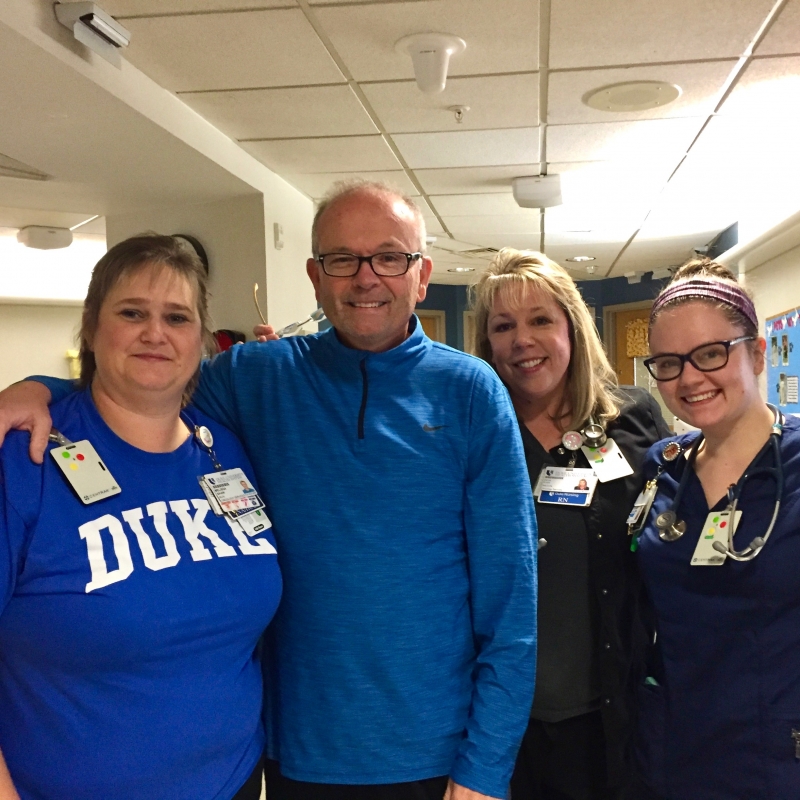 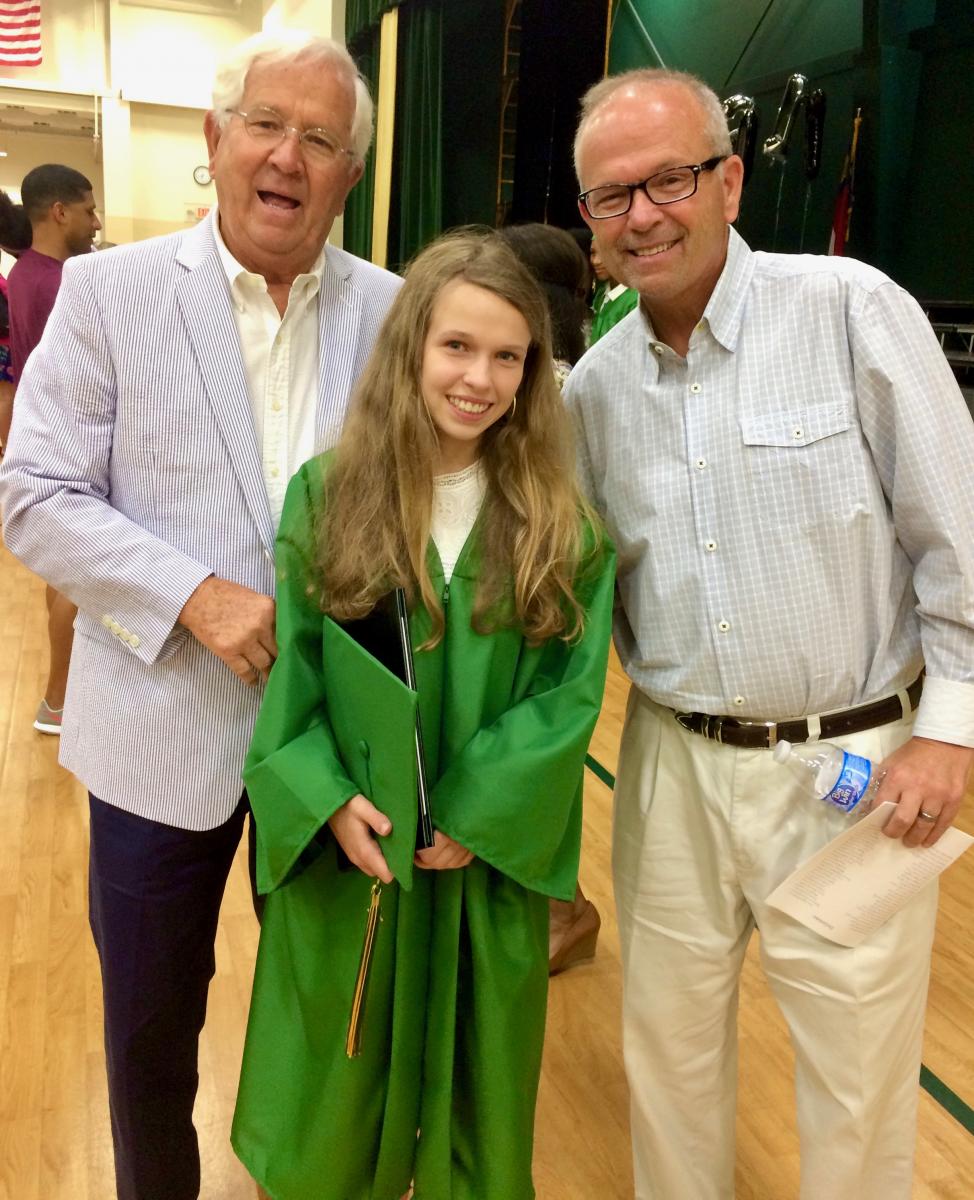 Robert Russell (right) and his father Archie (left) at his daughter's middle school graduation. Robert's father stayed at a hotel with him during his daily chemotherapy and radiation treatments, and returned to stay at Caring House with him during a month of hyperbaric oxygen treatments. In December 2017 Robert Russell brought donuts to the nurses on all three wards of the ninth floor of Duke Medical Center — something he’s been doing regularly for the past three years. He started the tradition because he says it’s the least he can do for those who saw him through the “scariest” couple weeks of his life.

The oropharynx is the middle part of the throat, which includes the soft palate, the base of the tongue, the tonsils, and the side and back wall of the throat.

The first symptoms of oropharynx cancer are typically a lump in the neck, a sore throat and/or ear pain although oropharynx cancer can also be asymptomatic. Physicians say self-awareness and regular visits to the dentist, who does a thorough oral exam, are key to early detection.

Russell had a sore throat and had been coughing up blood for six or seven months by the time he was diagnosed. When his symptoms didn’t go away, following visits to two different primary care physicians, he had asked his wife to look down his throat.

“I think she passed out,” he recounted. “My tonsil was hanging inward and my throat was in bad shape. I went to my ENT doctor the very next day and he said he thought it was cancer, but not bad cancer, and referred me to Duke.”

However, part-way through this outpatient regimen— Russell, increasingly weak, began battling nausea and loss of taste.. He was admitted to the hospital to help manage his symptoms and continued with his treatment during this period.

“It was to the point where I was asked, a few times, if I wanted to talk to a preacher and I finally said yes,” Russell, a father of three, said. “That was scary. I believe in God, but I wasn’t sure what God thought about me.” 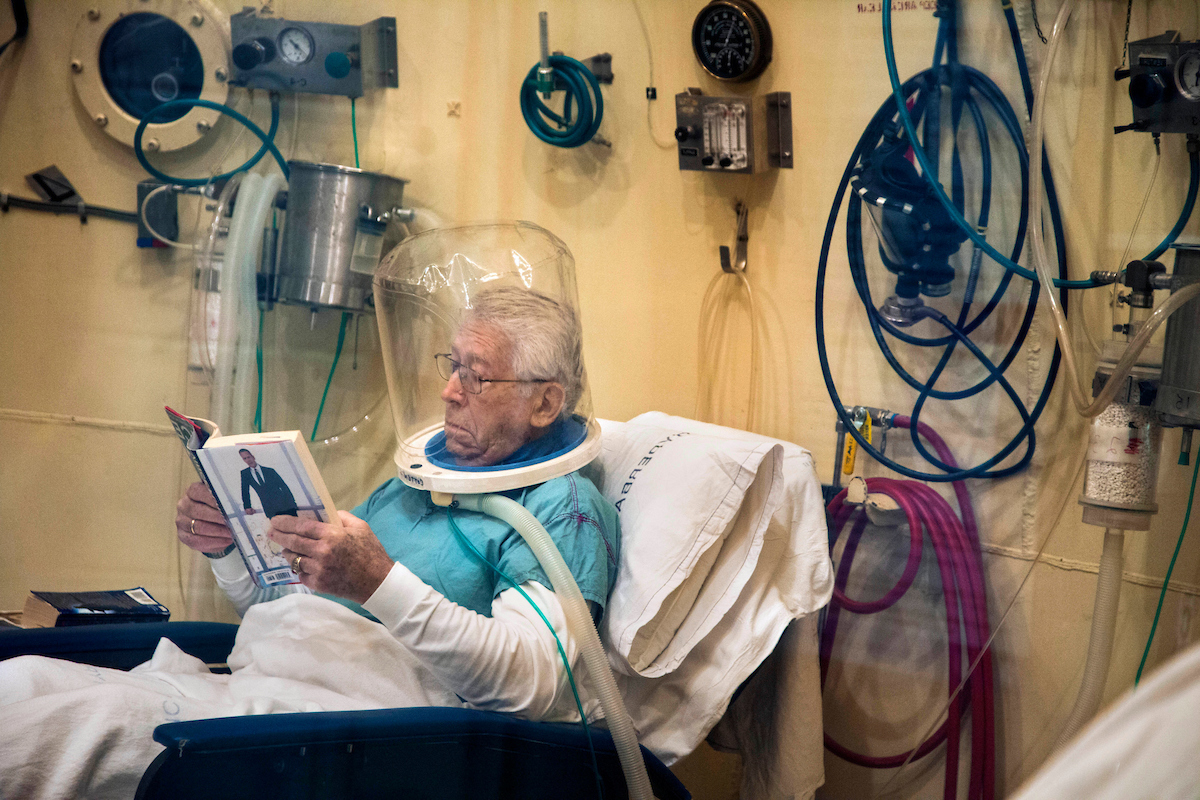 A patient (not Robert Russell) at Duke Clinics is treated in a hyperbaric chamber, like Russell was. Kevin Kraft, RN, nurse manager there, said that about 75 percent of patients treated in the unit at Duke Clinics are patients who had cancer, who received radiation to cure their cancer, but who later suffered negative side-effects of their radiation treatments. (photo by Shawn Rocco)He completed therapy, returned home in September 2014 and was scheduled for regular follow-ups. He went back to work at his two jobs that December — selling Hondas and Atlantic Breeze shutters — but something wasn’t right. His throat and tongue was so raw it burned, he still had no sense of taste, and he didn’t want to eat.

“The first time I went back to see Dr. Brizel for a follow-up, he said ‘Robert, your cancer is gone, but if you don’t eat, you’re going to die, and everything that you’ve gone through will have been in vain,’” Russell recalled.

Russell, who describes himself as “hard-headed,” said Brizel’s “tough love” message got through. He started eating again, but couldn’t gain weight, so Brizel advised a feeding tube. Brizel also recommended Russell try hyperbaric oxygen — a unique therapy that uses pressurized oxygen to enhance the healing of the irradiated tissues in his pharynx that were not healing well.

“If that didn’t work, I may have needed surgery,” said Russell, who ended up making the “dives” in a The Duke Hyperbaric Chamber, at a pressure equivalent of being under 33 feet of sea water, twice-a-day for 35 days. “Thank God it worked.”

About a week after he returned home, his pain largely went away and he got his sense of taste and appetite back. 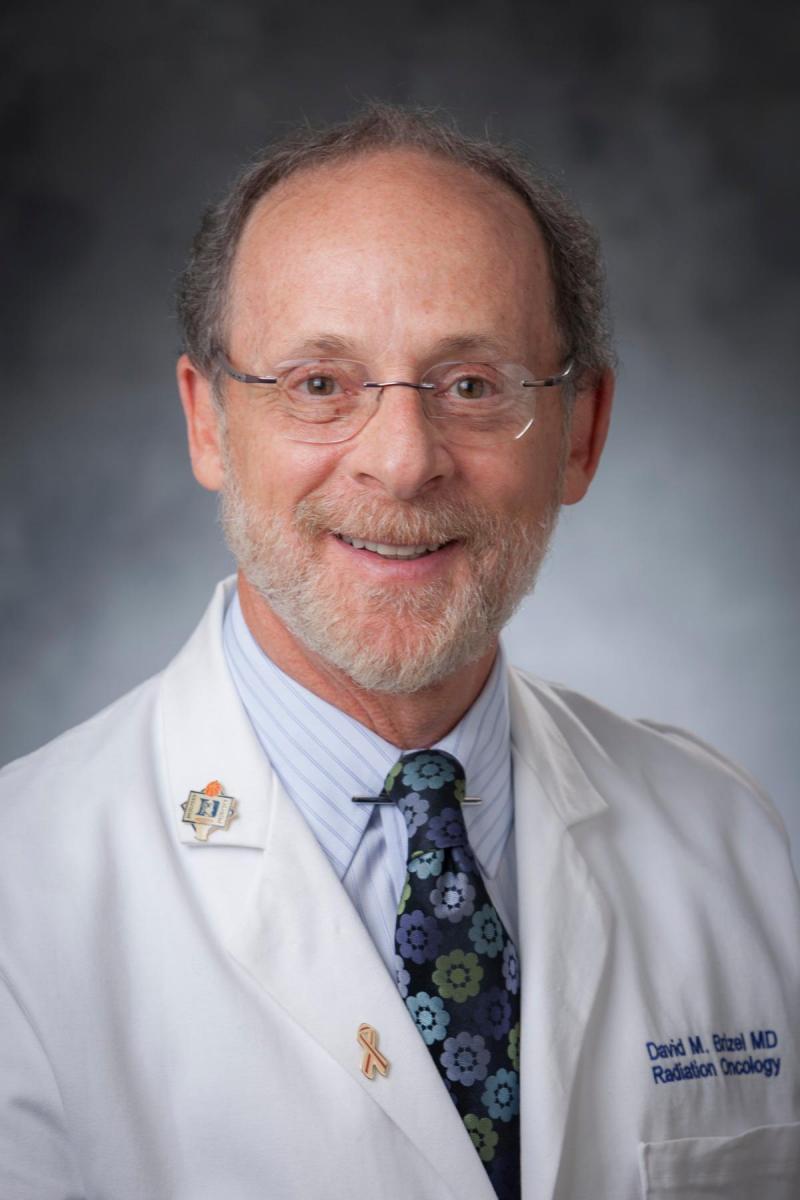 David Brizel, MD, co-director of the Duke Cancer Institute Head and Neck Cancer ProgramWhile the HPV-associated oropharynx cancer that Russell survived remains a relatively rare cancer in the United States, it’s now constitutes the most common type of head and neck cancer and the number of cases is rising, some say to epidemic proportions.

As many as 80 percent of oropharynx cancer cases, like Russell’s, are caused by HPV, the most common sexually transmitted infection in the country. Actor Michael Douglas made headlines when he announced in 2013 that he had treated for HPV-associated oropharynx cancer in 2010.

Most HPV-associated oropharynx cancer patients that Brizel and his colleagues see at Duke are relatively young and male; in their 40s to mid 50s, with some in their late 30s. More males than females, by a ratio of four to one, get this cancer according to the Centers for Disease Control and Prevention, which estimated that about 13,200 new cases are diagnosed in men and 3,200 in women each year nationwide. Importantly, this disease is not associated with smoking.

It takes many years for an HPV infection to result in cancer, if it does at all, explained Brizel, who co-directs the Duke Cancer Head & Neck Cancer Program.

“The changes happen at a cellular level and you go from pre-cancer to a cancerous condition,” said Brizel. “The overwhelming majority of people who get infected with HPV clear it from their immune system. A small proportion of people don’t, and they are the ones who go on to develop the disease.”

Brizel said there’s some data suggesting that the reason more men than women get HPV-associated oropharynx cancer is because not all men mount as vigorous of an immune response as women, though nobody really knows why that is.

The HPV-associated oropharynx patients Brizel sees are too old to have had access to any of the new HPV vaccines, the first of which hit the market in 2006. While the vaccination is indicated up to age 26, the American Cancer Society currently recommends routine HPV vaccination for females and males starting at age 11 or 12 years — before they are sexually active — to protect against HPV infections that can could eventually lead to several cancers and pre-cancers. In addition to oropharynx cancer, various strains of HPV can cause cancers of the cervix, vagina, vulva, and anus, and the vaccine effectively protects against these diseases too.

The vaccine can be “nearly 100 percent effective” against HPV-associated oropharynx cancer, Brizel said, if given before teens are sexually active.

Standard-of-care treatment for oropharynx cancer, meanwhile, is still evolving, said Brizel. Depending on the stage and extent of the disease, patients may be treated with radiotherapy and chemotherapy, like Russell was, but some may be well-treated with radiation alone, and some may be treated adequately with surgery alone or surgery and radiation without chemotherapy.

Oropharynx cancer that’s associated with HPV usually has a very favorable prognosis, more so than many other types of head and neck cancers and other cancers in general, said Brizel, with tumors less likely to recur than those not linked to HPV infection.

“Because the prognosis is very good and conventional therapies are extraordinarily effective, recent efforts have been focused on trying to figure out how to reduce the intensity of therapy so that we can reduce negative side effects of treatment — which is what Robert Russell had — without compromising the effectiveness of the cancer treatment,” said Brizel.

For example, Brizel and his team are now looking at the use of PET scanning during treatment to see if they can identify patients that don’t need as much radiation or chemotherapy. And they’re currently conducting a trial with a radiation protective drug that was developed at Duke to reduce some of the side effects of treatment. 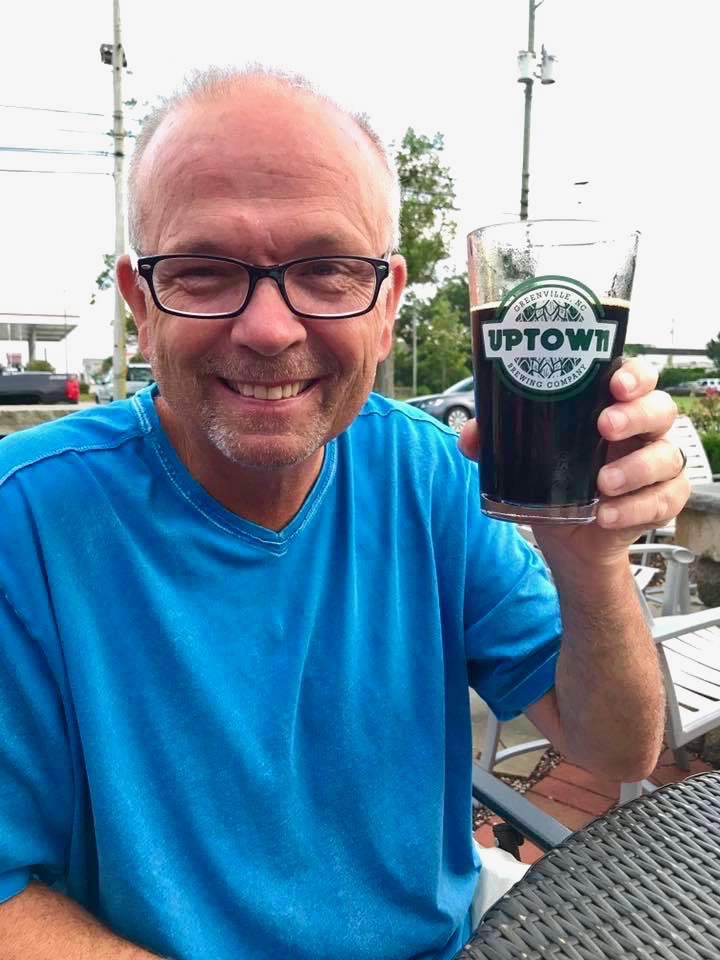 Robert Russell celebrates being cancer-free. Russell is grateful to his doctors, his wife Kristi and family, and Pastor Tim from his church (Glad Tidings) for helping him through his cancer battle.Russell has been cancer-free for three years. He’s gained all his weight back, and eats pretty normally now, though he has to drink a lot of water. He has lingering tinnitus in his ear, a side-effect of his chemotherapy. He continues to enjoy a good game of golf and walks on the beach. He also said that with his physical appearance slightly altered by the disease he’s “not as confident as he used to be.”

The good news, he said, is that his care team has told him he can be “cautiously optimistic” about his prognosis.

“All my doctors were just amazing,” he said, adding that he also appreciated the hugs he got from the lady at the check-in counter, the gospel songs sung by the parking garage attendant, the church volunteers at Caring House who served him “the best meal of his life” (mashed potatoes), and of course, those ninth floor nurses.

“I actually enjoy going back to Duke, since I found out I was ok,” said Russell, who returns for follow-ups every six months. “And I like talking about my experience now because I know I’m lucky to be here and I want people to know.”

Circle photo (top): Tonsil cancer survivor Robert Russell with the nurses of the ninth floor of Duke Medical Center, whom he regularly visits and thanks for his care.