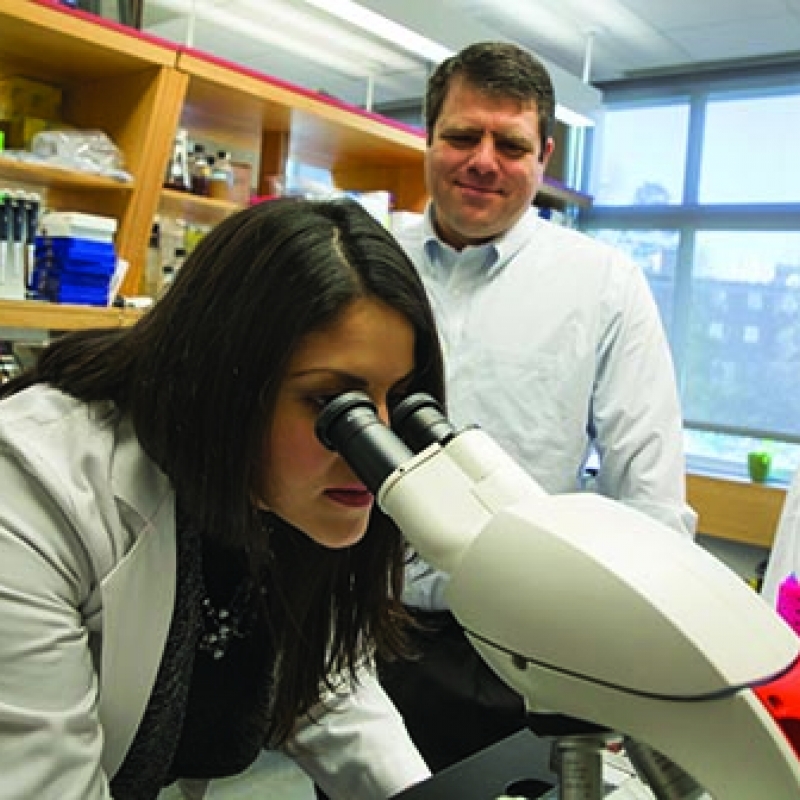 Surgery is a crucial weapon against cancer. But cancer can evade it. A surgeon may think all the tumor has been removed, only to find out from pathology reports that some was left behind. That can mean a second surgery for the patient. Or, if microscopic cancer cells aren’t found by pathologists, they could seed new tumors.

What if surgeons had a tool that could tell them immediately, in the operating room, whether they had removed all the cancer or not?

Duke is helping to develop such a tool, and the results of its first tests in humans made national news. Collaborating with scientists at the Massachusetts Institute of Technology (MIT) and Lumicell Inc., researchers and doctors at Duke developed an agent that causes cancer cells to glow when viewed w it h a handheld imaging device. Lumicell is a company started by researchers at MIT and involving David Kirsch, MD, PhD, a professor of radiation oncology and pharmacology and cancer biology at Duke. The results of tests of the imaging agent in 15 people with breast cancer and sarcoma were published in the journal Science Translational Medicine and were featured in Time, on CBS News, and many other national media outlets.

The study showed that the new agent, LUM015, was safe when injected into human cancer patients and did help distinguish between tumors and normal tissue. The technology could significantly improve treatment for patients with sarcoma, breast cancer, and possibly other types of cancer, says Brian Brigman, MD, PhD, chief of orthopedic surgery at Duke. LUM015 is being tested further in a clinical study in breast cancer patients at Massachusetts General Hospital.

Brigman aims to take the next step to develop LUM015 in sarcoma patients as well. But with the federal grant-funding environment extremely tight, paying for the study is a challenge.

Brigman has planned a multicenter clinical trial for sarcoma patients to take place at Duke, Memorial Sloan Kettering Cancer Center, Massachusetts General Hospital, and MD Anderson Cancer Center. “This study has the potential to fundamentally change how we treat patients with sarcoma,” Brigman says. “If the data in humans looks as good as the data in mice, for example, we may be able to perform more precise operations on patients, use less radiation, and improve local recurrence and survival in our patients.”

Brigman sought a federal grant to pursue the multi-center sarcoma study. His proposal for funding was highly ranked—in the 12th percentile, which means it was ranked higher than 88 percent of the proposals received by the agency in that funding round. But it just missed the cutoff to be funded—only proposals in the 11th percentile or above received grants.

He’s now seeking the funds needed for the trial from other agencies and from philanthropy. “Clinical trials are notoriously expensive, especially when you’re talking about multicenter studies,” Brigman says. The planned study in sarcoma patients would cost about $2.5 million over five years.