#MDCS: A Champion For the Underserved 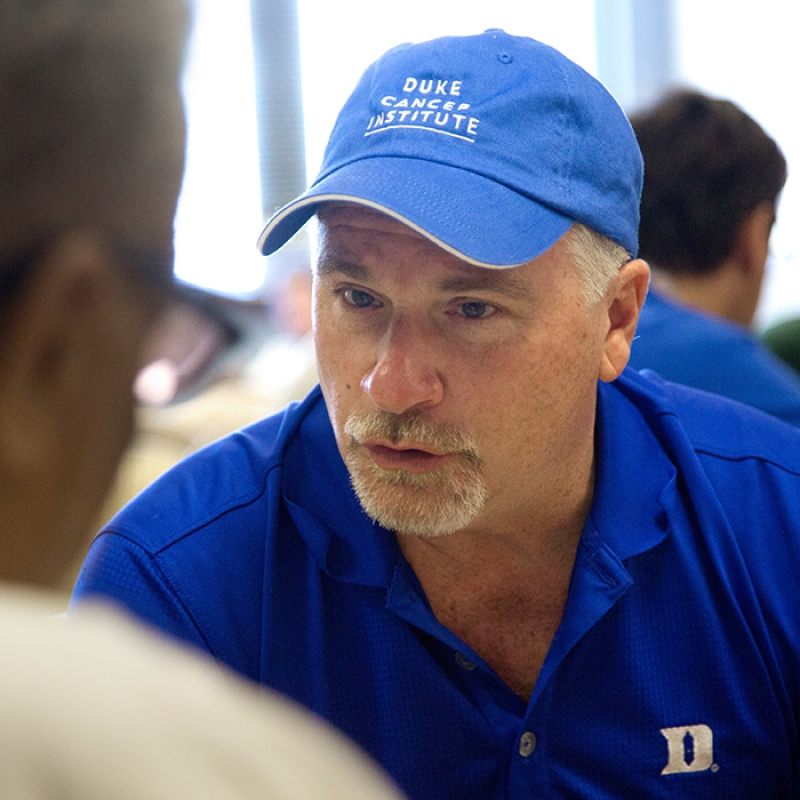 As a boy growing up in Schenectady, New York, Steven Patierno, PhD, could often be found out in the woods performing surgery on frogs, when he wasn’t playing sandlot soccer or a local, slightly more “aggressive” version of capture the flag.

“I always knew I wanted to be a scientist, even before I knew what a scientist was,” shared the deputy director of Duke Cancer Institute.

As a teen, he was into marine biology and gradually took up scuba diving — even volunteering with the Woodshole Oceanographic Institute following whales transiting Nantucket Sound.

Once he entered college in the mid 1970s, his scientific interests shifted.

“I became fascinated by how drugs worked in the brain, the science of neuropharmacology,” said Patierno, who received his Bachelor of Science degree in Pharmacy at the University of Connecticut in Storrs, Connecticut.

His first-generation Italian parents expected that after their son — the first in his family to go to college — earned his degree, he’d come home and work in a pharmacy like his clean-cut, tie-wearing classmates.

“They thought I’d be the guy in the short white coat behind the counter at CVS,” laughed Patierno. But the self-described “misfit” at pharmacy school, “a rebellious longhair with an earring” whose side hustle was playing keyboard and guitar in a band, “never had any desire to be a pharmacist.” The pharmacy-oriented faculty of the school were also “concerned” – until the Dean introduced him to the research faculty.  “It opened up another world,” he shared.

Patierno felt most at home in the lab where more people looked like him and thought like him; “curious and interesting people,” he said, “who were interested in making discoveries and moving science forward, not just owning a drugstore.”

After graduation and some time off to think about what was next, he would leave the northeast for the University of Texas Health Science Center in Houston to pursue his PhD in neuro-pharmacology. 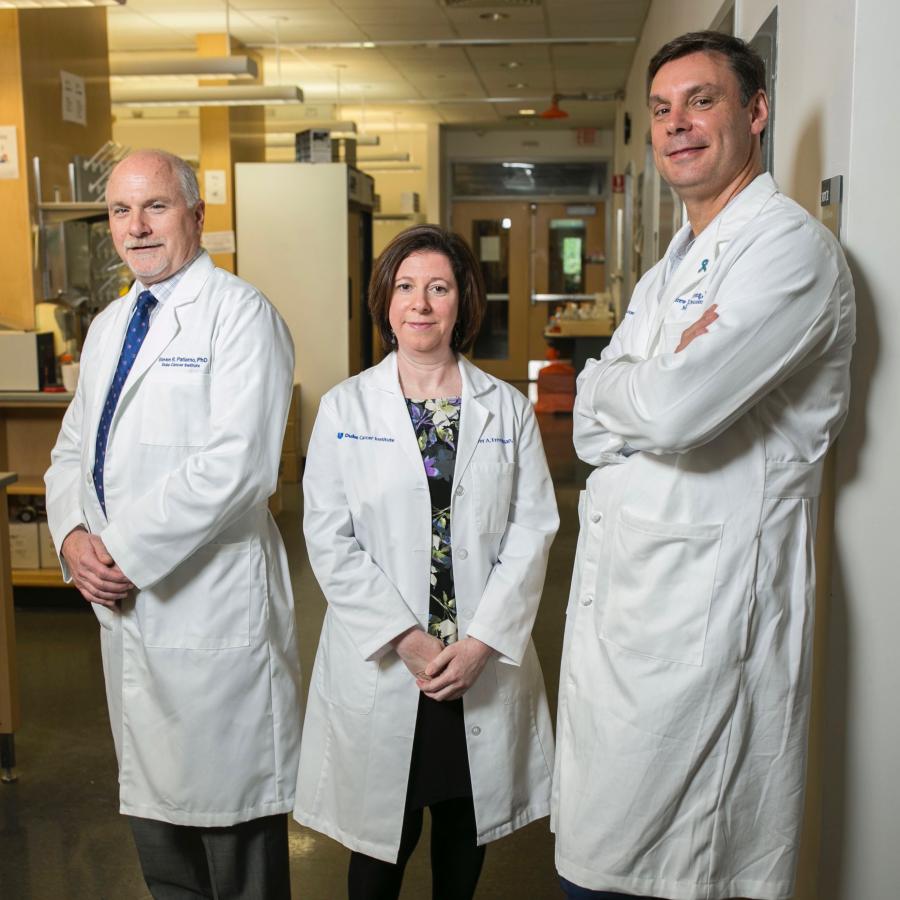 The Duke Cancer Institute's Patierno/George/Freedman lab is led by Steven Patierno, PhD, Jennifer Freedman, PhD, and Daniel George, MD.Patierno, at 24 years old, was at the end of his first year at the Graduate School of Biomedical Science, when he decided to attend a highly advertised seminar across the street at Baylor University.

He remembers the transformative moment as if it were yesterday. It was 1982.

“I went over to this massive lecture hall and up in the front were what we used to call the “starched white coats” with their suits and ties and grey hair all coiffed — the senior physicians and scientists who ran the place,” recalled Patierno, drawing a contrast with his chosen “uniform” of the day — torn jeans, clogs, and a Grateful Dead shirt.

He continued: “They were raving about this new technology that was going to transform the world. Finally they called Richard Palmiter to the stage. He’s got a gray ponytail down to the center of his rear end and he’s wearing jeans and a rock-n-roll t-shirt, like me. I still remember it to this day. He gets up and ambles over to the microphone and delivers this mind-blowing lecture.  By the end, I looked at him and decided then and there, That’s what I want to do.”

After chatting with Palmiter after the lecture, he walked straight to the department chair’s office and requested to change his focus from to neuro to cancer pharmacology. 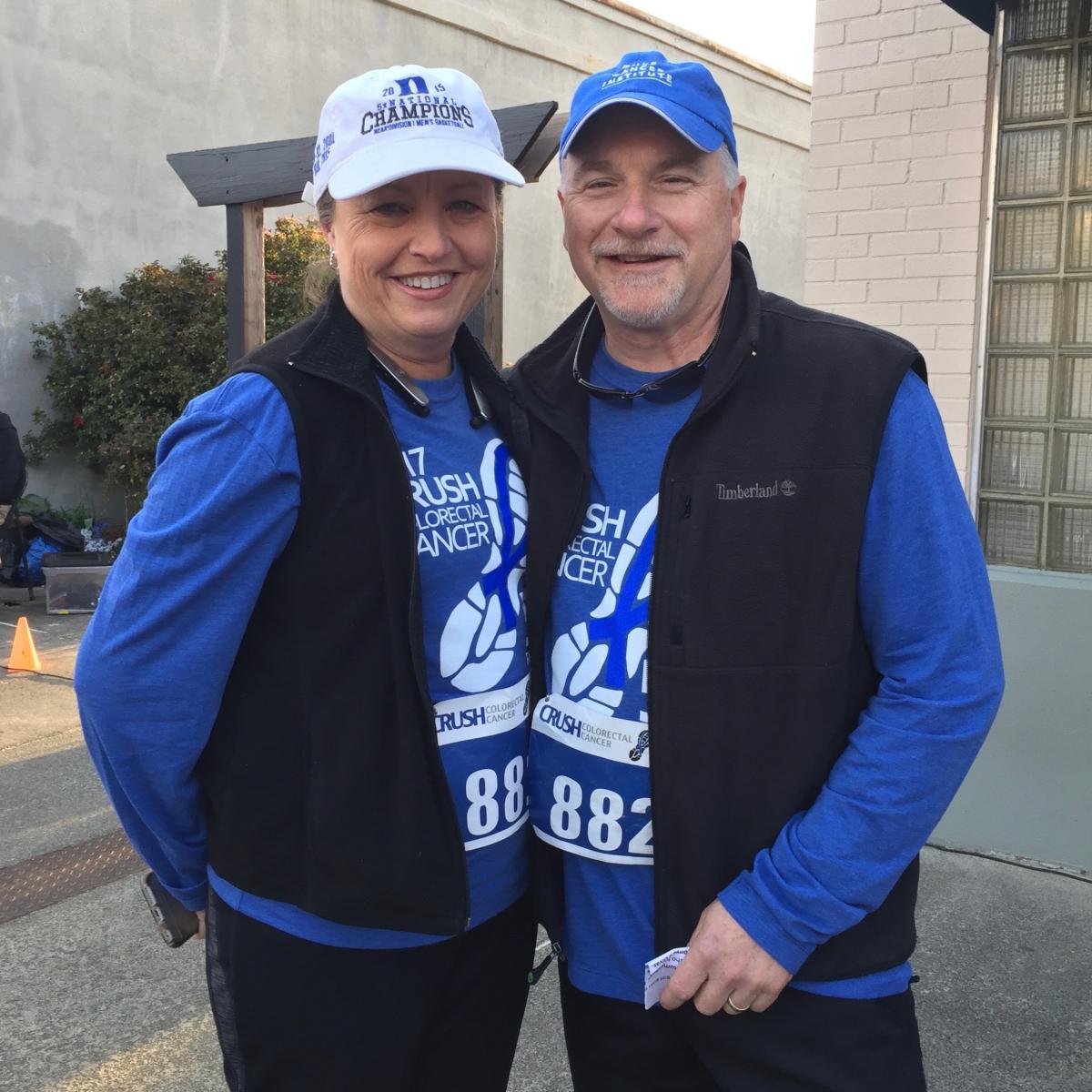 Steven Patierno, PhD, and his wife Kim are pictured here at DCI's 2017 CRUSH Colorectal Cancer 5K event. They first met in Houston when she was a cardiology nurse at Houston Methodist Hospital and he was a PhD student next door at University of Texas Health Science Center.Three years later he defended his thesis on chemical carcinogenesis and DNA damage, married his girlfriend (a Texas-born cardiology nurse) and left Texas for an NIH-funded postdoctoral fellowship in molecular oncology and carcinogenesis at the University of Southern California (USC) Norris Comprehensive Cancer Center.

Two-and-a-half years in, and itching to run his own lab, he accepted a faculty position with the Department of Pharmacology at George Washington University (GWU) in Washington, D.C. They were looking to hire a molecular biologist who could clone genes and study gene regulation.

“Back then there just weren’t many of us who knew how do this kind of work," he said.

In his carcinogenesis lab at GWU, Patierno initially focused on DNA damage and lung cancer; investigating metals, like chromium and nickel. (His lab did some of the seminal work of uncovering the mechanism of carcinogenesis of hexavalent chromium, the cancer-causing chemical that was a focal point of the 2000 film Erin Brockovich)

But he also wanted to work on disease-oriented drug discovery, specifically in the context of breast cancer and prostate cancer, so he soon added a cancer biology division to his lab, and grants began to role in. At one point he had nine post-doctoral fellows, seven grad students and “an army” of technicians.

In 1995, Patierno was tapped to become head of GWU’s Cancer Research Center, and in 2002, was offered the job of founding executive director of the new GW Cancer Center. 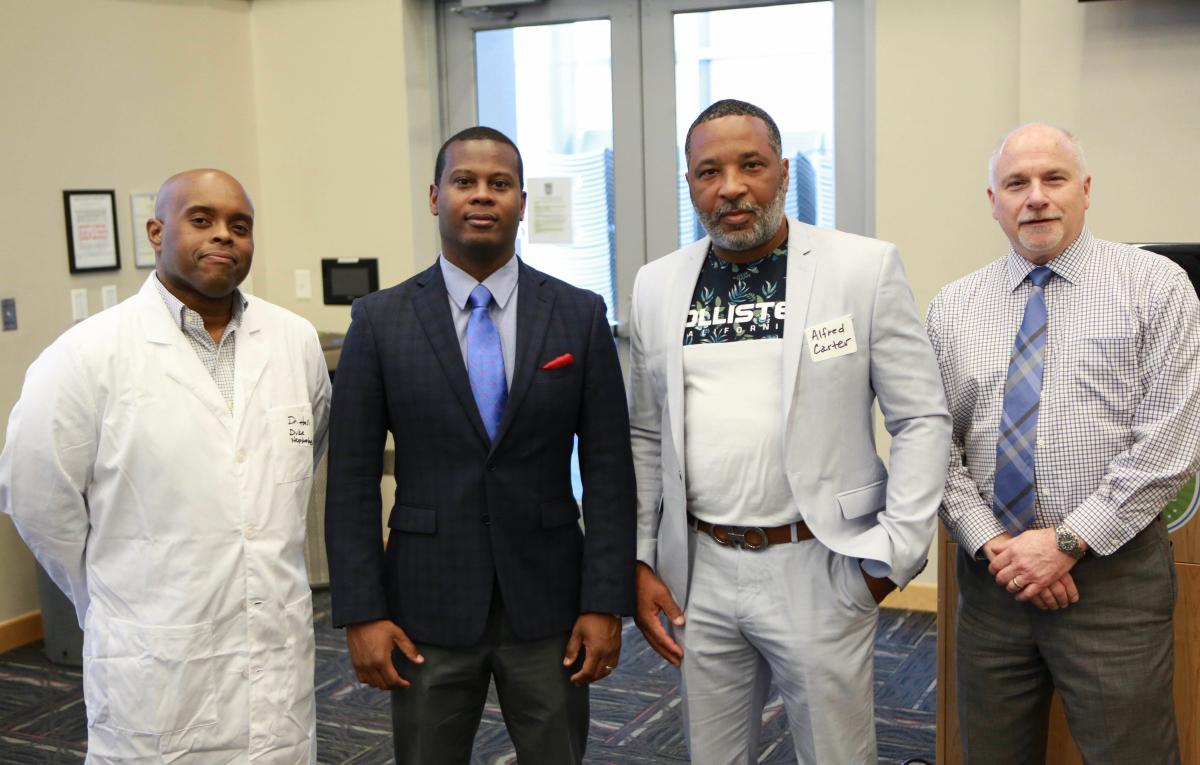 Half the patients walking through the GW Cancer Center doors were from the impoverished quadrants of the city, where there were very few available health services.

“Like most cancer centers, we were functioning as an ivory tower, expecting the patients to come to us and not really engaging with them in their communities,” he said.

To his surprise, he got the job with the “startup package” for his vision, which included deploying a mammography van, conducting prostate cancer screenings in the community, conducting a neighborhood-by-neighborhood cancer education campaign, encouraging more minorities to participate in clinical trials, and eventually collaborating with the DC city government to turn an NCI-funded patient navigation research program (which connected patients with five major area cancer centers and multiple clinics and advocacy organizations) into a giant cancer safety net for the underserved.

Meanwhile, Patierno’s lab had begun to uncover evidence that even after removing the social and structural determinants that contribute to cancer disparities, there was still a mortality difference between African Americans and Caucasians, particularly as it relates to prostate and breast cancer.

With supplemental funding from the NCI, he and his collaborator Norman Lee, PhD, began looking into the biological underpinnings — the genomics of cancer disparities — to back up their theory. The early results were intriguing enough for Patierno to turn over his carcinogenesis grants to young faculty he had mentored; steering his entire lab into studying the biology of cancer disparities. 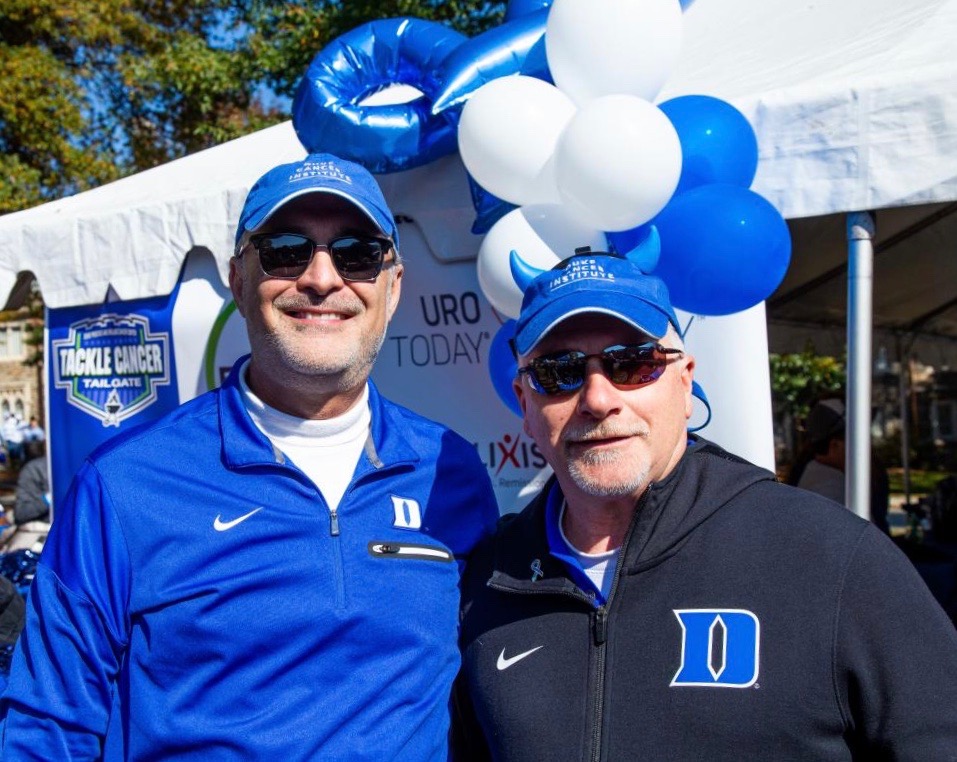 Patierno said he was drawn to Duke Cancer Institute because of its “powerhouse research,” “the chance to mold and shape a new cancer institute, from the ground up,” and the opportunity to work closely with Michael Kastan, MD, PhD, a molecular biologist and director of St. Jude Children's Research Hospital Cancer Center, a professional colleague who was simultaneously being recruited to Duke.

Once at DCI, Kastan and Patierno launched, with Nadine Barrett, PhD, as founding director, the Office of Health Equity (OHE), whose mission it is to reduce cancer disparities and improve population health in the region for African American (25 percent of Duke’s cancer patient population), LatinX, Asian, Native American, Jewish, Muslim, LGBTQ, and rural communities.

At the end of 2018, they launched DCI’s Just Ask Minority Accrual Pilot Program, six years in the making, that aims to boost minority participation in cancer research by engaging the local community about the benefits of clinical trials. In January 2019, the V Foundation gave the program a $71,000 boost.

“The marked lack of diversity in clinical research across the nation is one of the largest challenges that researchers face,” said Patierno.

Patierno’s lab at Duke — the nine-person Patierno/George/Freedman Lab — focuses on what he calls the “omics” of cancer disparities, including genomics (DNA), transcriptomics (gene expression at the RNA level), proteomics (gene expression at the protein level), metabolomics (metabolic pathways), and epigenomics (modifications in the genetics of a cell).

Having started with prostate cancer, the lab’s disparities research has since expanded into breast, lung and liver cancer and attracts millions in research funding, including a recent major Challenge Award from the Prostate Cancer Foundation to translate their lab discoveries into clinical trials.

Patierno is also passionate about training URM (under-represented minority) graduate students and postdoctoral fellows, at Duke and with the local Historically Black University, North Carolina Central University. Last year Patierno was honored with an Equity, Diversity and Inclusion (EDI) Award from the Duke Office for Institutional Equity as well as the Duke University and Health System 2018 Diversity Award.

“Dr. Patierno is an internationally recognized expert in cancer control and his research laboratory has enjoyed uninterrupted funding from the NIH for more than 25 years,” wrote Kastan at the time. “His work has had, and continues to have, a far-reaching impact on cancer health disparities.”

Patierno has also taken other initiatives close to his heart and run with them — including laying the groundwork for DCI’s Supportive Care & Survivorship Center and the Center for Onco-Primary Care, both led by Kevin Oeffinger, MD, and founding a cardio-oncology working group.

At age 60, Patierno is still energized by the work and inspired by the patients he serves. His Duke Cancer story — the culmination of a life’s work in the field — is far from finished.