#MDCS: Melanoma Survivor Thanks Her Dragonslayer 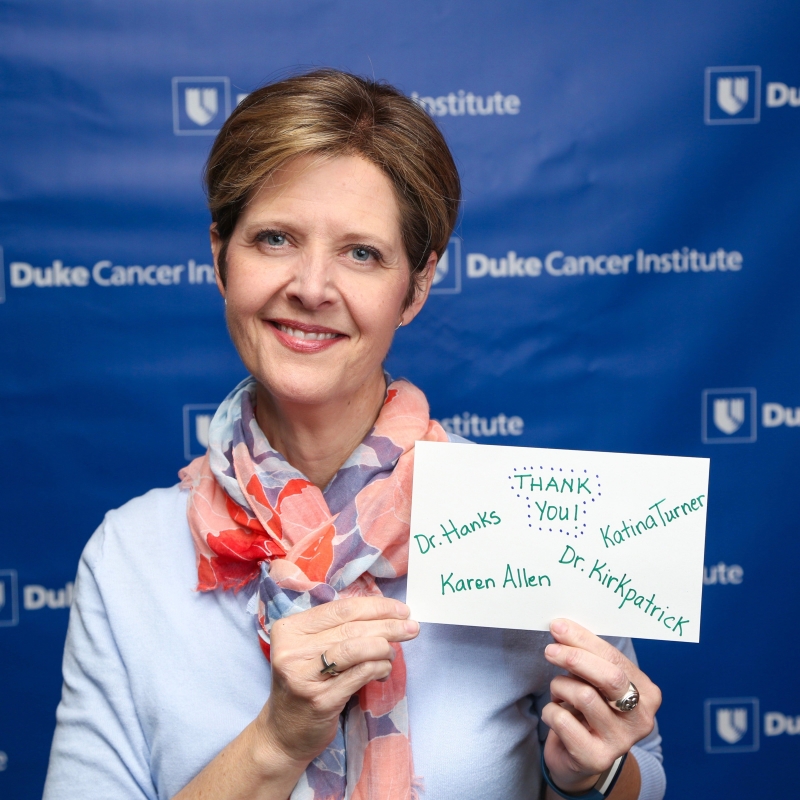 One spring day five years ago, fourth grade teacher Tricia Gallagher felt something like a scab — smaller than a sunflower seed — on her head. She didn’t think much of it.

“I thought it was a tick, because my boys and I hike,” said the energetic mother of two active teenagers, “but I had my doctor biopsy it just in case.”

Much to her shock, it was melanoma. Gallagher, then 43, had one surgery to remove it then another surgery to take out 35 lymph nodes behind her ears. Six months later, a new spot — close to the old one but deep into her skull — emerged. Another surgery, then six weeks of radiation, followed, during which she lost her naturally curly blonde hair. The spot remained.

“At this point my doctors in Winston-Salem said, ‘We’ve done everything, we can’t help you anymore, so we’re sending you to Duke’,” recalled Gallagher, who secured an appointment after a couple weeks. “And that’s when I met Dr. Hanks, my dragon slayer.”

While more spots had developed in the interim behind her right ear and on her neck, Duke Cancer Institute’s melanoma team had a plan; an aggressive immunotherapy treatment called Interleukin-2 that because of its toxicity would require a hospital stay. She took the chance.

Gallagher endured two grueling rounds of treatment; one over summer break 2014 and one in October 2014.

The spot on her neck and behind her ear disappeared after the first round, but then spread to her lower back, left thigh, and lung. So, she went for the second round — treatment for a week, resting for a week, then back to teaching fourth grade.

“The side-effects are like the worst flu you ever had, fever, chills, everything hurts,” said Gallagher, who despite this, managed to keep her spirits up for her sons. “I wanted them to see that I was OK; see me cracking jokes and asking for Chick-Fil-A.” 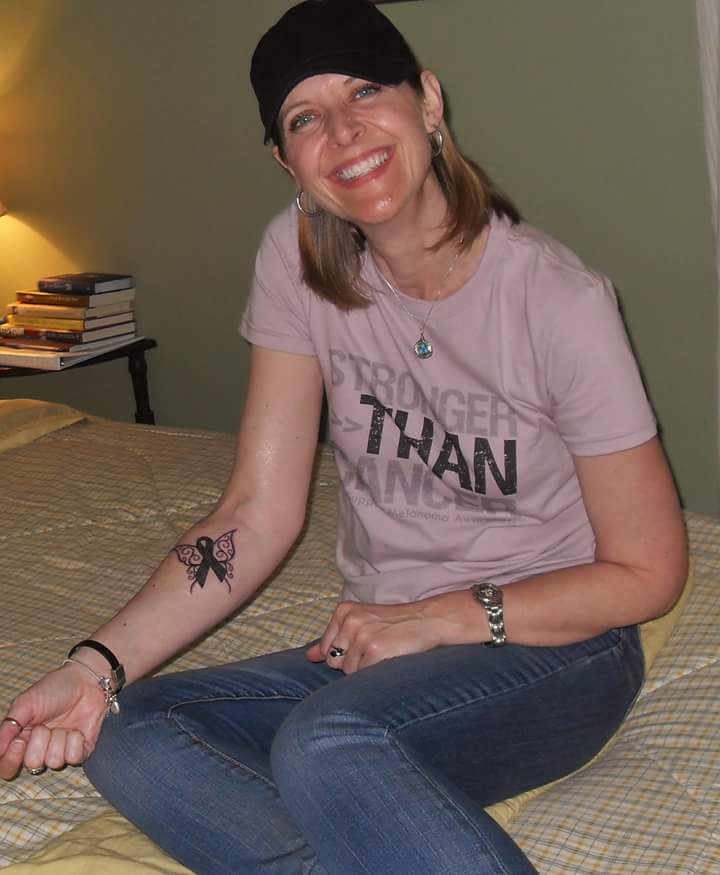 In May 2014, on Gallagher’s one-year anniversary of being diagnosed with melanoma, she got a butterfly with a black ribbon tattooed on her arm — black “because it’s the color for melanoma awareness” and a butterfly because it "stands for hope.”Some relief came in late 2014 when a PET scan revealed that the tumors on her head, lower back and left thigh were gone. The lung tumor, though shrinking, was still present.

At New Years, Gallagher, her sons and her best friend ran a 5K. She was feeling good. Then her lung tumors stopped shrinking.

Her oncologist Brent Hanks, MD, PhD, advised a newer immunotherapy, ipilimumab, approved by the Food and Drug Administration (FDA) in 2011. One day, every three weeks, for four months, she would come to Duke for infusions that made her nauseous, but she was happy when the tumor started shrinking again.

At that point, Hanks considered surgery, but after undergoing an MRI in February 2015, nearly two years since diagnosis, she learned the melanoma had spread to her brain.

“When Dr. Hanks called to say that it had moved to my brain I thought this is it, I need to start making final arrangements,” said Gallagher. “I felt like I was chasing my tail. We would have success, then the melanoma would move somewhere.”

She underwent a series of stereotactic radiosurgery procedures for recurring brain tumors, performed by John Kirkpatrick, MD, PhD, then Hanks recommended treatment with a new immunotherapy drug FDA-approved for the treatment of advanced melanoma only in late 2014 — pembrolizumab — an anti-PD-1 immune checkpoint inhibitor.

“Death is no longer a foregone conclusion of stage four melanoma,” said Hanks, whose research lab focuses on identifying the causes of immunotherapy resistance in the tumor micro-environment. “If you respond to treatment, the duration of response is very good.”

Only around 35 to 40 percent of advanced melanoma patients will respond to pembrolizumab immunotherapy, Hanks explained, but for those who do respond, the response is durable — lasting at least two years in 75 percent of these patients. Those patients who haven’t progressed by around year three after their treatment started are much less likely to relapse in the future, he said.

Tricia, for whom the treatment has worked so far, is hopeful. 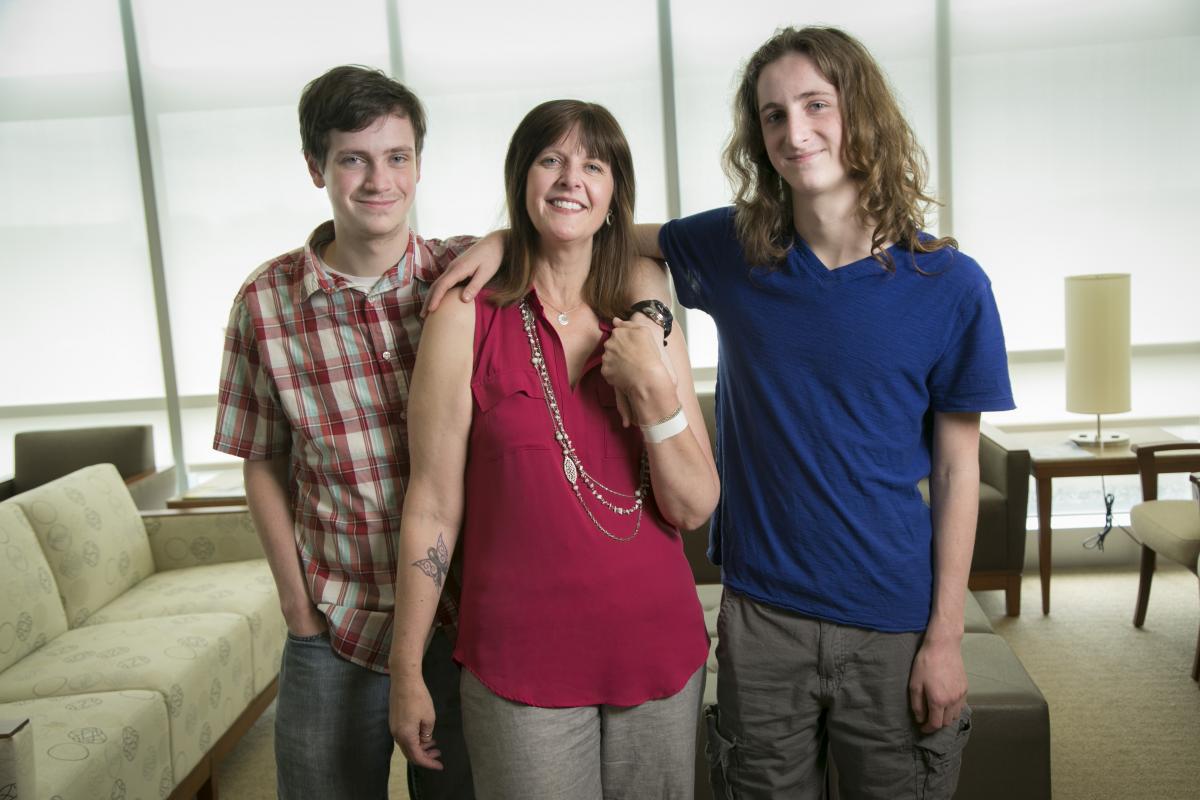 Tricia Gallagher's sons Ian (left) and Patrick (right) — her "cornerstone of support" — often join their mom at her doctor appointments. (photo taken April 14, 2017, by Jared Lazarus)“If I’d have had this journey two to three years before it started, this treatment wouldn’t have been available for me,” Gallagher said, noting that as of March 27, 2018, there’s been no evidence of cancer in her brain for two-and-a-half years and none in her body since her scans first came back clear on Good Friday, 2016. From now on, she’ll need brain scans only once a year.

Gallagher gets pembrolizumab infusions every three weeks, with no detectable side effects, and sees Hanks every six. They’ve discussed ending the pembrolizumab sometime in the near future, but haven’t decided on a specific date.

“I joke with the phenomenal nurses in the infusion suite that my pembro infusions are kind of like Linus’s blanket,” she said.

Gallagher said that when she first learned that the cancer had spread to her brain three years ago, she couldn’t have imagined that she’d be thriving the way she is now.

“At that point I could not really see past what needed to immediately be done, fight,” she said. “Am I thriving now? Most definitely!!”

When Gallagher’s not teaching fourth grade — she’s been an elementary school teacher for 26 years — she enjoys spending time with her boys, working in the yard, reading and antique shopping.

Her sons Patrick, now 17, and Ian, now 19, are her “cornerstone of support.” Last spring she watched Ian graduate high school. Patrick will graduate this June. The trio recently returned from a fun Spring Break in her home state of Louisiana.

Five years on from her initial diagnosis, Gallagher finds her outlook on life has changed.

“I'm thankful to just be here, to wake up every day, whether to enjoy the good stuff, or face the challenges,” she said. “I'm thankful for time to spend with family and friends, to go to a job I love, to sit and relax, or to get moving and do some work around the house. I'm so thankful God placed the doctors and treatments in my path that have helped to change my life, to save my life. Every day is a gift.”