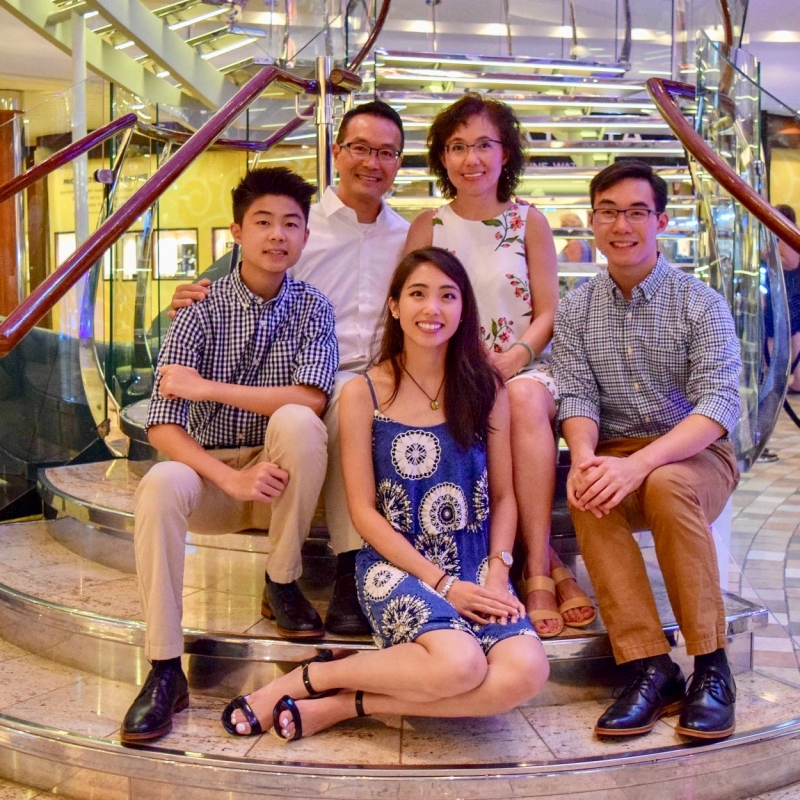 There wasn’t much that could slow down Keith Nguyen, a Merck pharmaceutical employee who often traveled for business and described himself as being “in perfect health.” But when he had a heart attack last year, at age 50, it was if life had dealt him a sucker punch. When several months later he learned he had lung cancer, he was sent reeling – nearly sending him down for the count.

“Two to three years before my heart attack, I’d gotten on this health kick; I was going to the gym three times a week and cut sodas, sweets and fried foods from my diet,” said the father-of-three whose “health kick” was a response to an earlier diagnosis of diverticulitis (an infection in the digestive tract).

Nguyen had low blood pressure, cholesterol counts well within range, and wasn’t overweight. Aside from experimenting in college, he didn’t smoke — a big risk factor for heart disease and the number one risk factor for lung cancer — nor was he ever exposed to second-hand smoke or chemicals.

“My cardiologist said it was ‘kind of fluky’” said Nguyen, a 12-year resident of Wake Forest, North Carolina. “To have a heart attack and then be diagnosed with cancer in the same year was just crazy.”

Following his heart attack in February 2017, he’d had a stent placed to keep his arteries open and was put on several medications. He said he then developed a “weird cough” that carried on for months; first diagnosed as a possible reaction to medication, then as allergies.

That Thanksgiving, Nguyen visited his parents in suburban Philadelphia where he’d grown up after the family emigrated from Vietnam in 1975.

His parents, who hadn’t seen him in six months, observed he’d lost a lot of weight and said he looked ill.

When Nguyen returned from that trip, his cough still nagging him, he requested a chest x-ray. There was a mass the size of a clementine in the lower left lobe of his lung. Fortunately, a lung specialist said his breathing capacity was unaffected.

However, a PET scan showed inflammation of the lymph nodes in his chest that were pressing on his airways — the mostly likely source of his cough. A biopsy confirmed stage 3 lung cancer.

To rule out brain metastasis, Nguyen underwent an MRI.

“The night before the MRI my wife and I prayed, in tears, to God, not to let it go up to my brain, because once it goes up to the brain, then everything goes downhill real fast,” recalled Nguyen, who said his Christian faith has played “a huge part” in his treatment plan.

Unfortunately, two spots were found in his brain and his cancer was re-staged to 4. Soon after Christmas, John Kirkpatrick, MD, PhD, radiation oncologist and co-director of the Duke Center for Brain and Spine Metastasis, removed the tumors via stereotactic radiosurgery (SRS).

“He shot these radiation beams into these two spots, zapped them, then they were gone; easily treated with today’s technology,” said Nguyen.

Meanwhile, Nguyen’s oncologist at Duke, Thomas Stinchcombe, MD, discussed an additional treatment plan — the oral targeted therapy ALK inhibitor drug alectinib (brand name: Alecensa) that had just been FDA-approved, one month before Nguyen’s diagnosis, for the first-line treatment of non-small cell lung cancer (NSCLC). While 85 percent of lung cancer diagnoses are NSCLC, only five percent of those patients test positive for the ALK mutation. Nguyen was one of those few. And, even though the drug cost $15,000 per month, because he was stage 4 his insurance paid for most of it.

Keith Nguyen, his wife Cathy, their daughter Amanda, and sons Alex and Adam (at left) are pictured at a wedding in 2016, before his heart attack and cancer diagnosis that threw the family for a loop. In August 2018 (at right), the family enjoyed the sunshine of the Caribbean together in celebration of Keith and Cathy's 25th wedding anniversary. “I chose to share these before and after photos because I wanted to show that with the current meds, no one could tell I’m living with stage 4 lung cancer,” said Nguyen.

After a month, the lymph nodes in his chest returned to their normal size and he stopped coughing. The mass in his lung has since shrunken down to less than a quarter of the size it was before. His heart is also doing well.

“Right now, it seems everything is in check, with little side effects,” said Nguyen, who said follow-up scans of his brain have remained clear. “In the past, as soon as you would hear cancer, you’d think it’s hopeless. I’m fortunate that we’re at a turning point as far as treatments are concerned. The people that work with me every day would have no clue that I am a stage 4 lung cancer patient.”

While Nguyen had been “shocked” by the lung cancer diagnosis, he noted that a scan five years ago taken when he had diverticulitis had also revealed a small two-centimeter mass in his lung. Because it was so small, however, he’d been advised by his family doctor to follow-up in six months. There was no follow-up and the mass had grown.

“It was partially my fault,” said Nguyen. “I cancelled the appointment due to travel. That one cancellation then pushed it off the table and was forgotten.”

Living out his faith, Nguyen isn’t angry about how things turned out.

“I believe that God allowed the cancer to grow to a certain point, to my brain, for a reason,” said Nguyen. “If I hadn’t been stage 4, then I wouldn’t have been eligible for this medication that’s been so effective. For me, knowing that God was in control and that he loves me, I’m not afraid to die.”

Nguyen has been back to work full time since April 2018. He took only three months off for disability. And he’s also back to working out at the gym three times a week. He’ll have to take alectinib for life, or until his body develops a resistance to it and is no longer effective, which he’s been warned could happen.

Nguyen has learned to slow down and is even considering an earlier retirement, at 57, if he can afford it. With two kids in college and a third in high school, he admits that will be a challenge.

He did take the time to enjoy an early 25th anniversary cruise with his wife and kids this summer; seven days in the Bahamas, St. Martin, and St. Thomas.

“From the end of Thanksgiving last year until the end of January, we went all the way down one of the deepest drops of a rollercoaster, and then all the way up again,” he said. “I’ve learned that life is precious; time is precious.”

CIRCLE PHOTO (TOP): Keith Nguyen, his wife Cathy, their daughter Amanda, and sons Alex and Adam posed for a cruise ship photo this past August (2018) on a vacation to the Bahamas, St. Martin, and St. Thomas. They were celebrating Keith and Cathy's 25th anniversary. "Cathy has been a trooper through all this,” said Nguyen. “I’m the one who has cancer, but I think she’s the one who suffers more than me.”