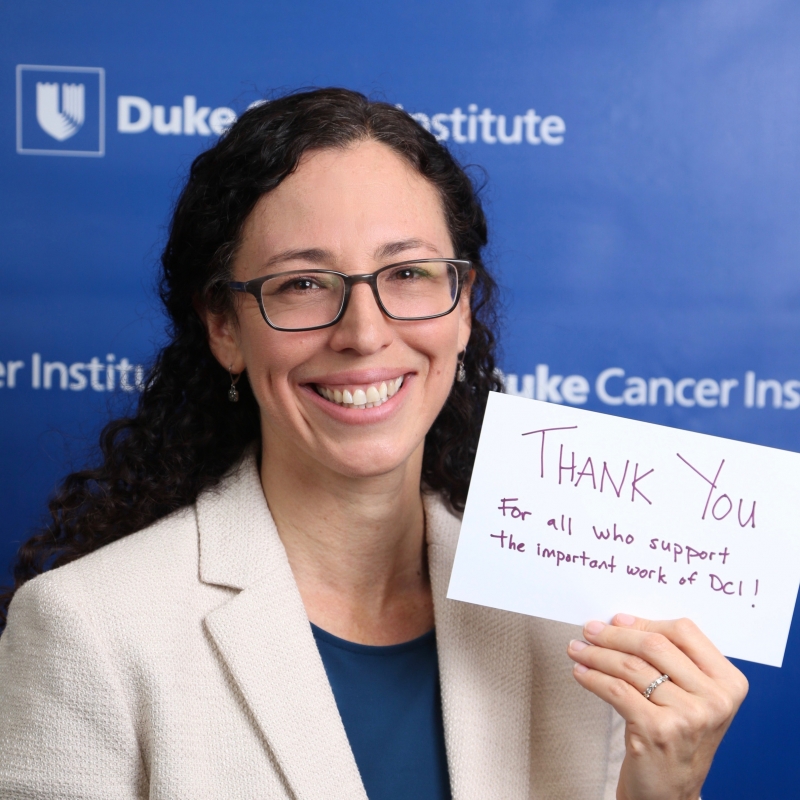 Meira Epplein, PhD, MS, MA, can hardly recall a time when she wasn’t thinking about what she now considers her “life’s work” — researching Helicobacter pylori, the primary identified cause of stomach cancer. The path to getting there, she says, “was a bit unusual.”

A co-leader for Duke Cancer Institute’s Cancer Control and Population Sciences (CCPS) Research Program for the past nine months, Epplein recounts how she came into cancer research “through the back door.”

After earning a bachelor’s degree in East Asian Studies from the University of North Carolina at Chapel Hill and a master’s degree in international studies/Chinese studies from the University of Washington, Epplein went on to work at a think-tank where her focus was political, military, security, and legal issues, including intellectual property rights.

Frequent business trips to China as a program officer for the Seattle-based National Bureau of Asian Research were spent organizing high-level meetings. But when her big-city work was done, Epplein, who was fluent in Chinese, began adding on personal travel days to explore the rural northern and southwestern parts of China.

“I noticed how sanitation was very poor in the countryside and it was so clear to me that the health of people there was suffering,” said Epplein. “Here I was helping the bureaucrats and lawyers, when what I really cared about was doing something to help improve people’s health. I felt like I didn’t get to make a difference. I wanted to be more hands on.”

So, when she saw, in 2001, that Fred Hutchison Cancer Research Center at the University of Washington was looking for a program manager to oversee a study on female textile factory workers and breast cancer, she applied.

“I didn’t even get interviewed,” said Epplein. “I got nothing.”

The project’s principal investigator, David Thomas, MD, PhD, told her that with no masters-of-public- health (MPH) and no background in science or medicine, she never had a chance. He advised her to go back to school for an MD, PhD.

Not quite ready for that path, she instead applied for and got a job at Fred Hutch as an administrative coordinator for a senior epidemiologist and opted to pursue the Masters in Health Administration (MHA) program, focusing on international health policy.

While a masters student, Epplein served as a graduate research assistant for mentor John Potter, MD, PhD, and helped him organize an international symposium on Helicobacter pylori (H. pylori), a bacterium that infects approximately 50 percent of the world’s population, and, notably, an estimated 80 percent the adult population of East Asia, China, Japan, and Korea.

She was hooked —both by the bacterium and by the field of epidemiology. And, she didn’t have to give up travel to Asia. Later in 2004, moving to a position at Fred Hutch as an international research project manager, she pursued an epidemiology PhD.

“Epidemiology is a field where scientists generally use large data to assess and explore risk factors for disease,” explained Epplein, who’s had a knack for math since high school. “We love biostatistics and we get really excited about methods, but we haven’t been so good about translation.”

Now at DCI, Epplein, 43, sees an opportunity for just that — translation — the practical application of 13-plus years spent researching H. pylori as a student at the University of Washington, as a post-doctoral fellow at the University of Hawaii (2007-2009) and as a professor at the Vanderbilt-Ingram Cancer Center in Nashville, Tennessee (2009-2017).

“I love infection, because there’s an intervention point,” said Epplein, pointing out that one in five new cancers is caused by infection. “I’m excited to be at Duke because they’re excited about the possibilities of H. pylori eradication in the United States, starting with the local population. There’s so many deaths we don’t yet know how to prevent, let’s prevent the ones we know we can.”

Epplein’s signature Duke project — the Durham Initiative for Stomach Health (DISH) launched in January — seeks to understand the prevalence of H. pylori in the Durham, North Carolina population and the possibility of eradicating it and reducing stomach cancer risk.

Eradication of H. pylori (through antibiotics and a proton pump inhibitor) has been shown, in studies in Asia, to be effective in reducing stomach cancer risk by as much as 50 percent.

Funded in part by DCI, DISH is a CCPS initiative in collaboration with DCI’s Office of Health Equity and Disparities and its Center for Onco-Primary Care, the Department of Population Health Sciences at the Duke University School of Medicine, and community partners. Recruitment for a local population study that screens people for H. pylori will take place later this year.

Epplein’s hoping to develop and grow a stomach cancer prevention program at Duke, with the goal of moving H. pylori screening — done by a breath, blood or stool test — into policy. Eventually, she’d like to help build a center for infection and cancer.

She’s continuing her work on the epidemiology of H. pylori under two large NCI grants to research infection, inflammation, and cancer through: the development of an H. pylori blood biomarker for gastric cancer risk in East Asia; and the investigation of H. pylori protein-specific antibodies and the potential risk of colorectal cancer.

Her busy days are spent meeting with her team and co-leaders, going over datasets and doing statistical analysis, taking calls with collaborators from the U.S. and abroad, writing up her research, reading the current literature, and engaging with local community members.

After nine months on the job, she can say she’s settled in. The Norfolk, Virginia-native noted she has a Duke connection that goes all the way back to junior high. Epplein took summer school classes in cultural anthropology and Japanese through the Duke TIP (Talent Identification) program and credits those classes with informing her career path.

“Coming back to Duke after all these years is a coming home,” she said.