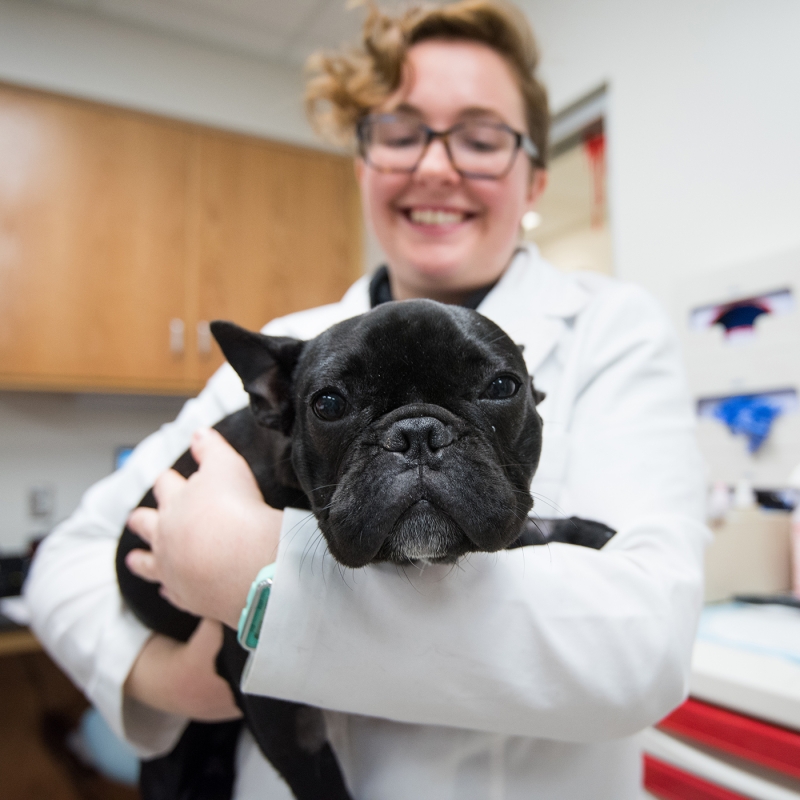 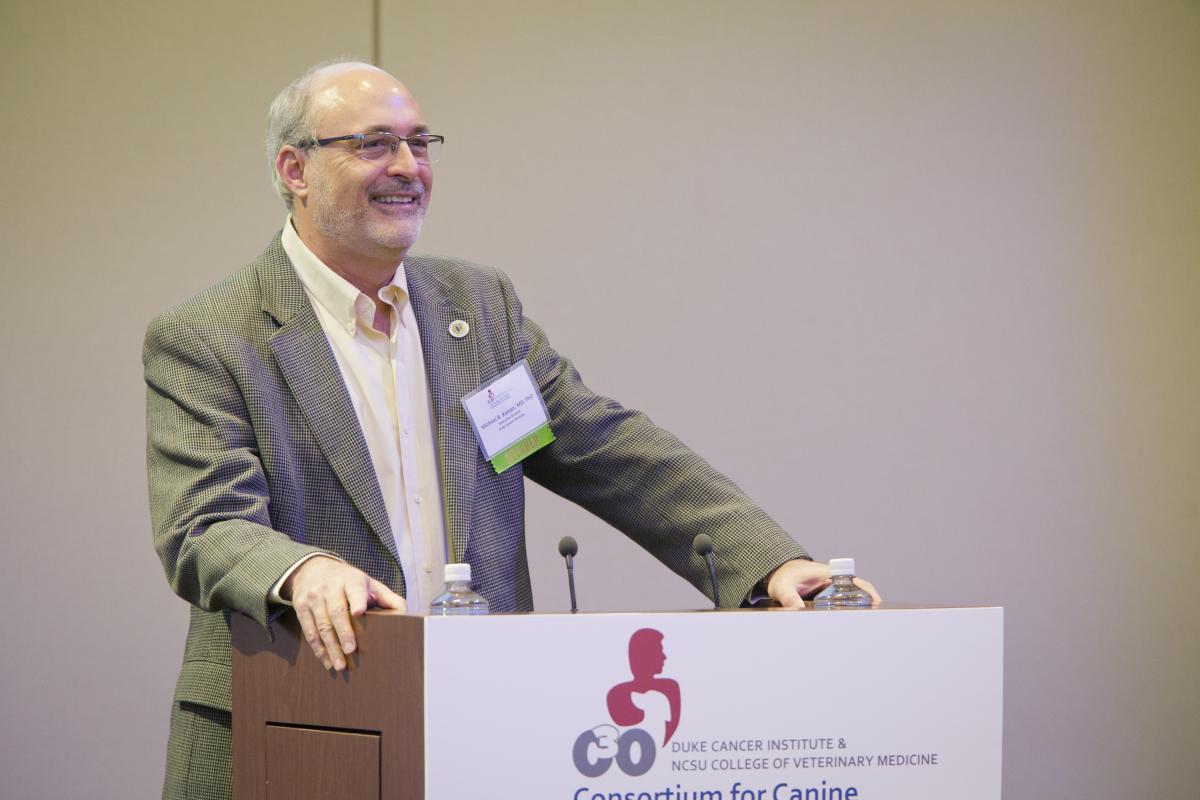 Michael B. Kastan, MD, PhD, executive director of the DCI, greets guests attending the Consortium for Canine Comparative Oncology (C3O) Symposium on March 4 at the SAS Executive Briefing Center Auditorium.When it comes to cancer, man and his best friend are not that different. With similar genomes and shared environmental triggers leading to spontaneous tumors, dogs can throw us a bone or two when it comes to unraveling the mysteries surrounding cancer. To promote the collaborative study of human and canine cancers, Duke Cancer Institute (DCI) and North Carolina State University’s (NCSU) College of Veterinary Medicine have teamed up to establish the Consortium for Canine Comparative Oncology, which hosted its first symposium on March 4.

Michael B. Kastan, MD, PhD, executive director of Duke Cancer Institute, said successes from partnerships in comparative oncology, like those at the symposium, will foster a collaborative culture between oncologists studying both patient populations. “We want to set a standard which everyone else wants to emulate, and we are hoping that this could be a national movement,” he said.

With that mission, DCI is extending membership for collaborating faculty from other institutions involved in cancer research with access to all shared resources. A Joint Institution Funding Opportunity up to $100K is also offered for pilot projects. “We need to keep the foot on the pedal in order to keep moving things forward. It’s not something that just happens organically because of people’s interests.” 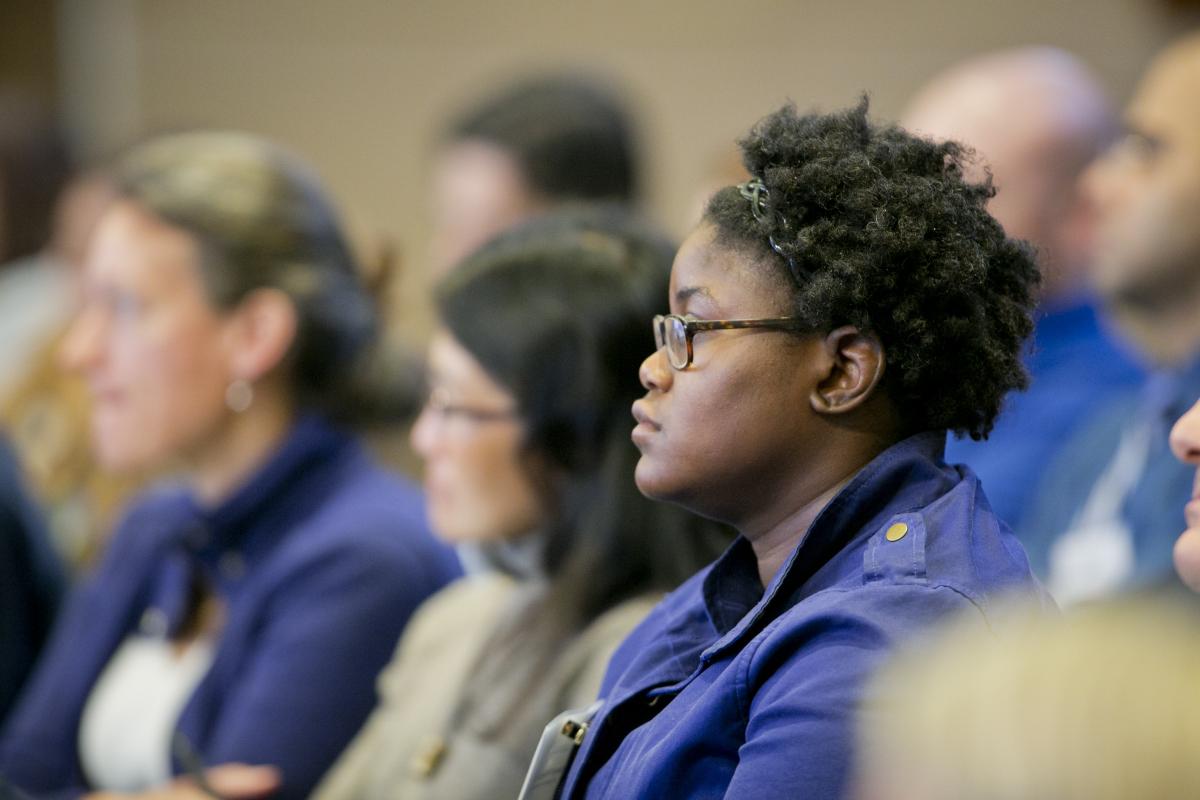 In her keynote address, Amy LeBlanc, DVM, director, NCI Comparative Oncology Program, said that comparative oncology’s big challenges included acceptance by key stakeholders in drug development and development of platforms to support translation across species. “We are poised to make huge improvements in how comparative oncology can contribute to the field,” she stated.

Certain dog breeds are also genetically predisposed to specific cancer types, suggesting strong genetic selection and gene-environment interactions. As an example, squamous cell carcinoma of the digit, a common nail bed tumor in dogs, occurs only in black poodles leaving light colored poodles almost entirely unaffected. Translational studies pinpointing specific genetic triggers in canine cancers can hence potentially reveal therapeutic and diagnostic biomarkers for aggressive human cancers. Matthew Breen, PhD, from NCSU’s college of veterinary medicine, cited the importance of creating more canine biobanks mapping the geographic distribution of dogs, such as the one by Canine Comparative Oncology and Genomics Consortium (CCOGC) and Pfizer. Among the many uses of such databases is to measure biological impact of environmental disasters, a process that takes decades in humans.

Mark Dewhirst, DVM, PhD, from DCI, emphasized bringing together veterinarians, material scientists, imaging experts, medical and radiation oncologists and getting them to communicate in a common language, a key requirement for collaborative multidisciplinary research. “It’s not trivial,” he said. “For example, we have taught mechanical engineers who study heat transport to understand the biology and applications of therapeutic hyperthermia in dog and human cancers.”

To learn more about the Consortium for Canine Comparative Canine Oncology, visit C3O.