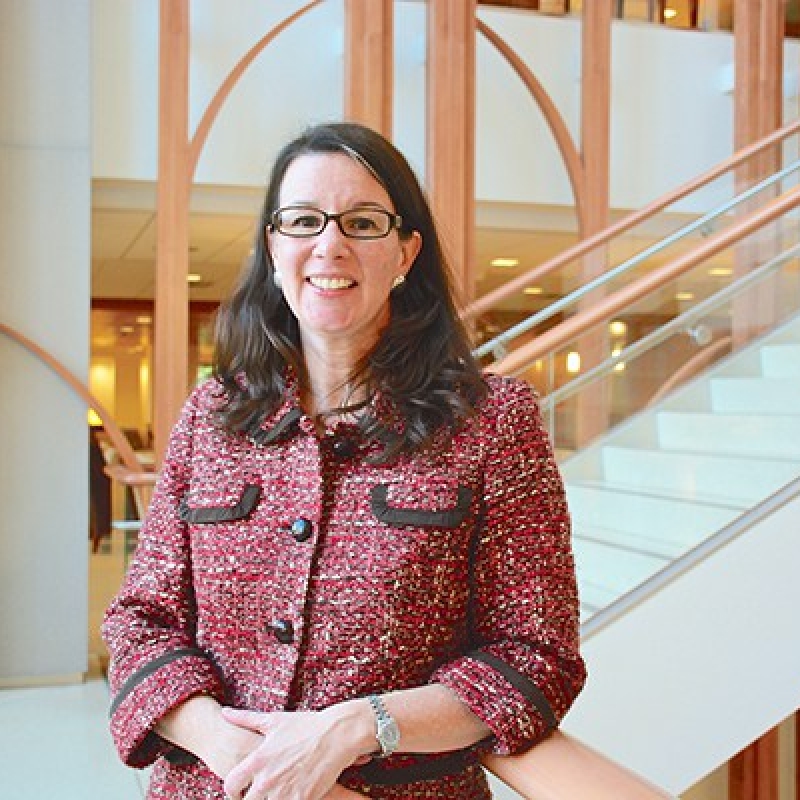 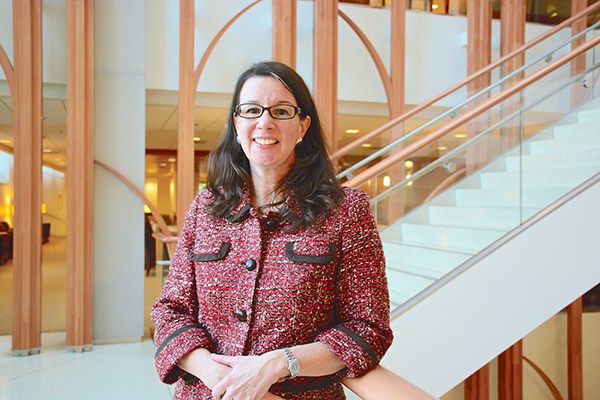 After 23 years in oncology care and administration, Tracy Gosselin, PhD, RN, AOCN, assumed the role in August of CNO for Duke University Hospital.

When she began her nursing career, Tracy Gosselin, PhD, RN, AOCN, the new chief nursing and patient care services officer for Duke University Hospital (DUH), chose right away to specialize in oncology. As a student nurse in her native Boston, she had worked with many cancer patients. Why cancer?

“Why not? I loved the patients, their stories, their families, their journey that they were willing to share,” she explained in an interview from her new office at DUH.

She said that the young Tracy Gosselin thought to herself, "Wow, I really like this, I think I can make a difference."

"So transitioning into the nurse role after graduating, that’s what it was about, that I could make a difference in someone’s life — recognizing that it may not always be for cure but it might be for hope.”

Twenty-three years later, as she takes up the most senior nursing position at Duke University Hospital, Gosselin is being praised for the many contributions she made to cancer care and nursing leadership at Duke.

During her time with DCI and ambulatory services she oversaw nursing practice, education and patient care for numerous multi-site practices, infusion and research areas. She led nursing areas through clinical redesign efforts, served as the nurse leader for the development and implementation of triage services and participated in a variety of health system nursing initiatives. 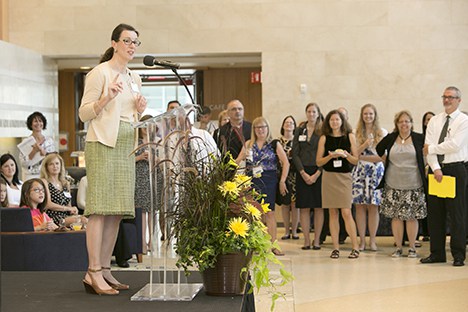 Gosselin bids former DCI administrator Carolyn Carpenter adieu at a 2014 farewell reception when Carpenter was named interim senior vice president of operations for Duke University Hospital.Carolyn Carpenter, current chief operating officer for Duke University Hospital and Gosselin’s supervisor for 11 years, said that Gosselin has been active in many community oncology organizations and education forums and has also been engaged at the national level in nursing leadership.

“Tracy’s leadership is distinguished by her extremely effective advocacy for our patients, for our nurses, and for our teams,” said Carpenter. “She’s brought her very practical notion, ‘everybody needs a nurse,’ to bear on how the profession of oncology nursing should advance.”

Gosselin began her career at Duke as a staff nurse in 1993 on a Duke Hospital inpatient oncology unit, and has served in clinical and administrative positions of increasing scope and responsibility throughout her career.

“Management is like solving a puzzle,” said Gosselin. “You have many stakeholders. You have patients, their loved ones, our staff, our physicians, our advanced practice providers and all the other team members who help take care of patients. You manage the forest and you’ve got to manage the trees, so you continuously move between the mission vision and the work.”

Looking back at her DCI career she said that “one of the most exciting things we did was open the Cancer Center in 2012."

At the time Duke University Hospital was experiencing growth in the cancer patient population, cancer clinics were dispersed, and services weren’t contiguous. Gosselin, who served as in the primary operations role for the planning, construction and transition into that new ambulatory cancer building, explained that the goal was to consolidate all the services within the same building and get the multidisciplinary teams in one space along with the supportive services.

“I am proud of the teamwork that went into the launch, and of the engagement with our patients and families, through focus groups, about what they wanted in the building,” said Gosselin. 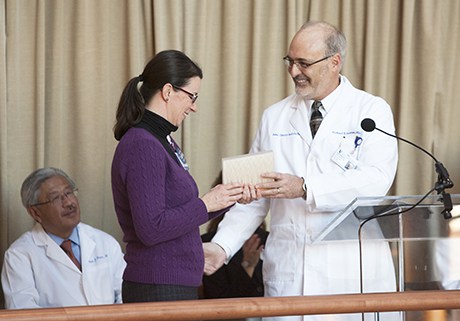 As former chancellor for health affairs at Duke University Victor Dzau, MD, looks on, Gosselin accepts a gift from DCI executive director Michael B. Kastan, MD, PhD. In 2012 at a Open House for Duke Cancer Center, Gosselin was recognized for her invaluable contributions to its formation.She never loses touch with the basics, and for Gosselin that remains the patients. No matter how busy she is, she’s made it a practice of ducking into inpatient rooms, unannounced, to visit patients a few times a week, and she said that continues.

“I’m pretty comfortable with knocking and saying who I am and asking about their experience,” she said. “They make it real at the end of the day. If I ever did not have that, for me it would be challenging.”

These “informal” visits also include greeting nursing and other staff and thanking them for what they do.

“Providing direct care is not easy, because our patients are sicker,” Gosselin said, “These are not the same patients I took care of 23 years ago. The frontline nursing assignment today is a little more challenging because it’s a different acuity level.”

She explained that years ago, cancer and other patients were admitted for many procedures and services that today are managed in outpatient settings. Thus, the ones who are admitted, tend to be sicker.

In her new position, Gosselin has leadership responsibility for nursing practice across the continuum of care at Duke University Hospital, including the inpatient and procedural units, as well as ambulatory care areas. She’s also serving on the DUHS Nurse Executive Council where she will assist other nursing colleagues with the development and implementation of a health system nursing strategic plan.

It is Duke’s good fortune that the hospitals in Boston, including the Dana Farber Cancer Institute, didn’t have any full-time jobs available when Gosselin graduated back in 1993 with a bachelor of science in nursing from Northeastern University College of Nursing.

Gosselin joked that she signed on as a staff nurse at Duke and for a couple years “threatened” that she would return home, but instead went to graduate school at Duke, getting her master of science in nursing from the School of Nursing in 1997, and has been here ever since. She also went on to complete a doctorate, with an emphasis in cancer research from the University of Utah’s College of Nursing in 2012.

“I’ll take this winter over snow and more blizzards,” laughed Gosselin. A runner in her spare time who enjoys being outdoors “even when it’s super-hot and humid,” she said her sense of humor also helps keep her on track.

“When my humor’s gone I’m going to have to… well, I’ll l re-evaluate,” she said.