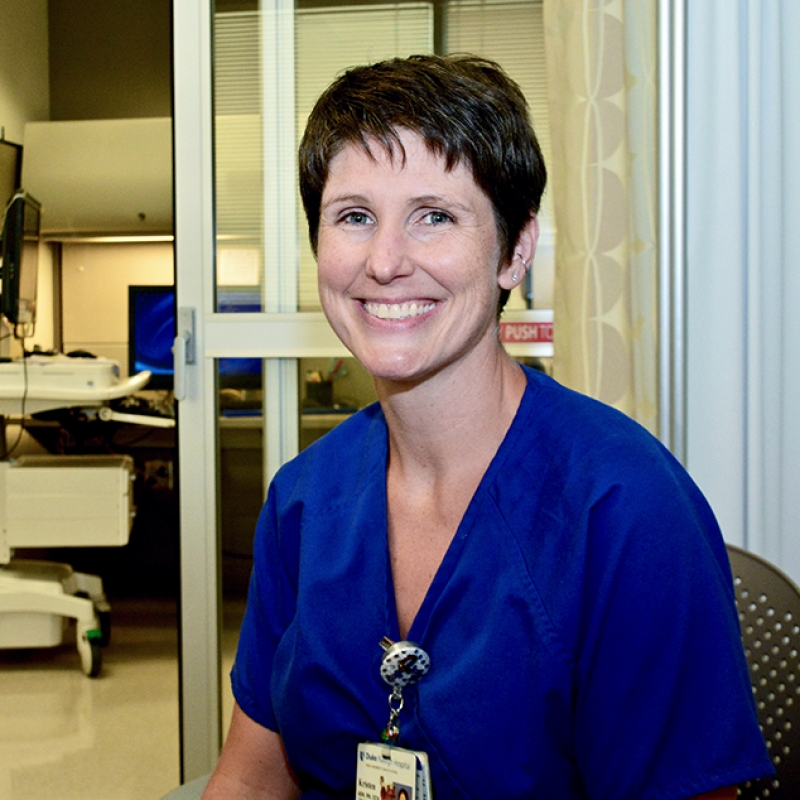 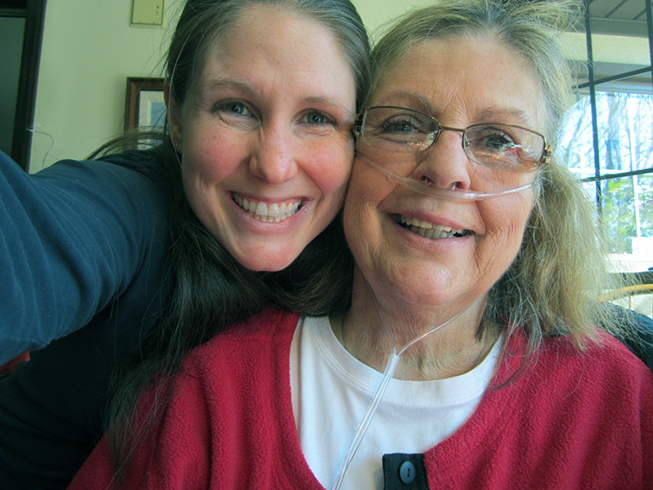 Kristen Walden, RN, BSN, OCN, CSN III, takes a selfie with her mother Barbara Sladek just before she passed away from lung cancer in 2012. Since then Walden, who cares for patients at Duke Cancer Center Raleigh, has teamed up each year with the Lung Cancer Initiative to raise awareness and funds.It was September 2016 and by the looks of it, Kristen Walden could give birth at any moment. No matter how heavy with child she was, Walden would not miss this run. For her, the event was so much more than just another 5K It was a memorial of sorts — an opportunity to remember the one person who had made the greatest impact on her life — her mom.

“My mother was a formidable woman — a battleship,” Walden shared proudly. “Because of her, I grew up knowing I wanted to work in medicine. I would listen each evening to my mother, a certified registered nurse anesthetist (CRNA), and my father, a dentist, discuss their workdays. My ability to nurture or care for others, I learned from Mom.”

Walden, an infusion nurse at Duke Cancer Center Raleigh, first took part in the 5K run, a Lung Cancer Initiative of North Carolina event, in 2013, just months after her mother passed away from metastatic lung cancer.

Walden’s mother, Barbara Sladek, had taken time off in February 2012 for minor surgery on her foot. However, when it came time to remove the endotracheal tube post-surgery, Sladek struggled to breathe on her own. Her surgeon ordered a CT scan.

“They found a massive tumor in her lung,” said Walden, who at the time was on maternity leave after giving birth to her first child — Sladek’s first grandchild. “Because the cancer had spread, surgery wasn’t an option. Mom’s oncologist prescribed an oral chemotherapy, which, on the upside meant she didn’t have to come to the hospital for outpatient treatments. Mom was able to continue to do the things she loved.” 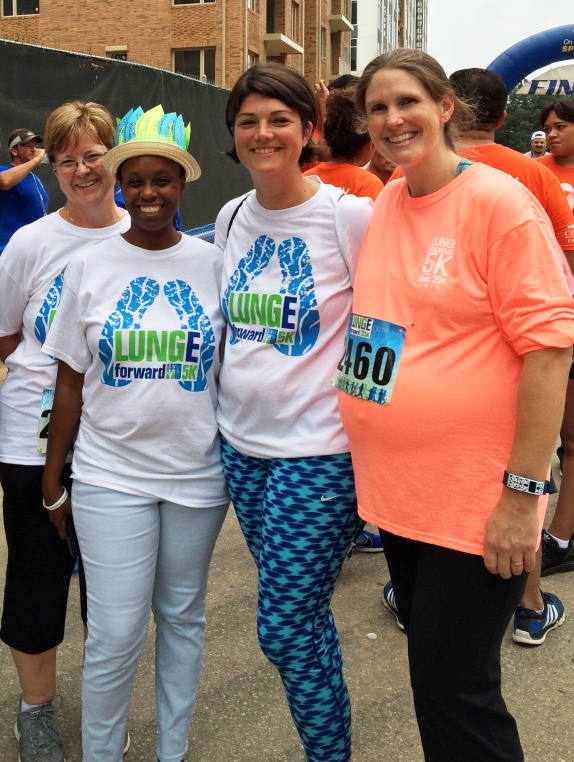 Walden said her mother “packed” all she could into the last nine months of her life. She spent time rocking the four grandbabies, including Walden’s, who made their debut during her last months. Sladek and her husband traveled abroad to Ireland and Scotland; places Sladek had longed to visit. The couple also trekked west to take a leisurely drive up California’s rocky coastline — a destination trip formerly on hold for their retirement years.

“Because she was a nurse Mom knew her cancer was incurable,” said Walden. “Yet she insisted on living fully right up to the end. She was never one to give in.”

Life was complex for Walden. Of course, her beautiful newborn daughter Liesl depended on her for everything. Yet Walden knew the remaining time with her mother was very short.

“The hardest part of a diagnosis of cancer is that the world continues to go on without you,” she said. “You see people and they’re living their lives. They’re going to McDonalds. They’re dropping their kids off at daycare. You want to go up to them and say, ‘But you don’t understand. My Mom was just diagnosed with cancer; she’s dying.’ And it so hard because you can't just stop living your life; you still have to do the day-to-day stuff.”

As it turned out, being a caregiver for her mother actually helped Walden navigate the “baby blues” she experienced after the birth of her daughter. Learning to care for her newborn helped her take her mind off the anticipation of the unimaginable loss that lie ahead, even if only temporarily.

“It was good that I had Liesl because I couldn’t just collapse,” she said. “I had to get up and take care of her. On the other hand, my mom’s battle with cancer also kept me from wallowing in how difficult motherhood could be. I had to move. I had to help.”

Walden took up competitive running — she said with a wink, “to burn off the crazy.” When Walden heard about the Lunge Forward 5K, there was no hesitating. She signed on.

“If I’m going to pay my $25 to participate in a run, I couldn’t think of a cause more meaningful or worthwhile than Lunge Forward,” Walden said. “That first year I put together a team of my colleague 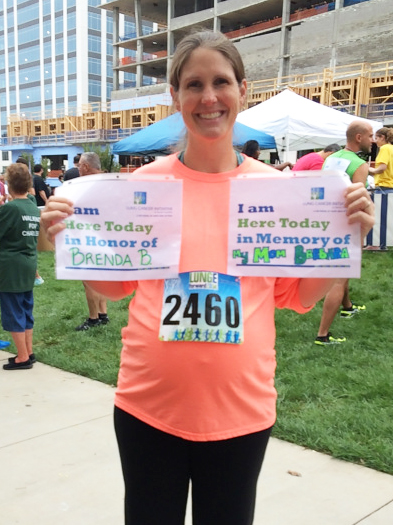 s, and we have participated ever since.”

Walden’s 15-member team, the Duke Raleigh Lung Rangers, is, said Walden, “going all out this year to raise both awareness and funds.” In fact, the team is organizing multiple wrap around events with hopes of bolstering their totals. The team has partnered with Event Espresso to host an Espresso Bar on July 6 in the lobby of Duke Raleigh Hospital. An anonymous donor is matching funds raised through the event.

The Duke Raleigh Lung Rangers also plan to sell tickets the week of July 16 for “epic” gift baskets, one of which will feature two tickets to a Carolina Panthers game. Drawings for the themed baskets will take place on Wednesday, July 25.

Walden will host a Color Me Mine party on Saturday, Aug. 18, at 6 p.m. in Cary. Guests will sip wine and paint pottery. Proceeds will benefit the team.

“To me one of the most important things is to raise funds,” said Walden. “If you look at the facts, lung cancer is the leading cause of death in the U.S. More people die from lung cancer than from the other three leading cancers — breast, prostate and colorectal — combined. Yet, I think for every dollar that breast cancer gets for science, lung cancer receives as little as 25 cents. We need to do better.”

Walden and her team will step out Sunday, Sept. 23, for the 2018 Lunge Forward 5K and Walk. The event starts and finishes at Midtown Park at North Hills in Raleigh, North Carolina. For more information on upcoming team wrap around events or to join the Duke Cancer Center Raleigh's team, the Duke Raleigh Lung Rangers, email Kristen Walden or visit DRLR.