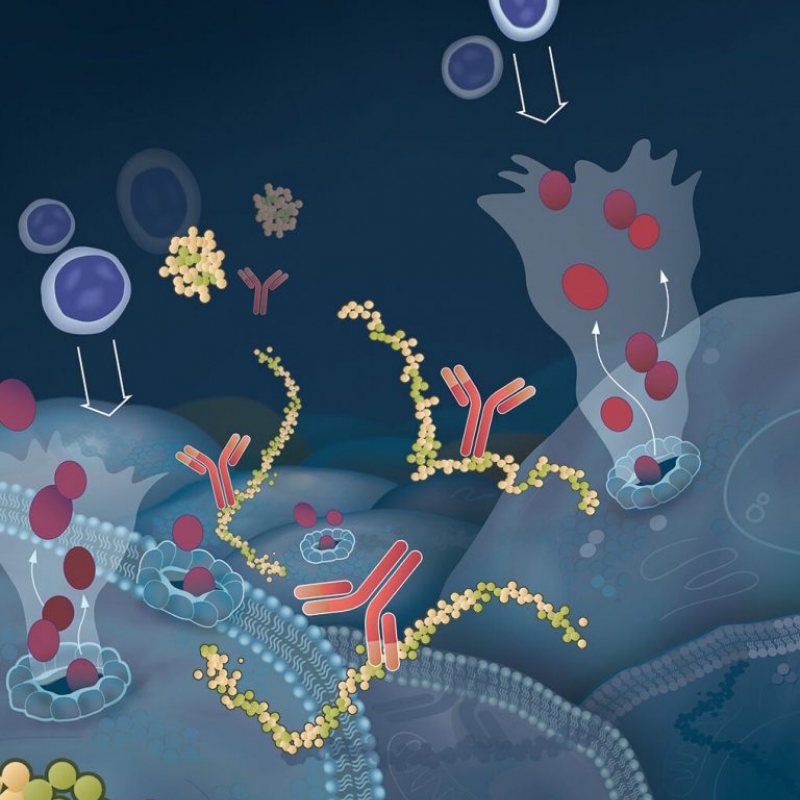 In 2010, clinical radiologist Edward Patz, Jr., M.D. and colleagues first identified a unique auto antibody, in some early-stage lung cancer patients, responsible for setting in motion a process that deactivates the protective “force field” around cancer cells making them vulnerable to attack by the body’s own immune system. Now, a drug they developed based on this discovery is in a phase 1b clinical trial.

A decade since it’s discovery, a first-in-class, novel targeted immunotherapy developed at Duke Cancer Institute, has been brought to a phase 1b trial for patients with advanced-stage non-small cell lung cancer who have exhausted other therapeutic options.

The trial opened for recruitment through the Thoracic Oncology Program at DCI beginning in June and is still recruiting patients.

“We've got a really interesting homegrown drug here that nobody else is offering. It’s the first completely human-derived antibody developed as an anti-cancer therapy, and is very different from other immunotherapy approaches,” said Edward (Ned) F. Patz, Jr., MD, the CEO of Grid Therapeutics, LLC, the biotechnology company that developed the drug. “We believe this drug will be effective in many solid tumors and we're expecting it to have very little toxicity and side effects.”

To say that Patz, a Duke Cancer Institute clinical radiologist and professor in the departments of Radiology, Pharmacology and Cancer Biology, and Pathology, is “enthusiastic” about this latest DCI bench-to-bedside advance, his “baby,” is an understatement.

“I’m delighted with this program,” said Patz. “We came up with this here at Duke. It was a theoretical concept. We tried it in the lab. We figured it out. We’ve moved it forward. We (the field) are not doing very well with lung cancer. We need better drugs out there.”

Non-small cell lung cancer (NSCLC) accounts for about 85% of lung cancer cases, and the majority of patients have advanced stage disease at diagnosis. There’s a great need for new NSCLC therapies that work better and are less toxic.

“Lung cancer remains the number one cancer killer in the US. Too frequently our older, standard treatments will not work for patients and they carry many side effects,” said Jeffrey Clarke, MD, principal investigator on the trial and associate co-director, Cell Based Immunotherapy, at the DCI Center for Cancer Immunotherapy. “Fortunately, we have seen dramatic changes in recent years in the treatment landscape for lung cancer with new immune and targeted therapies. We still have a long way to go though, and we need to continue adding to our armamentarium in the fight against lung cancer. Our hope is that exciting drugs like GT103 result in improved side effect profile and increase survival for patients and their families.”

It was back in June 2010 that Patz, Michael J. Campa, PhD (an associate professor in the Duke Department of Radiology) and Elizabeth Gottlin, PhD (an assistant professor in the Duke Department of Radiology) — working out of the Patz Lab — announced that they’d identified a special kind of autoantibody present in the blood of some lung cancer patients with early-stage tumors whose presence was associated with tumors that never progressed to advanced disease.

This autoantibody appeared to work by targeting or locking onto a conformational epitope (a very distinct and unique structural part) of the complement factor H protein and disabling the protein.

CFH is a protein that binds to the cell surface and helps regulate a system of proteins (the complement system) that work together with the body’s immune system cells to destroy foreign invaders like bacterial infections and viruses while also protecting healthy cells from unnecessary immune system attack.

CFH also protects healthy cells from destruction by inactivating the complement C3b protein on the cell surface, whose job it is to promote complement activation (degrade the membrane), opening the door for the immune system’s fighters to enter and destroy the cell.

CFH protects cancer cells in a similar way. It doesn’t recognize them as unhealthy cells or foreign invaders. However, Patz and Campa theorized, the special autoantibody, in binding to that distinctive CFH epitope and disabling the protein (only on cancer cells), was able to allow the C3b protein to promote complement activation, which degraded the membrane and allowed for the subsequent destruction of the cell by the immune system. (This particular epitope seems not to be present in the CFH protein found on normal cells, so the antibody does not recognize normal cells. 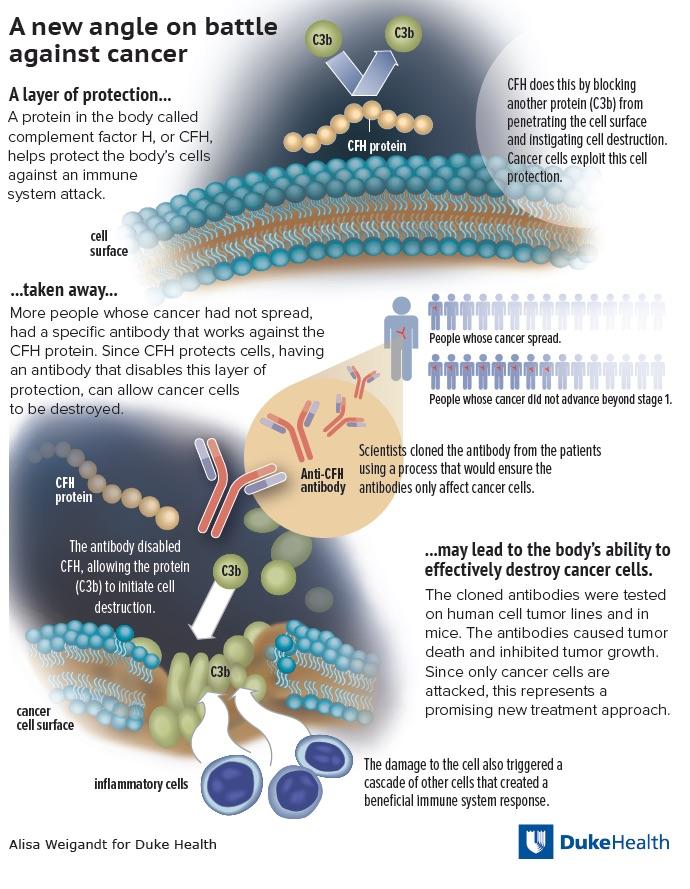 “This was the first time ever this approach had been used to develop a new cancer drug,” said Patz.

First, specific antibody-producing B cells (a type of white blood cell) were isolated from the blood of the early-stage lung cancer patients who produced the anti-CFH antibody. Then they isolated and sequenced the antibody genes from the single immune cells that make the specific antibodies, producing high-affinity recombinant human monoclonal antibodies, including GT103.

Next, they proceeded to test GT103 in multiple cancer cell lines (in lung, gastric and breast cancer) as well as in lung, melanoma, and brain tumors in living mice. They found that the drug caused tumor cell death and inhibited tumor growth without any obvious side effects.

[More recently, GT103 has also been found, in mice, to trigger an additional adaptive immune response. Together with You-wen He, MD, PhD (DCI member and professor in the Department of Immunology), they found that the drug dramatically reduced the number of regulatory T cells and myeloid-derived suppressor cells. Regulatory T cells normally help curb an over-reaction of the immune system. By reducing their numbers, the immune system could mount an even more lethal systemic attack against the cancer cells. GT103 also reduced the number of myeloid-derived suppressor cells. These cells, which, like regulatory T cells, also help regulate the immune system, are believed to play a role in the promotion of tumor development (angiogenesis), tumor-cell invasion (infiltration of neighboring tissue) and metastasis. So, reducing their numbers was also beneficial. Just why GT103 triggered this adaptive immunity response remains an area of active investigation.]

In September 2016, on the heels of promising  pre-clinical data using GT103 in mouse models, Patz, Campa, Gottlin, Moody and Liao co-founded Grid Therapeutics, LLC to develop GT103. Because GT103 was developed in Duke labs, the technology is licensed from Duke. Grid has the exclusive, global licensing rights to GT103 (the company’s lead asset) [The company is currently financed by a group of private investors].

The lengthy process of preparing for a clinical trial was ready to move forward.

In Oct. 2017, Grid contracted with Catalent Pharma Solutions for the development and manufacturing of the antibody. Meanwhile, the National Cancer Institute’s Experimental Therapeutics Program (NExT) program carried out the pre-clinical safety and toxicity studies, including tissue cross-reactivity testing and toxicology studies.

“This work by the NCI used tremendous expertise and significant resources, validating the innovation of the program,” said Patz. “Our collaboration with the NCI was critical to our IND (investigational new drug) filing with the FDA and moving GT103 into clinical trials,” said Patz, sharing that the application was approved by the FDA in March this year.

The clinical trial  “Phase Ib First in Human Dose Escalation of GT103 in Refractory, Advanced Stage Non-Small Cell Lung Cancer (TOP 1902)” opened in June.  As is the nature of a phase 1b trial, the main goal (primary outcome) is to determine the optimal safe dose of the investigational drug through the dose escalation process. This stage of clinical trial is also single arm, meaning every trial participant gets the drug.

Secondary outcome measures for this trial include the response rate (the proportion of patients who have a partial or complete response to the drug), progression free survival timeframe (the time between the start of treatment and disease progression or death), and the overall survival timeframe (the time between initiation of treatment and death).

The results of the pre-clinical studies conducted in the Patz Lab in lung, gastric, breast, melanoma and brain tumors,  and an awareness that many solid tumor types use the same protective mechanism to prevent destruction of cancer cells by complement, has led Patz to believe in the therapeutic value of GT103 beyond lung cancer to most other solid tumor types.

Patz has already tested GT103 in combination with rituximab in chronic lymphocytic leukemia patients. In a small proof-of-concept study with 11 CLL patients, the results of which were published June 28, 2017 in the journal PLOS ONE, Patz and the other researchers found a significant increase in cancer cell death in five of eleven patient cases. Ten of the 11 had shown no response when only rituximab was used. (Rituximab only kills cancer cells in a limited number of patients when used alone. A non-Duke study had suggested that rituximab-resistant CLL patients did better on rituximab when CFH was disabled, which is what prompted the DCI researchers to try their anti-CFH antibody drug)

However, Grid’s plan for now, said Patz, is “to stay hyper-focused on GT103 dosing and outcomes in lung cancer” before planning clinical trials in other cancers.

If all goes as expected with the current GT103 trial, Patz said he hopes to proceed investigating GT103 trial (at the recommended phase two dose) in combination with other standard immune checkpoint therapies.   He is working closely with the director of the DCI Center for Cancer Immunotherapy Scott Antonia, MD, PhD, and others on the thoracic oncology team on those plans.

Having gotten this far along in the bench-to-bedside process — even with some unexpected delays, including a global pandemic — may seem to be a long time coming, especially to the DCI researchers behind it. But this is not unusual in the world of drug development.

While cancer research and treatment has come a long way over the past couple decades — moving from non-selective highly cytotoxic therapies to more selective direct therapies or immunotherapies which, as executive director of DCI Michael Kastan, MD, PhD, puts it, “hit the Achilles’ heels of tumor cells” — the process of developing new cancer drugs remains challenging, slow and costly.

Cautioned Clarke, “The vast majority of cancer drugs tested in clinical trials don’t make it to the FDA-approval stage. Numerous don’t even make it from testing in the lab to clinical trial.”

For more information or to be considered for enrollment in the “Phase Ib First in Human Dose Escalation of GT103 in Refractory, Advanced Stage Non-Small Cell Lung Cancer (TOP 1902)" trial, contact the Thoracic Oncology study team at 919.681.4768.

CIRCLE PHOTO (top): Normal cells are protected from the host immune system by multiple different mechanisms; tumor cells can amplify these same protective strategies. The Grid antibody recognizes and inactivates one of the essential immune protective proteins, CFH, which resides on the cell surface.