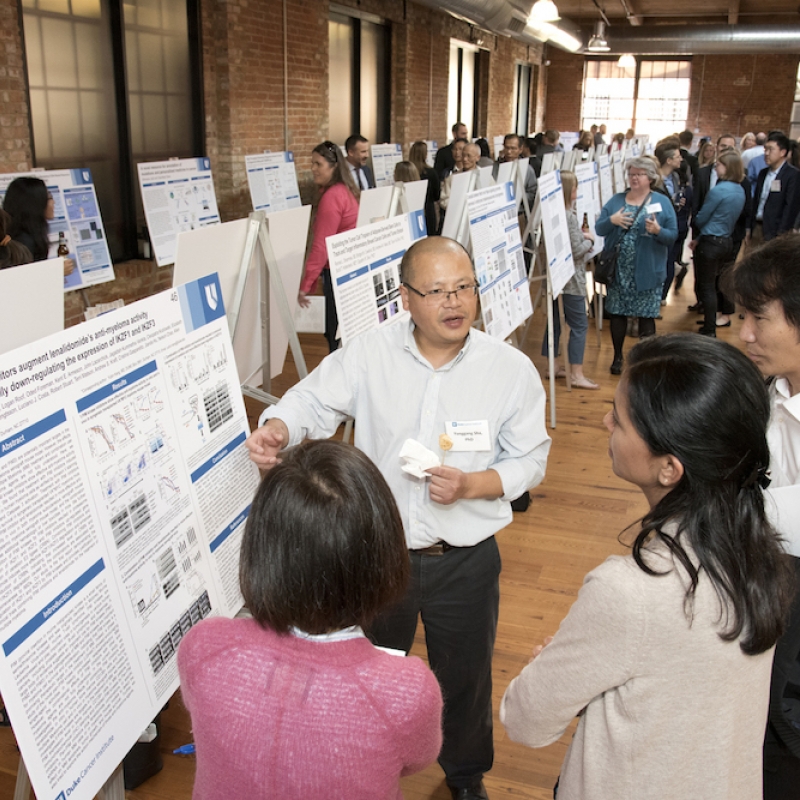 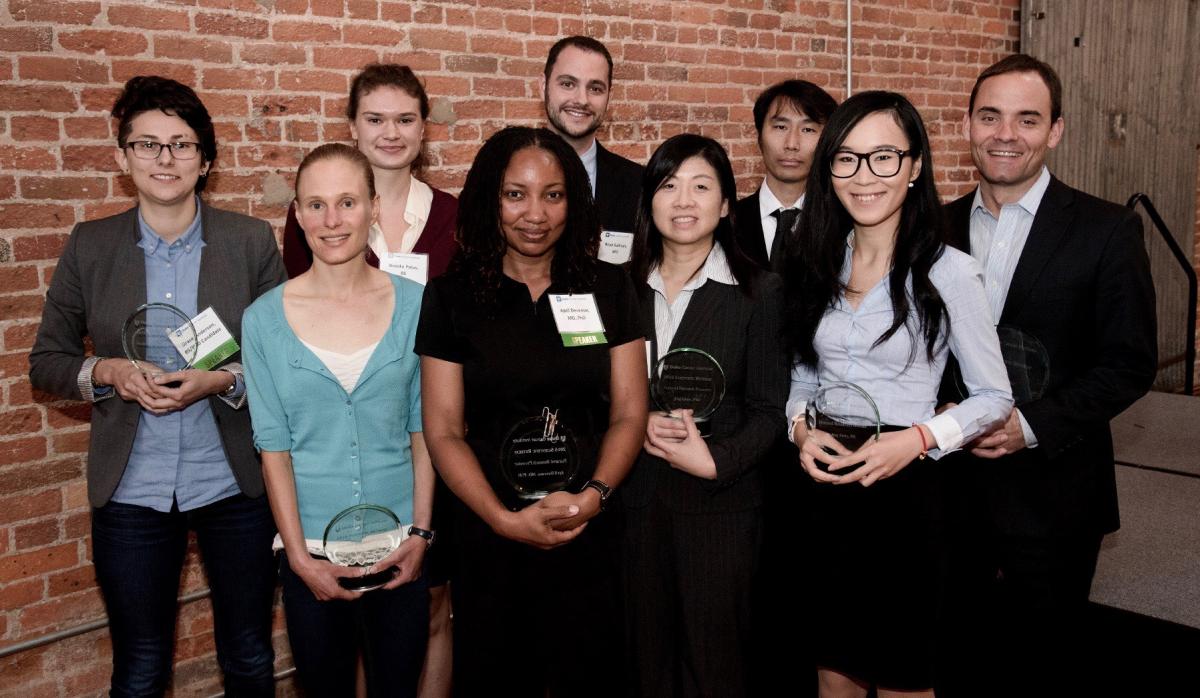 For the first time this year, in a tradition that will continue at subsequent retreats, the work of a DCI faculty member was highlighted in addition to the recognition of eight up-and-coming scientists — all of whom presented their latest research findings in the areas of basic, clinical, population and translational science.

Brooke Palus, a second-year graduate student working in the lab of Sandeep Dave, MD, MS, MBA, was the recipient of the Robert and Barbara Bell Award for Basic Science Cancer Research for her work in canine comparative oncology.

She presented “DDX3X is a Novel Tumor Suppressor Gene in Canine and Human Lymphomas.”

“My research is based on my efforts to identify the genetic drivers of lymphoma in both of these species and our goal is to use dogs as a model for lymphoma in order to develop improved and novel lymphoma treatments,” said Palus. “It’s very exciting to me that people are so interested in comparative oncology.” 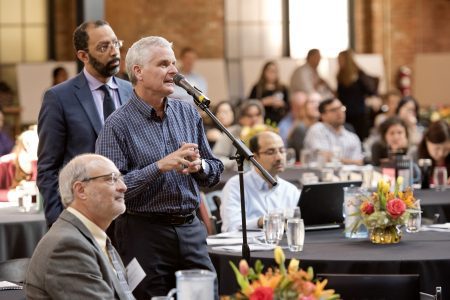 DCI researcher Donald McDonnell, PhD, at the microphone, lines up with keynote speaker Levi Garraway, MD, PhD, and gives feedback on a research presentation as director of DCI, Michael Kastan, MD, PhD looks on. Sullivan, whose paper was titled “Risk Factors Associated with the Development of Adenoma Multiplicity in a Screening Cohort,” said he appreciated the opportunity to share his research with DCI faculty and students, “gain important feedback and potentially develop important collaborations.”

DCI faculty member Charles Gersbach, PhD, whose lab’s scientific interests involve developing innovative methods in molecular and genetic engineering, started his presentation speaking about the widespread technology of genome editing that has “revolutionized cancer research and therapy,” pointing out that this technology featured in many of the retreat’s presentations and that Hollywood, in the form of a new Jennifer Lopez bio-terror drama “C.R.I.S.P.R,” has even taken notice.

“Unless you’ve been in a cave you’ve probably seen something about genome editing or genome engineering somewhere in the popular press,” he said.  “Genome editing and all of the new technologies with genome editing and the newfound control that we have over our genomes and the genomes of everything around us, including plants and other organisms, is infiltrating every aspect of our lives… and of course is relevant to us in science and cancer.”

However, most of Gersbach’s talk focused on the excitement around the next big thing — developing epigenome editing technologies; finding a way to modify or target DNA at very specific sites within the genome. 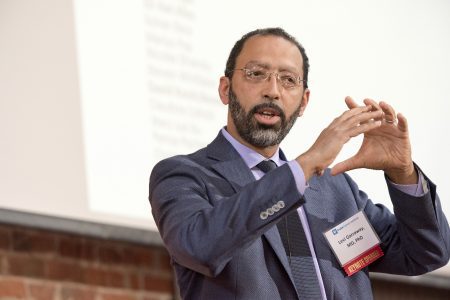 The Michael Colvin Memorial Lecture was given by Levi Garraway, MD, PhD, of the Dana-Farber Cancer Institute and Harvard University. Harvard physician-scientist Garraway, on the blue ribbon panel of advisors for the national cancer moonshot initiative and soon-to-be vice president of global development and medical affairs at Eli Lilly and Company, delivered the keynote — “New Frontiers in Cancer Precision Medicine” — on a related topic.

Garraway laid out “one of the great challenges” and, at the same time, “a big paradox” facing cancer researchers today: that durable control of cancer will require “higher-order therapeutic combinations” — combinations that would be too toxic if they hit their target.

His lab, specifically, is engaged in genomic and functional studies to elucidate cellular pathways perturbed by recurrent genomic alterations in cancer, and to identify avenues for therapeutic intervention, with an emphasis on melanoma and prostate cancer.

“One can argue that the technological advantages and discoveries of cancer genomes in the past decade have brought us to the end of the beginning and now the hard part really starts,” said Garraway, explaining that precision medicine will need to entail “a multifaceted genetic and molecular approach.” 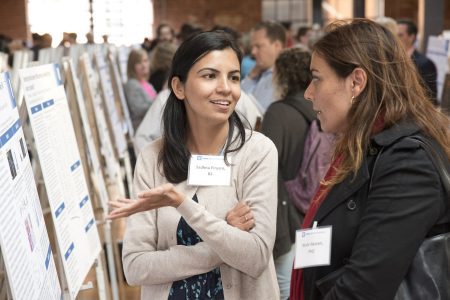 The closing poster session inspired a lot of discussions about the latest advancements in cancer research. More than 200 physicians, researchers, and staff attended this year’s DCI Scientific Retreat.

*Before his loss in 2013, O. Michael Colvin, MD, served as Director Emeritus of the Duke University Comprehensive Cancer Center and Professor Emeritus of Medicine at Duke University School of Medicine. Colvin was a founding senior editor of Molecular Cancer Therapeutics. His many achievements included pioneering work on drugs that damage the genetic material causing cancer cells to replicate. He was one of the first researchers to use high-dose cyclophosphamide to treat solid tumors. Colvin was co-leader of the Duke Cancer Center’s Experimental Research Program. Over the course of his career, he published more than 150 scientific articles. Begun in 2015, the O. Michael Colvin Memorial Lecture is a featured highlight at every DCI Scientific Retreat hence.