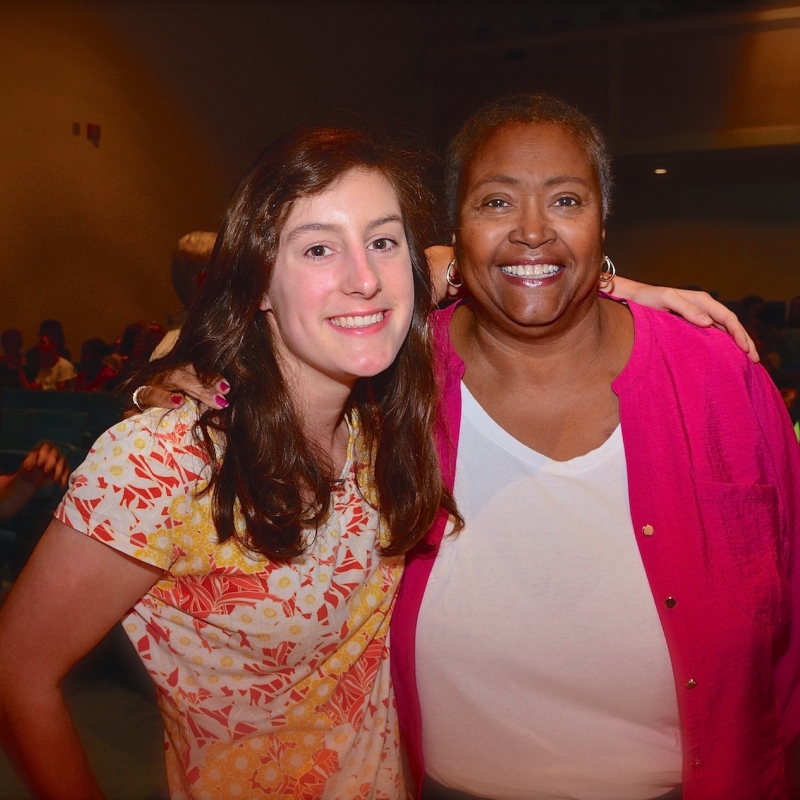 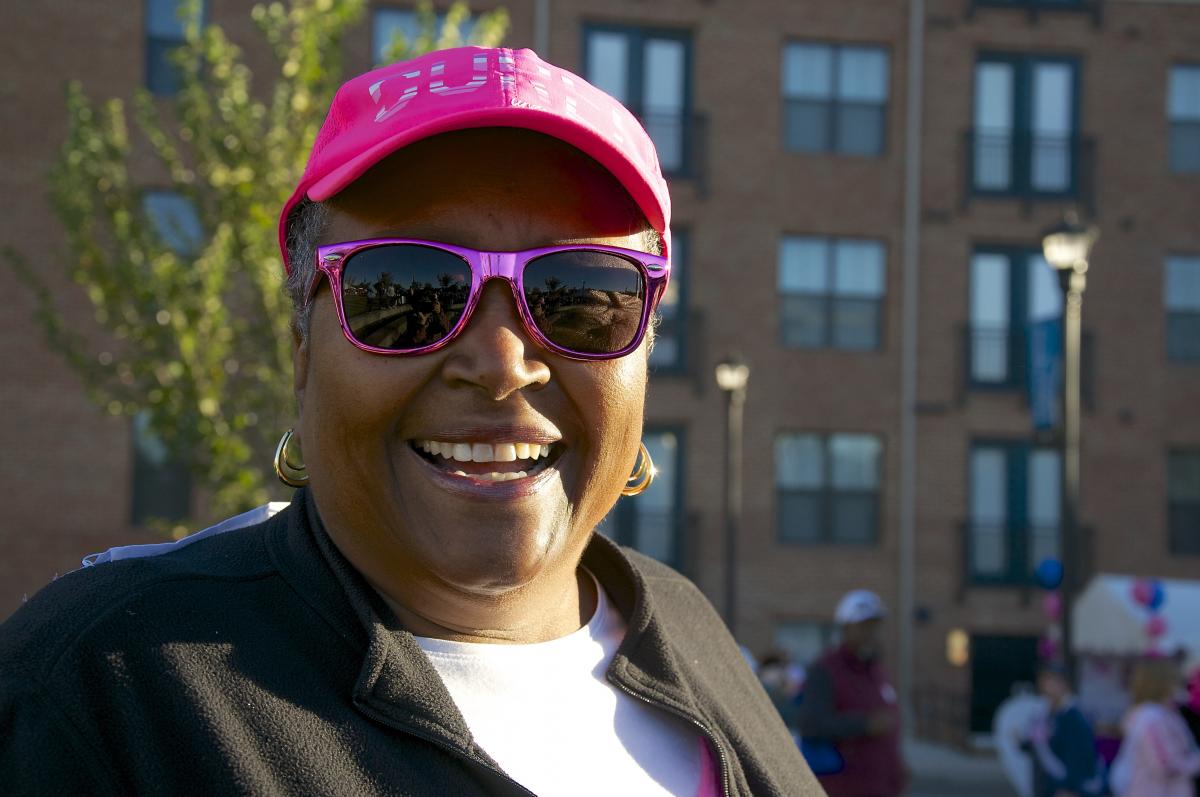 Ann Smith, 69, was diagnosed with breast cancer in 2014 while living in New York. During the course of her treatment, Ann and her husband, Ivin, moved to Durham, North Carolina. Ann recently completed her treatment at Duke Cancer Institute. She is pictured here at the Oct. 17 Making Strides Against Breast Cancer walk event. Ann participated on Team Duke Cancer Institute and is the team's top individual fundraiser, having collected $2,210 to help keep breast cancer research moving forward.My father, Dan George, is a urinary cancer doctor, so I grew up meeting different patients of his, going to exotic places where his research conferences were held, and talking with his staff at their Christmas parties. I never really understood what cancer was or how it affects people, I just knew my dad was a doctor that saves peoples lives. I know that sounds like a teenager's simple understanding of what her parent's job is, so the summer after my sophomore year of high school I decided to volunteer at the Duke Cancer Center to find out what it is my dad actually does. I would spend most of my time sorting files in the back room or doing inventory in the boutique, until one afternoon when I was sent to help over at the main part of the hospital with the in-bed patients.

Patients were lying in bed, exhausted from one procedure they went through that day. The people around them were staring over them with lines of worry painted across their foreheads. Nurses and doctors were going from door to door, always taking a pit stop at their desk to switch out their clipboards. I was so enraptured with all the tubes and IV bags surrounding each patient with a mutation diverse from every other case in its life and treatment that all I saw was their disease. It wasn’t until I was asked to go and spend sometime talking with a man and his family that I begun to see the parallels between their lives and mine, that I begun to understand that these patients were people just like me. Cancer isn’t some disease that happens only to people who live off in some foreign land; cancer can happen to anybody, and will happen to people just like you and me. My reason for writing these stories is to tell these peoples’ real stories because I want people to realize that they will probably know someone with cancer in their lives. Each year an average of 12.7 million people are diagnosed with cancer and 7.6 million people die from it. I believe that understanding how cancer affects peoples’ lives is important, but more so is understanding how these people relate to us, because one day we might be put in a situation that will challenge us similarly to the way these people are. 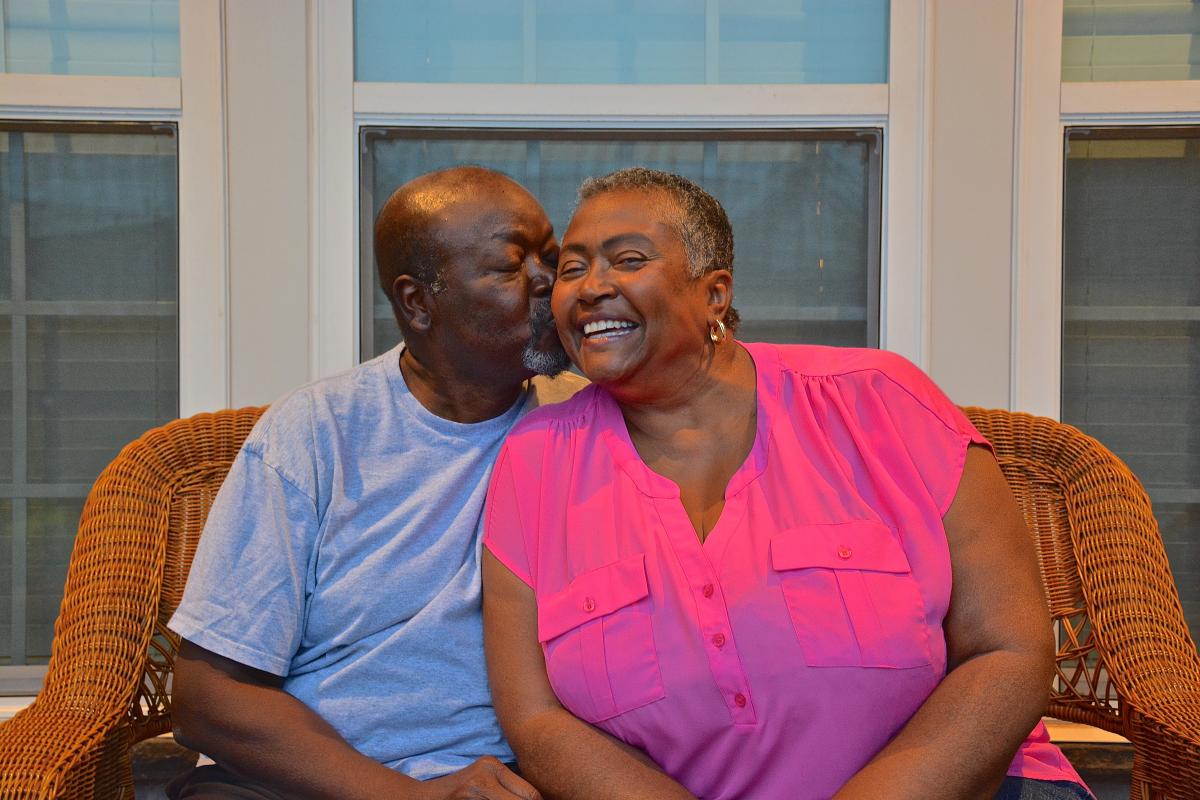 Ann gets a smooch from Ivin while sitting on the front porch. A former high school teacher, Ann is now enjoying her retirement years in the couple's new home in Durham, North Carolina.Ann Smith is a woman who is more than competent when it comes to dealing with the affects of cancer on others. Ann’s mother, father, sister, two brothers, and oldest daughter have all battled cancer, but so has Ann herself. You would think that this would cause someone to lose hope in a positive outcome, but Ann believes the opposite: “I have been given a strength and I have been give an intelligence and I have to apply those things to other people’s situations, but also to my own situation. These are the things I feel see me through.” She has a powerful character that helped her persevere through her most challenging experiences.

Ann recalled her struggle with chemotherapy, which caused her severe joint and muscle pain, fatigue, blood clotting, and it also contributed to the development of a pulmonary embolism, (a blockage of the pulmonary arteries in her lungs). She remembers her move from New York to Durham during this time; “I was exhausted. My husband, Ivin, had to coordinate our move while I rested and recuperated.” Although Ann is a very lively and energetic person, her chemotherapy treatment forced her to slow down. She expressed her gratitude at this time for the support she got from her family, friends, and doctors. Ann believes that “we need to give back. We need to help the people coming behind us just as the people who were ahead of us reached back and helped us.” The support people gave her during this difficult experience really helped her to find the strength to keep on persevering. About one in eight women in the United States will get breast cancer during their lifetime, and Ann wants to help give back to others who are going through a similar experience to her’s: “Even though I wont always be an active patient at the Duke Cancer Institute I still plan to be involved.” Ann is an incredible inspiration to me about the kind of supporter I want to be to people in that situation. She shows me that even in the toughest situation we must always have faith in a positive outcome.

October is Breast Cancer Awareness Month. Eleventh grader Ellie George and her friends are raising awareness about cancer through the sharing of stories, educational information and also by hosting fundraisers over the course of the school year. Funds raised through these campus-based events, such as an upcoming bake sale featuring cookies in the shape of awareness ribbons, will benefit cancer research conducted at Duke Cancer Institute.

Circle photo (top): Ann, who on Monday, Oct. 26, spoke to Durham Academy high school students about her journey with cancer, poses with Ellie George, an eleventh grader at the academy. Ellie is the daughter of Duke medical oncologist Daniel George, MD. She is raising awareness about cancer among her peers over the course of the school year.