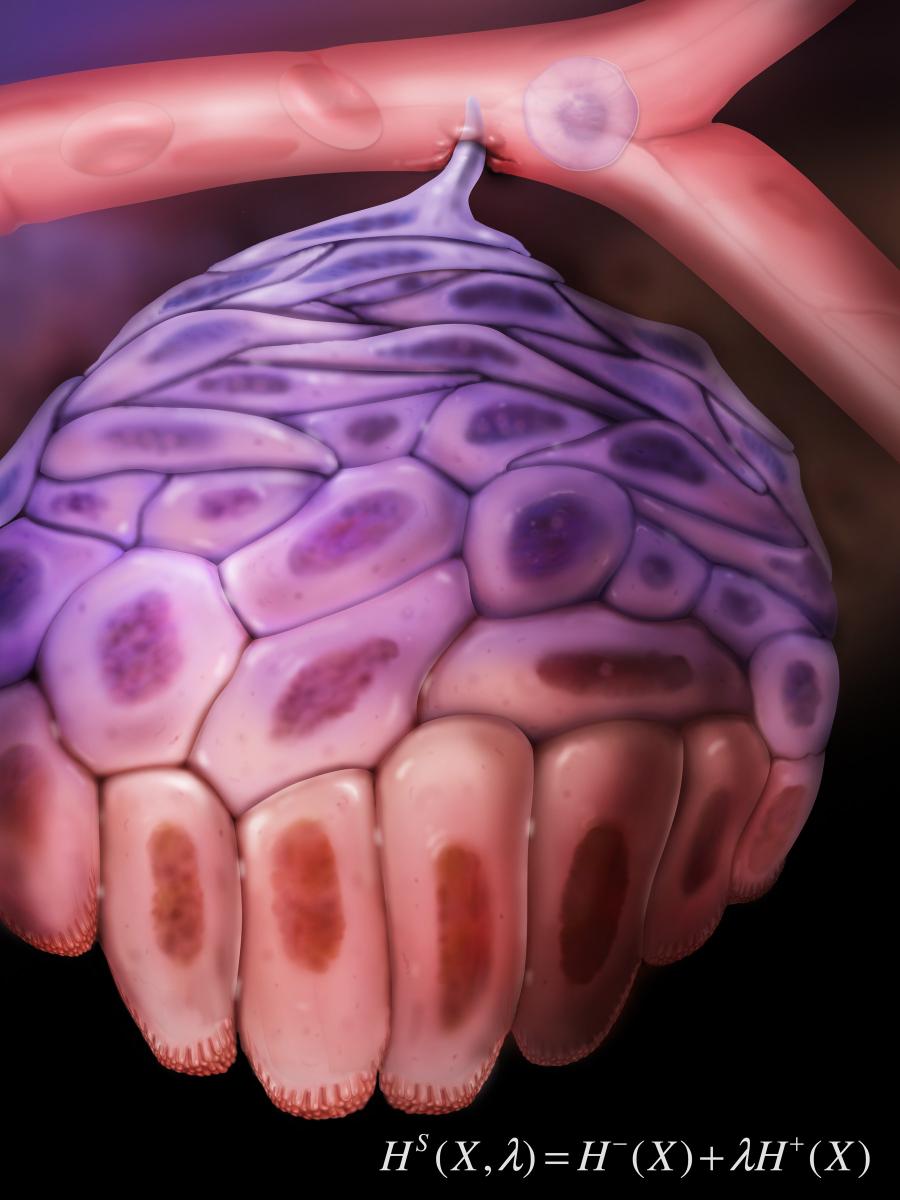 Image of a sarcoma tumor undergoing a transition to a more epithelial-like state: an integrated theoretical-experimental approach. This image is on the cover of Molecular and Cellular Biology, (October 2016, volume 36, issue 19), and is connected with a sarcoma study by Duke University and Rice University researchers featured in that journal.Duke Cancer Institute and Rice University researchers have identified a network of regulatory genes (the microRNA-200 family, ZEB1, and GRHL2) they believe are driving some sarcomas toward a different cell lineage — a condition that seems to predict better patient outcomes.

The culmination of a three-year project, involving physicians, scientists and students, the promising findings are featured in the cover story of Molecular and Cellular Biology, a journal of the American Society for Microbiology (October 2016, volume 36, issue 19); out in print on September 12.

“Phenotypic plasticity has not been well-studied in sarcomas,” said Jason Somarelli, PhD, the lead and corresponding author of the article. “That is part of what makes this study unique.”

Sarcomas are a diverse and relatively rare group of malignant tumors that develop in soft tissue and bone, but the incidence rates have increased over the past 35 years. According to the National Cancer Institute, the five-year relative survival rate for both bone and soft tissue sarcoma is approximately 65 percent. Sarcomas are very aggressive, and treatments are generally lacking.

Sarcomas are cancers of mesenchymal origin, like the bone or muscle. This is in contrast to carcinomas, which originate from epithelial cells, such as cancers of the skin, prostate, breast and lungs.

Jason Somarelli, PhDIn some sarcoma subtypes, its mesenchymal cells transiently acquire the phenotypic traits of epithelial cells. This is known as mesenchymal-epithelial transition (MET). Though Somarelli cautions, “these sarcomas don’t become fully epithelial. They just take on some of the characteristics we’d see in cells of an epithelial lineage.”

Combining bench experiments with theoretical modeling, the researchers found that some of the same genes that control epithelial states in carcinomas also drive the mesenchymal cells of sarcomas down the path toward a more epithelial-like state.

“Others had described what these genes individually do in epithelial cancers (carcinomas), but we were describing that these genes also act as a network together in driving sarcomas to a more epithelial-like state,” explained Somarelli. “That’s the novelty of what we did here in sarcoma.”

Somarelli said that now that they know a little bit about what those genes are doing, the crux of the team’s next project is to decipher what the phenotypes are that contribute to the lower aggressiveness of these more epithelial sarcomas: “Do they have lower rates of metastasis? Do they have lower ability to grow detached from other tissues and circulate in the blood? Do they have lower invasion? So far, we really don’t know.”

Unfortunately, at this point there is no way to intentionally manipulate that gene network, though a drug that would push the mesenchymal cells of a sarcoma tumor toward an epithelial-like state is not so far off.

Andrew John Armstrong, MD, a co-author and one of the lead investigators on the paper, said that "investigational agents that may be able to convert cells to a more epithelial and possibly less aggressive phenotype are in clinical trials now at the Duke Cancer Institute with more likely to emerge in the coming years."

With the right drug, said Somarelli, it would mean doctors could potentially more easily keep a sarcoma tumor at bay with a surgery, chemotherapy and/or radiation.

In his post-doc lab, where some of the research for the study started, Somarelli worked under Garcia-Blanco (the article’s last author). As a bench scientist, Somarelli now works closely with his mentors and collaborators Eward and Armstrong, both physicians. Eward directs the comparative oncology program of the Duke Cancer Institute and Armstrong is a medical oncologist and Associate Director for Clinical Research in Genitourinary Oncology.

Somarelli said the opportunity for Duke researchers to couple their experiments with such “great collaborators” as theoretical physicist/biophysicist Herbert Levine, PhD, the principal investigator on the study, and Levine’s graduate student Mohit Jolly, both from Rice University, was especially powerful.

“By combining experimental science with theoretical modeling, we were able to go beyond the single gene approach and better understand how these genes worked together as a regulatory system,” he said.