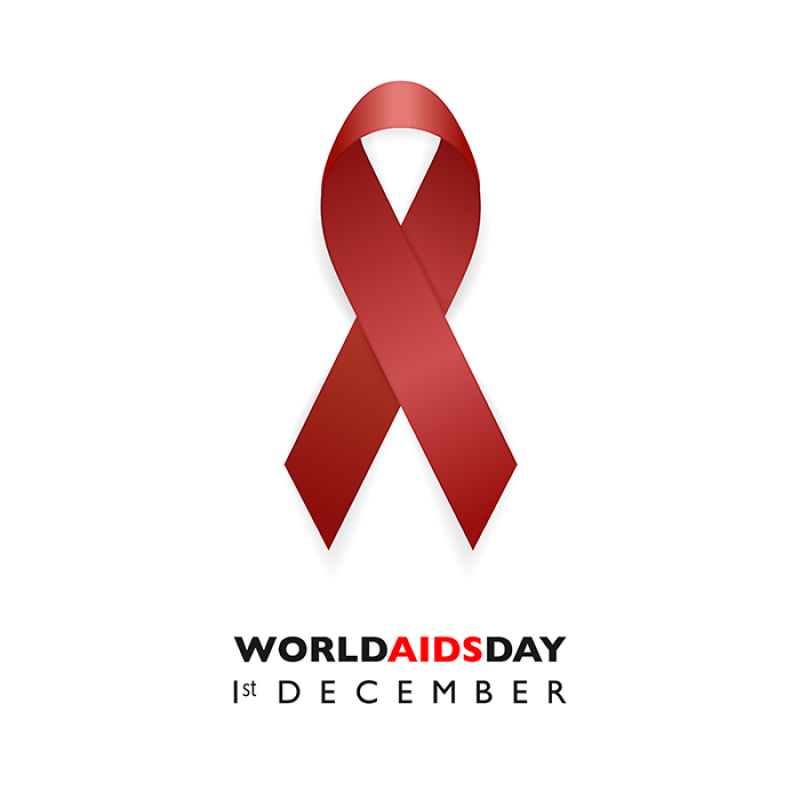 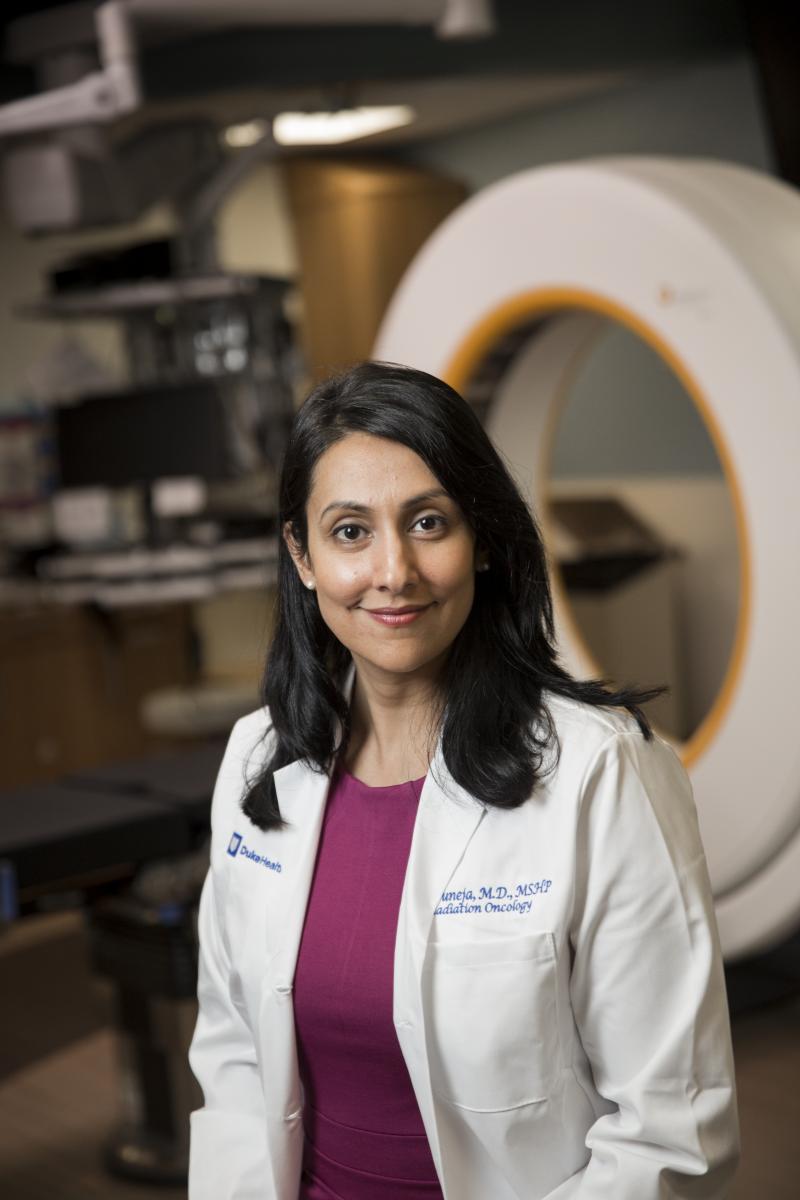 The NCI award, granted in September 2018, is designed to provide salary support and protected time to clinician-scientists early in their career.

Most of Suneja’s research is focused on disparities in cancer care access and patient outcomes; particularly in HIV-infected patients in the U.S. and Botswana.

“You can have the best cancer treatment, but when it doesn’t include certain segments of the population, that’s a problem,” she said.

Suneja’s interest in HIV in the U.S. came out of her clinical experience during her residency training at the University of Pennsylvania.

“While seeing HIV-infected cancer patients, I realized that patients with HIV were often excluded from cancer clinical trials, therefore the evidence we base our decision-making on didn’t apply to them; because of that it’s possible to undertreat or inappropriately treat these patients,” said Suneja. “If that was the case at an academic institution with access to all the available data, I wondered if these patients were undertreated in other settings across the U.S.”

She found that they were. In fact, she discovered that for most cancers, Americans living with HIV are two-to-three times more likely to receive no cancer treatment compared to uninfected people — this despite most cancer treatment courses being safe and effective in a population that’s now living much longer due to game-changing advances in antiretroviral therapy.

“Cancer survival is significantly worse in people living with HIV, in part because they frequently do not receive appropriate cancer treatment,” said Suneja. “Cancer is a leading cause of death in people with HIV, so improving cancer treatment in this population is urgent.”

A Sense of Urgency

The human immunodeficiency virus (HIV) is spread through sexual contact or blood, or from mother to child during pregnancy, childbirth or breast-feeding. Without antiretroviral therapy, it takes around ten years before the immune system is weakened to the point where someone with HIV develops AIDS—acquired immunodeficiency syndrome. Modern therapies, however, can dramatically slow the progression of the disease and hold AIDS at bay for decades. Today, most Americans with HIV don’t develop AIDS.

“There’s a perception that HIV is a fatal illness, when that’s not the reality of modern HIV medicine,” explained Suneja. “The survival rate of people living with HIV now approaches that of uninfected people. It’s really become a chronic disease.”

According to NCCN, an estimated 7,760 Americans living with HIV were diagnosed with cancer in 2010, representing an approximately 50 percent higher rate of cancer than the general population.

As people with HIV are living longer, the incidence of non-AIDS-defining cancers in this population is becoming more prevalent, according to Eric Engels, MD, MPH, chief of the Infections and Immunoepidemiology Branch in the Division of Cancer Epidemiology & Genetics at NCI and Suneja’s NCI collaborator on her K08 award.

Engels estimates that by 2030 prostate and lung cancers will be the most common cancers in people with HIV. (Smoking, a risk factor for lung cancer, is much more common in the HIV population than the general population and prostate cancer is the leading cancer diagnosed in U.S. men, overall, each year.)

After that, Suneja continued to work with Engels — looking at more states using the HIVAIDS Cancer Match Study as well as other large datasets like Medicare claims data, the National Cancer Database, and the NCI SEER (Surveillance, Epidemiology, and End Results) database. These database studies included both AIDS-defining and non-AIDS-defining cancers, including non-Hodgkin lymphoma and cervical cancer. (Because of the rarity of Kaposi’s sarcoma in uninfected people, they did not include that cancer in their treatment patterns studies.)

In 2015, Suneja, Engels and other colleagues published findings from a national survey of 500 randomly selected medical and radiation oncologists indicating that HIV-infected individuals with non-AIDS-defining cancers were less likely to receive cancer treatment compared with uninfected individuals.

Sixty-nine percent of respondents felt that “available cancer management guidelines were insufficient for the care of HIV-infected patients with cancer;” 45 percent never or rarely discussed their cancer management plan with an HIV specialist; 20 percent of providers were not comfortable discussing adverse effects cancer treatment; and 15 percent were uncomfortable discussing prognosis with their HIV-infected patients with cancer.

With her K08 grant, Gita Suneja, MD, MSHP, and her research collaborators — Eric Engels, MD, MPH; Kathryn Pollak, PhD, director of DCI’s Cancer Control and Population Sciences Research Program; and Melissa Watt, PhD, Duke Global Health Institute HIV researcher — will continue to tease out the factors that contribute to disparities in cancer care (on any and all HIV malignancies) in the HIV population, then try to remedy them.

Suneja’s primary mentor (a requirement of the K08) on the project is Duke physician and behavioral scientist Peter Ubel, MD, an expert on healthcare decision making with the Duke FUQUA School of Business. Her other mentors are John Bartlett, MD, co-director of The Center for AIDS Research and Associate Director for Research, Duke Global Health Institute; and Dawn Provenzale, MD, director of GI Outcomes Research at Duke University and the director of the Durham Epidemiologic Research and Information Center (ERIC).

Suneja and her team will conduct three different studies as part of the project.

“I envision that a physician support tool might highlight communication with the patient’s HIV specialist,” said Suneja. “Here at Duke, where we share an electronic medical record, it’s very easy to find the patient’s HIV care providers, but if they receive HIV care outside of Duke, it may not be that easy.”

Suneja doesn’t yet know what form that tool will take — whether it’s something that should be in the electronic medical record, online, or if it’s an algorithm — but noted it should be something the end user, in multiple care settings, will find most useful.

She will also continue with another study she’s leading — this one supported by the Duke Cancer Institute Cancer Control & Population Sciences research program — to assess barriers to cancer care from the patient perspective. Some of the 25 patients in the study have received treatment in the past and some have ongoing treatment. Some have had cancer treatment challenges, so they discontinued their treatment early or they never started the recommended treatment.

“So far, in this study, we’ve found that people with HIV face real barriers when they are diagnosed with cancer,” she said. “We believe there are  probably health systems factors, physician factors, and patient factors that create barriers to appropriate cancer care.”

Despite the great strides made over the past two decades, HIV is still a stigmatizing diagnosis for many who receive that news.

“It’s traumatic to get an HIV diagnosis and people relive that when they’re then diagnosed with cancer,” she said. “It can be further stigmatizing if they’re diagnosed with a cancer commonly associated with HIV.”

While HIV incidence rates in the U.S. are declining, there are pockets, Suneja said, where the disease has been making a resurgence, including the southeastern U.S. where the increase is predominantly in the MSM (men who have sex with men) population.

“The HIV population is a sector of the cancer population that’s being undertreated, so understanding what’s driving this disparity is important and timely,” she said. “We need to make sure that patients are getting the access to the care that they need and should have — throughout the U.S. and here in Durham.”

Duke has an HIV clinic, but there’s many places locally where those living with HIV can receive care. Cancer care at Duke, for this population, is managed by disease site specialists, as it is for patients who aren’t living with HIV. The CDC recommends all patients with cancer be tested for HIV.

The NCCN Guidelines for Cancer in People Living with HIV are available free of charge for non-commercial use online. They can also be viewed via the Virtual Library of NCCN Guidelines mobile app for smartphones and tablets.

Clinicians working with people living with HIV who have cancer should use clinicaltrials.gov to help patients find appropriate trials.