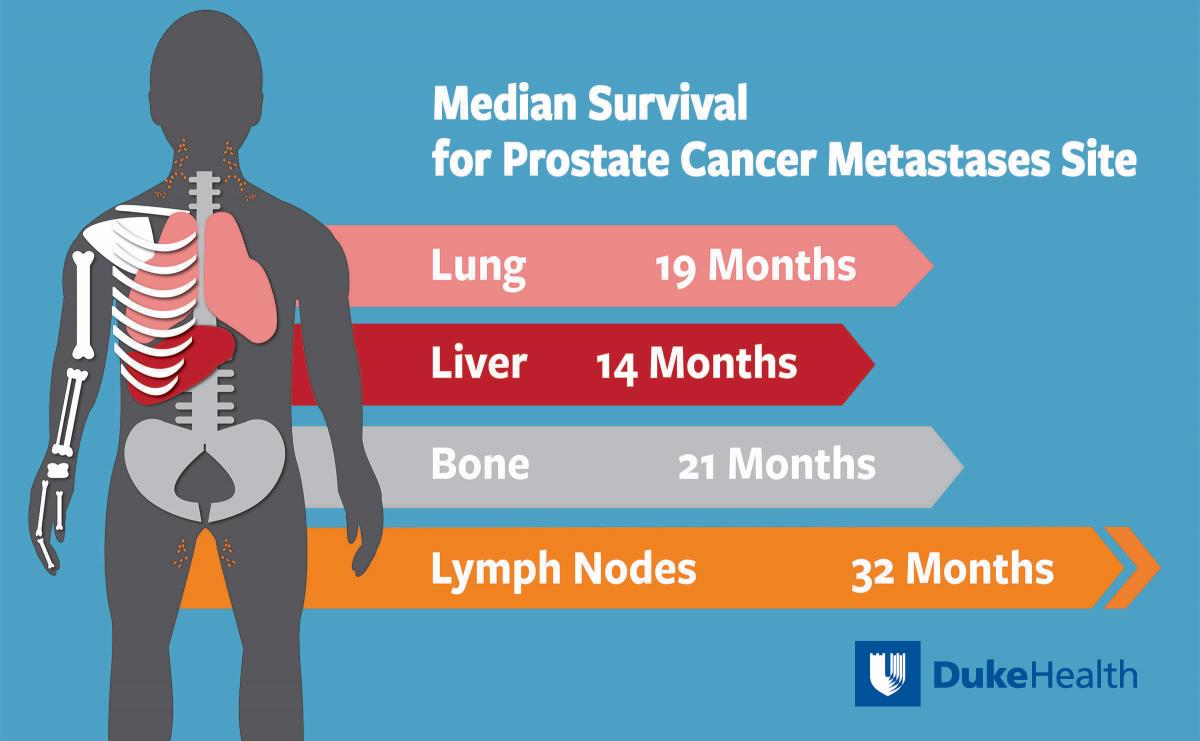 Infographic: Mark Dubowski, Duke HealthPatients with lymph-only metastasis have the longest overall survival, while those with liver involvement fare worst. Lung and bone metastasis fall in the middle.

“Smaller studies had given doctors and patients indications that the site of metastasis in prostate cancer affects survival, but prevalence rates in organ sites were small, so it was difficult to provide good guidance,” said Susan Halabi, PhD, professor of biostatistics at Duke and lead author of the study published online March 7 in the Journal of Clinical Oncology.

“With the large numbers we analyzed in our study, we were able to compare all of these different sites and provide information that could be helpful in conveying prognosis to patients,” Halabi said. “This information could also be used to help guide treatment approaches using either hormonal therapy or chemotherapy.”

Site of metastases was categorized into four groups: lung, liver (without lung), lymph nodes only, bone with or without lymph nodes and no other organ metastases.

Most patients, nearly 73 percent, had bone metastases, and their overall median survival was just over 21 months. Men with lymph involvement only were the smallest subset -- 6.4 percent -- but had the longest median survival at about 32 months.

“These results should help guide clinical decision-making for men with advanced prostate cancer,” Halabi said. “They also suggest that prognostic subgroups should be considered for investigational therapies that are tested in clinical trials.”

Halabi said more research is needed to understand how and why prostate cancer spreads to different organs.

This research received support from the National Institutes of Health (CA 155296) and the Department of Defense (W81XWH-15-1-0467). In addition, the Alliance for Clinical Trials in Oncology, AstraZeneca, Bristol-Myers Squibb, Celgene, Oncogenex, Regeneron, Sanofi, and SWOG provided data.