The Year Of The Dog 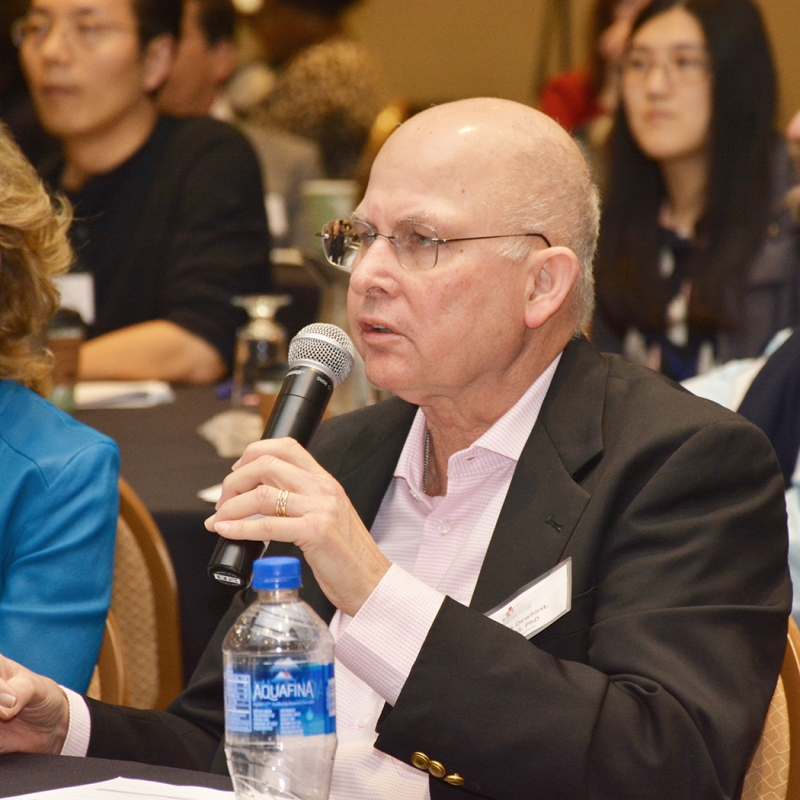 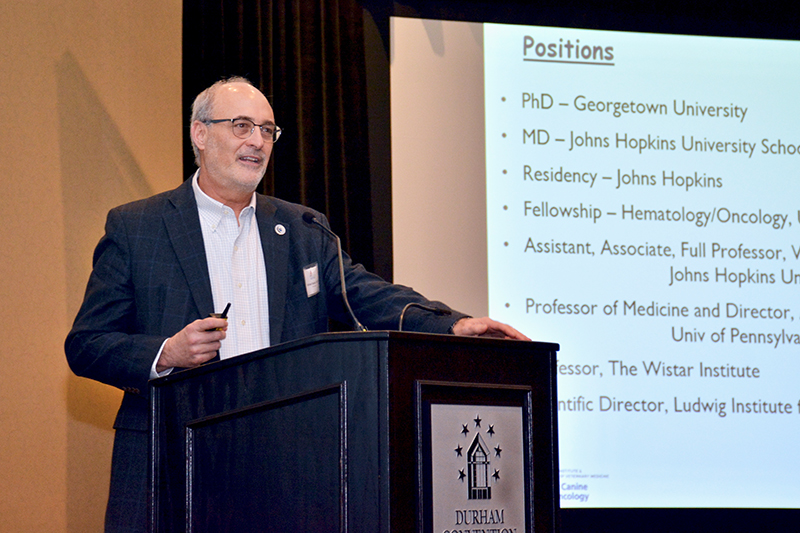 Michael B. Kastan, MD, PhD, executive director, DCI, and co-founder of the Consortium for Canine Comparative OncologyMore than one million of the 4.5 million pet dogs in the U.S. that get cancer this year will be brought to the vet by their owners for treatment. Fortunately, as new human therapies for cancer have opened up, expanded treatment options for our four-pawed friends have, too.

“Pet owners are very motivated to have their dogs in clinical trials as long as the therapy is something that they think is appropriate for the dogs,” said director of Duke Cancer Institute Michael Kastan, MD, PhD. “In the era of cytotoxic therapy it wasn’t so common to share therapies between humans and canines, but in this new era of targeted therapies and immunotherapies, there’s a real opportunity to develop drugs that benefit both patient populations.”

Kastan and colleagues at Duke Cancer Institute and North Carolina State University’s College of Veterinary Medicine saw this potential when they took steps to make their decades-long history in canine comparative oncology collaboration official — creating the Consortium for Canine Comparative Oncology (c3o). That was more than three years ago.

“It’s quite appropriate that it’s the year of the dog,” said Kastan, kicking off the symposium by referencing the fortuitous connection between this year’s Chinese zodiac animal and the topic at hand. “We’re going to really try to take full advantage of that fact in driving this collaboration and the national collaboration forward.”

As is traditional, the previous year’s c3o pilot project grantees — each with a co-principal investigator from both DCI and NC State — presented their work at the symposium.

Researchers from both institutions have worked together to advance the understanding of the biology of cancer, how cancers form, the environmental influences that lead to cancer development, and the genetic susceptibility properties that lead to tumor development in both species. Canine tumors have a lot of similarities with human tumors, much more so than do mice. 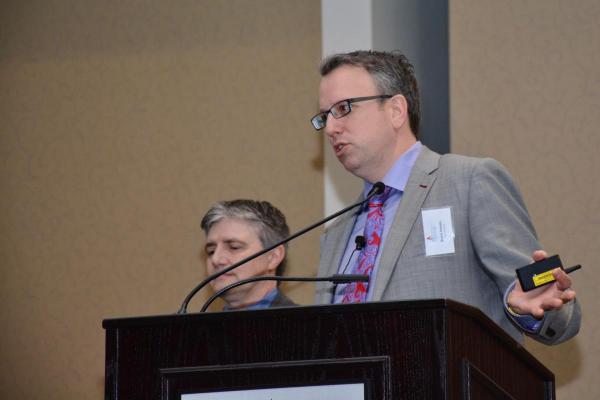 Chair of the Department of Biomedical Engineering at Duke Ashutosh Chilkoti, PhD, and NC State veterinarian Steven Suter, VMD, MS, PhD, benefited from two successive grants from the consortium (in 2016 and 2017) for pilot projects by their group testing a new formulation (CP-DOX) of an old chemotherapy drug (doxorubicin) for treating dogs with high-grade B-cell lymphoma. They were the first to present their latest work.

Their team is in the process of testing more than 100 FDA-approved cancer drugs on human and canine cell lines and conducting cross-species genomic analysis, and have so far identified several potential new therapies.

“We very much appreciate the support of the C3O and the V Foundation for keeping this pipeline going,” said Eward, giving thanks for two years of project funding. “This pipeline has continued to grow stronger and stronger. We’re getting more and more collaborators both in private practice and in academic veterinary medicine who are enrolling patients and sending tissue.”

Duke gastrointestinal oncologist Shiaowen David Hsu, MD, PhD, presented what he and co-PI veterinarian Jennifer Luff, VMD, PhD (NC State) learned in the course of their project investigating the dog as a preclinical model for melanoma therapy by targeting the long non-coding RNA SAMMSON, which appears to be important in the tumorigenesis of dog melanoma.

Surgical oncologist Brant Inman, MD, who specializes in bladder cancer in both his practice and his research, and NC State’s Breen gave a status update on their group’s comparative analysis of the impact of BRAF mutations in bladder cancer in dogs and people and whether and to what extent it’s a marker of advancing disease.

Duke radiation oncology researcher Xiaofeng Steve Zhang, PhD, and NC State veterinary radiology researcher Hiroto Yoshikawa, DVM, PhD, explained their work on image cycling hypoxia in canine tumors during radiotherapy dosing. While tumor hypoxia (deprivation of oxygen) leads to increased resistance to radiotherapy, they explained how it could be a promising target for a number of tumor-selective therapies. 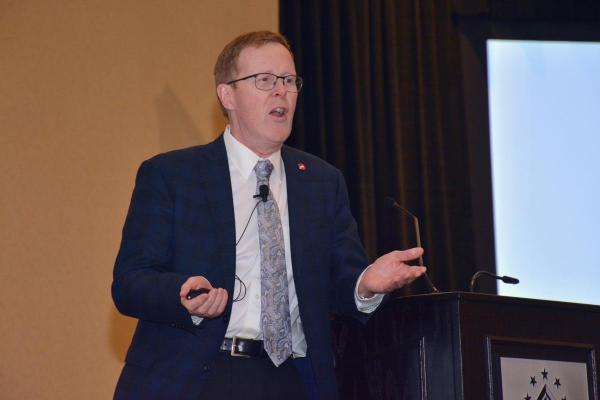 Paul Lunn, BVSc, MS, PhD, MRCVS, co-founder of the Consortium for Canine Comparative Oncology and dean of the College of Veterinary Medicine at NC State Four trainees, two each from NC State and Duke, were awarded top honors for their research posters. They each gave a seven-minute presentation on their research.

“One of the nicest things I’ve found, as my hair has got greyer, is being able to look at the increased quality of trainees that we have every year that come through both institutions,” said NC State's Breen, introducing the young researchers.

S. B. DeWitt (Duke) was awarded for her team’s work on ATRX mutations and their effect on osteosarcoma tumor initiation, growth, and progression.

Paige S. Nemec (NC State) was recognized for her group’s work characterizing the binding preferences of the prevalent Boxer Dog Leukocyte Antigen (DLA)-88*034:01 allele carried by 82 percent of Boxers — an inbred breed with an increased risk for glioma and lymphoma. The project was funded by a grant from the American Kennel Club Canine Health Foundation,

Gireesh B. Reddy (Duke) was named for his team’s work utilizing a novel form of niclosamide to treat metastatic osteosarcoma, the most common primary bone malignancy in children and dogs, which has seen relatively few therapeutic advances in the past three decades.

While the symposium was solidly grounded in the homegrown research of Duke Cancer Institute and NC State, it  had a national flavor. Guest speakers from the National Cancer Institute, Colorado State University, the University of Pennsylvania, the Ludwig Institute for Cancer Research, were given the floor in a two-hour mid-morning session titled “Pushing Forward in Comparative Oncology: Stories from the Frontier,” with such themes as the pitfalls and potential of limb salvage in the age of regenerative medicine, comparative immuno-oncology, the first CAR T-cell (chimeric antigen receptor) therapy canine clinical trial, and insights into circadian biology and tumorigenesis.

Deputy director of the National Cancer Institute’s Division of Cancer Treatment and Diagnosis Toby Hecht, PhD, made the case for “why immunologists love dogs” as opposed to mouse models, as part of her address to the symposium on “Comparative Immuno-oncology in the Precision Medicine and Cancer Moonshot Era: The NCI Perspective.” 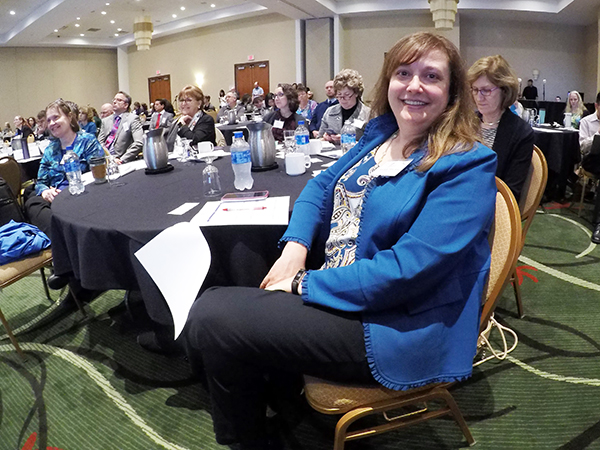 “Genetically engineered mouse models do not in general, replicate the genetic complexity of the human tumor, including its heterogeneity,” said Hecht, “and are deficient in assessing the response to immunotherapy agents for humans.”

She explained that canine tumors are complex in terms of their heterogeneity, their relationship to the tumor microenvironment, and the development of resistance to treatment that’s closely related to cancers in humans. Other reasons that make dogs good candidates for immunotherapy or targeted therapy, she said, are that they are immunocompetent (relatively outbred compared with lab animals, though some have grater susceptibility to certain forms of cancer) and that they have few standards of care, so investigational agents can be considered even in early or minimal residual disease states.

Chi Van Dang, MD, PhD, scientific director for the Ludwig Institute for Cancer Research, educated symposium-goers, in his closing keynote speech, about another new area in cancer research — the importance of cancer metabolism, including how circadian biology plays an important role in tumorigenesis. This included showing data on how the disruption of the circadian rhythm might increase the incidence of cancer.

“For many years, when we first started studying cancer metabolism, most of the community believed that metabolism is just along for the ride, that cancer oncogenes and tumor suppressors drive many of the hallmarks of cancer, primarily through regulating the cell cycle,” said Van Dang. “The reason for that was because the complexity of the metabolic map scared a lot of microbiologists away.”

But not Van Dang, a scientist who Kastan called “a national leader in this burgeoning field of cancer metabolism.”

Van Dang’s research into the molecular signaling pathways and mechanisms that govern the metabolism of cancer cells has implications for both humans and canines. As noted on his research page, his recent body of work “bolstered the hypothesis that cancer cells can become addicted to their reengineered metabolic signaling and that disrupting these pathways could be a powerful approach to treating cancer.”

Cancer research and treatment for human patients over the past decades, Kastan said, has come a long way as treatment has moved from non-selective highly cytotoxic therapies to more selective direct therapies or immunotherapies that “hit the Achilles heals of tumor cells.” However, as he explained, bringing new drugs to market remains costly — about $1.8 billion — and takes several years.

“We’re hoping as we grow into a real national consortium, that we’re going to be able to provide infrastructure that allows pharma and biotech to think about these partnerships as a way to test drugs and develop them in a much more efficient and cost effective manner,” said Kastan. “We are very excited about how far we’ve come.”