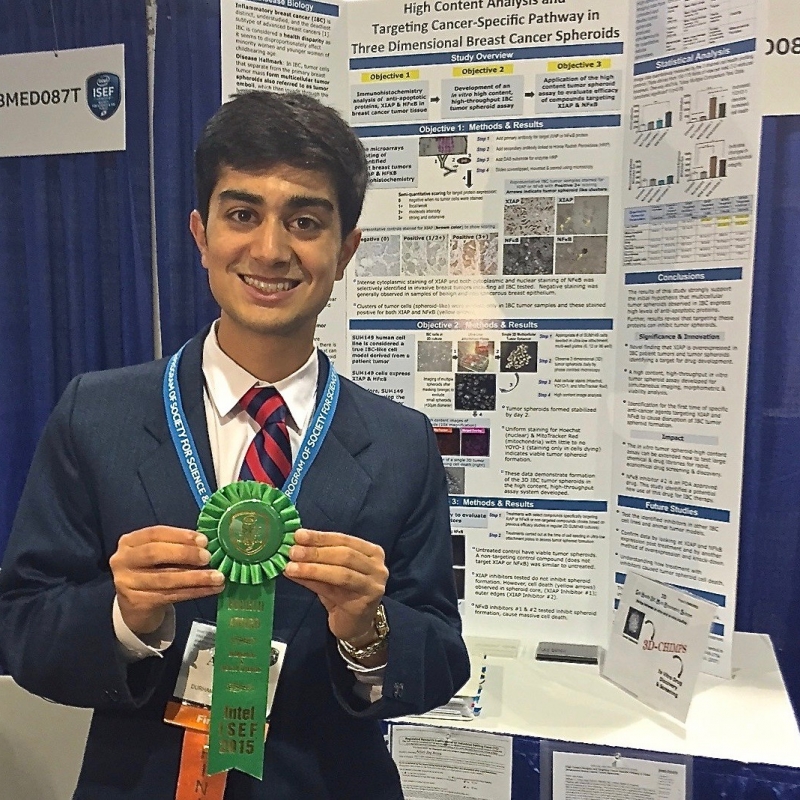 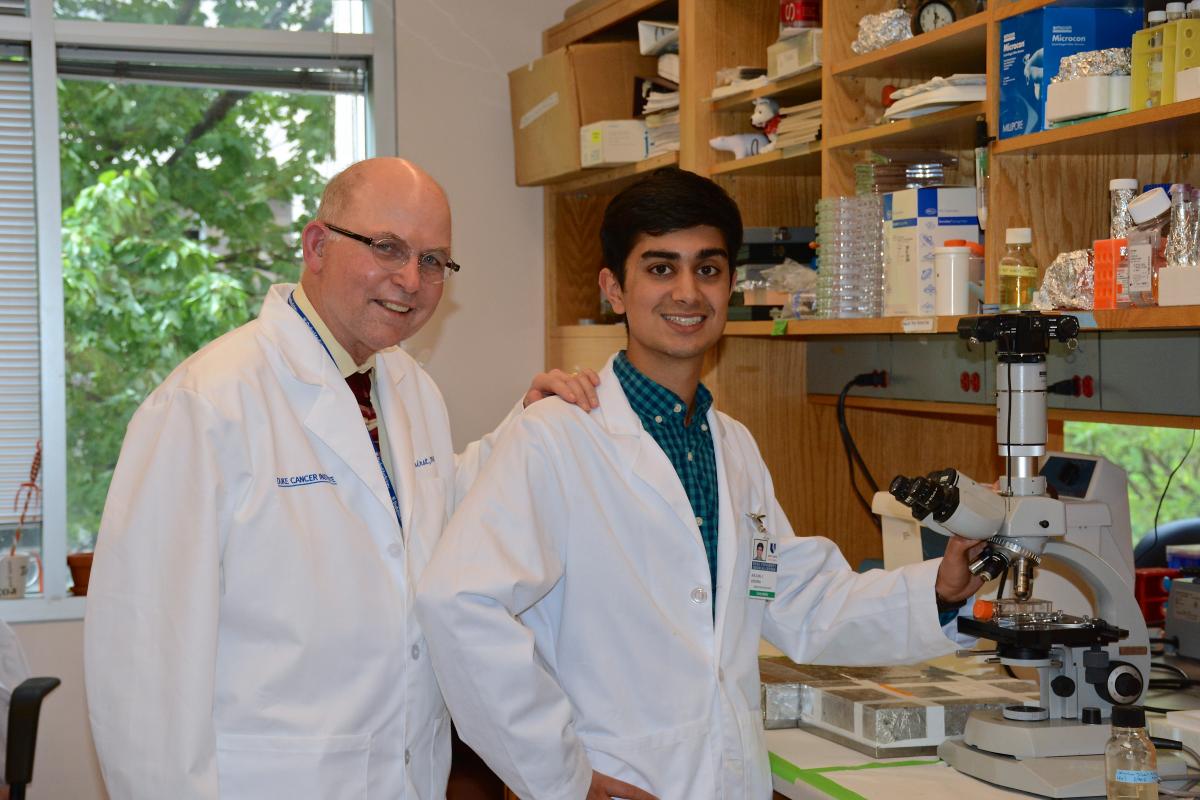 Arjun Arora, 17, poses with his mentor Mark Dewhirst, DVM, PhD. Arora, who recently one a fourth place prize at the Intel International Science and Engineering Fair, has worked as intern in the Dewhirst lab for the better part of the past school year.Arjun Arora isn’t an average 17-year-old kid. While many of his peers may be engaged in typical extra curricula activity – watching television, texting friends, playing computer games or prepping for prom – Arjun Arora is in the lab – a Duke Cancer Institute research lab.

“I initially started at Duke last year as a student in a Duke Clinical Observership Program under the mentorship of Dr. Michael Morse in the Gastroenterology Cancer Clinic,” said Arora, the son of Gayathri Devi, PhD, an associate professor in the Departments of Surgery and Pathology. “Working with Dr. Morse, I developed an interest in cancer metastasis and, as a result, I decided I wanted to look into research.”

Arora went on to begin a summer high school research internship under the direction of Mark Dewhirst, DVM, PhD, Gustavo S. Montana Professor of Radiation Oncology, SoM, and vice director for Basic Sciences for the DCI.

“My research focuses on breast cancer,” said Arora, a junior at William G. Enloe High School in Raleigh. “It’s a disease that has personal significance to me as it has taken someone very dear who, in spite of being cured of the primary breast tumor, developed brain metastasis. This internship has provided me with the opportunity to meet and interact with many people at Duke. Their depth of knowledge and compassion seems endless – not to mention their tolerance in accommodating a high school student like me.”

In April, as part of the AACR Special Program for High School Students, Arora attended the AACR Annual meeting where he was invited to present his poster in the special session: The Conquest of Cancer and the Next Generation of Cancer Researchers.

“I had an amazing time,” the teen shared. “It is incredible to see the advances in cancer research and the vastness of the meeting in general.”

During his time in Dewhirst’s lab, Arora zeroed in on inflammatory breast cancer (IBC), a deadly subtype of breast cancer that disproportionately affects younger women during their childbearing years.

“A major problem stemming from the disease is that as tumor cells separate from the primary tumor, they form clusters of tumor cells known as tumor spheroids,” explained Arora. “Current treatment methods are unable to halt these tumor spheroids from forming and spreading throughout the body through metastasis.” 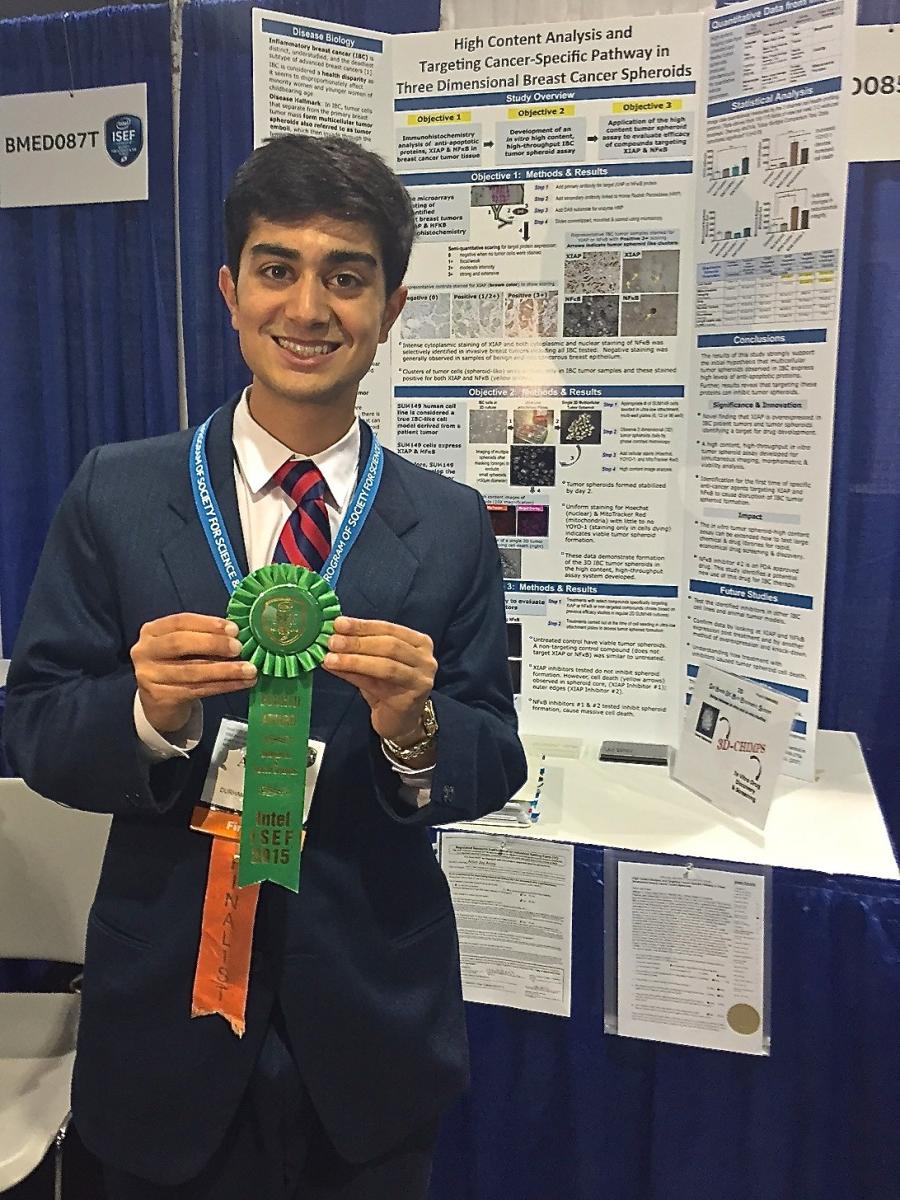 Arjun Arora poses with his Fourth Place ribbon at the Intel International Science and Engineering Fair, which was held at the David L. Lawrence Convention Center in Pittsburgh, Pennsylvania, May 10 through May 15. Arora plans to return to Duke in the fall to again intern under the direction of Mark Dewhirst, DVM, PhD.Arora’s research has helped to develop a method for testing susceptibility of lab-created three-dimensional inflammatory breast spheroids to existing or new anti-cancer drugs. He has also been able to confirm the roles two different proteins play in IBC.

“This knowledge could help to narrow the search for new and better treatment options,” he said.

Arora, who earlier in the spring was named a 2015 finalist by Intel ISEF, competed in the Intel International Science and Engineering Fair held at the David L. Lawrence Convention Center in Pittsburgh, Pennsylvania, May 10 through May 15. Arora was one of 1,700 students selected from more than 70 countries, regions and territories, participating in this year’s fair. Students were given the opportunity to showcase their independent research and compete for approximately $4 million in prizes.

Winners were announced on Thursday, May 15, and Arora was awarded Fourth Place in the Biomedical and Health Sciences category, earning him a $500 prize and a great deal of encouragement and motivation to follow his dreams.

“When Arjun first started with us, he came into the lab, read the manual, ran the machine and reported back to me,” recounted Dewhirst. “It was all a bit perfunctory. I encouraged Arjun to dig in – understand the process and employ critical analysis. Almost immediately, I saw a light come on, so to speak. Over the weeks that followed we began to notice a swagger in this young man’s step, confidence in his analysis and, most importantly, a genuine passion for his work.”

Arora, also an award-winning poet and musician, hopes to pursue an undergraduate degree at Duke University after high school graduation in June 2016.

“I’ve grown up in Duke’s backyard,” he said. “Having conducted research at Duke it’s become one of my dream schools. I’d like to pursue biomedical sciences. Perhaps I will be able to pair those studies with public policy, which would then enable me to put to use my passion for writing. I am truly grateful for Dr. Dewhirst’s support, mentorship and inspiration. My experiences this year have exceeded anything I could have imagined.”

Arora will continue his breast cancer-focused research under the mentorship of Dewhirst into his senior year.