Our research interests focus on the control of cell polarity.  Cell polarity is a nearly universal feature of eukaryotic cells. A polarized cell usually has a single, clear axis of asymmetry: a “front” and a “back”.  In the past several years it has become apparent that the highly conserved Rho-family GTPase Cdc42, first discovered in yeast, is a component of a master pathway, employed time and again to promote polarity in different contexts.

Most cells know which way to polarize.  Concentration gradients of attractants, repellents, nutrients, or pheromones reveal the optimal directions for successful attack, escape, feeding, or mating. However, cells can and do polarize even when deprived of directional cues, choosing a random axis and committing to it as if they knew where they were going.  This process, called "symmetry breaking", reflects the presence of a core internal polarity program.  Our work has uncovered the biochemical basis for this core program, which uses positive feedback loops to reinforce inequalities in the local concentrations of polarity factors, so that stochastic fluctuations are amplified into a single dominating asymmetry.

We use the tractable budding yeast as a model system.  Because the genes and processes we study are highly conserved, we anticipate that learning the answers to fundamental questions in yeast will be relevant and informative for a wide range of organisms.  Our work combines molecular genetics, cell biology, and mathematical modeling, and addresses questions including:

James B. Duke Distinguished Professor of Pharmacology and Cancer Biology

Professor in Molecular Genetics and Microbiology

Program to Support Student Development and Diversity in Duke Biosciences

Mechanisms of cell fusion during mating in Saccharomyces cerevisiae

Mechanism of commitment to a mating partner in Saccharomyces cerevisiae.

Many cells detect and follow gradients of chemical signals to perform their functions. Yeast cells use gradients of extracellular pheromones to locate mating partners, providing a tractable model for understanding how cells decode the spatial information in gradients. To mate, yeast cells must orient polarity toward the mating partner. Polarity sites are mobile, exploring the cell cortex until they reach the proper position, where they stop moving and "commit" to the partner. A simple model to explain commitment posits that a high concentration of pheromone is detected only upon alignment of partner cells' polarity sites and causes polarity site movement to stop. Here we explore how yeast cells respond to partners that make different amounts of pheromone. Commitment was surprisingly robust to various pheromone levels, ruling out the simple model. We also tested whether adaptive pathways were responsible for the robustness of commitment, but our results show that cells lacking those pathways were still able to accommodate changes in pheromone. To explain this robustness, we suggest that the steep pheromone gradients near each mating partner's polarity site trap the polarity site in place.
Authors
Jacobs, KC; Gorman, O; Lew, DJ
MLA Citation
Jacobs, Katherine C., et al. “Mechanism of commitment to a mating partner in Saccharomyces cerevisiae.” Mol Biol Cell, vol. 33, no. 12, Oct. 2022, p. ar112. Pubmed, doi:10.1091/mbc.E22-02-0043.
URI
https://scholars.duke.edu/individual/pub1532260
PMID
35947501
Source
pubmed
Published In
Molecular Biology of the Cell
Volume
33
Published Date
2022
Start Page
ar112
DOI
10.1091/mbc.E22-02-0043

Cells' ability to track chemical gradients is integral to many biological phenomena, including fertilization, development, accessing nutrients, and combating infection. Mating of the yeast Saccharomyces cerevisiae provides a tractable model to understand how cells interpret the spatial information in chemical gradients. Mating yeast of the two different mating types secrete distinct peptide pheromones, called a-factor and α-factor, to communicate with potential partners. Spatial gradients of pheromones are decoded to guide mobile polarity sites so that polarity sites in mating partners align towards each other, as a prerequisite for cell-cell fusion and zygote formation. In ascomycetes including S. cerevisiae, one pheromone is prenylated (a-factor) while the other is not (α-factor). The difference in physical properties between the pheromones, combined with associated differences in mechanisms of secretion and extracellular pheromone metabolism, suggested that the pheromones might differ in the spatial information that they convey to potential mating partners. However, as mating appears to be isogamous in this species, it is not clear why any such signaling difference would be advantageous. Here we report assays that directly track movement of the polarity site in each partner as a way to understand the spatial information conveyed by each pheromone. Our findings suggest that both pheromones convey very similar information. We speculate that the different pheromones were advantageous in ancestral species with asymmetric mating systems and may represent an evolutionary vestige in yeasts that mate isogamously.
Authors
Jacobs, KC; Lew, DJ
MLA Citation
Jacobs, Katherine C., and Daniel J. Lew. “Pheromone Guidance of Polarity Site Movement in Yeast.” Biomolecules, vol. 12, no. 4, Mar. 2022. Pubmed, doi:10.3390/biom12040502.
URI
https://scholars.duke.edu/individual/pub1515388
PMID
35454091
Source
pubmed
Published In
Biomolecules
Volume
12
Published Date
2022
DOI
10.3390/biom12040502 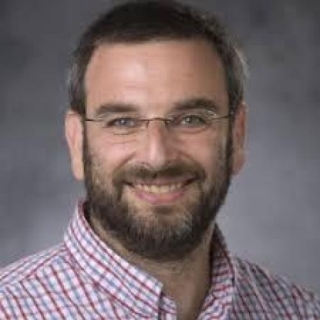 James B. Duke Distinguished Professor of Pharmacology and Cancer Biology