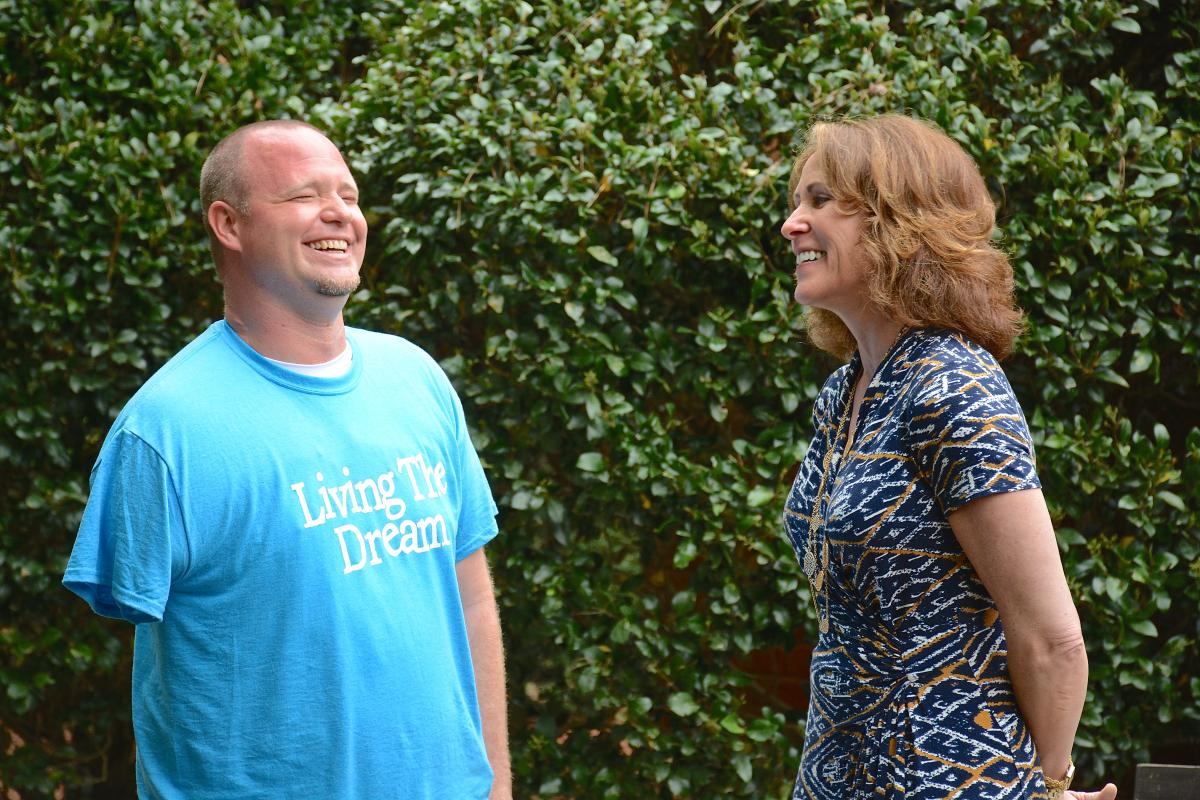 Always upbeat, Brandon Lail, who in May 2014 lost his right arm to chondrosarcoma, shares a laugh with Kelly Mulhern, operations manager at Caring House. Caring House is a local non-profit organization providing supportive and affordable housing for adult patients receiving treatment at Duke Cancer Institute. Lail is a regular at Caring House, visiting every three months when he comes to Duke for check-ups.Brandon Lail, 32, is known for his upbeat approach to life. Nothing much can get him down. However, when cancer took his entire right arm and shoulder, the blow was almost too much to bear.

“I’ve always been known for my ability to bounce back from difficulty,” said Lail, who resides in Hickory, North Carolina. “But after being told I had to have both my arm and shoulder amputated, I wasn’t sure what was left of my life.”

Lail first noticed a knot in his right bicep in the spring of 2012. Initially, his doctor didn’t think it was anything serious. Eventually, however, in February 2013 Lail was referred to a surgeon to have the “knot” removed.

“Once he got in there, he soon realized something much more serious was going on,” Lail remembered.

The surgeon found additional tumors in the cartilage between Lail’s shoulder and arm. A biopsy came back positive. In March 2013, Lail was diagnosed with chondrosarcoma.

Chondrosarcoma, or literally “cartilage tumor,” is a rare type of cancer that grows in the cartilage between joints. Usually appearing in adults 40 years old or older, tumors can range from safer, low-grade tumors with low metastatic potential to extremely dangerous, aggressive tumors that spread rapidly.

Over the next several months, Lail had three additional surgeries to remove tumors, but each time the tumors returned. It was clear he had an aggressive form of the disease. In early 2014 Lail was referred to the Duke Cancer Institute for yet another opinion. After performing an MRI of his entire right side, orthopaedic oncology surgeon Will Eward, MD, DVM, found the cancer had metastasized to Lail’s right lung.

Because chondrosarcoma rarely responds to chemotherapy or radiation, amputation was his only option. In May 2014, Lail lost his arm, along with his shoulder blade and clavicle. Thoracic surgeon Thomas D’Amico, MD, also removed three nodules from Lail’s lung. 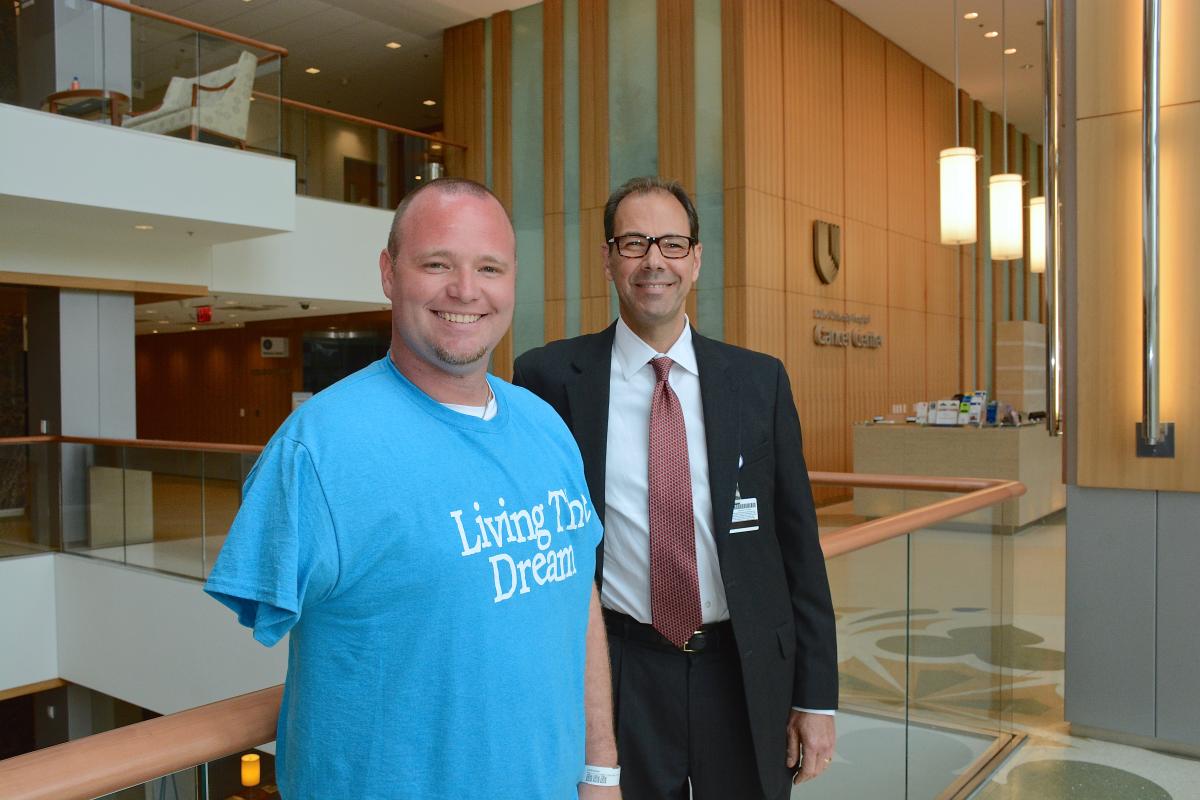 During a recent visit to the Duke Cancer Center Lail meets with thoracic surgeon Thomas D’Amico, MD. “If “it weren’t for Dr. Eward and Dr. D’Amico discovering cancer in my lung, I might not be here today,” Lail said.“At first I fell into a deep depression,” recounted Lail with a furrowed brow. “Fortunately, I was surrounded by great people who allowed me to vent but who were also always ready to reassure and encourage me. They expressed empathy. They allowed me to wring out the nasty and waited patiently as I was filled with something fresh, new and resilient.”

The grieving took time, but little by little Lail began to rebound. He rededicated his life to God and surrounded himself with positive people willing to “speak truth in love.”

“From the time I was a child, I believed in God,” Lail said. “But in all actuality it was a faith that hadn’t really ever been tested. It’s when our faith is tested that the true soul searching begins. At some point I began to realize that I was not alone; I would not fight this battle by myself. With that realization, a transformation took place. Rather than feel sorry for myself, I was becoming grateful – grateful for life, second chances and new beginnings.”

As one would expect Lail has found support and encouragement from his girlfriend, family and friends, his co-workers at Shurtape Technologies and his church family at the Church of Christ in Mountain View, North Carolina. 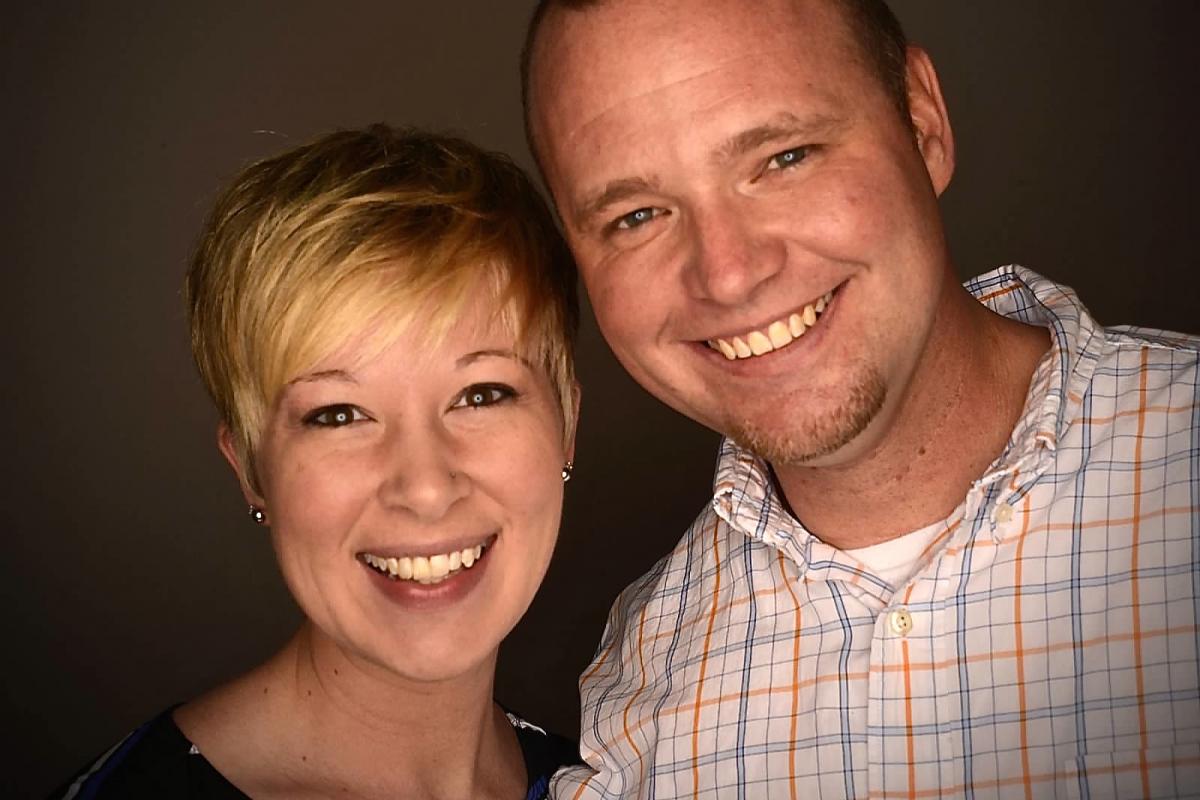 Lail with his longtime girlfriend, Jordan Smith. The couple was photographed at a Caring House charity event. Photo courtesy of Sam Girton.Every three months Lail meets with his team of clinicians at Duke. He undergoes scans of his lung and meets with his cancer specialists to ensure his cancer continues to remain at bay.

“I am so fortunate to be alive,” said Lail, his smile broadening. “My first team of specialists did not realize my cancer had metastasized. If it weren’t for Dr. Eward and Dr. D’Amico discovering cancer in my lung, I might not be here today.”

Lail isn’t out of the woods yet, however. In April scans indicated the possibility of cancer returning in his right lung. It’s too early to tell. Lail, ever the optimist, remains buoyant trusting that what’s meant to be, will be.

“It’s a win-win situation,” said Lail, who plans to marry his longtime girlfriend when his life becomes a little more stable. “No matter what happens – whether I get more time here on earth, or should my life here be cut short – I know God is in control and is watching out for me.”