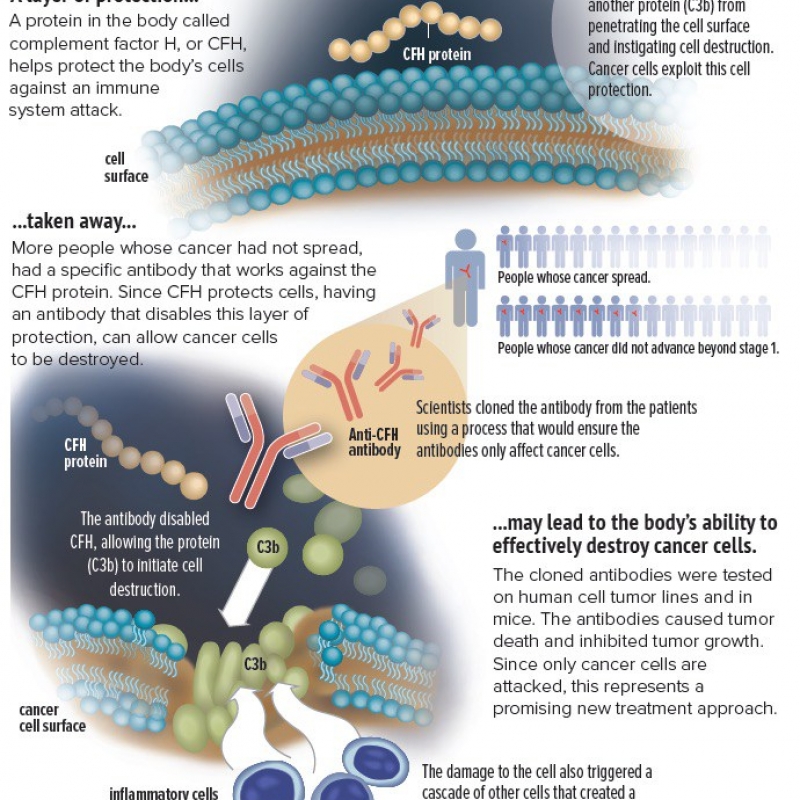 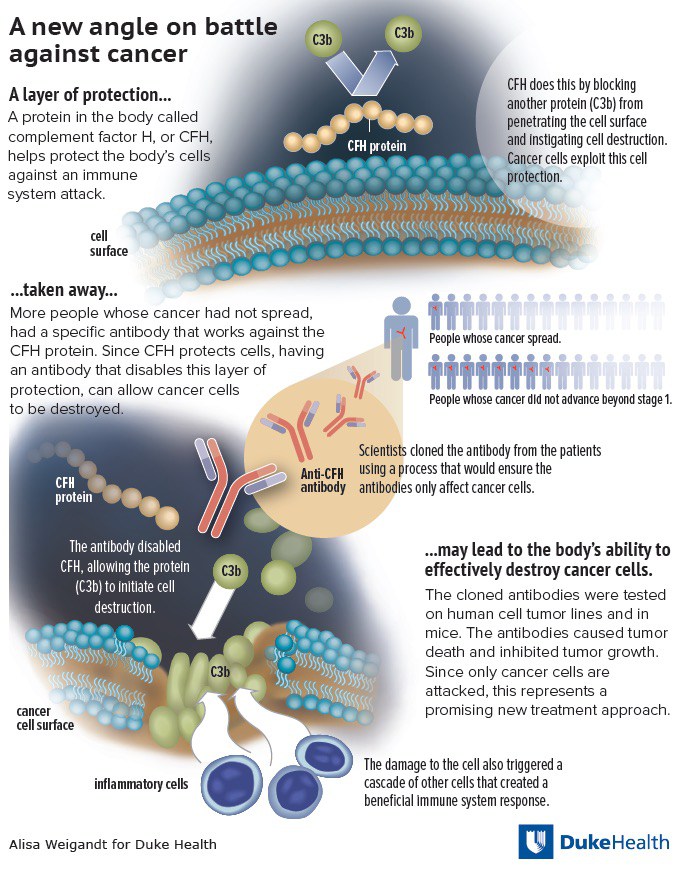 A research team from Duke Health has developed an antibody from the body’s own immune system that preferentially attacks cancer cells.

The antibody works by targeting a natural defense mechanism that cancer tumors exploit.

Cells in the body essentially use a home security system that relies on certain proteins to protect the cell surface and keep it safe. These proteins help the cell avoid injury and even death from unwanted activation of the immune system.

In a paper published online May 5 in Cell Reports, the Duke team describes the workings of a cancer-fighting antibody they discovered, developed and tested in cell lines and animal models. The antibody dismantles a specific part of a cancer cell’s defense system and then employs several mechanisms of attack.

"This is the first completely human-derived antibody developed as an anti-cancer therapy, which is very different from other immunotherapy approaches,” said senior author Edward F. Patz, Jr., MD, the James and Alice Chen Professor of Radiology and professor in the Department of Pharmacology and Cancer Biology at Duke.

Patz and colleagues -- including principals from the Duke Human Vaccine Institute who have been advancing the development of antibodies for an HIV vaccine -- started with the observation that some lung cancer patients have early-stage tumors that never progress to advanced disease.

One of the features that separated these patients from those who had more lethal tumors was the presence of antibodies against a protein called complement factor H, or CFH, which protects cells from an immune system attack.

CFH works by preventing activation of an important immune response. It inhibits the deposit of a complement C3b protein on the cell surface. Complement C3b initiates the degradation of the cell membrane, which eventually leads to cell death.

Once the antibody for CFH was identified, Patz and colleagues sought to explore how this immune response could be optimized as a cancer therapy. Critical to that effort was finding a way to produce antibodies that recognized the exact same part of CFH as the autoantibodies made by the early-stage cancer patients, thus assuring that the antibodies would have a particular affinity for cancer cells.

Patz and colleagues pooled the white blood cells from CFH antibody-producing cancer patients and then isolated and cloned the antibody genes from single immune cells that make the specific antibodies.

This was an efficient process that enabled the researchers to produce mature antibodies that recognized the same region of CFH targeted by the original patient’s immune systems -- therefore leading to the attack of cancer cells, not healthy cells.

The researchers then tested the antibodies in multiple cancer cell lines, including lung, gastric and breast cancers in lab dishes, and in tumors in living mice. They found that the antibodies caused tumor cell death without any obvious side effects. The antibodies also appeared to trigger an additional adaptive immune response when the damaged cells sent signals to recruit an army of lymphocytes, creating a potentially more lethal systemic attack.

“We believe it might be this additional cellular response that could potentially have the most profound impact on cancer outcomes long-term,” Patz said, noting that further tests would be required to understand the full potential of the approach.

“This could represent a whole new approach to treating cancer, and it’s exciting because the antibody selectively kills tumor cells, so we don’t have significant side effects to achieve tumor control,” Patz said. “We believe we can modulate the immune response and let the body’s own immune system take over to either kill the tumor or keep it from growing.”

The study received funding from the LUNGevity Foundation, the Department of Defense (W81XWH-13-1-0189), the National Institutes of Health (UL1TR001117), and the Duke Translational Research Institute.