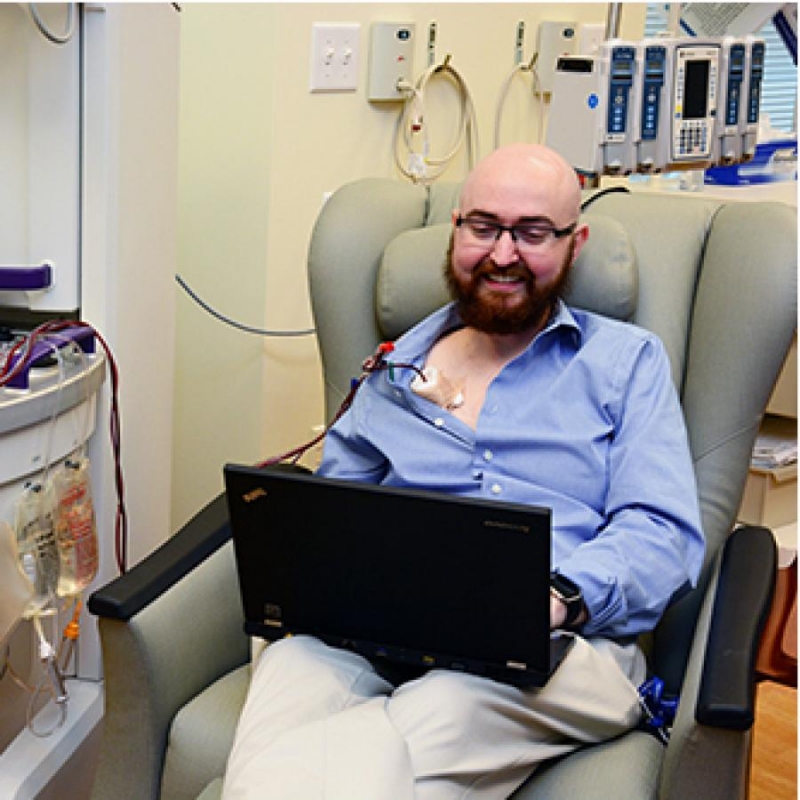 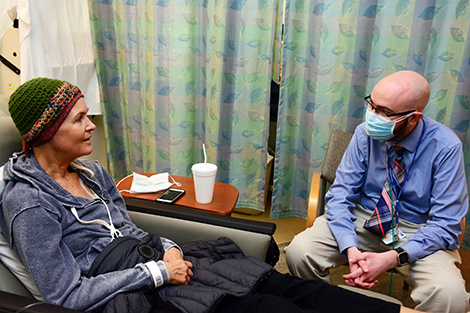 Following kidney failure, Barbara Boros, 58, came to Duke from Santa Barbara, for a kidney transplant and bone marrow transplant; both from the same donor. It was a unique procedure, a trial that only 37 patients across the U.S. had the opportunity to take part in. “You don’t know how grateful I am every day that I got in on this,” she said. “Matt told me what to expect and was very helpful.”At their annual meeting last month, the Blood and Marrow Transplant Clinical Trials Network (BMT CTN) presented the “Blood Marrow & Transplant Clinical Trials Network Coordinator of the Year Award" to Matt Williamson, BSN, RN, a clinical research nurse coordinator for Duke Medical Center’s Adult Blood & Marrow Transplant Program (ABMT).

A cancer survivor who is a bone marrow transplant recipient himself, Williamson said the “unexpected” award was both “humbling” and deeply personal.

“I’ve never worked with a team of people that personify excellence more than the blood and marrow transplant teams — and I get to say that from ‘both sides of the bed',” he said, after accepting the award. “I may have accepted the plaque, but this award belongs to all of us.”

Duke is one of 18 core centers of the BMT CTN, an NIH-supported cooperative group that conducts multi-center phase II and phase III studies. Williamson coordinates the protocols for all the BMT CTN clinical trials that are run through the ABMT program at Duke; screening incoming patients to see if they are eligible for placement on a trial, explaining what it will involve, and often seeing patients through to the end of the trial.

“Matt is well liked by both his colleagues and his patients, and he is a credit to our program,” said director of the ABMT program Mitchell E. Horwitz, MD. “We are all very proud of him for receiving this well- deserved recognition of his hard work.”

Horwitz noted that Matt stood out for his detailed review of new and ongoing protocols, for troubleshooting problems and obstacles for national accrual, and for his participation in both local and national efforts for protocol management.

“Since joining the program 18 months ago, we have seen tremendous growth in protocol participation within the adult BMT program at Duke,” he said. “Matt and his colleague Ryan Virgil take primary responsibility for this increased activity.” 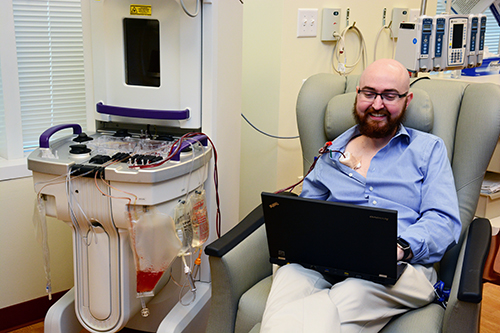 Even while undergoing specialized treatment (photopheresis) for a bone marrow transplant complication, clinical trial coordinator Matt Williamson, RN, BSN, — with Duke’s Adult Blood & Marrow Transplant Program — is hard at work at his laptop. “To have the chance to help fight the fight against disease is such an amazing opportunity and I’m extremely grateful to be a part of that fight here at Duke,” he said. Williamson takes pride in being able to use his personal experience to put patients at ease and help them access trials.

“When you as a patient are in the room for the first time learning that you need a bone marrow transplant, it’s a pretty major thing to hear,” he said. “It’s life changing. A lot to swallow. Very scary. Knowing that somebody else has done this can be reassuring.”

Williamson, now 29, was 15 years old when he was diagnosed with stage III Hodgkin Lymphoma. After achieving complete remission and finishing high school, the Burlington, North Carolina, native enrolled at the University of North Carolina at Greensboro with plans to study music. However, at age 18, when his disease relapsed, he came to Duke to receive an autologous bone marrow transplant. After recovering from that transplant, he returned to UNCG — this time to pursue nursing instead of music.

He obtained his Certified Nursing Assistant license and was grateful when he got the opportunity to join Unit 5200 while he continued to work on his degree.

“This meant the world to me; how many transplant patients get the opportunity to care for others in the same place in which they were once treated?” said Williamson.

Unfortunately, the lymphoma returned in 2009 for the third time, forcing him to withdraw from college to receive chemotherapy and a second bone marrow transplant — this time from a matched unrelated donor.

Williamson worked what he thought would be his last shift on Unit 5200, “knowing the next time I would walk those halls it would be as a patient again.”

After recovering from the second transplant, he was able to return to UNCG and complete his Bachelor of Science degree in Nursing in 2012.  The next fall, he married his “best friend and most beloved,” Angela.

Once he received his nursing license in the summer of 2012, Williamson was happy to return to work with the Pediatric Blood & Marrow Transplant Team — this time as an RN.

“Unit 5200 had become my home, and the staff members who had seen me through the hardest parts of my life had become my family!” said Williamson. “Working with these nurses at Duke played a major role in laying the foundation for my professional development.”

Williamson continued: “To be in a position, now, that helps advance scientific discovery towards better treatment for our patients, and a better life for them in the future, is one of the most exciting things I could ever imagine doing.”

Williamson continues to navigate uncertainty. He has recently developed a lung complication resulting from his 2009 transplant. It appears to be Graft-vs-Host disease.

Even so, Williamson remains buoyed and hopeful. He continues to care for his patients while his specialists take care of him. To congratulate Williamson on his recent award and to send well wishes, please email him at matthew.williamson@duke.edu.