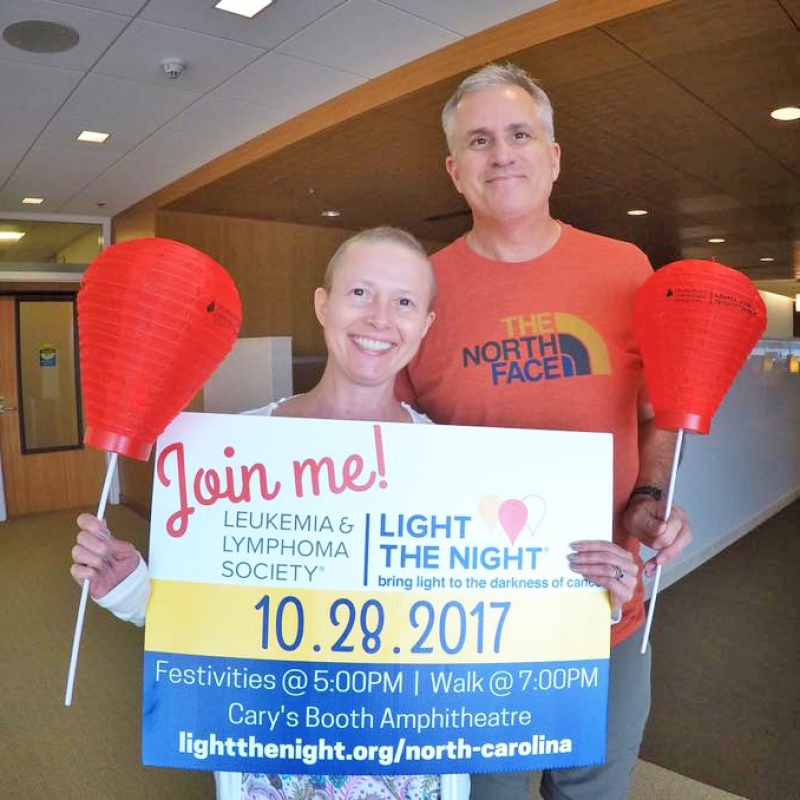 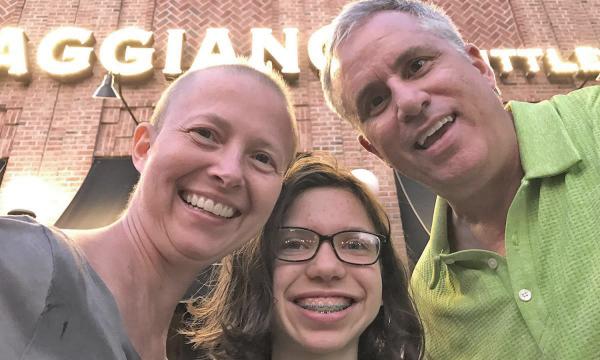 Joy Wood and family celebrating after her final chemotherapy treatment.After two visits to a local ENT doctor who performed two biopsies – both benign – and then a follow-up visit to her primary care doctor, Joy Wood was at a crossroads. For the past six months she’d been troubled by itchy skin and odd lumps in her neck.

Even after two benign biopsies, her primary care doctor wouldn’t rule out cancer. Insistent that she could not possibly have cancer, Wood found herself at odds with a doctor who now refused to move forward until she could substantiate her case.

“You need to prove to me that you don’t have cancer,” her doctor declared.

Unyielding, Wood pushed for a blood test, convinced the results would put her in the clear.

“I just couldn’t wrap my head around cancer,” said Wood, “but when the results came back, there was nothing to dispute; it was obvious I did need to see a specialist.”

Wood’s doctor referred her to Duke Cancer Institute. The team ordered yet another biopsy. This time, having sampled a greater amount tissue, the results were conclusive – Wood had stage 2 B Hodgkin lymphoma.

“That was unbelievably hard to hear,” said Wood, who lives with her husband and child in Danville, Virginia. “When I was told it was cancer, I made the decision then and there not to dwell on the word ‘cancer.’ Instead, I focused on reminding myself that Hodgkin lymphoma is curable.”

Hodgkin lymphoma is one of the most common and most treatable blood cancers. According to the American Cancer Society, Hodgkin lymphoma is a cancer that begins in white blood cells known as lymphocytes. Although Hodgkin lymphoma can start almost anywhere in the body, it most often starts in lymph nodes in the upper regions, chest, neck or under the arms. Early signs and symptoms can include lumps under the skin, which are actually enlarged lymph nodes, itching skin, fatigue and loss of appetite.

When diagnosed, Hodgkin lymphoma is also classified in each stage as A or B. If a person has B symptoms, like Wood, it typically means the lymphoma is more advanced, and intensive treatment is often recommended.

Wood has undergone chemotherapy, which most likely will be followed by radiation therapy.

“There’s definitely been a few bumps in the road,” recounted Wood, her voice cracking slightly at the memory. “I went through a particularly rough period in my treatment that resulted in a hospital stay. I had always been the one that others looked to for help, so it was really difficult for me to now be the one who sought the help of others. But I quickly learned that being able to lean on my family and friends made me a better fighter.”

On Sept. 14, Wood, all smiles, powered through her last round of chemotherapy. Her fight isn’t over. In the months to come, Wood will most likely begin radiation treatments.

“Honestly, I can’t stress enough how I couldn’t have found the right place sooner,” stated Woods. “It made all the difference being at Duke with doctors who knew what they needed to do. I’m ready for the next part of my treatment plan because of the care team here.”

On her final day of chemotherapy, Wood celebrated, in part, by signing on to participate in this year’s Light The Night Walk, an annual event hosted by The Leukemia and Lymphoma Society. The society, which raises funds to support the fight against blood cancers, currently funds more than $1 million in blood cancer research grants at Duke. Wood has formed a team, inviting her family and friends to support the fight against blood cancers.

“I hope to inspire others who may find themselves on a journey similar to mine,” said Wood, who hopes her participation will help raise both funds and awareness. “I want them to believe that they can also beat cancer. Even on the days when it feels like they can’t continue, I want to be there, front and center, to remind them that they can.”