Celebrating One Year Of Survivorship At Komen 5K 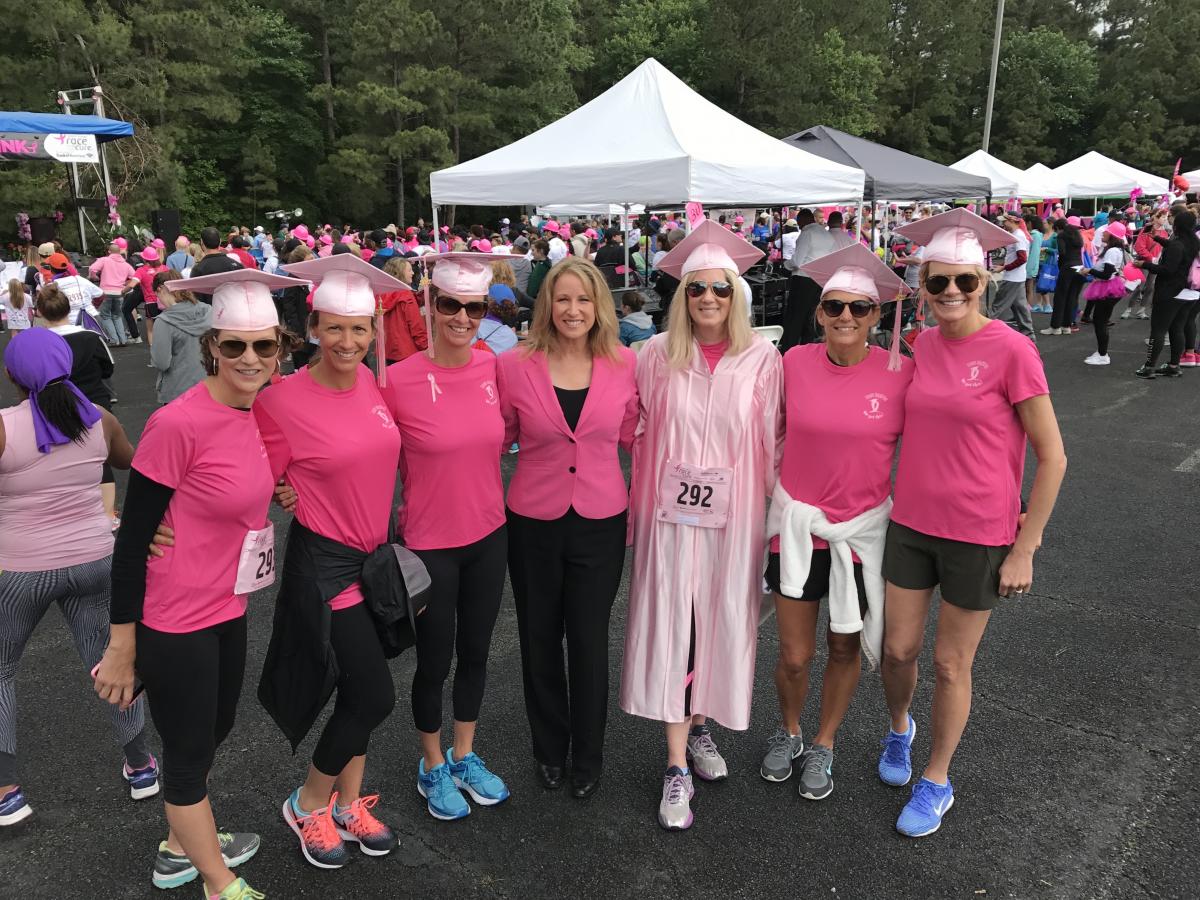 Elizabeth Johnson and her friends, sporting their "RadGrad" caps, pose with WRAL anchor Debra Morgan at last year's Komen Race for the Cure — one day after Johnson finished her final radiation session. (from left to right: Paige Walker, Jennifer Taylor, Tammie Key, WRAL anchor Debra Morgan, Elizabeth Johnson, Courtney Barden, and Julie Honeycutt) In the spring of 2016, Paige Walker, a breast cancer survivor, created her own commencement attire — a pink cap and gown — to commemorate her “graduation” from radiation treatments for her breast cancer.

She formed a team — RadGrad — and prepared to participate in her first-ever Susan G. Komen® Triangle Race for the Cure 5K. Walker wore the cap and gown to the race.

The day before the 2017 Komen race, Walker turned over the cap and gown to her friend Elizabeth Johnson who’d just completed her final radiation treatment for breast cancer.

“Paige said, ‘It’s your time for the cap and gown, you are graduating!’” said Johnson. “She even ordered extra caps for all my friends. After the race, I returned the cap and gown and asked Paige to pass it on to the next person.”

Johnson was diagnosed just nine months before the race. Although she and Paige were sometime tennis partners, they hadn’t seen each other in a while. A mutual friend suggested they talk.

“I was in the Panera parking lot when Paige called,” said Johnson, a busy real estate agent in Wilmington, North Carolina, and mom of two teens. “And I sat there and talked with her for an hour while she told me that it was going to be hard, but doable.”

Johnson had been in between annual mammograms, when, at age 45, she learned that what she assumed was just a small cyst was actually a large cancerous mass.

“I was just a deer in the headlights,” she said. “I’d always been the picture of health, never had a bad checkup, and always had good cholesterol. I even ran a half marathon five years ago. The diagnosis was a shock for me and my family.” 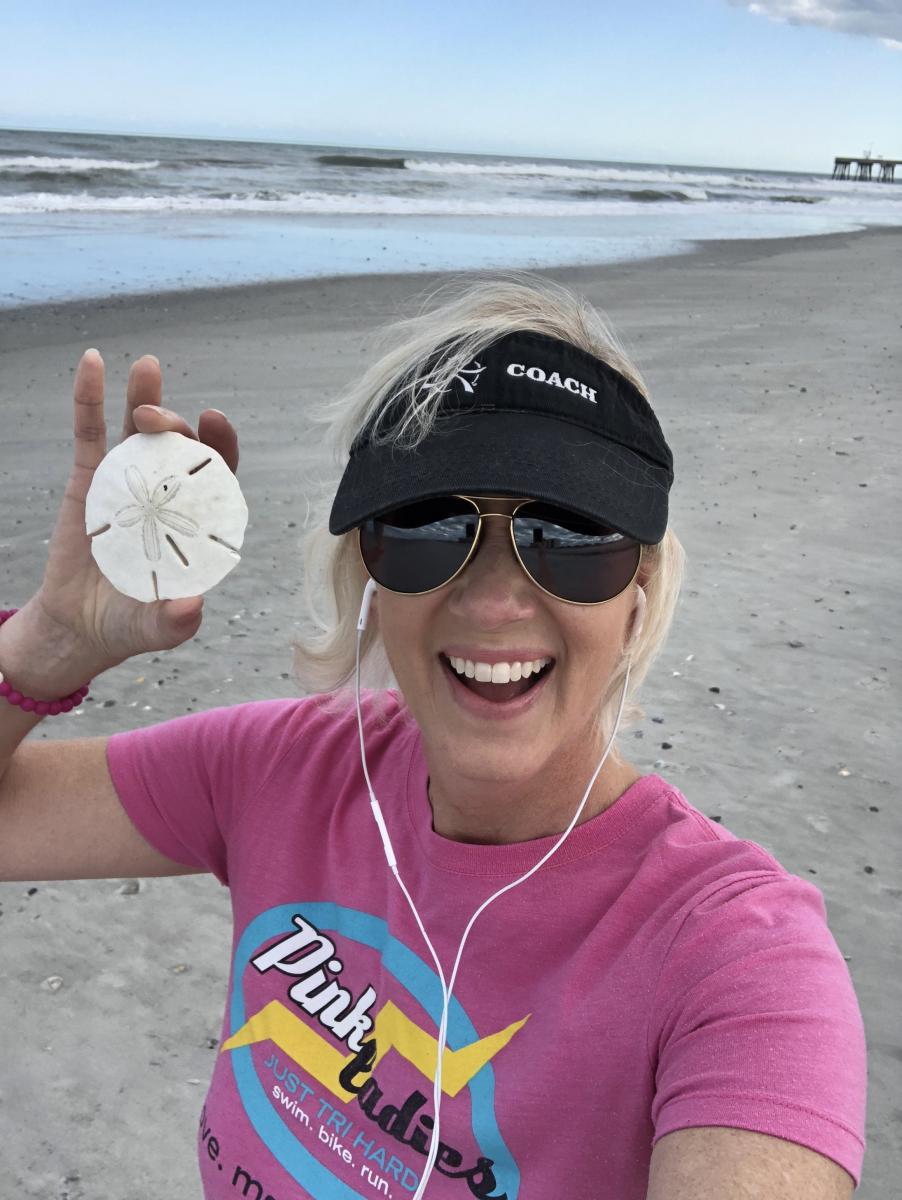 As Johnson reflects on how far she’s come on her road to recovery, she tries to cherish the small moments more. “One morning after a huge rainstorm, the shore where I usually run was like quicksand, so I was running just a little bit slower than usual,” she said. “And I looked down and I went ‘oh my gosh.’ I found a whole sand dollar, which I haven’t found since I was a little girl. It just made my day. It was my little moment.”Johnson spent most of August getting consults in the Wilmington area. Then, her father, a Duke alum who’d had an OB-GYN private practice in Durham for years, recommended she see Duke Cancer Institute's Kelly Marcom, MD.

“At soon as I went for the consult with Dr. Marcom, I decided I wasn't going to look anywhere else,” said Johnson, who grew up in Durham and knew several people who either worked at Duke or, like Paige, were treated there.

Johnson is now on a maintenance medication. She’s had a lot of joint pain, but said exercise helps. She does yoga and Pilates, and she runs on the beach — just a hop skip and a jump from her new home.

On May 5, Johnson gathered her friends and participate in the Komen 5K once again — one-year, to the day, since finishing treatment. She formed her own fundraising team, “Team EVD,”which stands for Elizabeth Van Dyke, the maiden name by which her high school and college friends know her.

In the photos from last year’s Komen race, Johnson is wearing a blond wig. She said she wore it mainly for her children who had a hard time with her losing her hair.

“All my son wanted to know when I was diagnosed was whether I was going to lose my hair and whether I was still going to play basketball with him in the driveway,’” said Johnson, who’s happy to have both her natural hair back and the return of her stamina for basketball.