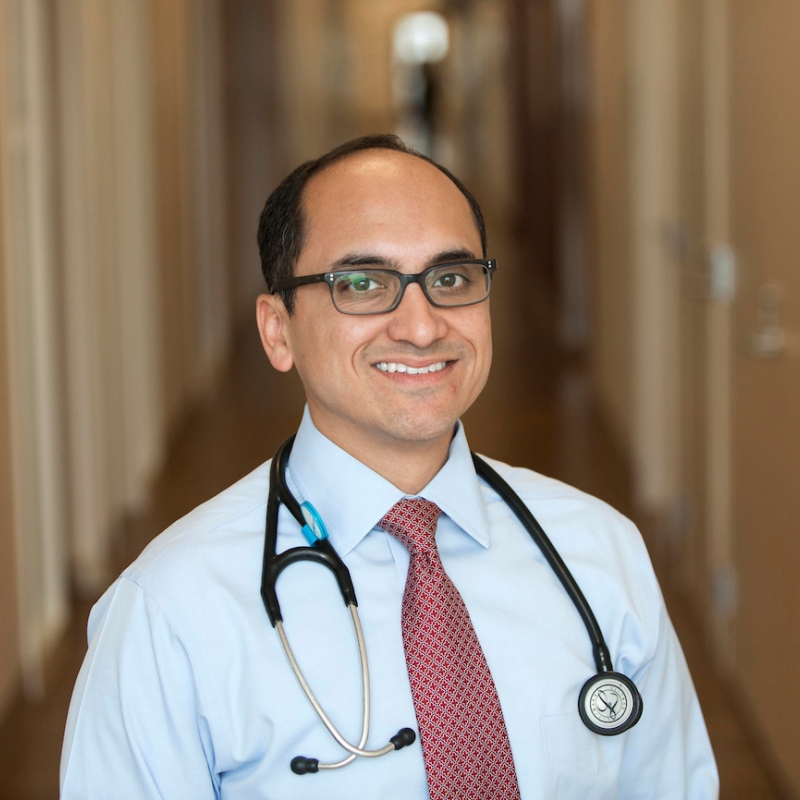 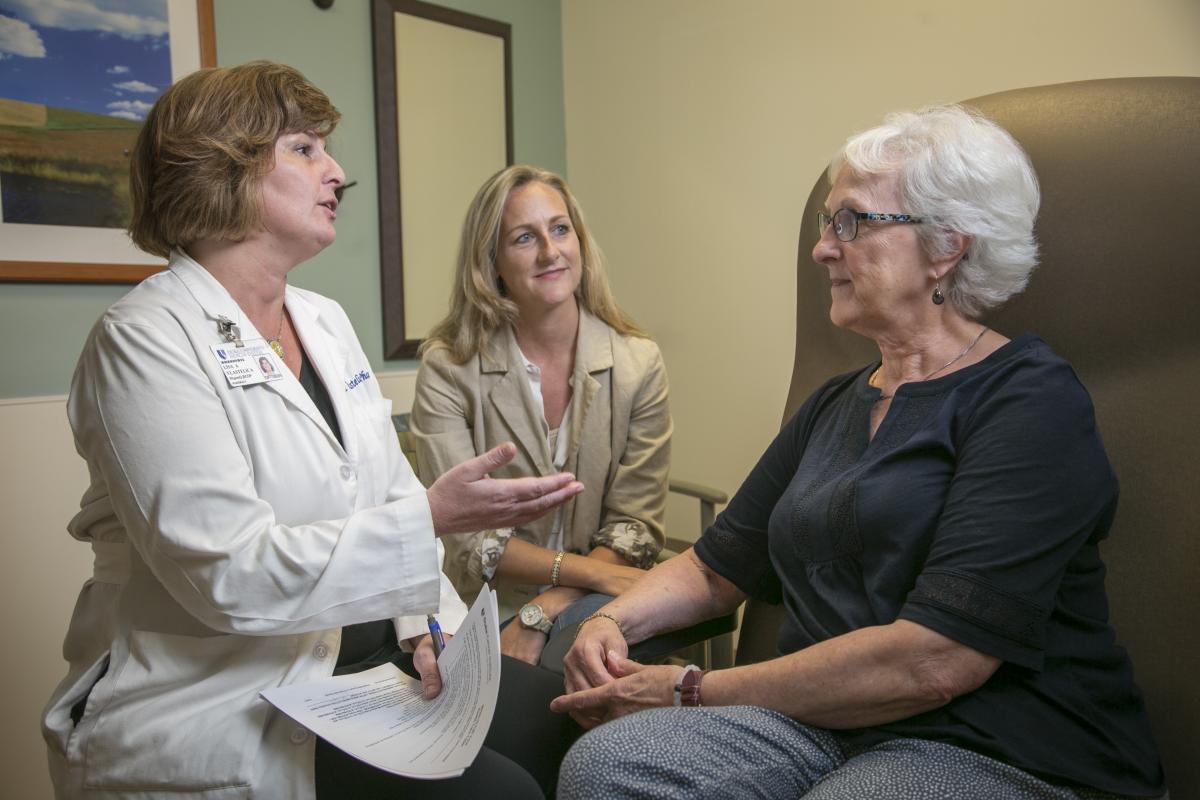 In clinic, pharmacist Lisa Vlastelica consults with pancreatic cancer patient Sandra Crossley about her prescription treatment options as her daughter, Andrea Spencer, looks on. (photo by Jared Lazarus)Financial toxicity. Google it and you’ll find it’s the new catchphrase to describe the escalating costs of cancer care.

The leading killer of patients under 85, the national expenditure on cancer is in the $200 billion range and overall patient spending on cancer treatment can easily reach tens of thousands of dollars a month. There are more than 1.6 million new cancer cases each year.

Since the economic downturn of 2008, Duke Cancer Institute gastrointestinal oncologist Yousuf Zafar, MD, M.H.S., has made the financial toxicity of cancer care the focus of his research. He looks at how the prohibitive cost, much like the physical stresses of the disease, can impact a patient’s well-being, quality of life, quality of care and even a patient’s mortality.

The stress from worrying about how to pay for cancer care, said Zafar, only compounds the shock of the diagnosis and the physical side effects of treatment. It can also lead patients to make choices that compromise their treatment, well-being, and health-related quality of life, possibly also putting their mortality at greater risk.

“Financial toxicity can be compared to the physical toxicity of cancer treatment, and should be considered another side effect,” he said.

Underinsured patients — those who spend 10 percent or more on out-of-pocket medical costs — are the group Zafar is most concerned about.

“Patients can be blindsided by their inadequate insurance coverage,” he said. “These are patients who tend to fall through the safety nets. Because they have insurance they don’t qualify for government assistance, but at the same time if they have poor quality insurance they can incur tremendous medical bills.”

A cross-sectional survey, published in the June 2016 issue of Psychooncology by Zafar and other Duke colleagues assessed which patients were at greatest risk for altering their care or lifestyle due to cancer treatment-related financial distress.

Among the participants surveyed, more than one-third altered their care, including not filling a prescription they
needed and taking less medication than prescribed. Researchers found that lower-income patients did this more than higher-income patients.

Nearly 90 percent of all surveyed altered their lifestyle, doing at least one of these things: spending less on leisure activities, borrowing money, spending savings, and even spending less on basics like food and clothing. Patients in the survey with more education and shorter duration of chemotherapy used lifestyle-altering strategies more than their counterparts.

Zafar said he’s always suspected that patients are reluctant to bring up cost with their doctors. In an earlier study, published in The American Journal of Managed Care (September 2015), he and colleagues found that slightly more than half of the patients they surveyed wanted their doctor to take costs into account to some degree when making treatment decisions, but slightly less than one-fifth actually talked to their doctor about costs. Most patients who did discuss cost with their doctors believed it helped reduce their expenses. 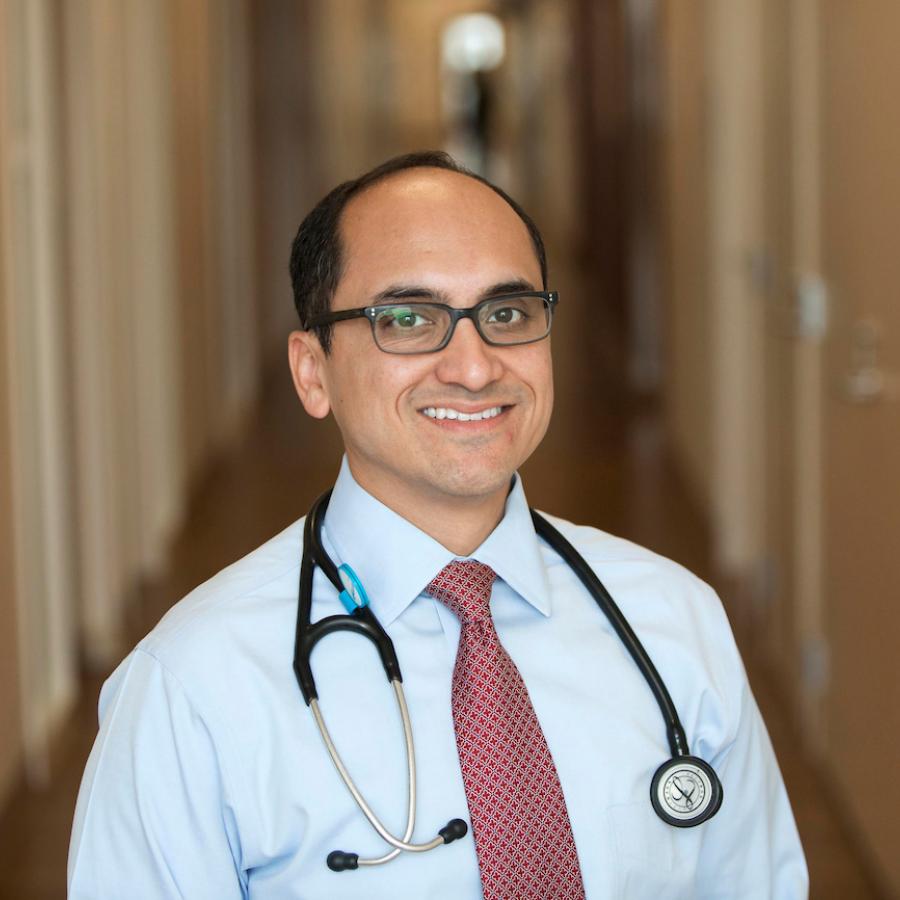 Yousuf Zafar, MD, MHSZafar said that one of the most common reasons for patients not to bring up costs was their concern they would receive lesser quality care.

“But that is not necessarily the case,” he explained. “Our study showed that in most cases, costs could be lowered without changing treatment.”

“The point of my research is really to engage patients in the process, and make the highest quality cancer care affordable so that at the time of a catastrophic diagnosis they don’t also have to worry about a catastrophic medical bill,” said Zafar, who relies heavily on a team of pharmacists, financial counselors and social workers who can help patients navigate some of the costs of treatment.

For example, when he and other oncologists prescribe drugs for a patient, a pharmacist like Lisa Vlastelica, who works in the GI oncology clinic at the Duke Cancer Center, is in the room to advise patients on next steps.

“I come in and look at their insurance coverage situation, tell them what I think they may be faced with, and lay out options on how they can go forward,” she said. 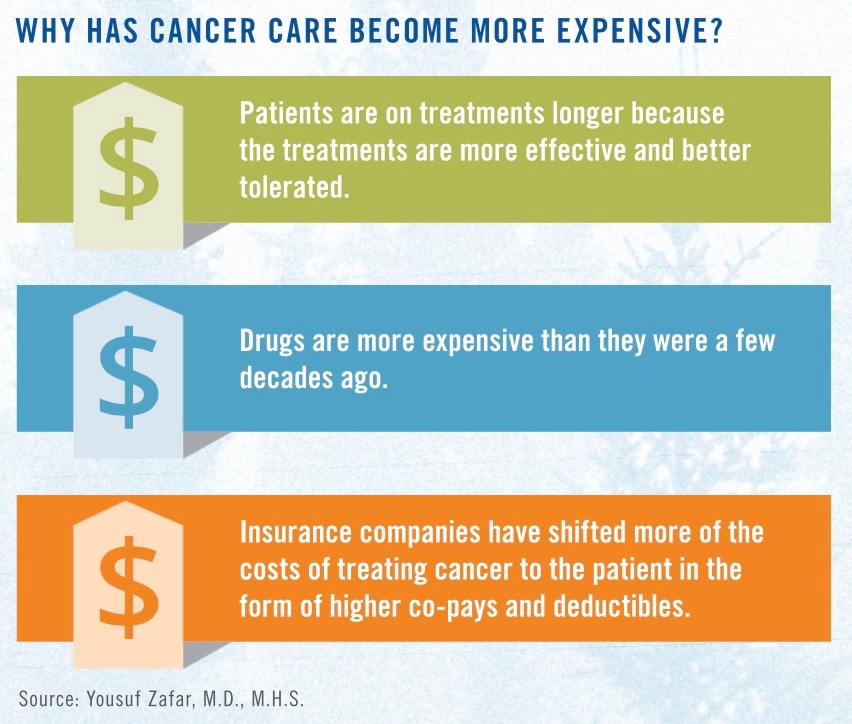 “For a lot of our patients it comes down to a choice between a chemotherapy infusion pump and chemotherapy pills,” she explained, describing the cost differential between drugs that come in both oral and intravenous forms, like the widely-used chemotherapy pill for colon cancer Xeloda (generic: capecitabine), and its intravenous equivalent, fluorouracil. 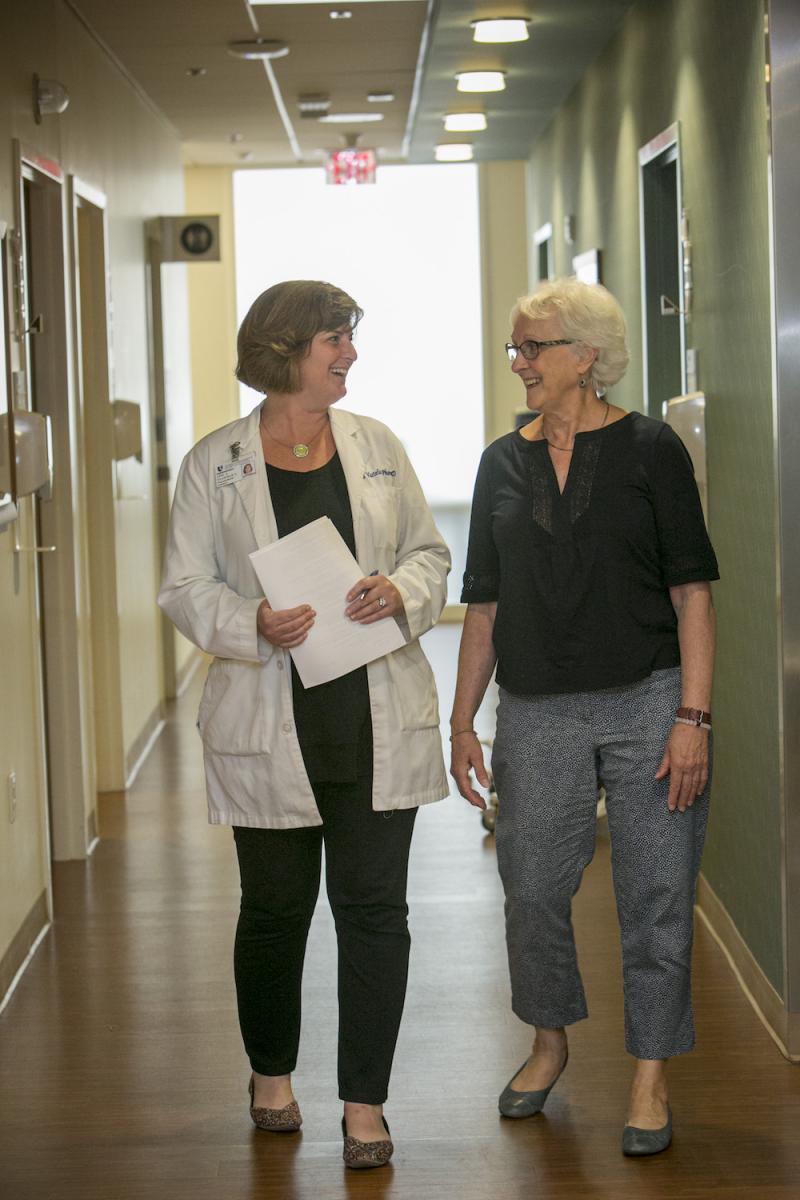 Some IV chemotherapy drugs are administered through a pump and tubing that’s attached to a port implanted under the skin. Worn for a period of time by the patient during treatment, it can be difficult to move around, sleep and work with it attached. The equivalent therapy in pill form (if it’s available), tends to entail higher out-of- pocket costs for patients.

Pancreatic cancer patient Sandra Crossley, 70, said she chose the convenience of the Xeloda pill over fluorouracil even though it was more expensive. The difference in price for her, with Medicare Advantage, was $690 for Xeloda versus $300 for fluorouracil for a 5.5-week course of treatment in mid-2016.

“It was just more convenient for me to take the pill at home every day, and I don’t have to worry about managing the pump and risking the infusion line tangling when I move around or sleep,” Crossley said.

Vlastelica, who counseled Crossley after she was referred by her medical oncologist Niharika Mettu, M.D. noted that “it’s still a big copay and one of the fortunate things is that she has a limited treatment with it.”

“If you had to pay that every three weeks it would add up,” she said.

Another Medicare patient referred to Vlastelica wasn’t so fortunate. He had to decline the Xeloda pill. The expense was prohibitive, yet he wasn’t sure how he could still continue to work while wearing a pump.

“It may be financially more feasible but may not fit with your lifestyle,” Vlastelica said.

Zafar has called for interventions: for doctors to be prepared for the cost discussion, to discuss goals of care with their patients early on, and to really focus on the value of care delivered.

“We as oncologists have to be responsible and have to be aware of our patients’ financial strain,” he said.