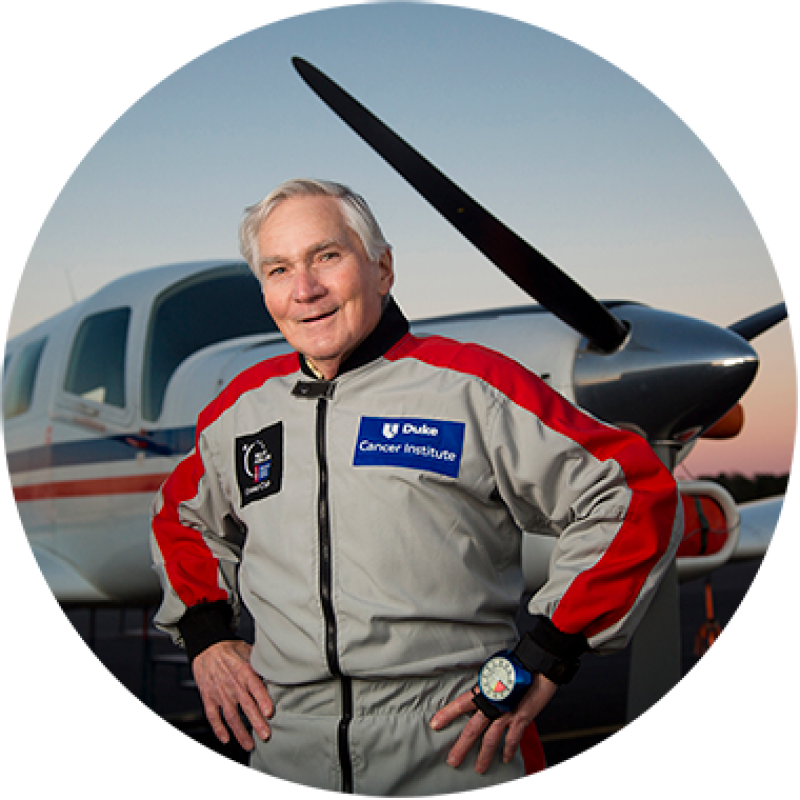 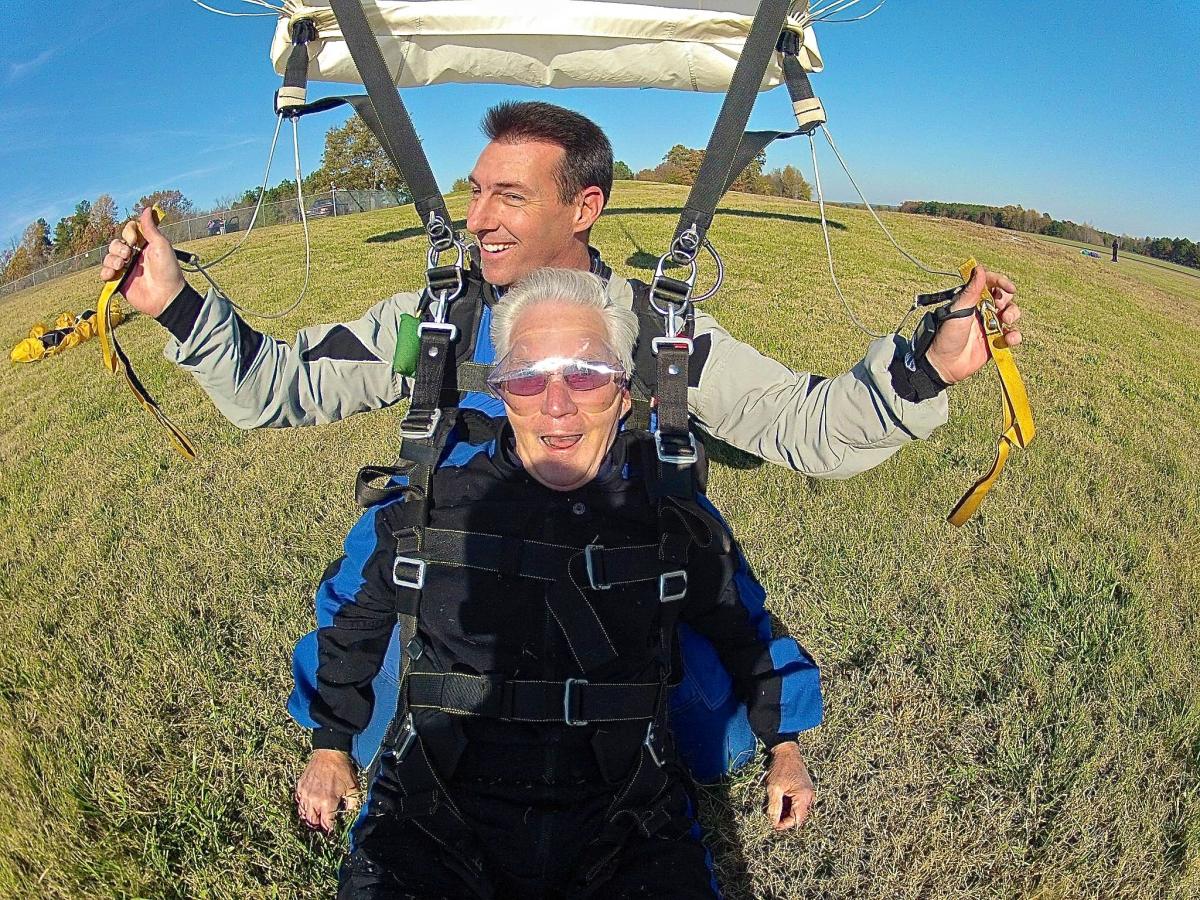 Lung cancer survivor Bob Norris lands safely back to earth after jumping with his tandem partner Gregg Upper. Norris is gearing back up for his third jump Nov. 9 at Triangle Skydiving Center in Louisburg.This isn’t Bob Norris’s first rodeo. To raise awareness and funds in support of the Duke Cancer Institute, the 82-year-old New Bern resident is once again dropping everything for what has become an annual free-fall adventure.

“I thought about all the different ways I could help make a difference,” explained Norris, who was diagnosed with stage 2 lung cancer in 2003. “I’m a survivor. I wanted to do something to raise awareness for cancer that hadn’t really been done before. Except for former President George H.W. Bush, there aren’t many 80-somethings skydiving. Jumping just seemed to make sense.”

A lifelong smoker, the retired shop teacher quit smoking the very day he received his diagnosis. He was treated by DCI’s medical oncologist Jeffrey Crawford, M.D., thoracic surgeon David H. Harpole, M.D., and Susan Blackwell, a physician assistant specializing in the treatment of cancer. Norris lost two thirds of his right lung, but he didn’t lose his cheerful demeanor, his compassion for others or his sense of adventure. 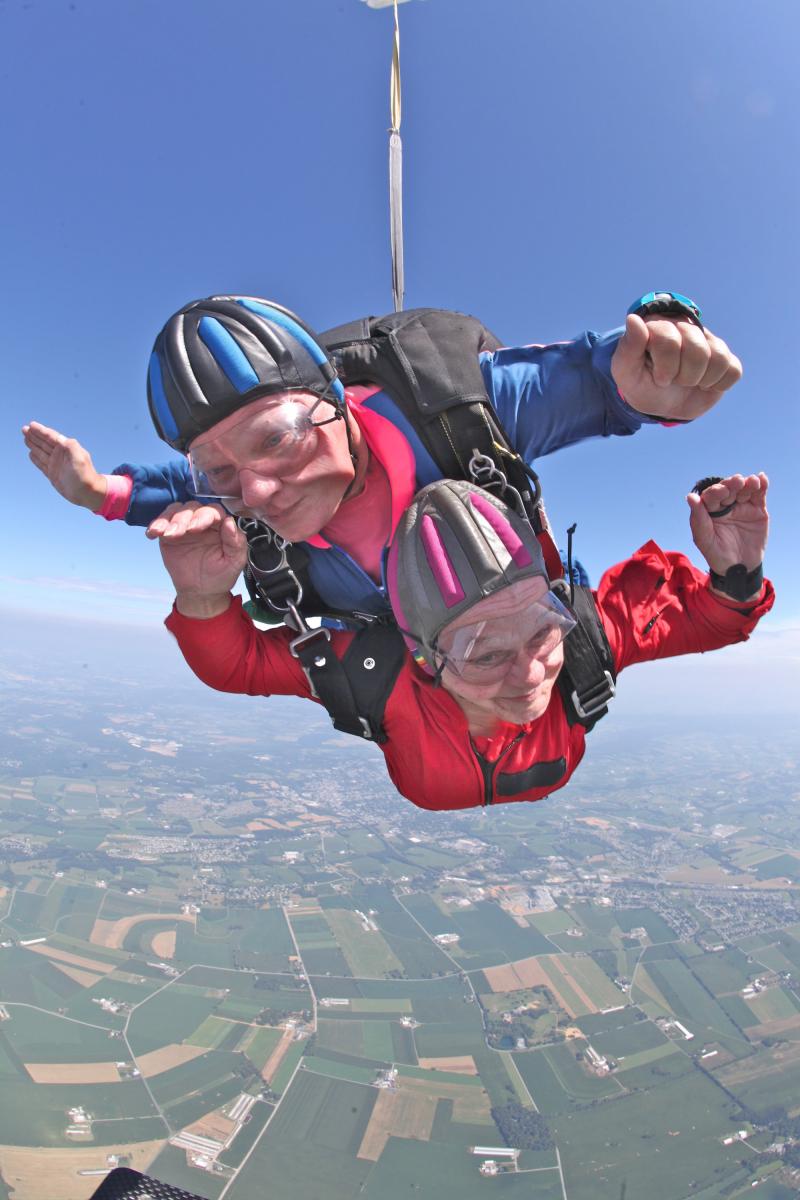 Barbara Whiteman, 80, makes her first jump in July in Maytown, Pennsylvania. Whiteman will make her next jump with cancer survivor Bob Norris on Nov. 9.In an ironic twist of fate, a few years after his own diagnosis, Norris lost his wife. Unbelievably, two years later he lost his 54-year-old son – his only son. Both wife and son died of lung cancer. Adopting a healthy lifestyle, today Norris stays fit and active, walking every day, riding his motorcycle with his buddies and donning his Duke blue jumpsuit for the annual daredevil drop.

“I’m not gonna lie,” Norris said. “The first time I jumped, I was plenty scared. You fall to earth at 120 miles an hour. Then, all of a sudden without warning, the shoot opens and you’re forcefully jerked upward. After that, you float; there’s just dead calm. The cascade downward is blissful. I’m not so scared anymore.”

Norris is slated to jump this year on Sunday, Nov. 9, with skydiving instructor and tandem partner Gregg Upper of Triangle Skydiving Center in Louisburg. Barbara Whiteman, 80, who after hearing Norris’s story, decided to join in on this year’s jump.

“When I heard about Bob’s wife and son, I knew I had to support his efforts,” said the Havelock resident with two jumps under her belt. “My husband, a retired Marine Corps. veteran who thinks we’re both a little zany, will watch from below. He promises to catch me, if need be.”

This year’s jump will take place between noon and 1 p.m. Norris has already begun securing sponsors and raising funds to benefit cancer research at the Duke Cancer institute. For more information or to donate, visit the official Bob Norris DCI fundraising page. 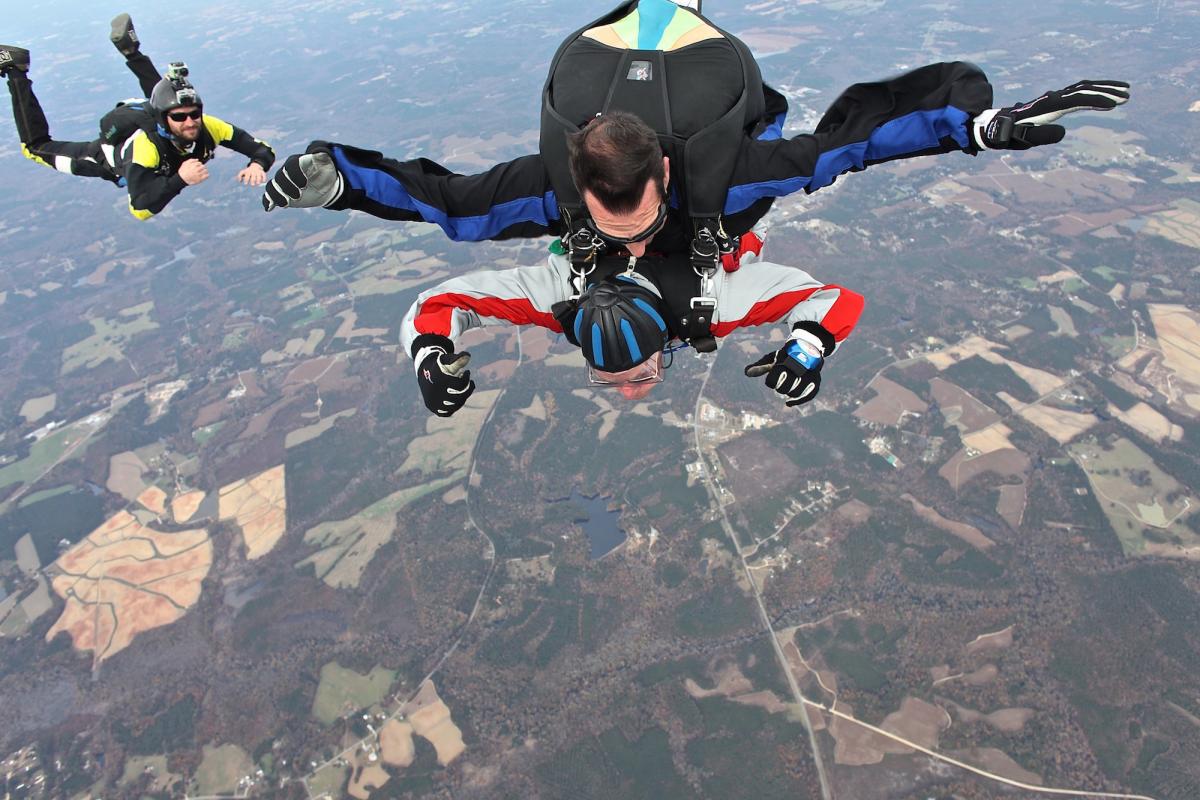 “This jump was the best one yet,” said Norris, after completing his third jump. “Gregg even let me handle the shroud lines on our way down. I look forward to next year’s jump.”