Fighting on Both Sides of Cancer Care 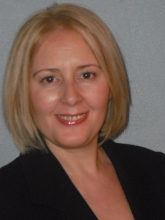 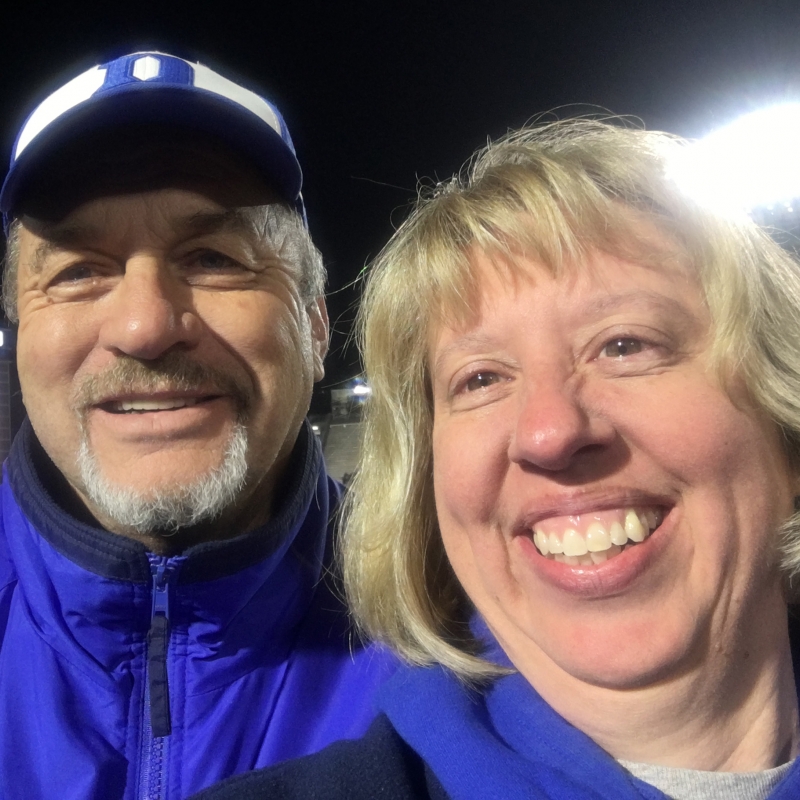 For 27 years, Heather Paradis, MSN, a 1995 graduate of Duke University’s Master of Science in Nursing Program, cared for cancer patients at Duke University Hospital as a hematology-oncology nurse practitioner. As she saw many patients fighting the disease, she had no idea that she would one day be on the other side of cancer care.

What she learned when she visited that other side is now helping others who have been touched by cancer.

In September 2016, Paradis’ husband of two years, Eric Paradis, went for his annual physical and had routine blood tests. The results indicated an elevated white cell count. “At first we thought it was just a reaction to poison ivy exposure, because Eric had cleared the area on which we started building our new house,” Heather says.

Eric, the owner of a successful drywall company, repeated the blood tests, and the results again showed an elevated white cell count and low hemoglobin levels. Heather, who worked with patients with blood cancers, decided to look at the trend of his white cell count over the years. “I knew what it was just by looking at his labs,” she says. “His monocytes had been elevated for several years. I realized that he had chronic myelomonocytic leukemia.”

Eric was referred to Murat Osman Arcasoy, MD, professor of medicine, for further diagnosis, who confirmed what Heather already knew. “He said: ‘I’m sorry,’ and I started crying,” she says.

Arcasoy recommended a bone marrow transplant, and Eric’s sister was found to be a matching donor. Eric did not need to start the treatment immediately, and he and Heather decided to finish building their house before scheduling the transplant. 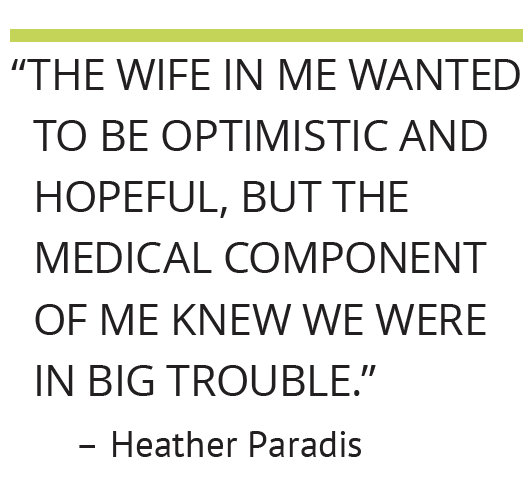 In March 2017, six weeks before completing the house, Eric’s white cell count started going up, and a bone marrow biopsy showed that his disease had changed to acute leukemia, which required him to go through an immediate chemotherapy treatment to put the disease into remission. After the treatment, they completed the house and moved in the first weekend of May.

A week later, Eric started the bone marrow transplant. Heather is grateful for a Duke research study, led by Anthony Sung, MD, which allowed Eric to have the transplant on an outpatient basis. The study investigated whether at-home care for stem-cell transplant patients would reduce infections and normalize their microbiome (the population of bacteria that inhabit the body). “We could stay in our brand-new house and enjoy it,” Heather says.

Unfortunately, Eric developed graft-versus-host disease, in which donor bone marrow or stem cells attack the recipient, and things got more complicated. In January 2018, Heather retired from Duke to focus on her husband's treatment and to spend more time with him. “The wife in me wanted to be optimistic and hopeful, but the medical component of me knew we were in big trouble,” Heather says. In October 2018, after more than two years of battling leukemia, Eric succumbed to the disease.

A month before Eric passed away, Heather met for lunch with a friend, and they talked about therapy. Heather knew about the Duke Cancer Patient Support Program (DCPSP) and had recommended it to patients when she was working. DCPSP offers free counseling sessions to cancer patients and their family members. At the time, the program had only two clinical psychology interns who covered the needs of all Duke cancer patients. Heather started seeing a therapist, and later Eric attended counseling with the other intern. “It helped us talk more and be honest with each other about the fact that we were scared and that Eric was afraid he was going to die,” Heather says.

In Eric’s memory, Heather decided to give back to the program that helped her during the toughest time in her life. In 2019, she established the Heather and Eric Paradis Cancer Support Fund, an endowment that supports an additional clinical psychology intern at DCPSP. Today, the program has three interns that rotate every year.

“We are so thankful for Heather’s gift,” says Tamara Somers, PhD, associate professor in psychiatry and behavioral sciences and codirector of the Cancer Behavioral Management and Support Clinic rotation, which trains the interns who work with the support program. “It has allowed us to add a third intern to the clinic who is dedicated to bone marrow transplant patients and their families, and we have been able to increase our services to this group and across the cancer center.”

Heather hopes that in addition to supporting patients and family members, the intern will support staff members who care for patients. “When I started talking with a therapist, I not only dealt with the fact I was losing my husband. I also dealt with all the grief that I had from losing patients that I never really dealt with before.” Somers says that she hopes to be able to provide support to staff members through mindfulness and relaxation activities in the future, under the guidance of the clinical psychology intern.

Heather has also made a bequest commitment that will provide additional support to the DCPSP, the Duke Hematologic Malignancies and Cellular Therapy Program, and Duke Athletics.

In addition to providing financial resources, Heather volunteers as a member of the Duke Oncology Patient Advisory Council, which works to improve the patient experience. The council created a Duke Cancer Center Survivorship Day event that is held yearly, developed a distress screening process for patients, and more. Heather provided her input on the revised patient resource booklet that DCPSP hands out to new patients and reviewed the content of new questionnaires for patients. She is also on the board of the Duke Cancer Institute Supportive Care and Survivorship Center. “The ability to use my knowledge and experience working with Eric to continue to help people gives purpose and meaning to my life,” she says.

Last year, around Eric’s birthday in November, Heather hosted a fundraising event for the Duke Cancer Institute Supportive Care and Survivorship Center at her home. This year, due to COVID-19, she hosted it via Zoom video conferencing. “It's a way to remind us of Eric and support the center,” she says.

You Can Make A Difference

To donate in honor of Eric Paradis, click here.