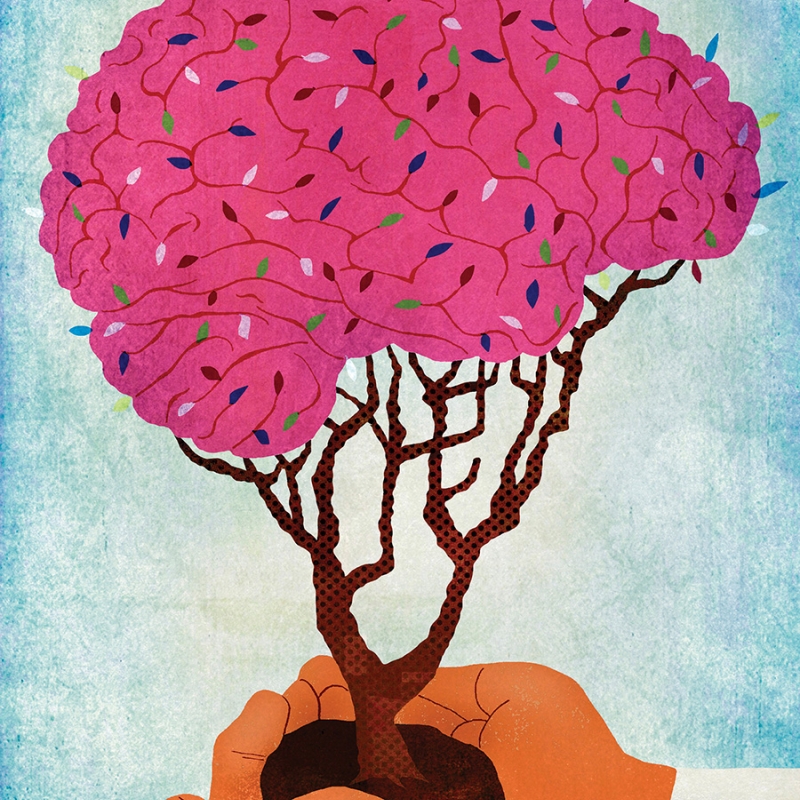 A world-class team comes together to provide new answers for people with cancer that has spread to the brain and the spine.

People tend to think of Duke as the place to go for brain tumors, period. To patients and families, cancer is cancer, whether it started in the brain or spread there from elsewhere in the body.

Fecci wanted Duke to become a leader in treating all kinds of brain cancer, including secondary, also called metastatic cancer.

“When you look at our university and what our strengths are, all the ingredients were there to take the model the Tisch Brain Tumor Center had been built on—systematic multidis­ciplinary care with patient service and experi­mental therapies—and focus that same model onto brain metastasis,” says Fecci, associate professor of neurosurgery. 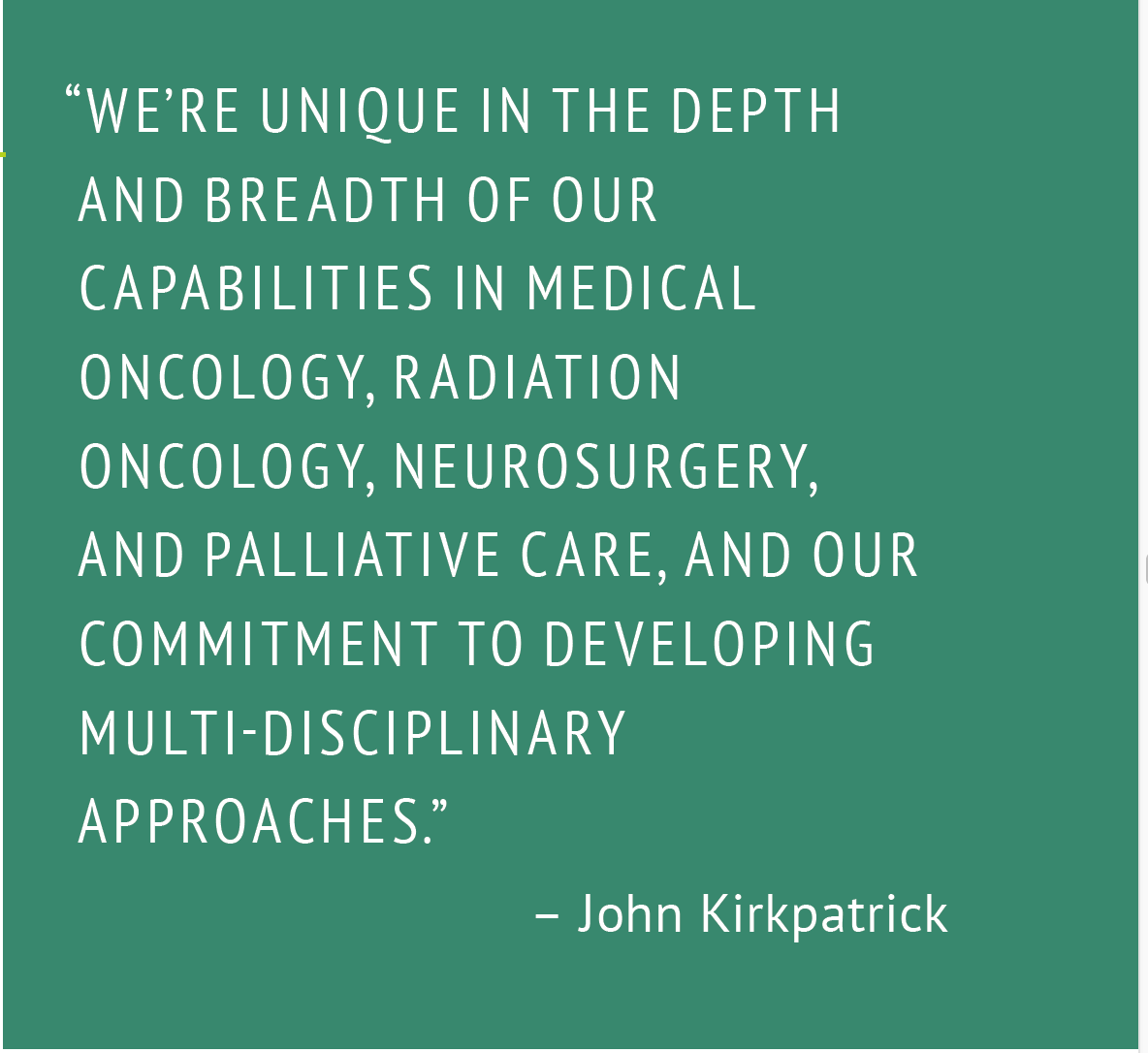 The number of people with brain metastasis has risen rapidly in recent years because people with advanced cancer are living longer—and that gives the cancer time to spread to the brain. “It is an area ripe for forging new pathways,” says Fecci. “There’s a lot more to be done for these folks than 10 or 20 years ago.”

About the same time that Fecci had his “aha moment,” a spine surgeon with an interest in metastasis joined the Department of Neuro­surgery: Rory Goodwin, MD, PhD, assistant professor of neurosurgery. The spinal cord and the brain are both part of the central nervous system, so it was natural to expand the idea of the center to include the spine.

The Center for Brain and Spine Metastasis launched in 2017, with Fecci as director, Good­win as surgical director, and John Kirkpatrick, MD, PhD, as radiation director. Last year, Carey Anders, MD, joined the team as medical director (see sidebar on page 13). The center is supported by Translating Duke Health, an initiative of Chancellor Eugene Washington that aims to harness the expertise and knowl­edge found at Duke to address society’s most significant scientific and healthcare challenges.

Fecci says, “Our plan is to become the destination center for brain and spinal metastasis in the United States.”

Combining the expertise of oncologists, radiologists, and surgeons creates a synergy that benefits patients at the Center for Brain and Spine Metastasis. At weekly tumor board meetings, the providers pool their knowledge to come up with the best combination of treatments for each patient.

“We’re unique in the depth and breadth of our capabilities in medical oncology, radiation oncology, neurosurgery, and palliative care, and our commitment to developing multi-disciplinary approaches,” says Kirkpatrick, professor of radiation oncology.

Kirkpatrick likens the multi-disciplinary approach to a symphony, with each provider playing a different instrument to create something new and powerful. Similarly, combining treatments from different disciplines can result in unexpectedly effective results.

“In a center where we focus on one type of disease rather than one particular way of treating it, we can really realize the benefits of new technologies, particularly in combination,” he says.

Taking Care of the Whole Patient

In addition to treating the cancer, the team pays close attention to the person with the disease.

Palliative care providers are part of each patient’s team, offering a range of services, from pain relief to end-of-life planning. Each patient has unique goals, whether maintaining independence, not being a burden to others, or seeking relief from side effects. Palliative care can help with all of those. As Kirkpatrick says, “Our goal is not just to have people live longer, but to have people live better.”

To reduce stress for patients, the center strives to see new patients within 72 hours, and to streamline their complex care once treatment begins. New patients see all the members of their team sequentially in one day, usually in the same clinic.

In the past year, the center has hired a new-patient coordinator, two patient navigators (one for brain, one for spine), and an inpatient physician assistant to coordinate care for hospitalized patients.

Natalie Ashley, BN, GradDipAdvn, who used to be the sole patient navigator, has been promoted to program manager. In that role, she is involved with strategic planning and developing new systems for the rapidly growing center. She continues to be involved in patient advocacy as she manages the newly hired coordinators and navigators.

Patients at the Center for Brain and Spine Metastasis have access to cutting-edge techniques and therapies.

Stereotactic radiosurgery, for example, zaps metastases with high doses of radiation. (Although it’s not actually surgery, it is “surgically precise.”) Compared to the traditional whole-brain radiation, tumors receive more radiation and healthy brain tissue receives less. For patients, that means fewer disturbing side effects like difficulty with thinking, language, and memory. Stereotactic radiosurgery is used for spine metastases as well, where it can be helpful in reducing pain.

LITT, or laser interstitial thermal therapy, is a minimally invasive surgical technique that kills tumors using heat generated by lasers. Rather than physically cutting out a tumor, surgeons drill a small hole in the skull and insert a laser probe. LITT can also be used to treat tissue that’s been damaged by previous radiation. Duke is one of the highest volume centers for LITT in the United States.

Currently, LITT can only be used with relatively small tumors, but Fecci is working with Duke biomedical engineers to change that. The new technique uses gold nanoparticles called nanostars to improve the range of the laser. “It expands the heat coverage allowing you to treat a larger tumor,” he says. In a collaboration with the NC State College of Veterinary Medicine, Fecci has begun testing the nanostars in a clinical trial in pet dogs that have developed brain tumors.

Using LITT in the spine is more complicated, but Goodwin and Muhammad Abd-El-Barr, MD, PhD, assistant professor of neurosurgery, are training in the new technique. Once they are up and running, Duke will become the second medical center in the United States offering LITT for the spine.

Designing pharmaceuticals, immunotherapies, or other medical therapies for brain or spine metastasis is challenging because the blood-brain barrier keeps many compounds in the blood from reaching the central nervous system.

Anders, professor of medical oncology in the Department of Medicine, is not one to shy away from hurdles like this. She is actively looking for and evaluating medical therapies that will attack central nervous system tumors along with primary cancer elsewhere in the body.

“My passion is developing clinical trials for patients with brain metastases,” she says.

In the past, patients whose primary cancer had metastasized to the brain or spine were often excluded from clinical trials. Today, more trials are accepting these patients (there are about two dozen at Duke Cancer Institute), but trials designed specifically for them are still rare.

That’s a problem in the view of Katie Mackin, a young mother and physician assistant living with metastatic cancer (see “Living a Full Life with Stage 4 Cancer,”). “It’s really important to support research for stage 4 cancer,” she says, “because stage 4 cancer is the one that kills.”

Since Anders has joined the team, the number of clinical trials in the center’s pipeline has ballooned. A dozen or so clinical trials are in development at the center, and several are set to launch this year, including one that matches one of three medical therapies to the genetic signature of a patient’s metastatic brain tumor. Other current or upcoming trials relate to radiation treatment, imaging techniques, and optimal sequencing of immunotherapy and surgery.

For patients with spinal metastasis, Goodwin is heading up a clinical trial that will create a registry of data on tumor genetics, treatment, and outcomes. The trial will also collect data about patient-reported outcomes related to quality of life.

The data in the registry will be able to answer a wide variety of research questions. “Some questions are physician led,” says Goodwin. “What is the best dose? How does this radiation treatment interact with this drug? But these studies also allow us to ask some questions about treatments that patients really want to know the answer to: What will my life be like? Will I beable to walk? How much pain will I be in? Should I go through with this?”

Every clinical trial is built on a foundation of years, even decades, of pre-clinical research. A deeper understanding about how and when cancer metastasizes, how it reaches the central nervous system, and how it behaves once there can spark ideas for strategies to interrupt the process.

Throughout the center, and Duke at large, researchers are investigating many aspects of metastatic cancer and the central nervous system with their eyes on the prize of better treatment or prevention.

Anders is particularly excited about an upcoming project to sequence the DNA of banked brain tumors to try to discover similarities and differences among metastases arising from different types of primary cancer. She also wants to explore ways in which metastatic tumors differ genetically from primary brain tumors. Answering these questions could help reveal, among other things, whether treatments that work against one type of tumor would have potential for another.

Meanwhile, Fecci has been collaborating with others, including Nobel Laureate Robert Lefkowitz, MD, the James B. Duke Professor of Medicine, to come up with strategies to stop brain tumors from evading the immune system. One way brain tumors do this is by sending out signals that cause important immune players called T cells to sequester themselves in bone marrow rather than attacking the tumor.

“We have found a target in T cells that would help reverse sequestration, and when we go after the target, it actually does a lot more than that,” Fecci says. “It has a tremendous impact on survival for a number of kinds of cancer in mice, a lot more than we bargained for.”

When the target was genetically knocked out in mice, the researchers saw 50-100 percent long-term survival across several different types of cancer.

Before the idea can be tested in humans, several crucial steps remain, including identifying a compound that could be used as a pharmaceutical.

“We’re screening compounds that have the activity that we want against our target, and the goal is to test it in mice in the near future,” he says. Fecci is optimistic that this new class of anti-cancer compounds could be ready for a clinical trial in humans in the next year or two.

And he’s optimistic about its potential. “It’s the best anti-cancer treatment I’ve ever seen in mice,” he says. 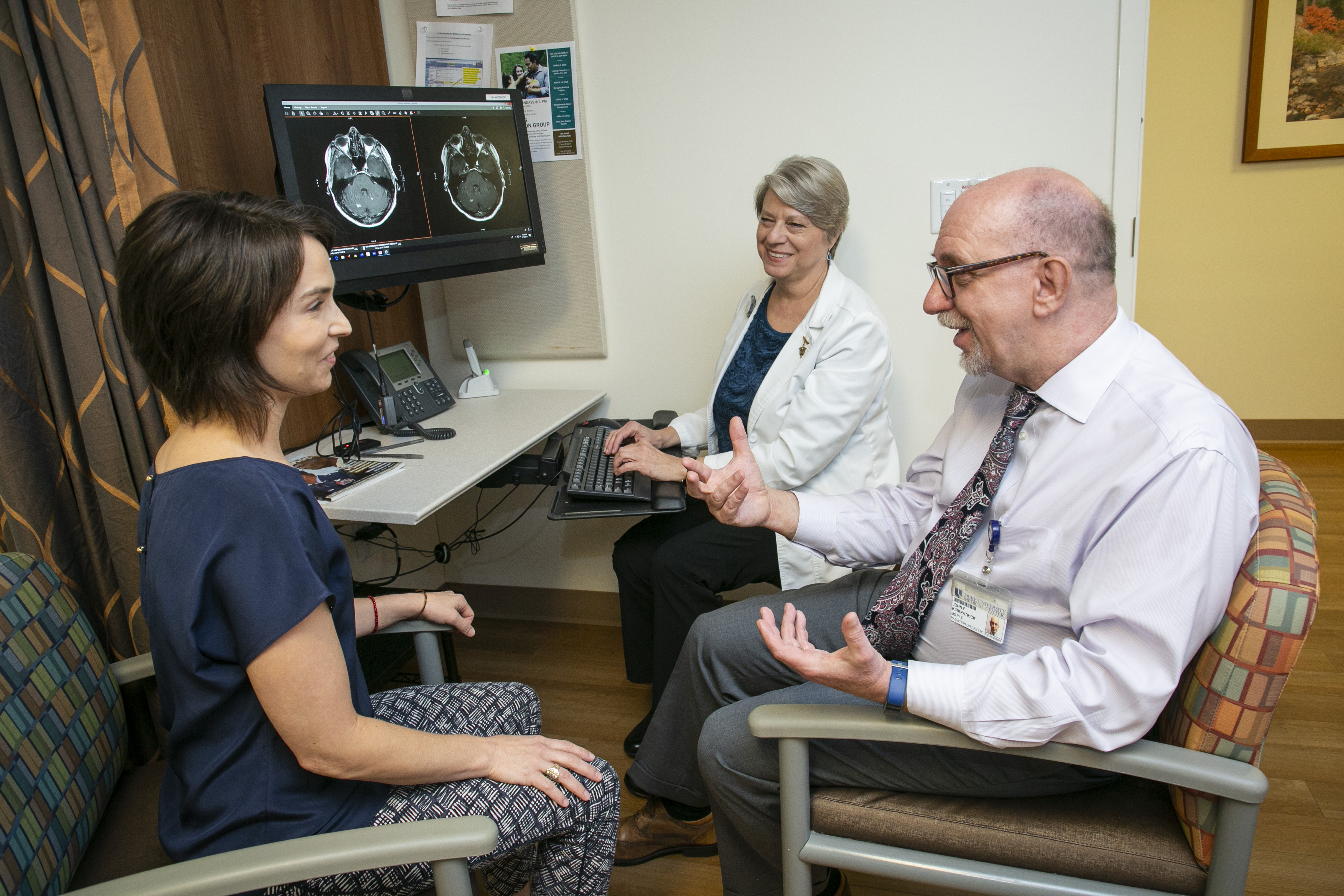 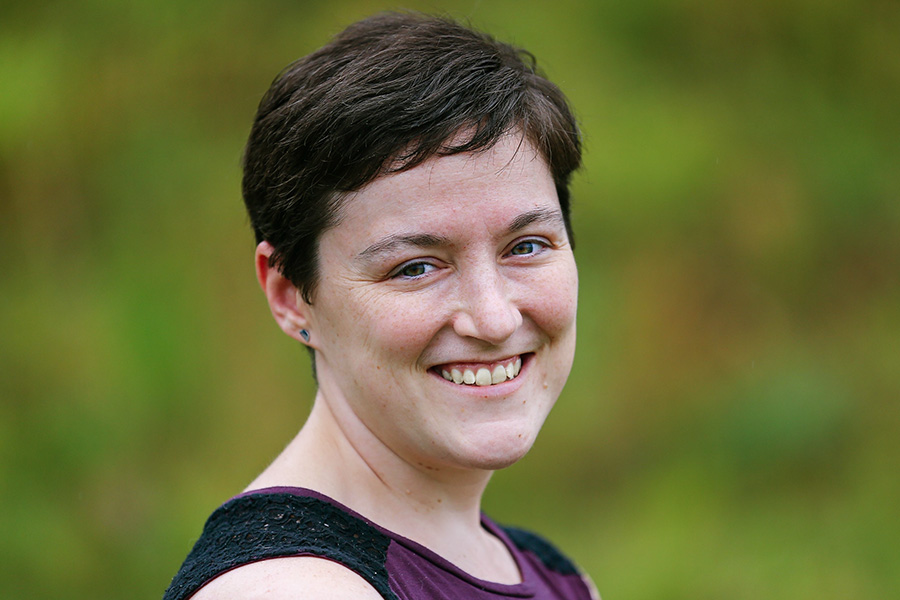 After surgery to remove a tumor from her spine, physician assistant Katie Mackin has been stable since August 2018 and hopes to remain that way for a lot longer. Read her story. 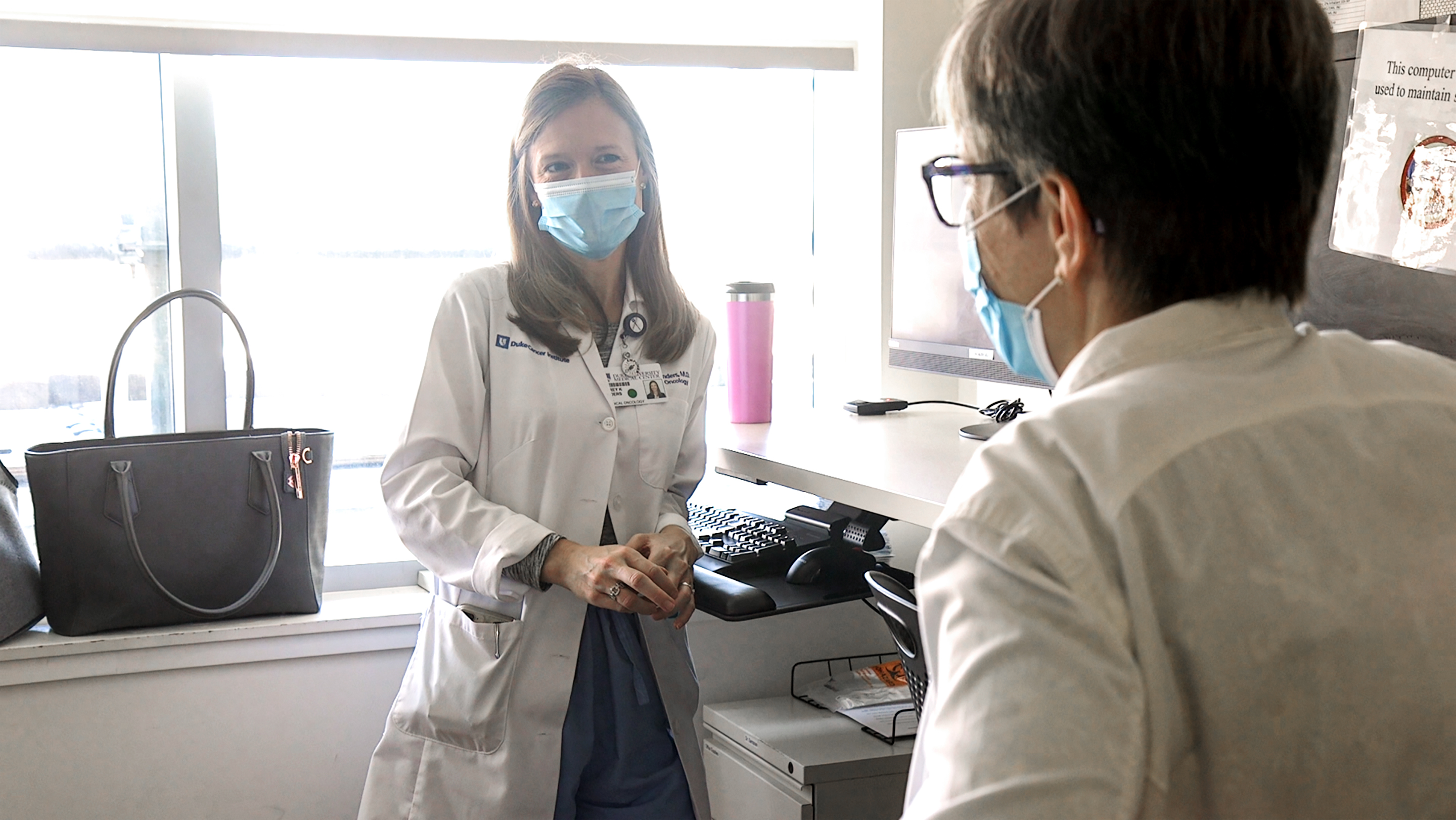 Soon after joining the leadership team of the Center for Brain and Spine Metastasis, Carey Anders, MD, began leading development of a portfolio of clinical trials just for patients with brain and spine metastases. Read more.

You can accelerate progress in beating brain and spine metastases. Please make a gift today.