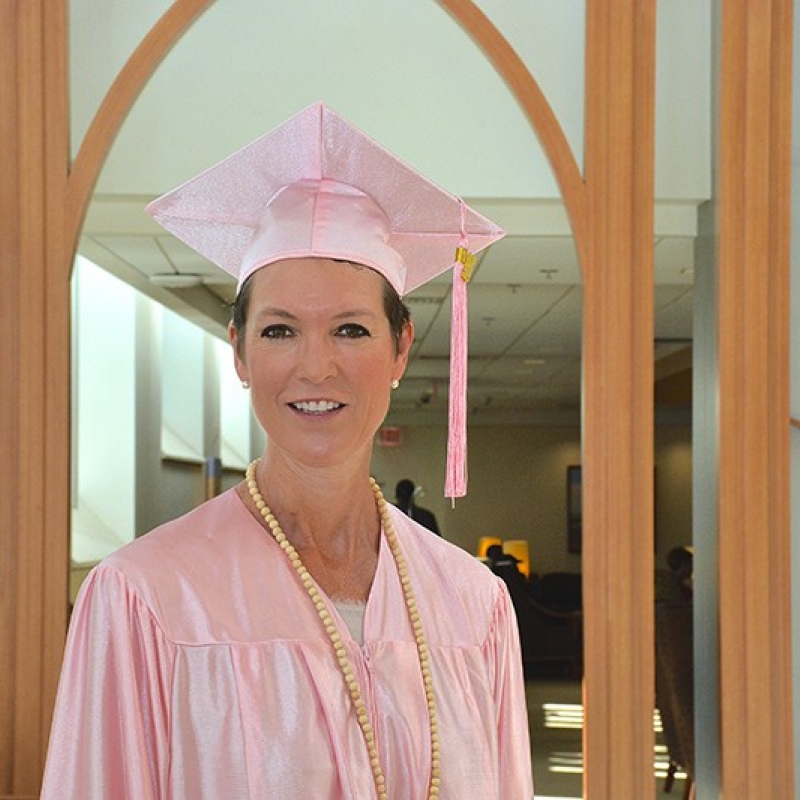 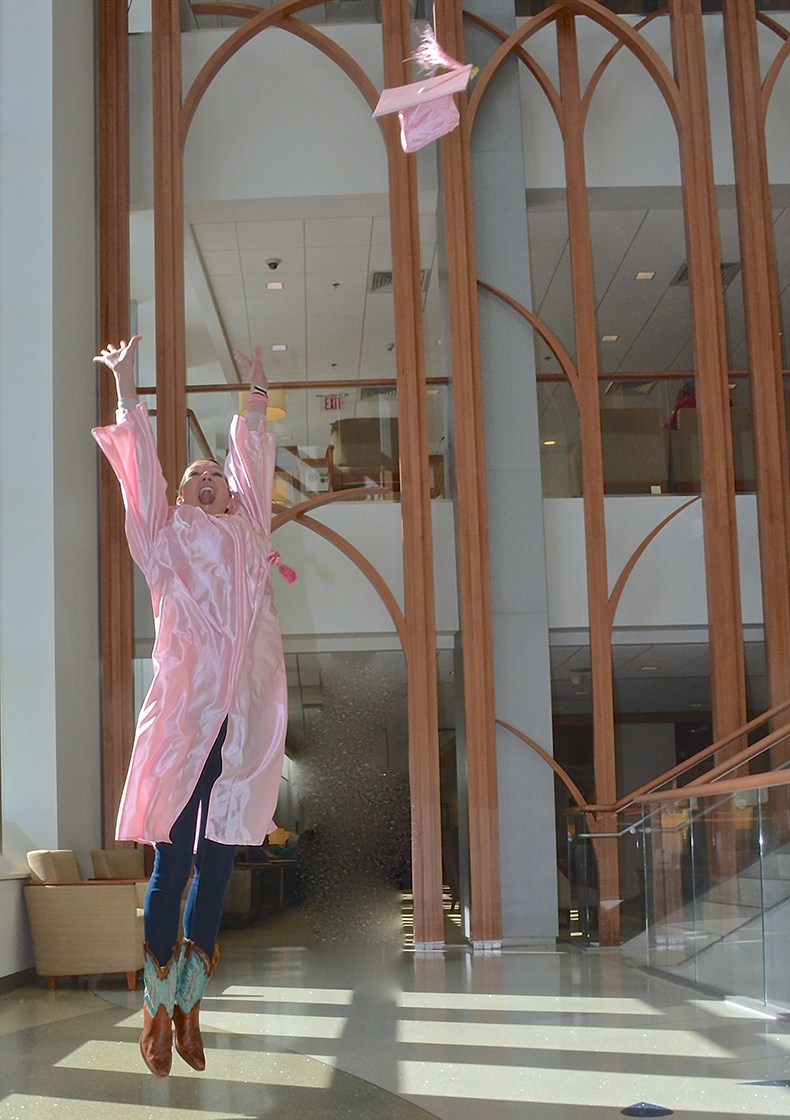 A jubilant Shannon "Paige" Walker celebrates her graduation day—her last day of treatment for invasive ductal carcinoma.As seniors across the nation are donning caps and gowns for high school and college graduations, on Friday, April 29, Shannon “Paige” Walker put on her own commencement attire for a graduation of a different kind.

“This is my final day of radiation,” declared Walker, a patient at Duke. “I’m celebrating the person I’ve become as a result of this death-defying test in cancer.”

Two years ago, Walker, a veterinary sales representative who lives in Wilmington, noticed a very small knot in her breast. However, after visiting her gynecologist and undergoing two annual mammograms, her doctor remained unconcerned, explaining that the knot was most likely a small calcium deposit in her breast tissue. These calcifications are very common and usually benign, shared her doctor. Over the next year, the “knot,” located near Walker’s left armpit, seemed to enlarge. In early June of 2015, Walker, ready for summer, was trying on bathing suits when she realized the protrusion in her breast was now visibly noticeable.

“Yes, I’m vain,” Walker said, with a chuckle. “I had pretty much decided I was going to have it taken care of cosmetically. I had a longstanding appointment with my doctor and happened to mention to her my intentions to have the knot removed.”

After an examination, her doctor ordered a mammogram and then an ultrasound. It wasn’t long after that Walker learned she had stage 2 invasive ductal carcinoma (IDC), also referred to as infiltrating ductal carcinoma. Abnormal cells that initially formed in her milk ducts had now spread beyond the ducts into the fatty tissue of her breast. 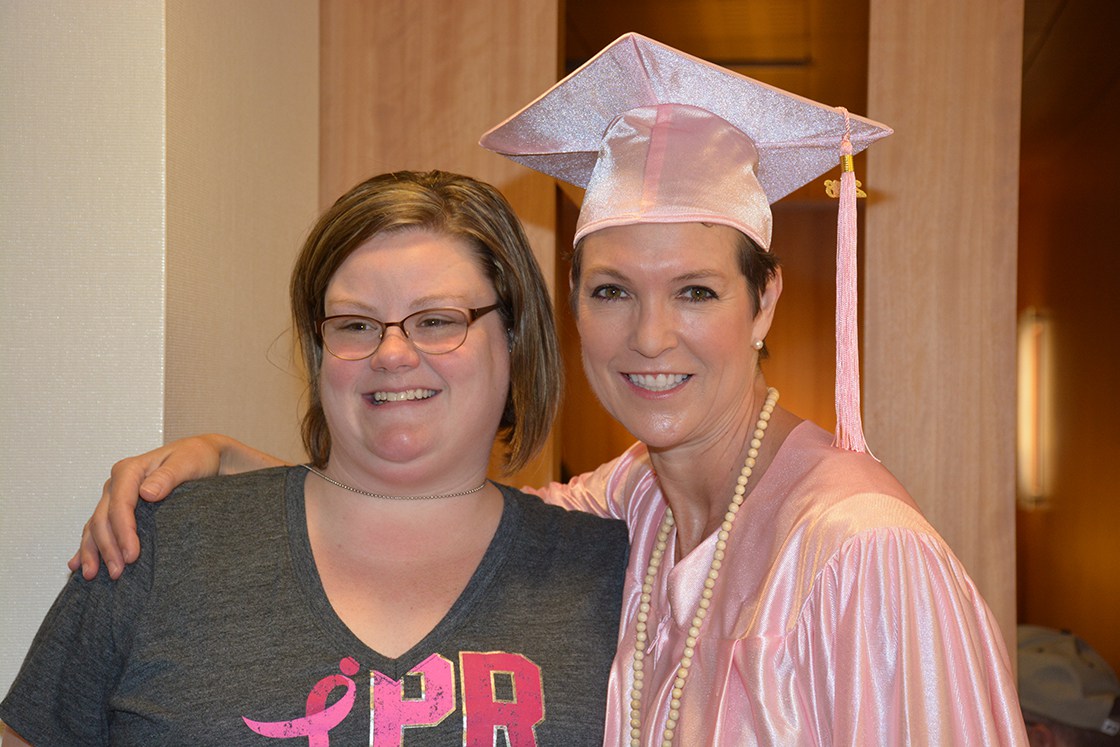 Walker thanks Brandi Robeson, her radiation therapist, while at her final day of radiation therapy.Invasive ductal carcinoma is the most common type of breast cancer, accounting for about 70 to 80 percent of all breast cancer diagnoses. According to the American Cancer Society, there were an estimated 231,840 new cases of invasive breast cancer in 2015. If not caught early, IDC can metastasize or spread to the other parts of the body through the lymphatic system. Walker’s doctor referred her to Duke Cancer Institute, where her multidisciplinary team, including medical oncologist Gretchen Kimmick, MD; surgical oncologist Randal Scheri, MD; and radiation oncologist Manisha Palta, MD, tailored treatment recommendations that included a lumpectomy to remove the tumor, chemotherapy and finally, radiation.

“I immediately knew I had the best care possible,” said Walker. “My doctors and nurses were always there for me; they became my friends. But my journey was not to be without setbacks and momentary disappointments.”

Walker’s first surgery revealed her cancer has spread to four of her lymph nodes. During her second surgery to remove the lymph nodes her surgeon discovered a previously undetected tubular tumor.

“When Dr. Scheri told us the cancer had spread to Paige’s lymph nodes, it felt like someone had sucked the air out of the room,” remembered Walker’s dad, David, his eyes welling up with tears. “We were all scared and emotional.”

After surgery, hormone tests showed Walker was both ER-positive and PR-positive. Cancer cells that are ER-positive and PR-positive have receptors that attach to estrogen and progesterone, two hormones which often fuel the growth of breast cancer cells. In addition to hormone therapy, Walker’s team of specialists, which now included gynecologic oncology specialist Andrew Berchuck, MD, recommended ovarian ablation, removing or shutting down the ovaries, which are the primary source of estrogens. This procedure can allow other prescribed hormone therapies to be more effective.

"Walking through the threshold was like a hug," said Walker of her first visit to Caring House. "Everyone was so welcoming. Even if it's family, being a guest can be hard work—especially if you're ill. Caring House is easy because you don't always have to be on." 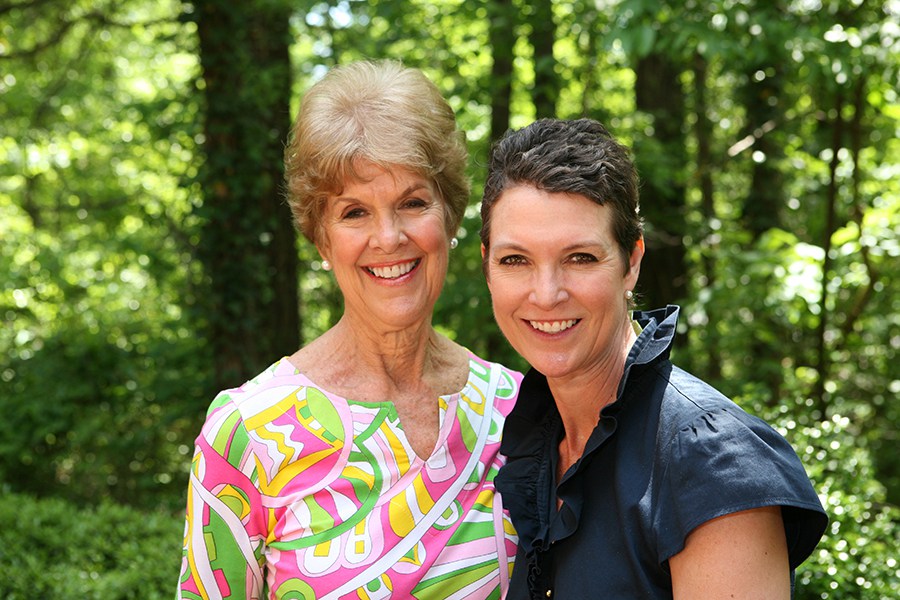 Walker poses with her mother, Theresa Pleasants, while at a “graduation” luncheon hosted at Caring House on April 29. Walker stayed at Caring House during her outpatient treatments. “Walking through the threshold was like a hug,” said Walker of her first visit to Caring House. “Everyone was so welcoming. Even if it’s family, being a guest can be hard work—especially if you’re ill. Caring House is easy because you don’t always have to be on.” Photo taken by Sheridan van Wagenberg, executive director of Caring House.Despite the setbacks Walker remained upbeat and hopeful, celebrating all along the way the “small victories.” She brought to her clinicians homemade treats and baked good, many of which creatively expressed her single mission to “give cancer the boot.” Throughout her treatment Walker was surrounded by family, friends and colleagues who made sure she felt abundantly cared for and supported.

“We were like the Clampetts; we always came in large numbers,” quipped Walker, who stayed at Caring House while going through outpatient treatment. “It was a party of sorts and through it all we got to know everyone at the cancer center—from the valet staff and cancer center volunteers to the nurses who administered the chemo and my specialists who led the charge—all were helpful, kind and encouraging.”

Walker said the cap and gown were initially for her alone.

“I did it for myself,” she said. “But in the process, it ended up being a happy place for others that day. Even the valet was excited to learn that April 29 was my last day of treatment. People I didn’t even know hugged me and shared their own stories. My graduation ended up being so positive for so many others."

Her oncologist Gretchen Kimmick agreed. "Paige makes me smile," said Kimmick. "When life presented her this hurdle, she faced it with strength in her own way and accepted the help of others in such a positive way. I admire her for enduring her cancer treatment with enthusiasm and a sense of humor."

Walker, who is back at work full-time, said her prognosis is excellent. Ready to get back to the things she loves—first and foremost the farm and her beloved horses— Walker continues to look on the bright side life.

"I like the person I've become because of a challenging diagnosis," she said. "Cancer was just a hiccup. The silver lining has always been right around the corner."

Note: Paige Walker will be one of several Duke cancer patients featured in an upcoming video celebrating survivorship. The video will be shown June 1 at the first-ever Rejuvenate And Educate Supportive Care And Survivorship Day, which will take place at Duke Cancer Center. Walker will also step out Saturday, June 11, with Team Duke Cancer Institute and her own team, RadGrad, for her first-ever Susan G. Komen Race For the Cure 5K. If you would like to donate to her fundraising team, please visit RadGrad.