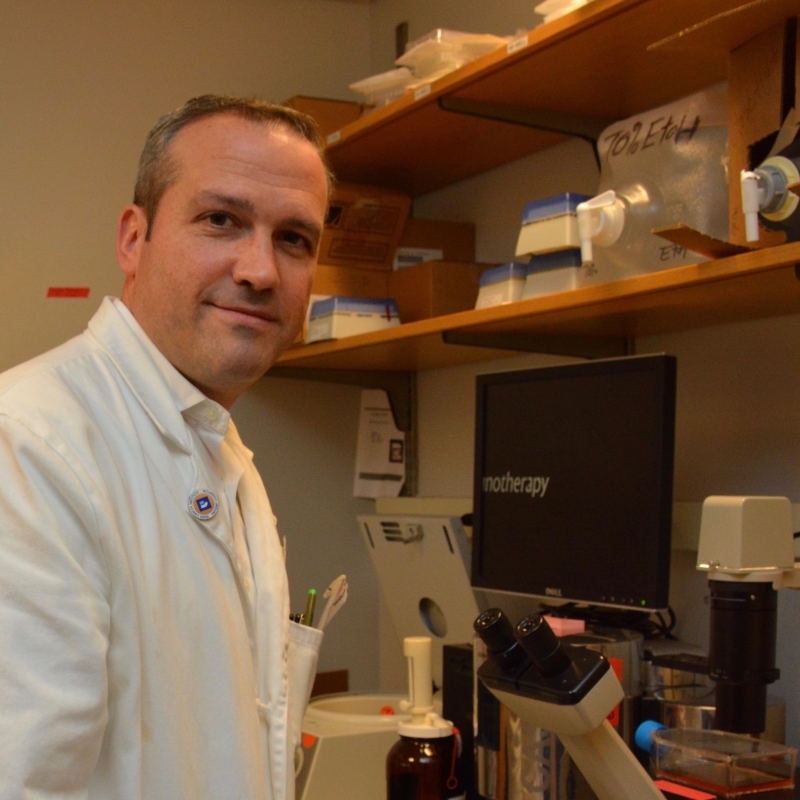 Duke Cancer Institute medical oncologist Brent Hanks, MD, PhD, has been recognized with an ASCI 2019 Young Physician-Scientist Award by the American Society for Clinical Investigation. Hanks is one of 35 “outstanding physician-scientists” being recognized by ASCI nationally and one of two at Duke. The other Duke faculty member is Gentzon Hall, MD, PhD, assistant professor of Medicine in the Division of Nephrology.

“This is a great honor demonstrating the value that Dr. Hanks’ physician-scientist colleagues place on the high quality of his laboratory work designed to understand the mechanisms of resistance to immunotherapy,” said James L. Abbruzzese, MD FACP FASCO DSc(hon), Chief, Division of Medical Oncology, and associate director for Clinical Research at Duke Cancer Institute. “Dr. Hanks’ work has the potential to extend the impact of immunotherapy to diseases that have not yet been able to take advantage of this new treatment modality.”

Nominees were required to have received their first faculty appointment within the last five years and be currently funded by an NIH K or equivalent career-development award (in or outside the United States). Hanks has an NIH K08 grant that focuses on investigating mechanisms by which cancers promote the tolerization of dendritic cells as a strategy to evade the immune system and promote resistance to checkpoint inhibitor immunotherapy, and is also working under five other grants including from the Melanoma Research Alliance, the Alliance for Cancer Gene Therapy, Merck & Co., and Glaxo-Smith Kline.

Hanks has dedicated more than 16 years of his career to research in the fields of tumor immunology and immunotherapy. In addition to managing an independent research lab, he currently sees patients with advanced melanoma and other skin cancers, many of whom have benefitted from immunotherapy treatments.

He received his PhD (2004) and MD (2006) from Baylor College of Medicine and completed his residency in Internal Medicine (2008) and fellowship in Hematology/Oncology (2012), both at Duke. Hanks was named assistant professor in the Department of Medicine, Division of Medical Oncology, in 2012 and assistant professor in the Department of Pharmacology and Cancer Biology in 2018.

“I have a ton of respect for the mission of the ASCI and their support for the development and training of future physician scientists,” said Hanks. “I believe the role of the physician scientist to be critical for advancing medicine and healthcare into the future and this type of support is vital for making sure this challenging career path remains viable.”

The ASCI Young Physician-Scientist awardees will each receive a $500 travel award to attend the 2019 Joint Meeting, April 5-7, in Chicago, and present their work at the ASCI’s Food & Science Evening, on Saturday, April 6.

View a list of AAP and ASCI members from the Duke Department of Medicine.